The sixth Ultraman Brother!
I just started watching the series today. Man, I already like a lot about it. The first episode had a good amount of destruction and unique set ups. So far the monsters are a bit bland, as in they feel like more reptilians being mixed and matched, but I really do dig how the monsters ge two kill and attack people.

This was a show that when I was dipping my toes into the Ultraman pool, I thought I'd hate with it's goofier sensibilities as well as it's general monster aesthetic. I dreaded ever seeing it and considered even skipping it over entirely until I bought a subbed Malaysian bootleg of it way back. I expected to hate it...but it's goofy charm quickly won me over. Taro's easily one of the most entertaining Ultra shows and has some truly classic episodes and one of my favorites. Definitely a show I recommend to newcomers (pick up that set!)
Top

I have the Malay set as well (btw if itis the VBG set, it is not a bootleg, just not approved by TPC, kind of like S!F Ultra Q and Ultraseven). I can't wait for the Mill Creek BRD in a few weeks, just to get a better quality of subtitles. The monsters are definitely more on the goofy side, but the action is fun, and the crossovers with the other Ultra's and their human hosts is amazing fun.
To all you dub preservationists, my friends, you have my eternal thanks

. Never stop what you do, you are amazing!
Top

So far there's been some good standalone episodes, and some episodes with some good monsters. I feel like Taro (and more severely 80) get ignored, but there's already some great monsters and concepts I could see re-appear in future shows. 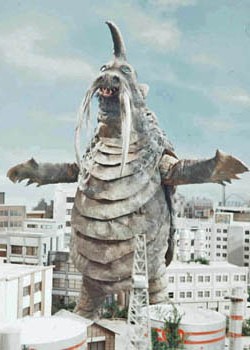 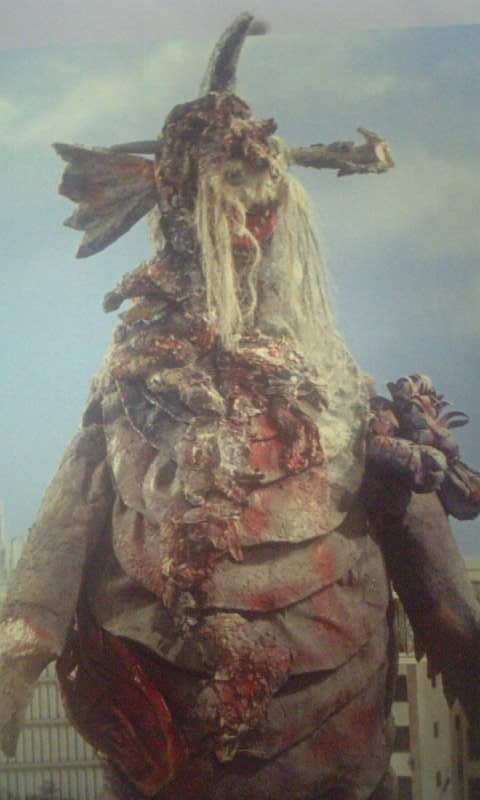 If it wasn't so creepy, I could see this monster re-appearing!
https://ultra.fandom.com/wiki/Depparas#Revived

And even if it's a bit short, I really like the episode with Tagral and Garza! 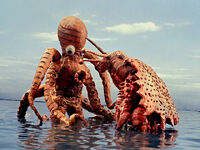 Live King is also underrated, even if silly! 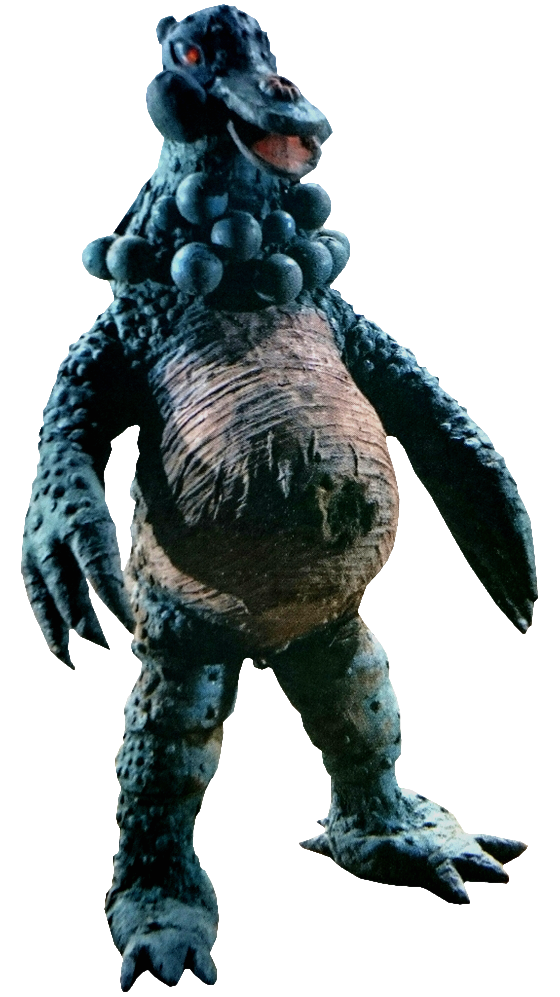 I feel that this series has a lot of memorable monsters that have been underutilized. I'm about 13 episodes in, and I also think the series is really good at having the monsters interact and be physical.
Last edited by LSD Jellyfish on Wed Dec 09, 2020 4:26 pm, edited 1 time in total.

Got my copy of the set and...don't plan to watch it yet since I have Ace to work on. Either though this isn't like jumping around episodes of modern Ultra shows.
But I did play my Mill Creek game where I guess which kaiju/aliens are given a spotlight in the neat little booklet that comes with the set.
I think this was my most accurate guess yet.
Astromons was an easy guess as the first episode monster. Birdon was easy because it pops up and same as Tyrant. Alien Temperor was obvious as well and so was Valky.
So I was so sure Depparas was going to get a spotlight since hey zombie walrus monster that loves ketchup and is the main actor's favorite right? No they picked Mochiron who I guess is a pretty hard contender from the looks of him too.
Top

Show seems to have a hard on with killing dogs.
Rocker, paleo buff, cryptid enthusiast, Dragonball fanatic, and lover of comic book, video game, manga, & anime babes!
Follow me on Twitter, if you dare! https://twitter.com/TLK_1983

Oh no! Well at least I know that ahead of time.
Top

Just got the steelbook set and I think this is my 4th time watching the series since I got hardcore into Ultraman circa 2007. I remember it was Earth Baragon (James Webster) that hooked me up with very low quality, non-subbed versions of the series and it was also my first series I watched in full outside of the original Ultraman, so it does hold a special place in my heart. However, every succeeding viewing has... diminished my like of it. This is especially true since I watched Return of Ultraman and Ace, both series I find to be the best of Showa sequel series alongside 80 (Yes, I like them more than Seven).

I still like Taro's design, and I LOVE a good handful of the monsters. Birdon especially, whom is in my Top 3 favorite kaiju (along with Gudon and Galberos). I also adore Tyrant and Astromons. But the series is just TOO zanny to remain in my high favor like it used to after I became accustomed to Jack and Ace. I do still like it more than Leo, a series I will never understand why it gets so much praise.

I decided to check out the first episode with some seven episodes of Ace left. I really liked it. Much more than Aces first episode. Astromons was really cool and Kintaro did some kick ass stuff like the crane thing or stabbing Astromons with a knife.
I mean...I guess the least he could do since he kinda made the monster right? Created an invasive plant animal monster? No craps given about the puppy either! "Hey you burned my flowers!"
That was cool with the ZAT HQ lifting off. God damn are the uniforms gross!
Top

The vehicles are rather garish too. The Panda looks like a damn clown. Im almost through the first disc and I also noticed half the episodes have featured at least 2 monsters. Best one so far is probably the one about the turtle family. Still bothers me that after all the stuff the UltraVerse has been through everyone is still so skeptical and unwilling to believe. You'd think they'd have learned by now.
Rocker, paleo buff, cryptid enthusiast, Dragonball fanatic, and lover of comic book, video game, manga, & anime babes!
Follow me on Twitter, if you dare! https://twitter.com/TLK_1983

Just finished the Birdon arc and it still remains one of my favorite storylines of the franchise. Such an oddball monster to give this "Ultra Killer" role to, but damn is it great.

Huh so it was Taro that stopped doing the 'monster cut-outs' for the opening credits and switched to showing the attack team base. I thought Leo started doing that first.
The ZAT vehicles are a little weird too.
I like the more stouty/round attack vehicles more. Like Mat Arrow 2. https://www.1999.co.jp/itbig48/10483854.jpg
Or Ultra Hawk #3 https://www.scalemates.com/products/img ... istine.jpg
I guess I kinda like the Zat Condor.
Last edited by daveblackeye15 on Thu Jan 21, 2021 11:21 am, edited 1 time in total.
Top

One thing I've taken note of is how little they make note of his color timer. Its usually flashing at the end of the fight but they don't typically focus on it like the previous series.
Rocker, paleo buff, cryptid enthusiast, Dragonball fanatic, and lover of comic book, video game, manga, & anime babes!
Follow me on Twitter, if you dare! https://twitter.com/TLK_1983

I’ve watched the first five episodes of Ultraman Taro and WOW, this show is weird! I’ve watched a lot of Ultra shows in the past year, including every episode of the first five series, but right off the bat Taro is the weirdest and goofiest that I’ve seen yet. It’s like a cartoon in live-action!

The production design is nuts, from the flying ZAT fortress in the middle of the city to the borderline Dr. Seuss vehicles and the ridiculous ZAT uniforms. Sweet Christmas, the ZAT uniforms! These 1970s defense teams have been rocking some increasingly funky outfits, and I thought the TAC uniforms in Ace were the most garish yet, but ZAT takes the cake.

This is clearly a more kid-targeted show, with the monsters acting more anthropomorphic than ever, eating people onscreen, carrying drama on their own and generally getting a lot of screen time. The lead protagonist, Kotaro Hagashi, acts like an overgrown kid and he’s prone to getting caught up in crazy Looney Tunes situations with the monsters.

It makes sense that this is how the Ultraman franchise would be by mid-1973. Ultraman Ace had already happened, Zone Fighter was airing concurrently, Godzilla vs. Megalon had just opened weeks earlier and it had been two years since the last Gamera movie. Speaking of which, the monsters Kingtortoise and Queentortoise seem to be pretty shameless ripoffs of Gamera. They fly around without jet propulsion and sometimes they even retract into their shells and rapidly spin around in flight, complete with characters likening them to a flying saucer.
- - - - - - - - - - - - - - - - - - - - - - - - - - - - - - - -

nobody in this thread knows what there talking about, including the titanosaurs guy writing an essay on a Godzilla forum

StreamOfKaijuness wrote: ↑Mon Jan 25, 2021 10:58 am Sweet Christmas, the ZAT uniforms! These 1970s defense teams have been rocking some increasingly funky outfits, and I thought the TAC uniforms in Ace were the most garish yet, but ZAT takes the cake.

Just you wait for MAC.
My YouTube Channel: https://www.youtube.com/channel/UCkvrqD ... 56sscldxTw

Nah MAC was a huge improvement uniform wise. They were somewhere between MAT and TAC for me.
Top

StreamOfKaijuness wrote: ↑Mon Jan 25, 2021 10:58 am The lead protagonist, Kotaro Hagashi, acts like an overgrown kid and he’s prone to getting caught up in crazy Looney Tunes situations with the monsters.

Which makes it all the more strange when the same actor plays stone-faced authority figures in the Heisei Godzilla series.
Save All Dubs. Sub All Tohos.

nobody in this thread knows what there talking about, including the titanosaurs guy writing an essay on a Godzilla forum

So , starting around the episodes with Birdon there apparently was a contest to enter drawings of what the Land of Light would look like. I find it hilarious that MC felt the need to add a subtitle indicating this contest is "concluded"

Also it just seems weird to see Missus fully spelled out in subs rather than just "Mrs." In fact, I can't think of a time I've ever seen it fully spelled in anything I've read.
Last edited by o.supreme on Sat Jan 30, 2021 10:39 pm, edited 2 times in total.
To all you dub preservationists, my friends, you have my eternal thanks

. Never stop what you do, you are amazing!
Top
Post Reply
36 posts

AcidTech by ST Software Updated for phpBB3.3 by Ian Bradley