For the discussion of Shin Godzilla, the Godzilla anime trilogy, Godzilla Singular Point and Toho produced and distributed films after 2015. Includes US movies financed by Toho like Detective Pikachu.
Post Reply
11 posts • Page 1 of 1 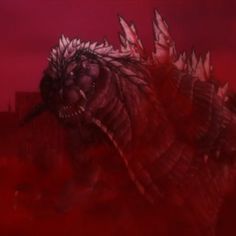 "I thought you were gonna say 'the only problem is that it treats a 90's Kaiju with respect!'

I'll totally admit he could be better design wise, (those freaking tree trunk legs wtf) but i like SP Goji overall! All of his other form's are appealing, he's actually pretty menacing, and the idea of him being so powerful he literally can collapse the fabric of reality is just some.. well, something straight out of an anime and i love it.

Despite all that though, if Season 2 really is going to be a thing, i really hope he show's a bit more personality besides firing his breath and walking forward.

A guy who randomly stumbled upon this place one day, invested much too much time into it, and now appears to be stuck here for all eternity..and strangely enough, i do not regret it!
Top

Gigantis wrote: ↑Mon Aug 09, 2021 2:45 pm Despite all that though, if Season 2 really is going to be a thing, i really hope he show's a bit more personality besides firing his breath and walking forward.

I agree with this, but I hope the same for Toho's future Godzillas in general. Shin and Earth were the same way, and it's getting a bit old for me. Even sprinkles of personality, like G54 growling at the clock tower or experimentally chewing on a train, would go a long way towards making future "apocalyptic destroyer" Godzillas more engaging.

Kaltes-Herzeleid wrote: I'm not saying that literally every movie in the series is a flawless masterpiece, but I wholeheartedly believe that for the most part most Godzilla movies can be enjoyed earnestly and there's more good to decent ones with only a handful being outright unwatchable trash. I'm tired of the "ironic" Godzilla "fans." Like what you like in earnest you stupid skreeonk.

Love this version of Godzilla. The lesser forms are dope with some great designs, and Ultima is awesome in both design and how he actually is in the show. Few Godzillas radiate as much menace and a sense of power as well as Ultima does.
Second in Command & Primary Verifier of the KWCE

I’m still here hoping we’ll get a Godzilla that takes the modern tropes like the evolution stages but adds personality to it all.

My opinion on Ultima? I think he’s neat. His design is different in a good sort of way and his abilities look cool. I just wish we got to see more of him beyond what we got. He got too shrouded in the red mist at points and I didn’t really get to appreciate his scenes completely. Maybe that’s just me, I dunno.

Still. For what he is, I think he’s pretty rad.
Reignited... and hopefully less weird this time around.

Lack of personality, motivation and action within the series kneecaps the skreeonk outta any enjoyment I could have gotten from him. 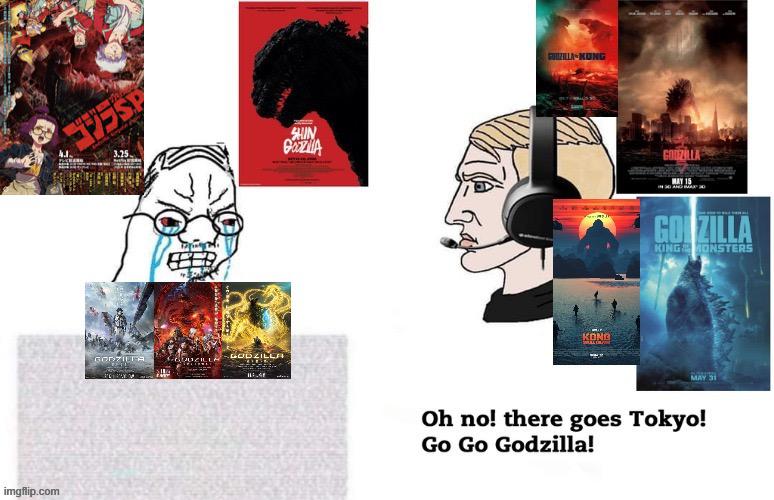 Godzilla Ultima had a lot of missed potential. While the final fight with Jet Jaguar is emotionally satisfying and fun, it doesn't really showcase a world-ending Godzilla as promised. Godzilla T (the Gorosaurus form) introduced a visually striking new power with its flesh tentacles. T also had another cool effect with the "ring" that knocked Black Rodan out of the sky. Then, it owes a lot to Shin-Godzilla and Showa Godzilla, essentially being a hybridization of the two, with

However, to Godzilla Ultima's credit, when it's on screen it feels scary and monstrous. A lot of people have criticized it's shovel-like jaw, calling it ugly, but I think it really adds to it being a monster. The scene of it staring down Yun, and about to fire it's beam, is super intimidating. Despite what others may say, Ultima also appears to be faster than Shin and actually a lot of other Godzillas (Heisei). While we can argue the logistical reasons for it not doing so, it's clear Ultima is a brawler.

Bear in mind, this is not the end of Godzilla Ultima. While Jet Jaguar "tied" with Ultima in the ending of Season 1, I suspect in the next season it will fight Mecha-Godzilla or other stronger monsters that will push it's limits. I'm hoping at that time that Godzilla Ultima is showcased more, and utilizes it's earlier forms more unique abilities to differentiate itself from previous incarnations.

I think every time Godzilla Ultima was on screen, I was really excited and loved every moment of it. I loved it when it evolved from T to U, and there was that great montage of it destroying the tanks and the city. I loved it when it was fighting Manda and later the Rodan. I loved it all. I don't think Godzilla Ultima will be as groundbreaking as something as Shin, MV or GMK, in terms of how Godzilla is portrayed, but it's something that left me wanting to see more and excited.

Love this dude. He’s nothing all that special, but he’s just cool as hell. In design, portrayal, abilities…hell, even his other previous forms are cool!

That being said, I hope Season 2 showcases him some more. I get why he didn’t show up in Season 1 (I believe the show runners said something along the lines of “people will get bored of him if he shows up too much), but now that we have seen Goji, I think it’s time to let loose and really have him take center stage.

Polygon Godzilla done properly with a bit of Shin mixed in.
Top

This was a pretty cool Godzilla and the buildup was awesome, making him seem like some supernatural harbringer. Some of that was kind of wasted when they tried to add science into it with the 'suitable environment" thing (I don't remember how it was worded specifically). Why couldn't he just be a supernatural threat, why was the science aspect necessary? Other than that honestly minor thing, this was a cool Godzilla.
Top

Pretty much what gottatalktothefake said.
Warning: This post was made by a Showa Fan. Take with a grain of salt.
Top
Post Reply
11 posts • Page 1 of 1