A place for users to show off their creativity in the forms of art, music, movies or games.
Post Reply
134 posts

gigan72 wrote:Oh crap I missed your post on the last page. But regardless, you have some serious talent. Love your art, A +, here's $5 and a pat on the back, excuse me while I stew in jealousy.

Umn, I was wondering, could you please draw the Stan Winston Godzilla for me in the same way as the G2000 and Showa KG? 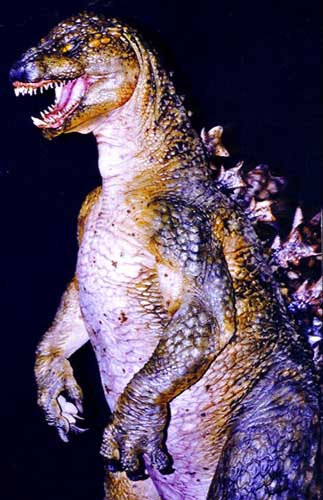 And here's a Steven Universe thing I made yesterday. Messed up Garnet's hair though.
Top

It is fantastic! the sheer detail and scale placement is excellent and very accurate to the design, I don't what to say it's just awesome.

I've already set it as my avatar on AVP-Galaxy.

Added in 3 hours 20 minutes :
I'm asking for a full body image this time:
http://www.kaijukits.com/library/shinze ... d/g91c.jpg
That minus the spines and thin the thighs.
I don't have a signature and I never will.
Top

Sorry I haven't gotten around to that image yet. A lot's happened with school and stuff, but I did make a new song cover, that I'm kinda proud of... Also me and a best friend are developing something.
Spoiler:
Won't get farther than storyboards and voice acting, but basically, yeah... A storyboard-cartoon thing...

Roomies. Scarabee, Satan's son, Jackson, a gay werewolf, Daikaiju, another demon, like Scarabee, Zesty, other weirdo, Miles, the rich snob, and Manager Guy(Barely pictured), the stupid manager that lives in a dumpster behind an apartment building where all of them besides Miles live. He lives in a big mansion. Maybe it's kinda ambitious, but I really want to do this. Already have the script for the first thing done, and will start working on the storyboards soon, along with the v.o. Will post the "character sheets'', if you can call them that, soon.
Added in 10 minutes 12 seconds:

Added in 3 hours 20 minutes :
I'm asking for a full body image this time:
http://www.kaijukits.com/library/shinze ... d/g91c.jpg
That minus the spines and thin the thighs.

Re: Monster Zero's Art and Stuff

Oh my god, I haven't posted here in a LOOOOONG TIME. Sorry about that, though no one really cares.

Spoiler:
So, what's new? Well, I haven't done anything THAT great until recently... And by "recently" I mean since the beginning of the Summer. I made 8" cardboard cut-outs of the 5 main characters from the cartoon called "Roomies" that me and my best friend (He's on Twitter @ScarabeeSmart) want to make. They are gone now; with him.At the same time I made a mixtape of some really shitty music I've made over the past year and made custom labels and everything so it looked like it came straight out of the cartoon. And, obviously, it looks like poop. But, I like the homemade-look to it. It makes sense, at least to me. Two of the main characters are in a band. The CD I made is meant to be one of their CDs. The thing is, the characters are really poor, so they wouldn't be able to afford to record in a studio. Because of that, the music is really bad (Which is honestly my fault) and the CD art looks like something one of the characters would've done.

And now, what I've been working on for the past week:
I've been working on a script. The first draft is complete and it's okay at best. If you wanna see it message me and I'll send it to you.
Spoiler:
Here are some concepts of the characters in the script:

Those are the crazy antagonists.
Here's some random stuff:

Also, here's one of the 5 main characters named Gizzard:
Spoiler:

So, uh, I'm back here now I guess. I've been working on something for a while now, and while it's not at all close to being finished, I suppose I should still say something about it. That "cartoon" I was talking about in my last post has now become a web comic (because holy poop there's no way I could get that to be a cartoon with my lack of skills in the 2D animation arts). I'm sure no one cares at all, but it's something my friend (@ScarabeeSmart on twitter) and I have been wanting to make since we first started hanging out. If you want a little taste, I can DM you some sneak peeks, but for now, here's some concept stuff for the comic:
The first image is one of the characters (She's a cute ghost girl). I'm testing out her opacity.

This next image is a test of what the backgrounds may possibly look like (Just a test, nothing official yet.)

This final image is just another test! Testing out the ghost girl's opacity if she were in a background. It's pretty neat!

And if you have any questions, feel free to ask... like "What's the plot?", "Who are the characters?"... I'll reveal it all in good time... Or in case anyone asks.
Top

Another character. This time it's a villain! Her name's Helena.
Top

Just an update for those who are interested. So, if anyone at all is wondering where the comic will be posted, it'll be posted on Tumblr in a PDF file.
Top