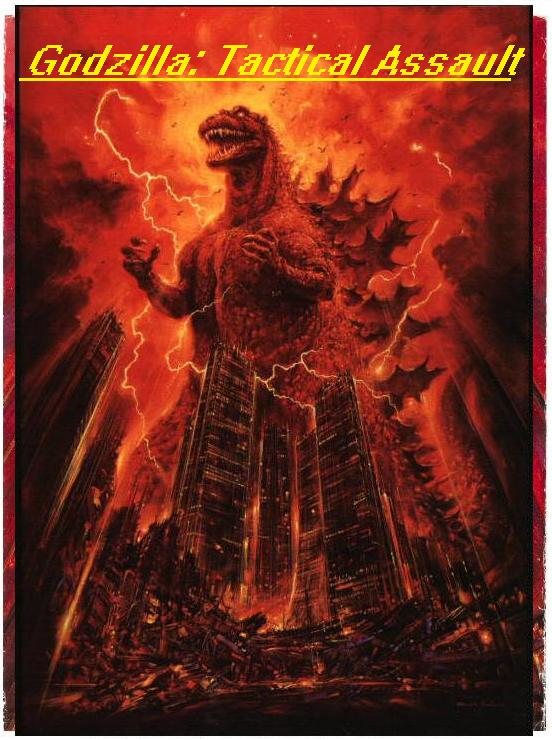 Alright, at the suggestion of Soggynoodles, here is the Godzilla Tactical Assault discussion thread:

Soggynoodles feels, perhaps correctly so, that the members of the TK forum are more comfortable giving feedback in this manner. I’m willing to give it a try.

So, if you have comments, this is the place for them now on. If you have questions about the story, this is the place to ask. I’m pretty open to discussion. You can say pretty much whatever you want here as long as you are respectful to everyone else. I’m even open to criticism so long as it pertains to the story. If it has merit, I’m open to making changes. If it doesn’t have merit, chances are I’m going to tell you why. I would not suggest trolling.

I’m willing to listen to suggestions, whether they be match-ups you’d like to see happen down the pipe, or just general story ideas. Although, if you think your idea is really good and something I’d likely use, I’d prefer a private message to avoid spoilers for other readers. I rather enjoy surprising people.

If you ask a question that would involve a potential spoiler, I probably won’t address it, but other members are welcome to speculate amongst yourselves in that case. I’ll mostly just sit and watch when it comes questions about where the story is going in the future. That, or just give a vague answer that doesn’t give too much away.

In fact, I’m going to try to stay out of the discussion here altogether unless someone has a direct question for me. I think it’s more fun when answers are not given away by an author. Half of the fun in a story are the mysteries and unanswered questions and guessing what is going to happen without certainty.

On the other hand, if you have questions about stuff I have already done and the reasons for it, I’m absolutely open to discussing. I usually have method to my madness.

On the flip side, if there are things you like about the story, I want to hear about them. Because that is about the only thing that motivates my writing and keeps this project going. I’m only willing to put in the work as long as I feel like people are appreciating the story and getting some enjoyment out of it.

(I was writing up a post, but the forum quit on me

I've been checking in periodically to see what's new, so I should probably say something.

The storytelling and characterization on their own are good, and the realistic approach to kaiju appearing has been fantastic. In particular, Marcus's touching family life with Shauna complemented the full-on horror with the Shockirus (if I'm not mistaken) very well. The miniaturework (is that a real word?) helps emphasize the scale of what happens. I'd gripe about typos, but those get cleaned up fairly quickly.

Pretty much everything else I have to say would just be me thinking aloud about alternate history (particularly about South America, monarchist Yugoslavia, and the Middle East, since with a hot Cold War filling in for WW2, there's no global tensions to drive proxy wars and instability, the lingering of imperialism in Asia (which the Red Bamboo seem to be a consequence of) aside), but one thing I should probably throw out there is: what countermeasures are countries making in the event that monsters come back? These "Archimedes" people make me very curious, and they strike me as a similar institution to Monarch, but more militarized.

Glad you made this, Ashrams.

I love this story. I enjoy the hell out of the more grounded take on a post WW2 world suddenly being introduced to kaiju with the sheer amount of effort you put in from setting up the models and stating up the kaiju. It's by far the realest kaiju project I've seen on these fourms in years.

Don't stop now, because I'm thinking it's just starting to get good.

Ok, I want to get this out of the way before I forget: Snoggynoddles, that Jet Jaguar picture on your profile is killing it man. I actually laughed out loud when I realized what it was. Good stuff. Gave me a laugh I really needed.

With that said, thank both you and ConvergeTakedown for the feedback. I appreciate you guys putting in the effort and I can tell that you really do like what I’m doing. It makes a great deal of difference to me.

I totally agree, typos are one of my biggest enemies. I’m not sure if it’s true for everyone, but what I see in my mind when I’m reading/writing vs what is actually there on the screen aren’t always the same thing. I have to read things I’ve written over and over again to ensure what I’m trying is actually what I’m trying to get across. I try to correct grammar and typos whenever I see them, but I’m positive they still slip through sometimes. I was not an English major in college and it absolutely shows, but I hope my little mess ups are not too distracting.

Anyways, yes. Reinhardt is still alive and will make a return to the story. I don’t think it is too “spoilery” to say it, but I wrote him with a very specific purpose in mind and we are going to get to that reason pretty soon. Stay tooned for that.

Also, thanks for making me think about some of those other locations and political situations. Eventually the story is going to find it’s way to South America, and when it does, some of those Cold War era types of plots/politics might surface. The Russians and Chinese were defeated, but that doesn’t mean they’ll necessarily just roll over for the Americans.

I’m trying to write a story that is more grounded in reality, and that can be a tough balancing act considering the subject matter, but I think it can be done. I always try to press home the human element in the story and the consequences of giant monster rampages. I try to write exciting action scenes that are fun for the average Godzilla fan while keeping the regular story elements interesting when giant monsters aren’t stomping their way through the miniature sets. I think the mundane sections help to contrast the more chaotic. The way I see it, you can’t appreciate the highs without the lows. Half the fun of a roller coaster is building the tension on the way to the top before the big drop. And believe me, we are headed for a big drop.

I am in fact at this moment still working on chapter 20. I finished the first draft last weekend and I got maybe 1/5 the way through the second draft tonight. After that is complete, I have to read through it again and edit. When that is complete, I’ll move on to miniature work and principal photography. Then photo editing. Then the final read through. So I still have a little ways to go in the process. Guessing It’ll be maybe another two weeks. Depends on how hard I feel like working on it.

Once it’s all done, I’ll look and see how things are coming along here by that point. Today was a move in the right direction.

I didn’t say it before at the top and I probably should have. While my more impressive miniature work is yet to come, if anyone is curious about a particular building, military unit, or piece of terrain featured in my photos, I’m more than happy to explain either how I made it or where I bought it. Quite a lot of the miniature buildings I made myself out of paper and it’s really not all that hard to replicate them in you want to build a city of your own. It doesn’t take a high level of skill, just a little time and patience. Also a little ink and card stock paper.

It probably hasn’t come across in the black and white photos, but once the timeline has progressed far enough to get into the ‘color age’ it will be easier to notice the ocean, grass, and sky I use for my landscapes. Those are also very easy to replicate if someone is interested in that.

My main point: Questions don’t have to be limited to just the story. I don’t mind explaining the crafty stuff if that is your interest.
Last edited by Ashram52 on Thu Mar 18, 2021 8:26 pm, edited 2 times in total.
Custom Godzilla Modeler
Top

Ok, just so you all know, Chapter 20 is complete. All that’s left is a little photo editing that I’m wrapping up on now. However, I’m going to need one more reasonably good comment before I’ll post it here.

It's not much, but since it's been in my head for a while - how do you keep the paper buildings from falling over or getting nudged around? They don't look too top-heavy, but from how close they are together in the city scenes, I'd be surprised if your figurines and miniatures/their stands (for the flying ones) have never touched them by accident at least once. Do they have some kind of foundation or frame, or do you just have to be really careful?
Top

ConvergeTakedown wrote: ↑Sun Apr 11, 2021 12:36 pm It's not much, but since it's been in my head for a while - how do you keep the paper buildings from falling over or getting nudged around? They don't look too top-heavy, but from how close they are together in the city scenes, I'd be surprised if your figurines and miniatures/their stands (for the flying ones) have never touched them by accident at least once. Do they have some kind of foundation or frame, or do you just have to be really careful?

Convergetakedown, you just bought the whole forum Chapter 20. You have my thanks and theirs. I will be posting it just as soon I can get my stuff loaded. Most likely within the next hour.

As to your question: No special secret. For the most part I just have to be very careful. And even then, things do still get nudged. In particular when I am actively trying to shoot a scene and moving around figures and planes, etc. In those cases I just have to move them back. And that can be a little bit of a pain, I’m usually leaning over the table, because it’s 4 feet wide and 8 feet long, so if I’m being careless I can knock other things over trying to fix something.

Even if I breathe too hard things can slide out of place. So it takes some discipline setting up a scene. A large city, as you will seen in chapter 20, usually takes 2-3 hours to set up. I spent a good chuck of my Saturday morning setting up Tokyo and snapping shots for chapter 20.

To everybody else: If you enjoy chapter 20 and want more story, be sure to let me know in the comments.
Custom Godzilla Modeler
Top
Post Reply
7 posts • Page 1 of 1