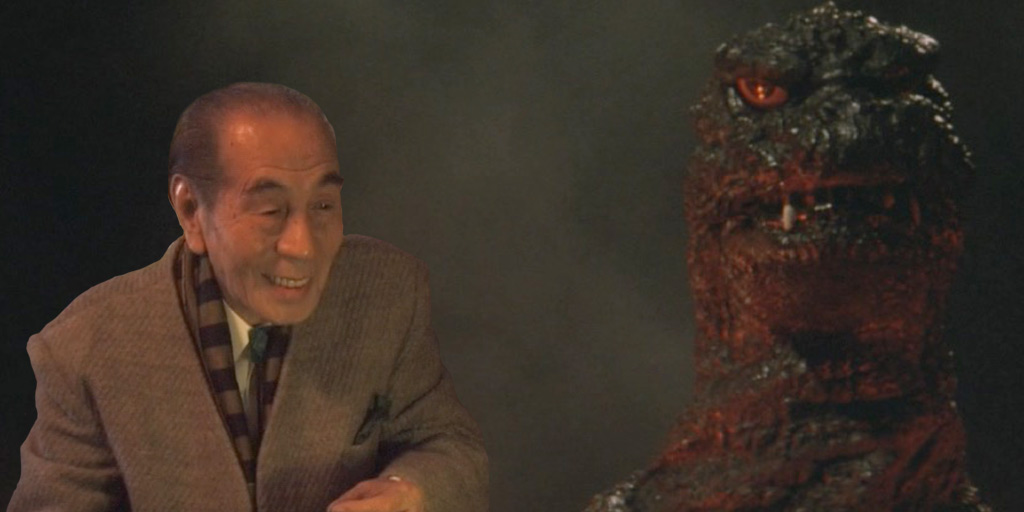 Of the many stories which have been said about Akira Ifukube, one of the most widespread and admittedly endearing examples concerns the manner in which the composer supposedly rejected the opportunity to score 1984’s The Return of Godzilla. As the tale goes, Ifukube, after receiving Toho’s offer to write music for the aforementioned 30th anniversary reboot, expressed displeasure with some of the changes being made to the titular character, namely the decision to increase Godzilla’s height from 50 to 80 meters; and in refusing the assignment, he’s reported to have said: “I do not write music for 80-meter monsters.”

A wonderful anecdote, one that’s been reiterated in numerous books, magazines, web articles, forums, etc. over the last thirty-some years—and one I seriously question in terms of its validity. Now, I personally love stories about artists turning down work via snark-laden comments (I’m rather fond of Noël Coward allegedly refusing the eponymous part in Dr. No with, “Dr. No? No! No! No!”), but this supposed statement of Ifukube’s strikes me as little more than an urban legend: something fun to share in jest, but not to be taken serious. It’s been my stance for a long time now that if Ifukube uttered these words at all, he used them ironically; and my guts compel me to believe he never used them in the first place.

I cannot claim expertise on Ifukube’s life and career, but I have read/watched a sizable number of post-1984 interviews featuring the composer—not one of which contain quibbles on his part regarding Godzilla’s stature here or in any of the later Heisei movies. Also: having never come across the supposed quotation in any Japanese source, I’ve been inclined to believe its propagation occurred mostly here in the west. And considering it was believed for many decades on this side of the Pacific that Godzilla emerged victorious in the Japanese ending of King Kong vs. Godzilla (1962), my willingness to accept yet another unsubstantiated rumor regarding this franchise resides about three notches beneath the tier labeled “skeptical.”

And so, in the interest of research, I thought it would be fun to get to the bottom of this “I do not write music for 80-meter monsters!” yarn: pinpoint its origins, consult with people with more knowledge on the matter than I possess, and try and figure out what’s what. 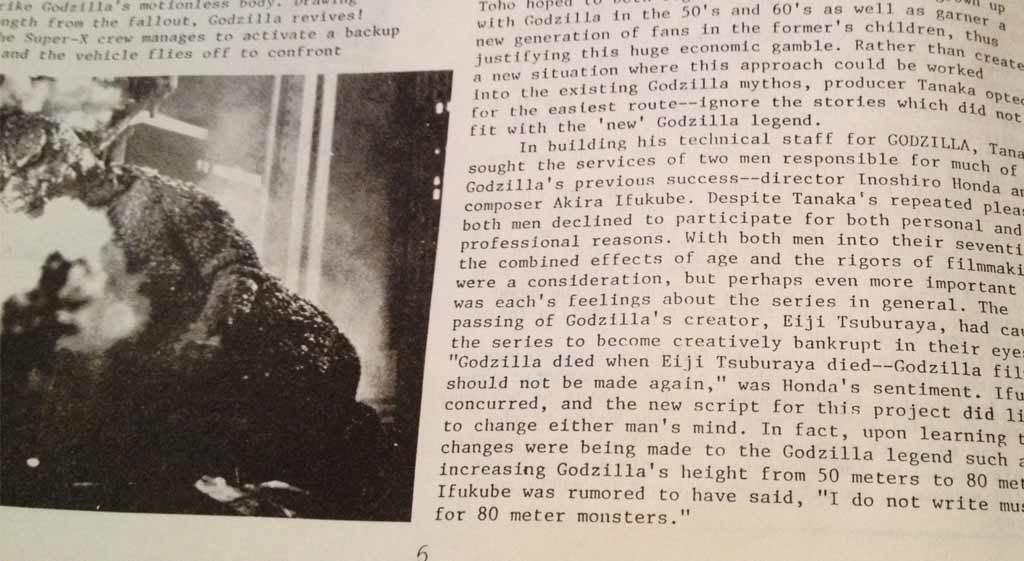 In carrying out my detective work, I first amassed every English language book, magazine, etc. in my collection that contains the infamous Akira Ifukube “quote,” going through each of them for reference. I also scoured the world wide web for additional clues. From there, it was a matter of locating mentions that came with citations and bibliographies, and searching through my archives for what I hoped would end up being the very first instance of this quote appearing in the English-speaking world. Following a session of backtracking citations, I arrived at Issue #7 of Ed Godziszewski’s magazine Japanese Giants.

And now, a clarification: Godziszewski’s magazine may have been the first time this anecdote was shared stateside, but it was not the avenue through which the story in question came to be passed off as “the truth.” Please pay close attention to the exact verbiage in which this collection of words was first reported.

In detailing pre-production of the 1984 Godzilla movie, Godziszewski specified that Ifukube was offered the chance to score the film but turned it down and that (again, please read this verbatim) “upon learning that changes were being made to the Godzilla legend such as increasing Godzilla’s height from 50 to 80 meters, Ifukube was rumored to have said, ‘I do not write music for 80 meter monsters.’”

Notice that key word. “…rumored to have said…”

When I started planning this Urban Legends article, I reached out to Godziszewski for further details as to where he heard the story and what he’s gathered on it in the thirty-some years since. His response:

“[The quote] was something that I had heard from a couple of friends in Japan during my visit there in January 1985, to see the new Godzilla film. This was well before I was fortunate enough to meet Mr. Ifukube, so it was not something I got first-hand. When I used it, I qualified it as something he was rumored to have said. It was certainly an amusing way to explain his absence from this film. Not having met him at the time, I couldn’t say if he had a wry sense of humor and said this as a way to dismiss the endless badgering from Toho’s people who were asking him to work on Godzilla again. It seemed believable in that vein, but I never took that statement terribly seriously. By chance, during a recent trip to Japan, I happened to run into one of the people who I heard this from, and he told me that “it was just a joke.” Given the way this rumor has sort of morphed into something quoted as fact in some circles, I now regret that I used it at all in the article.”

And there we have it. Even though Godziszewski, from the start, unambiguously classified “I do not write music for 80-meter monsters!” as a rumor in Issue #7 of Japanese Giants, some of us who’ve passed the story along in the decades since have forgotten to repeat said clarification. The subsequent circulation of this infamous quote merely exemplifies what sometimes happens in distributing the research of others: a rumor initially clarified as a rumor, eventually repeated and repeated and repeated until it began transmuting into a “fact.” A mistake on our part since the “fact” ended up being “just a joke.”

As for Ifukube’s not taking part in the 1984 film: that, too, can be explained with postulations far more plausible than an upsurge in Godzilla’s height. To gain insight into what Ifukube was up to at the time of this film, I consulted Erik Homenick, webmaster of akiraifukube.org, who explicated with the following:

“I supposed that the refusal comment attributed to Ifukube had to be false because, in the 1980s, he did not compose any film music at all—not for Godzilla, not for anything. Ifukube had retired from the world of film music and at the time was focused on his career as a professor of composition at the Tokyo College of Music. Even his concert output in the 1980s was comparatively meager; his overriding priorities were in education. Long story short, Akira Ifukube did not compose music for The Return of Godzilla not because of any objection to Godzilla’s size, but because he was funneling his energies elsewhere.”

As history demonstrates, Akira Ifukube eventually returned to the franchise, scoring 1991’s Godzilla vs. King Ghidorah, a film in which the radioactive behemoth’s height was increased further still, to a whopping—and utterly ridiculous—100 meters. In his 1996 interview with Steve Ryfle, Ifukube cited familial persuasion and Toho’s use of his music in Godzilla vs. Biollante (1989) as the factors behind his return. “I did not accept the assignment for Godzilla vs. Biollante, but after the film was released, my daughter pointed out they had used some of my music in the film. Also, they had made some of my music into a rock theme, and I did not like that! So, my daughter encouraged me to accept the next Godzilla movie so I would have some control over how my music was used.”

When all’s said and done, the claim of Ifukube commenting “I do not write music for 80-meter monsters!” certainly makes for a humorous conversation piece, but it doesn’t appear to be true at all. And with that, another dubious story bites the dust.