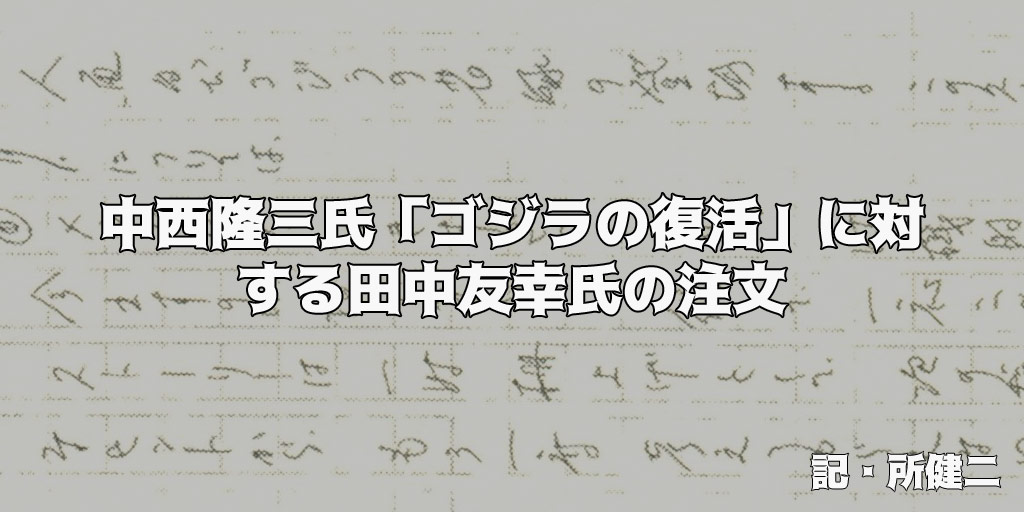 Though it ends abruptly, translated below is the memo Tomoyuki Tanaka’s Order for Ryuzo Nakanishi: Resurrection of Godzilla, as seen in the Japanese publication “Godzilla” Toho Special Effects Unpublished Material Archive: Producer Tomoyuki Tanaka and His Era (ISBN: 9784048544658).

A follow-up to Ryuzo Nakanishi’s Resurrection of Godzilla (2nd Draft), this memo from producer Tomoyuki Tanaka – written by his subordinate, Kenji Tokoro – describes an “adult fairytale” with mystery, mermaids, and two Godzillas. Nakanishi, a screenwriter who has worked on dozens of movies including The War in Space (1977), would eventually submit a 3rd draft for a “Resurrection of Godzilla” before Tanaka himself penned his own story, with Tanaka’s serving as the base for the finalized 1984 movie.

As usual, VERY special thanks to Noah Oskow for the following translation!

〇 Regarding this story, where a mermaid emerges to become Godzilla’s bride:

〇 We’ve relied on Mechagodzilla too much, and in terms of timing, to use him now would be to our detriment. It follows that that we should at least shelve that story for the time being. Rather, could you reconsider a story from the following hints?

Just like when Mothra was at Infant Island… what if we say that the female Godzilla is like a guardian deity for this kingdom? This is where the mermaids, like something out of a fairytale, would be involved…

In short, we’d have there be the volcanic island discussed above, and have the kingdom exist in the caverns underneath it.

We could make this island be Attu Island. Attu Island is volcanic, and it might be good if we set it up so that two or three of the Japanese troops who fought on the island, all of whom were thought to have been killed in honorable battle fighting to the last man, had in fact been living in this underground kingdom.

Could we think up the composition of this story in terms of how the female Godzilla and male Godzilla become entangled?

For the introduction, we can use an observation ship beset by storms or any such thing, and then they end up in a spot they hadn’t planned on being, with their being wrecked when caught up in the currents of a maelstrom.

Sent to investigate the whereabouts of the ship, a reconnaissance team is met with the same fate, caught up in the whirlpool and sucked down to discover the underground kingdom where mermaids and others reside, as well as the female Godzilla, awoken from her slumber.

From here, she and the male Godzilla come together, and the two go on a monumental rampage. With even one of these monsters being difficult to handle, having two of them running amok will be a true disaster…

Could we agree upon doing this sort of “adult fairytale” story?

With this directive, I’d like us gather up our reference data in order to polish up this idea, and by somehow arranging all this with Fukuda and Tokoro, we can invite Ryuzo Nakanishi to where we’ve gathered up all that data, consult with him, and get all of this together.

However, if we set this all in an underground kingdom, we won’t be able to film on location and the whole thing will likely be quite difficult to put together, so I’d like to go around and hear the opinions of a variety of people.

A: Fukuda
B: Nakanishi

How does this group feel about showing Godzilla in such a light?

〇 One day in on March of 197X, the news came that upon the outbreak of Typhoon no. 3, the massive storm had taken a course not towards the continent but rather had made a beeline for the Japanese home islands – a trajectory that was quite strange for a spring typhoon.

Additionally, the typhoon briefly halted on the south of Minami-Tori-shima, gained in force, and then headed north-northwest.

〇 Just around this time, the oceanic investigation ship “Oyashio” had finished up a survey of the South Pacific and was en route to Japan, returning home, and was navigating the waters around Minami-Tori-shima.

Following orders to “take refuge immediately in the nearest harbor,” the Oyashio moved at full-speed ahead. However, in the area of the ocean between Minami-Tori-Shima and Iwo Jima…

〇 The typhoon, as if waiting for the Oyashio to disappear, then progressed north-northwest, making landfall in Japan. The typhoon cut northwest from the Izu Peninsula across Japan, disappearing into the Sea of Japan.

〇 Although the damage from the typhoon was worse than expected, the fact of the whirlpool which the typhoon had caught the Oyasho up in remained a mystery. Moreover, the Oyashio, within the so-called Devil’s Sea, had disappeared without a single trace.

〇 Nishikawa of the Institute of Oceanology moved to cooperate with the Japanese Maritime Safety Agency, whose duty it was to investigate the mystery of the maelstrom, and the two groups began operating in earnest. The results of this were:

1: They were unable to locate a single body nor any trace of the victims.

2: There was no sign of fuel or heavy oil.

3: Remnants of the ship revealed not a single directional pattern, nor four directions, but instead had traces of power being directed in eight directions.

4: The report that a great swirling something had been generated in this region of the seas was the first of its kind since the Japanese Meteorological Agency had been formed.

〇 Although Nishikawa believed that that whirlpool was likely an aberration caused by Typhoon no. 3, even after running a variety of tests, the association between the two was still unclear.

〇 Catching a ride on the Maritime Safety Agency ship Kaiyo-maru 7, Nishikawa headed out on an August day to investigate that region of the seas.

〇 In the oceanic region of the Devil’s Sea, the Kaiyo-maru 7 found itself being sucked into the suddenly emerging whirlpool.

〇 Really, the place was exactly like the sort of large cave one hears about; a space lit like the midnight sun, where ferns or other cryptogams might be growing. It appeared like the inside of a cavern, deep underground. There were no animals to be seen.

〇 Nishikawa moved towards the recesses of one of the grottos. Looking into a small stagnant pool, he spotted a mermaid. No sooner had she seen him, she slipped into the depths of the lake, disappearing. Could it have been a hallucination?

〇 Nishikawa began climbing up what seemed to be a cliff face, although it felt strangely soft for all that; up and up he went, and as he finally arrived at a brighter area, he found himself coming out into the open air. This soft form which Nishikawa had climbed up was, in other words, the slumbering body of the female Godzilla.

〇 Of course, Nishikawa knew nothing of this fact.

〇 Nishikawa, having emerged onto the surface, was saved by a fishing boat that was passing nearby.

〇 The isle had been the dormant volcano of the uninhabited XX Island.

〇 News of Nishikawa’s miraculous return to the world of the living spread across the globe. Additionally, interest in his tale of mermaids had reached a peak.

〇 Before an official investigatory team could be sent out, a group had already headed out towards XX Island for the sake of tabloid curiosity, gaining the ire of the proper establishment.

〇 While that group was cavorting about on the isle, once again a typhoon began to rage, damaging the island.

〇 Just then, Godzilla launched an attack on the island.

〇 In the aftermath of the typhoon, the entire promotional investigatory team had been wiped out, and in their place were Godzilla and the female Godzilla, living side-by-side.

〇 The American 7th Fleet was dispatched, bringing about a titanic battle with Godzilla. 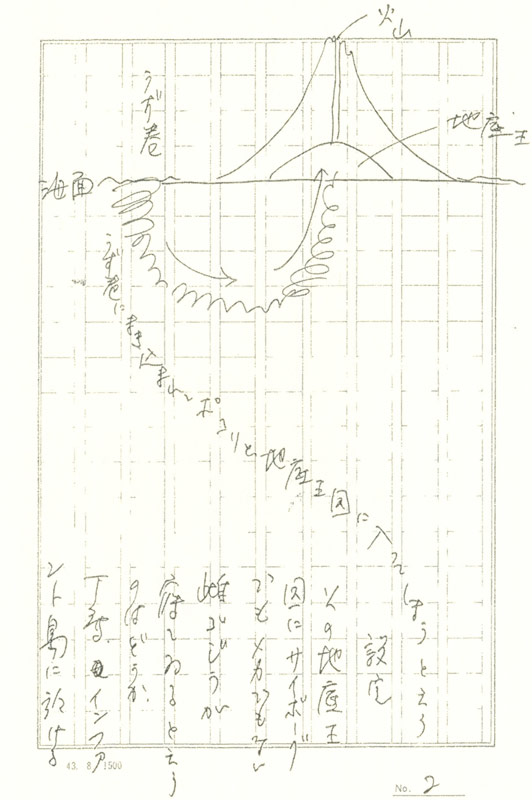