One of the most commercially successful directors in Japanese film history, Ishiro Honda has long been the subject of both extreme ridicule and glowing praise. For some he was merely a name attached to low-rent junk for children; for others an unfairly maligned visionary worthy of careful consideration. While acknowledging Honda’s historical importance in his 2008 book A Critical Handbook of Japanese Film Directors: From the Silent Era to the Present Day, author Alexander Jacoby nonetheless dismissed him as a rather “pedestrian” filmmaker whose themes were more superficial than searing and who remains known simply for overseeing films made famous by Eiji Tsuburaya’s special effects. On the other hand, Japanese historian Inuhiko Yomota’s thoughtful essay “The Menace from the South Seas: Honda Ishiro’s Godzilla” champions the maker of Godzilla (1954), Matango (1963), and Atragon (1963) as “equally deserving of serious discussion” as his close friend Akira Kurosawa.

Myself, I’m not an ardent member of either camp. As I’ve written elsewhere, Honda, to my mind, made some very fine movies, many of which valiantly addressed social issues and thus warrant the serious discussion called for by Yomota; and I am certainly thankful for Steve Ryfle and Ed Godziszewski’s Ishiro Honda: A Life in Film, from Godzilla to Kurosawa for contributing to this line of thought. (Their intensely researched biography also served as the primary source of information for this article.) At the same time, the drastically uneven quality of Honda’s work has always distanced me from the camp declaring him one of Japan’s great directors. And I continue to find issue with his handling of certain types of sequences (namely action)—plus the hit-and-miss ratio in which he dramatized subjects—and while he declared himself someone uninterested in style nonetheless feel some of his films would’ve benefited from a director able to wield good-looking shots into a kinetic whole.

That said, there are wonderful movies within the career under discussion (a few of which don’t feature monsters or aliens). Given the right script and sequences within his range, Honda could turn out films—at least individual sequences—of tremendous power. And any career with the lasting pop cultural impact of his is worth talking about. 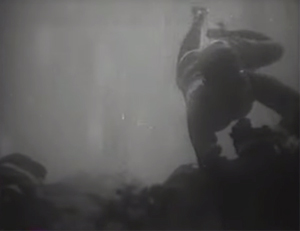 Ishiro Honda’s directorial career began with Ise-Shima (1949), a nineteen-minute bunka eiga (“culture film”) documenting the history and people of eastern Mie Prefecture. The film was produced by Toho Educational Film Division, which in the immediate postwar years specialized in short subjects typically focusing on life and tourism in Japan, sometimes exhibited internationally but most often shown in Japanese schools. As a visual document, Ise-Shima is efficient—skillfully photographed and cleverly assembled in post-production by Honda. In one particularly immersive sequence, the director collects footage of different groups of people walking through different parts of Mie—across a field, over a bridge, upon a hillcrest, through a coastal street (the latter framed through a street merchant’s door)—and splices them together with succinct rhythm, jumping from one part of the prefecture to the next, using the subjects’ common action to cinematically link the shots.

Most impressive, however, is an absorbing six-minute scene following a group of ama (“sea women,” female pearl divers) in their hunt for abalone and shellfish. Underwater photography had not been successfully achieved in 1940s Japan, so the first-time director consulted a technician friend to build a metal-and-glass container for his camera. Thanks to this protective construct, Honda’s crew could submerge themselves into the depths with the divers and achieve marine footage so breathtaking that a European distributor picked up Ise-Shima for screenings in the Occident. “The fact that Ise-Shima got sold opened up my way to theatrical features,” Honda recalled. And the film itself is so absorbing that one is left sad realizing Honda’s second documentary—1949’s Story of a Co-op—has seemingly been lost to the ravages of time.

In one brief moment from Ise-Shima, Honda visually contrasted the rustic lives of Mie Prefecture’s working-class people against the hustle and bustle of modernized, cosmopolitan Japan. For his first dramatic feature, The Blue Pearl (1951), the director revisited and expanded upon this subject—also bringing back the Mie setting, the focus on ama divers, and his groundbreaking undersea photography. Yukiko Shimazaki stars as an ama residing in an island village entrenched with feudal traditions and leeriness toward outsiders (read: western-influenced Japanese). While her family wishes her to marry a local, she instead falls in love with the new schoolteacher (a visitor from Tokyo played by Ryo Ikebe) and winds up competing for his affections with a fellow ama (Yuriko Hamada) who herself has become westernized after a few years living in Tokyo.

The Blue Pearl is a modestly entertaining film held back somewhat by rough execution. The romance around which the story revolves comes up short thanks to a stiff, mechanical performance from Ryo Ikebe—outshone here by Takashi Shimura (demonstrating his signature talent of making great acting look easy) and by Shimazaki, passionate and soulful as the ama caught in the clash between tradition and modernity. (An amusing historical footnote. Later that same year, the actress would play the spiritual opposite of this character: enacting a flirtatious, westernized girl in Mikio Naruse’s Repast.) Honda’s direction likewise is scattershot, boasting a few wonderful moments (a romantic scene set in a lighthouse during a thunderstorm ranks with the best material in his oeuvre) as well as a few clumsy ones (a choppily staged and edited sequence of Shimazaki visiting Ikebe as he paints the coast). Faults and all, though, the movie is charming and the underwater photography, like in Ise-Shima, thoroughly immersive.

Although his efforts go uncredited, Eiji Tsuburaya shot an impressive landslide sequence for the climax of this melodrama about three researchers trying to save a mountain village from disaster. And this historical footnote—the first teaming of Honda and Tsuburaya—is more interesting than the passionless love quadrangle that unfortunately consumes much of the film’s actual run time. All four protagonists are too milquetoast to be very interesting, and one of them is given so little screen time that she never develops into anything resembling a character.

Honda’s direction is more confident than in The Blue Pearl, but aside from Tsuburaya’s work and some interesting scenes of geologists conducting survey work, the picture has little in the way of compelling moments. A merely tolerable programmer that needed more of Yasushi Akutagawa’s riveting score (and more of Takashi Shimura, who steals his one brief scene early on and is sorely missed thereafter).

In his book The Emperor and the Wolf: The Lives and Films of Akira Kurosawa and Toshiro Mifune, film historian Stuart Galbraith IV speculates the reason Mifune was able to appear as a fighter pilot in this pacifistic war movie was because Kurosawa had been hospitalized in April 1953—thereby putting the already extended production of Seven Samurai (1954) on hiatus. Whatever the reason, the actor is squandered on an unmemorable part, showing off a mere fraction of his usual screen presence and charisma. And yet, he prevails as one of the film’s more interesting qualities, in particular outshining the normally reliable Denjiro Okochi and his somnambulistic performance as Admiral Isoroko Yamamoto.

Eagle of the Pacific points the way to what’d become a recurring issue with many of Honda’s science fiction movies: excessive scenes of people sitting around tables talking, photographed in the most pedestrian manner imaginable. In The Skin of the South, Honda and cinematographer Kiyoe Kawamura managed an engaging town meeting scene with spirited performances and the camera rotating in the center of a room, turning constantly from one speaker to the next. By contrast, the conversation scenes in Eagle of the Pacific (photographed by Kazuo Yamada) are mind-numbingly flat in their staging, and most of the actors—even Takashi Shimura—appear more bored than anything else. The docudrama approach Honda assumes finds meager pockets of interest only in cutaways to civilians reacting to Japan’s mounting international tension—which in the second half disappear in favor of flashy yet impersonal battle sequences (a composite of new and recycled effects from Tsuburaya as well as jarringly grainy stock footage of actual battles).

After the financial success of Eagle of the Pacific (Toho’s first postwar film to gross 100 million yen, per some sources), the front office requested another war picture from Honda; and despite reservations from his wife—who questioned whether two consecutive pictures about combat would be wise for her veteran husband—the director went ahead with Farewell, Rabaul, a wholly fictional melodrama about Japanese pilots stationed in Papua-New Guinea toward the end of World War II. While not scoring as high profits as its predecessor, it ended up being a marked improvement over Eagle of the Pacific: featuring stronger direction, remarkable black-and-white cinematography by Kazuo Yamada (the use of shadows on faces in close-up is particularly impressive), and confident performances all around.

Ryo Ikebe shines as a fighter pilot who begins the story cold-heartedly preaching victory or death in the attempt to inadequately trained comrades. Following the capture of an ace American pilot (Bob Booth) pointing out in the ineffectiveness of good planes in the hands of unqualified pilots and how quickly Japan’s disregard for human life is pushing them towards defeat, Ikebe discovers his humanity and dejectedly watches as his friends are wiped out in enemy attacks. That most tokusatsu fans know Ikebe for his lifeless performances in science fiction is unfortunate; here, as elsewhere in his non-genre career, he proves himself a wonderfully capable actor.

Farewell Rabaul is particularly effective in its first hour, losing steam in a final act that places too much emphasis on a tepid relationship between Ikebe and a nurse played by Mariko Okada. (The more interesting male-female dynamic concerns another pilot—Akihiko Hirata, in his first role for Honda—and an exotic native girl fervently enacted by Akemi Negishi.) Hiroaki Hagiwara’s score is also, at times, comically distracting. But the picture is very well-made, supported by Eiji Tsuburaya’s aerial combat scenes, and shows Ishiro Honda coming into his own as a craftsman. And later that same year, his interests in war and the human condition would reach their pinnacle, in what ended up being the director’s most iconic movie.

Writing about the original Godzilla is a somewhat daunting task: what can be said about this film that hasn’t been said numerous times already? So I ask the readers’ tolerance of what might seem to be an inappropriately short review. Looking back on my many viewings of Honda’s masterpiece, I remain haunted by its powerful images, disturbed by its gut-wrenching scenes of human suffering, moved by its statement against the proliferation of nuclear weapons, and fascinated by the manner in which Honda and co-screenwriter Takeo Murata rework creature feature formulas for symbolic effect (i.e. the scientist who wants to keep the monster alive in spite of the danger it presents—albeit not for “scientific knowledge” as tends to be motive in American films but rather because Takashi Shimura’s Dr. Yamane hopes that uncovering Godzilla’s ability to survive radiation exposure would benefit mankind).

I could write for pages about the 1954 classic but would only regurgitate what’s been said ad infinitum. So I’ll simply close with this: Godzilla is more than worthy of its reputation as one of the greatest monster movies ever made—because it is so much more than a monster movie.

THIS ARTICLE IS CURRENTLY UNDER CONSTRUCTION. NEW REVIEWS WILL BE ADDED IN THE FUTURE.

Galbraith, Stuart, IV. The Emperor and the Wolf: The Lives and Films of Akira Kurosawa and Toshiro Mifune. New York: Faber & Faber, 2002