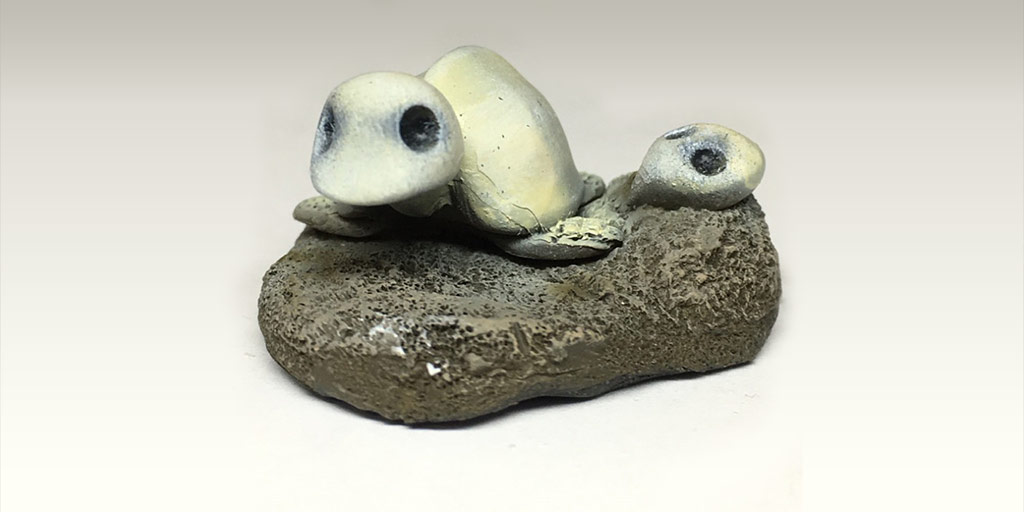 In early 2009, Toho Kingdom’s very own Chris Mirjahangir coined the name of a rather unusual creature he was about to voice in a then upcoming toon. Often dismissed as a skeleton, a bizarre colorless sea turtle can be located in Ishiro Honda‘s classic Mothra vs. Godzilla (1964). Although I gave it the rather uncatchy name “Kame no Gaikotsu” (Japanese for “Turtle’s Skeleton”), Chris suggested the moniker that stuck, “Skeleturtle“. Now for the 1,224,560 yen question: what is this thing? Is it really just a skeleton?

Let’s dispense with the skeleton theory right off the bat. Just after the scene transitions to Infant Island’s beach, the creature in question can be seen moving quite organically; tohokingdom.com/media/tk_toon_biosit even blinks! In fact, it really doesn’t look like a sea turtle skeleton at all. If it were, the front flipper would have likely decomposed, leaving the metacarpal and phalanx bones visible. Also, the animal’s ocular orbit would appear far more dramatic, indicating that the dark round facial feature we’re observing is actually its eye. Finally, the nasal cavity is nowhere to be found. All signs point to one glaring conclusion; it simply isn’t a skeleton. This raises a new question: is it just an ordinary sea turtle, or is it a bona fide kaiju?

Although perspective is difficult to analyze on a bumpy terrain, the fact that Skeleturtle is located further away from the camera than Akira Takarada‘s character gives us the ability to determine a minimum value for its size. Comparing Skeleturtle to Takarada [1], the carapace has a minimum length of 1.19 meters. The biggest specimen of the largest known species of sea turtle, Dermochelys coriacea, had a carapace length of 2.2 meters [2]. This would seem to hinder the claim that Skeleturtle is a legitimate kaiju. However, we know full well that the 1 meter long Giant Lizard is considered one, despite the fact that the real life Komodo Dragon’s can reach a jaw-dropping 3.13 meters in length [3]. Perhaps being a kaiju isn’t all about size; maybe there’s a certain cryptozoological aspect to the term. This leads to yet another question…

Does Skeleturtle match any of the seven currently known species of sea turtle? Its anomalous coloration could be explained away as leucism or albinism, but its physical proportions are stunningly neotenous compared to other species. The head is at least half a meter long, and its neck can comfortably support its weight even when elevated over a quarter meter above the ground! The shell most closely resembles Lepidochelys olivacea, but the carapace is disproportionately taller than any known Chelonioidean [4]. These physical properties would suggest that Skeleturtle is a yet unknown form of sea turtle, possibly even a juvenile! Since Infant Island has experienced the fiery sting of the Atomic Age, one could speculate that these unusual biological anomalies are the result of the Godzilla universe’s well-established rule that nuclear testing has the potential to lead to dramatic mutation.

So, what’s the final verdict? If we are to classify Skeleturtle using the same rules that are apparently applied to such creatures as the Giant Lizard, we could very well dub the pallid, shelled beastie a “kaiju”. Even if you feel otherwise, I’m sure we can probably agree that it’s nowhere near big enough to fall into the “daikaiju” category.

UPDATE (10/26/13): It appears that our pale Chelonioidean friend has not gone unnoticed by other circles. If you’ll look to your right, you’ll see that it has been made into a toy as of 2012! Available in Japan, the package calls it Infanto-jima no kai kotsu (インファント島の怪骨). This roughly translates to “mystery bones of Infant Island”. Though it would appear that the party responsible for this wonderfully obscure item is under the impression that the filmmakers intended for the carapaced creature to be a skeleton, I still pose the evidence in the above article as a bit of respectful disagreement.

I’d like to give a big shout out to Klen7 for providing the accompanying picture and confirming the translation.

This article was first published on June 8th, 2013.