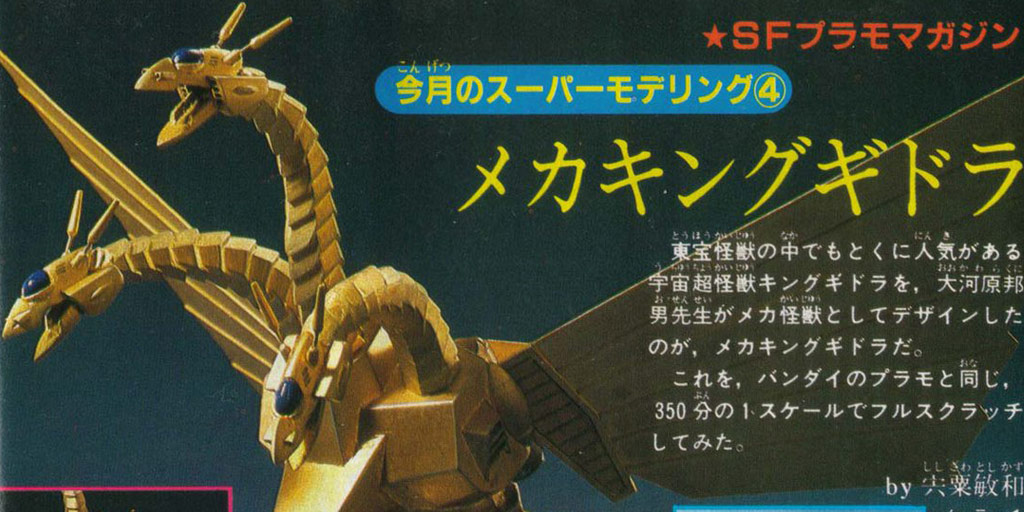 For some time there has been some intriguing artwork kind of floating around the Internet portraying a golden, fully-robotic Mecha-Ghidorah that was originally published in a magazine in the early 1980s, a super robot which apparently fought Godzilla in some sort of officially licensed story. I have seen the picture passed around on forums and speculated about repeatedly without much in the form of direct knowledge pertaining to the contents of the article/short-story/whatever the heck it was, except some dismissive remark that the original article amounted to something akin to lousy fan-fiction from someone who may or may not have actually read the material.

So I was really curious when I saw that the article/story was being republished in the Godzilla All-Movie DVD Collector’s Box Vol. 41, which features the Toho Champion Festival cut of Invasion of Astro-Monster, originally shown in 1971 at the Champion Festivals at the time. I initially had not been planning to purchase this volume, but the fact that I could finally put the mystery of the golden Mecha-Ghidorah to rest was enough to tempt me into purchasing the box.

I bought the box, took it home, opened it, and dug out the pages—predictably enough printed on terrible paper. So now I know.

And… what is it? Well, it’s not exactly a story. Let’s start with the basics. 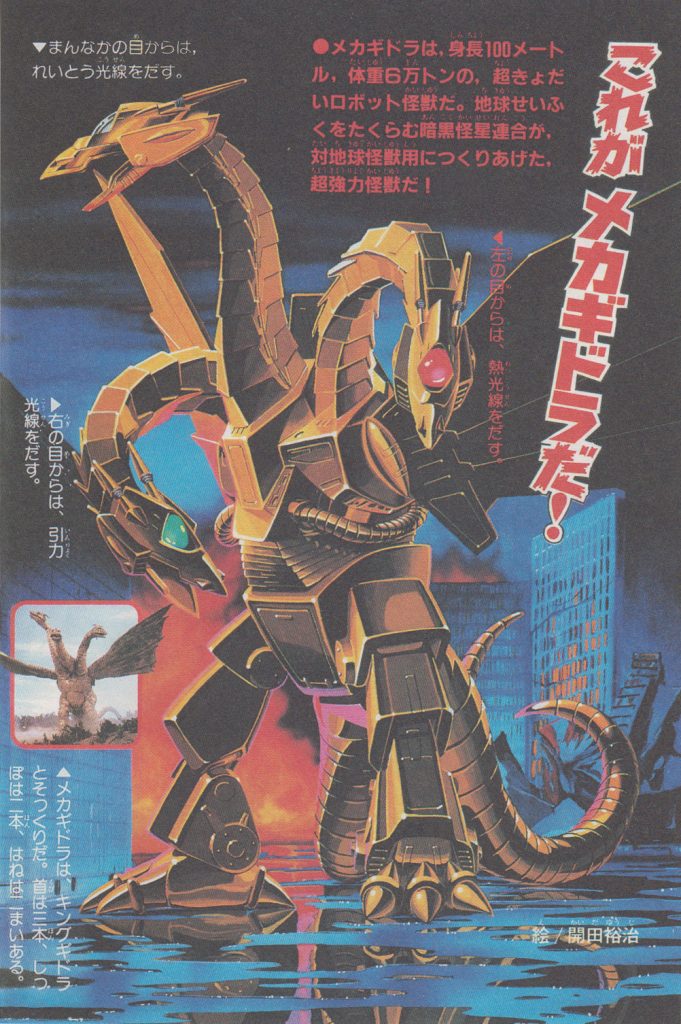 The Yuji Kaida painting of Mecha-Ghidorah in all his glory.

The article was originally published in the March 1983 issue of Terebi Magazine, and the reprint includes several pieces of art. Note that the reprint from the box set that I own indicates that the piece was originally published in March 1981, but I received a correction from Monster Island Buddies that this is actually a mistake, and he helpfully provided a scan of the cover of the March 1983 magazine so we can see what it looks like. Big thanks to Monster Island Buddies for the correction!

Anyway, back to the article. The piece of artwork I most often saw attached on online forums—a beautiful painting featuring a grinning Godzilla busting the right head off of a rampaging Mecha-Ghidorah in the middle of a city while a Japanese couple in an action pose looks on in the corner—was done by Masami Watanabe, who is a frequent illustrator of tokusatsu. Just google the name and feast your eyes on a wide variety of really excellent artwork! I probably just don’t pay enough attention, but I think Watanabe deserves more acclaim in fandom circles. Anyway, on the next page is a full-page, full-body drawing by monster-art legend Yuji Kaida. The publication also includes an enormous two-page dissection illustration, showing the robot’s inner workings and an explanation of the robot’s various powers—and some information about the man who designed the monster, Kunio Okawara, who is famous for basically inventing the “mechanical design” job description in anime with his groundbreaking work on designing the Gundam mecha. There are a few other illustrations of the villains behind Mecha-Ghidorah’s design, though I did not see an attribution for those art pieces. 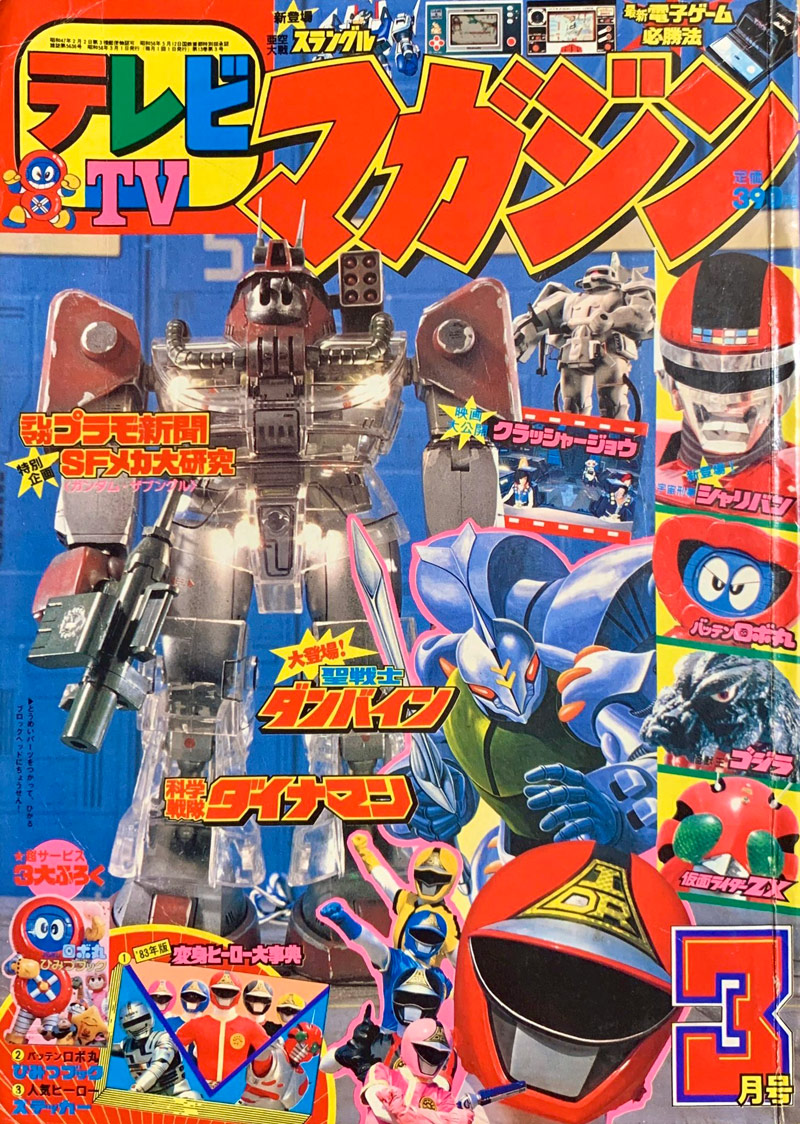 The March 1983 issue of Terebi Magazine

So now that we have seen the names behind the art, what is the STORY? Well, to be frank, there isn’t much of a story given—just kind of the bare-bones of a scenario suggested for the robot’s background and powers. The first two pages have text that says the following:

Godzilla tries with all of his strength to bite off the head of Mecha-Ghidorah, which is made from space metal.

Each of the three heads of Mecha-Ghidorah emits a different kind of light beam.

Mecha-Ghidorah was built modeled off of that monster King Ghidorah.

And that’s it so far as the battle between Godzilla and Mecha-Ghidorah is described, because the story is mostly left up to the imaginations of the readers. Nevertheless, there are some more specific details about the design of Mecha-Ghidorah and his various powers, and a full page about the secret of Mecha-Ghidorah’s birth… but no real narrative. Which doesn’t mean we don’t have some interesting background details to look into.

It probably makes more sense to reveal the secret of Mecha-Ghidorah’s birth first, because that plays into the robot’s various design features. The creators of this version of Mecha-Ghidorah are a group known as the Dark Mysterious Star Alliance, which has made the robot in order to destroy Godzilla and take over the world. The Dark Mysterious Star Alliance is made up of a whole slew of Toho villainy, including the X-Seijin, the Mysterians, the Natalians, the Kilaaks, the cockroach aliens, the ape aliens, and even the aliens from the planet Yomi of The War in Space (1977) fame. Mecha-Ghidorah was built on a planet that the Dark Mysterious Star Alliance controls, and an image of the construction process is also provided, with a short passage to the side about how giant robots based off of powerful kaiju are very tough just from looking at examples like Mechagodzilla and Mechani-Kong. 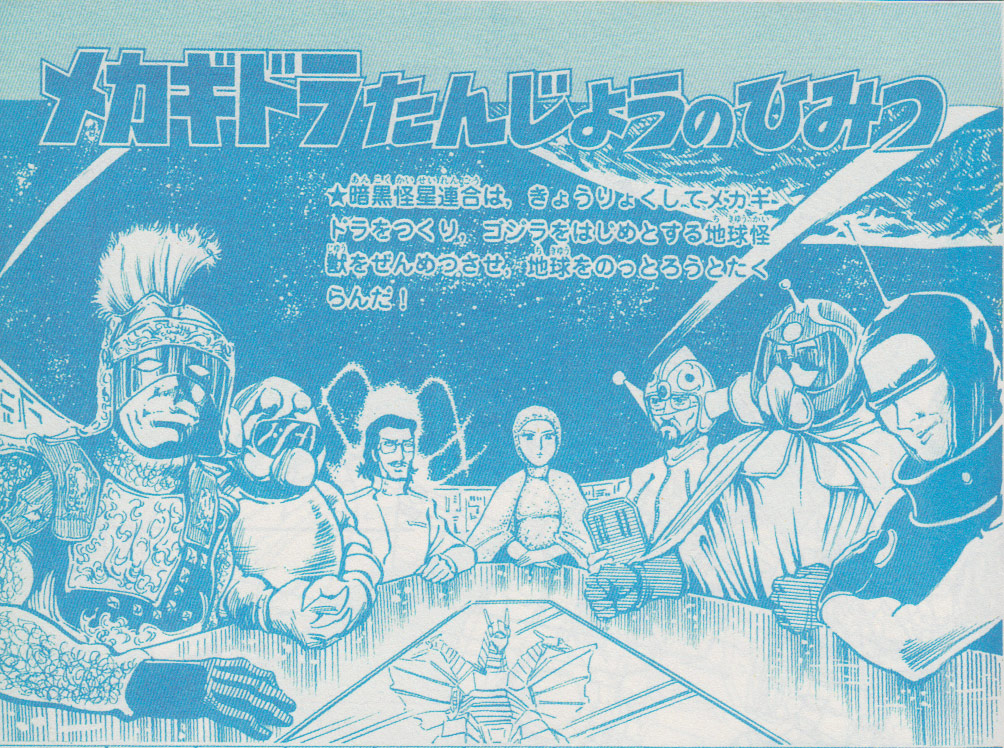 The Dark Mysterious Star Alliance hanging out at their evil lair of evilness.

And it’s true–this version of Mecha-Ghidorah is a real powerhouse. Like King Ghidorah, Mecha-Ghidorah sports three heads, and each of these heads houses a massive eye, each with a different color—red on the right, white in the middle, green on the left. Each of these eyes can emit a different kind of ray, with the red eye emitting a heat ray, the white eye emitting a freeze ray, and the green eye emitting the familiar gravity beam that the real King Ghidorah was known for. Interestingly, in the 1991 film, King Ghidorah was originally going to shoot three different rays, which can still be seen on the famous poster by Noriyoshi Ohrai, and also in early shots for the film that were actually completed and can be found on YouTube. The rays, or beams, are modeled after the beam weaponry that had been installed in Mechagodzilla and the Daimakan (the alien ship used by the Messiah 13 aliens from the planet Yomi from The War in Space).

Moving on to Mecha-Ghidorah’s tails, each tail is tipped with a drill fashioned after the Showa Mogera robot’s drill nose built by the Mysterians. The robot’s back features an enormous buzzsaw, based off of Gigan’s massive cutter. The robot’s main energy pack is housed in its crotch area, and anti-gravity plates are installed in the robot’s wings. Various other, smaller features are also pointed out on a sprawling double-page spread, including high efficiency antennae and mechanisms to make the feet move.

And that is about it as far as the magazine article is concerned. We never learn how the Dark Mysterious Star Alliance came together, or what happened when they attacked, or if Godzilla wins or loses. It all seems to be up in the air, and it isn’t really clear why this design was made, although it is possible that it was part of some kind of promotion to try to garner more interest in the Godzilla reboot projects that ultimately failed at the time (my colleague Patrick suggested this explanation to me). The Mecha-Ghidorah design must have been fairly popular with the Japanese fans at the time, because I was able to find pictures on Twitter of a scan from SF Puramo Magazine in which a model of the mech was included as an example of “super modelling,” which was apparently a monthly feature. The best I can understand is that the model was created from scratch (it’s a “full-scratch” model) by amateur (?) modeler Toshikazu Shishizawa, and was made to match the Bandai vinyl scale of 350/1. The Shishizawa model has an original design for the robot’s backside, however, replacing the Gigan buzzsaw with a pair of jets.

Still, to me, the fact that this version of Mecha-Ghidorah exists as this sort of nebulous “what-if?” design is puzzling—but other speculative designs have also appeared in magazines and been the basis of models as well, such as the Kongzilla design made by Matt Frank and also made into a really amazing sculpture, the “Metal Gear” Mechagodzilla, and others. I have seen images of a kind of souped-up Gigan that were also published in a magazine at one point, and there are other examples I am sure as well—the Internet is a treasure trove of confusing bits of artwork and mysteriousness. Nevertheless, as I have uncovered more about this particular Mecha-Ghidorah, I still wish there would have been some kind of short story attached rather than just a mostly empty scenario! Maybe some enterprising fan-fiction writer could take up the challenge and write one… 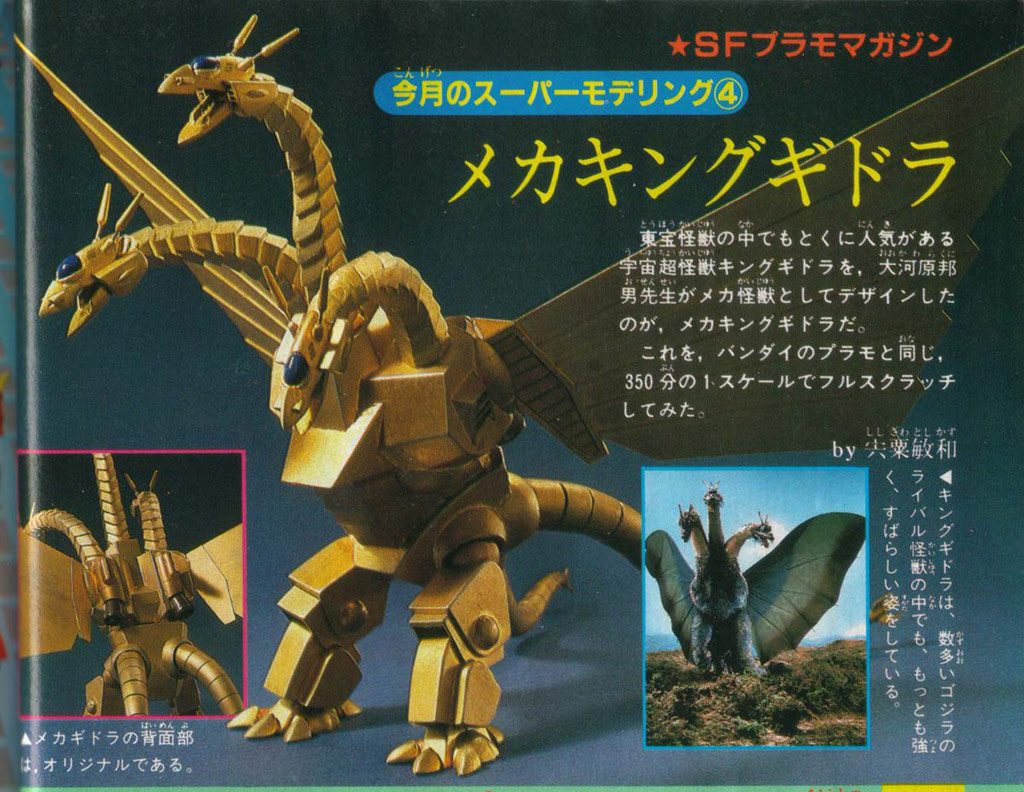