This… might be the best named Godzilla snack of all time. The Shin Godzilla: War of the Takoyaki senbei cracker snack from Coms is one of the most hilariously packaged Godzilla snacks I have encountered yet. The image on the package is yet another shot of the now-classic Godzilla 2016 posing with claws outstretched and curving upwards… but this time rendered in an adorable shiny chibi style. This Godzilla is standing in front Osaka Castle (perhaps on one of his trips to Universal Studios Japan?) and is assaulting a bowl of Takoyaki with purple mouth lightning, and zapping eight more airborne Takoyaki treats with his back-blasts. It seems the people of Osaka are bombing the Big G with treats! In the corner reads the text: Takoyaki vs. Godzilla. At the bottom, perhaps most delightfully of all, is the following: “Can the Takoyaki which has been smashed flat into senbei crackers triumph over Godzilla?”

Then next to that imaginative sentence we have “This story is fiction.” I am not sure if that disclaimer is a means to declare this epic duel to be a non-canonical Godzilla story, or just a way to assure customers that the crackers do not actually include real Godzilla toe-jam as an ingredient.

As for the crackers themselves, for senbei crackers, they are pretty small, but reasonably tasty, and they definitely have the Takoyaki flavor, with a strong ginger tang. Normal senbei crackers are often much bigger, sometimes round, sometimes rectangular, but these ones are smaller… probably to mimic the size of real Takoyaki, and create the illusion that Godzilla really did smash them flat. And as I said, they are good if you like Takoyaki and crackers, but they aren’t good enough to go wild over. I basically ate a couple then put them aside and they went bad really fast.

As an added bonus, the box also comes with a little diorama of the image on the box that features Godzilla attacking the Takoyaki. The diorama is composed of a little stand, a plastic PET Godzilla, and a background card of Osaka Castle. It’s small, but terribly fun, and a great way to get extra value out of your treats after the food is gone. Folding the stand for the background card and getting it just right so that it will stand is a bit tricky, and even after you get the castle an Godzilla posed, they basically are barely balanced and can fall any moment. Still, the resulting diorama looks cool (to my eyes), and I hope to find a place for it on my work desk.

While the snack itself is not the most mouth-watering I have tried (I prefer the Godzilla Arare Crackers for sheer flavor), this is by no means an inferior G-snack, and the wonderfully quirky box art and included diorama really put this one over the top for me. If you love the silly side of Godzilla products (like I do), the Shin Godzilla: War of the Takoyaki senbei crackers is a no-brainer.

Shin Godzilla has never looked cuter than when he attacks takoyaki 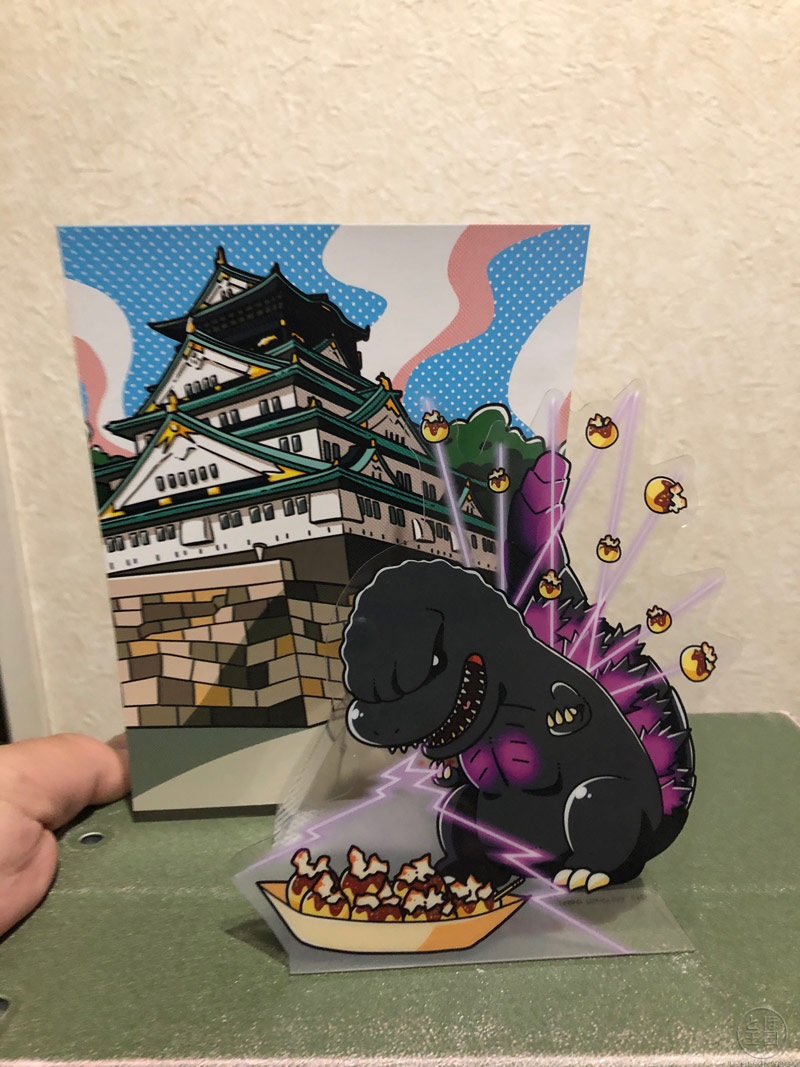