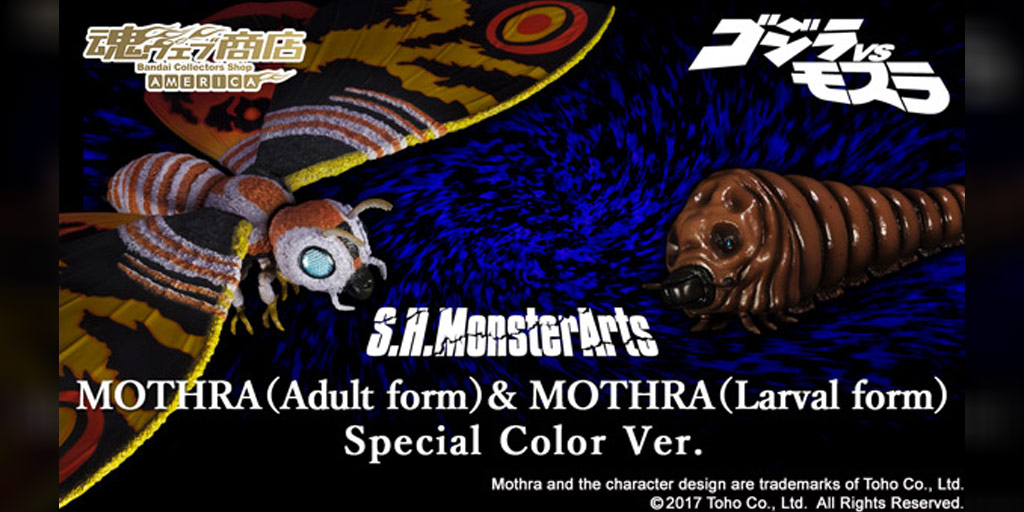 On May 15th, 2017, I was fortunate enough to be invited to the Bandai Tamashii Nations America’s office in Los Angeles, California. I was there to check out and take exclusive photos of the Special Color version Mothra set. This includes both the adult, or imago form, and larva as based on the version from Godzilla vs. Mothra (1992). This set is being sold exclusively on the Tamashii Webshop.

While it’s the same as the previous release, the coloring on Mothra’s “fur” has been darkened. It’s almost like a “nighttime” version of the previous release and it looks really cool. All the articulation is the same as well. Mothra comes with a beam effect that when you put it on, goes over her antennae when you put them on. I didn’t put them on for these photos, but you can see what they look like in the promotional shots. They do look pretty cool with the mix of yellow with a white center.

The larva form also has the same articulation as the previous release, but the material used is a little different. It’s smoother this time around and has a nice glossy sheen to emulate the part of the film when the larva first hatched from it’s egg. The paint is a little lighter this time around in some areas but it still looks pretty nice.

The pre-order window for this release is closing fast, so act now! Supplied below is a link to pre-order the set, as well as some exclusive photos of the two figures and the beam effect accessories.