Rialto Pictures, a company that focuses on the restoration and re-releasing of classic films theatrically and on DVD, is currently poised to release the 1954 classic Godzilla, or Gojira, in theaters in the United States for Spring/Summer of 2004. The version shown will be the uncut Japanese version of the film, not the 1956 Godzilla King of the Monsters’ version with Raymund Burr. This article is a news roundup for the release of the uncut Japanese version of the original Godzilla film, set for the 50th anniversary of the production.

This weekend, starting Friday May 7th, Rialto Pictures’ release of Godzilla (1954) starts off its country wide tour with the Castro theater in San Fransico and the Film Forum in New York. As previously mentioned, and highly touted by Rialto, this release is of the uncut Japanese version. In time for the film’s limited release, the company has unleashed a modest advertising campaign (a newspaper advertisement for the film can be seen to the right), but Rialto has mostly been relying on positive critical praise to pack the theaters. So far, thankfully, critical acclaim for Ishiro Honda‘s masterpiece has been strong, and the film has maintained a 92% rating on Rotten Tomatoes. 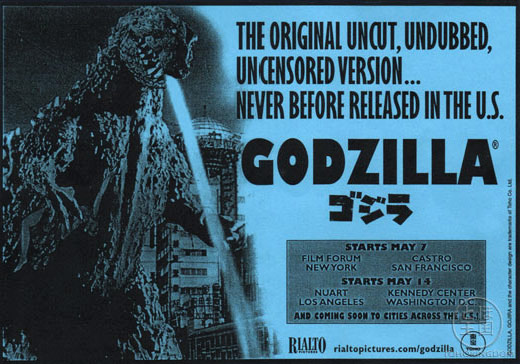 However, Godzilla fans are likely already well versed in the merits of the first Godzilla film, which leaves the question: how was Rialto’s presentation of the movie?

On Saturday May 8th, I attended the 7:00pm showing, which was almost a full house, of Godzilla at the Castro theater to see how Rialto’s release stacked up, and I can say, with some honesty, I was a little disappointed.

I was warned in advance that the print used contained numerous scratches, but I wasn’t quite prepared for the amount that greeted me in the film’s opening scenes. Some of the early scene changes also appeared to be damaged on the print, as there was a split second of black or white added to the transitions. The audio, while generally good, also could have used some work, as pops could be heard during the course of the movie.

The subtitles were good during the movie, newly commissioned and spot on, although they became a little hard to read when placed on a white background.

In terms of changes made: none. The Rialto logo appears on the screen before the movie starts, with the original 1954 message thanking the Japanese Coast Guard for their cooperation. Everything on this print is intact, just not in pristine condition.

Audience reaction to the film was strong though; as the Toho logo, Godzilla’s first appearance, and the ending were all meet with a theater wide applause. Oddly enough, the Oxygen Destroyer name got a few unintentional laughs, which is something that has been so ingrained in me at a young age I never really thought of the name as being a little over the top, but was the only sequence of the film that got riffed while even the more uneven effects shots were passed without score… something that might feel like a breath of fresh air after some of the reactions that Godzilla 2000: Millennium (1999) got during its theatrical screening in the US.

So despite the less than top notch print, seeing the original Godzilla in the theaters was still a highly enjoyable experience, and I would suggest it to others, even if simply for the fact of getting an idea of how many Godzilla fans are in the vicinity.

One thing that has been great to see, though, is the resulting publicity from the release. For example, to the right is an image to the cover story for a recent edition of SF Weekly with the cover story being “Returning Japanese” and focusing on the newly uncut release of the original 1954 film.

As a side bonus, below is the Theater Listing for the original Godzilla during the Castro Theater’s run of the movie. It talks about the basic plot of the film, its impact in Japan and its film industry and also puts a lot of emphasis on the changes made when it was Americanized, such as the addition of Raymond Burr, removed footage and the added sequences in the film.

The movie will be playing at the Castro Theater from May 7th to the 20th. Check your local listings to see when the movie might come into your area, although keep in mind the film is being given a very limited release.

Rialto Pictures is preparing for the imminent release of Godzilla (1954) through out select theaters in the United States. May 7th, Friday, marks the first release of the film, which will be screened at the Castro theater in San Francisco and Film Forum in New York.

As previously mentioned, the film will be the uncut Japanese version, not the 1956 Godzilla King of the Monsters’ version with Raymund Burr, and will clock in at 98 minutes.

In order to commemorate the impending release, various newspapers from areas set to show the movie have already started promoting the film. One example of this is the San Francisco Chronicle(Sunday, May 3rd Edition) which gave the film the front cover status on their Datebook section, pictured to the right. Featured inside the Datebook section is a nice four page article on the Big G by Allen Johnson and Patrick Macias, author of Tokyo Scope: The Japanese Cult Film Companion. The article focuses mainly on the merits of the 1954 film, and also harps on the Americanization of the 1956 version, but also contains a Godzilla “Time Line” to point out important events, either inspiration for the films or the films themselves, for the Godzilla series.

There is a sharp focus on director Ishiro Honda in the Chronicle‘s article, including a salute to the dark theme of Godzilla as opposed to just making another “monster on the loose” potboiler, like the film’s inspiration: The Beast from 20,000 Fathoms. The article also applauds composer Akira Ifukube for his long running work in the series, in particular his score for the original Godzilla (1954). A quote from the composer, used in the article, appears to the left. Special Effects director Eiji Tsuburaya and suitmation actor Haruo Nakajima are also commended for their work on the 1954 classic.

The film will be screened at 33 theaters in total, for the time being, which are:

It has been 10 years since Rialto released the original, classic Godzilla (1954) in theaters around the US.

At the time, Rialto was celebrating the King of the Monsters’ 50th anniversary with the first ever release of the original film, uncut and undubbed in theaters. A decade later and Rialto is ready to ring in the 60th anniversary in the same fashion. According to the company, the print has been newly restored for a better presentation.

Regardless, this release has a lot of shadows of the 2004 event. This includes the same poster, seen to the right with the 60th anniversary note, and also an almost identical trailer, seen below, except with a new date at the end for 2014 and the 60th anniversary. The trailer is mostly text based, and uses the end credit theme from Godzilla vs. Destoroyah (1995).

As before, this will be a limited release. Check Rialto’s site for the current theater listing. So far, the following theaters are included: