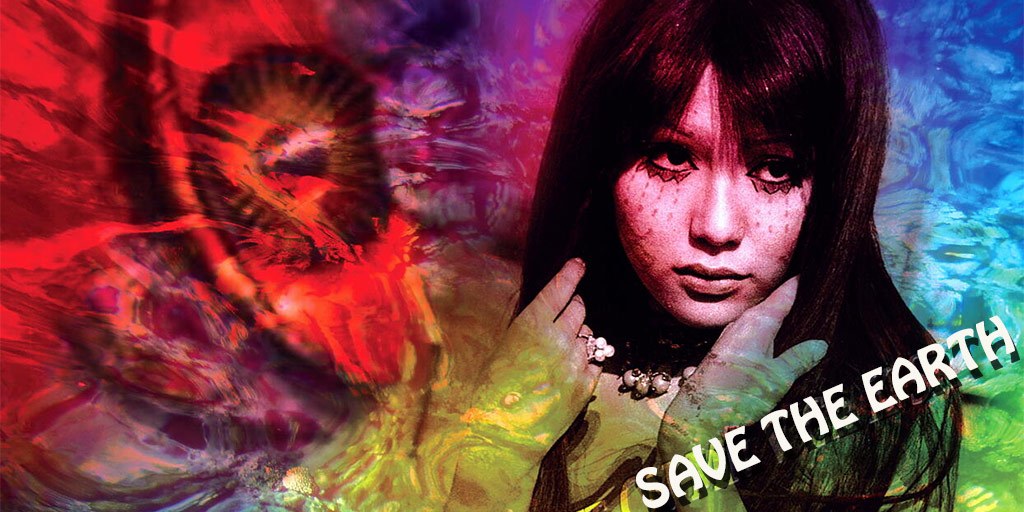 Edits, additions and replacements. Toho’s large catalogue of films have sometimes been released untouched for the international markets, and other times have been hacked up almost beyond recognition. This article focuses on the rarely talked about musical component of this process, and looks to cite where music was inserted into a Toho film from an outside source when brought overseas.

Note that entries are not complete. Meaning just because a film is listed doesn’t mean all overseas film music is represented in that entry at this time. This article is a work in progress. If you have information on a Toho film and the original music not listed here, please feel free to mention it in the comment section. The more details that you can provide, the better it will assist us in getting it added. 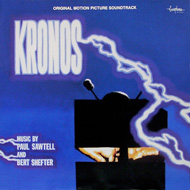 When Paul Schriebman re-edited Godzilla Raids Again as Gigantis the Fire Monster for its US release, much of Masaru Sato‘s score was replaced with music from various American B movies of the 1950’s. Many of these cues originated from the 1957 giant robot film Kronos, and were composed by Paul Sawtell and Ben Shefter. The theme song for the omonimous robot is frequently heard in Gigantis the Fire Monster, underscoring most of the battle between the creatures.

The score for Kronos was released in its entirety in 1984 as an LP (CLP-1001) by Cacophonic. The tracks as they appear in the film are:

#1 The “Main Title” serving this very same function in Gigantis the Fire Monster
#15 “Power Resources”, when Godzilla and Anguirus are first spotted on Iwato Island, and during Dr. Yamane’s lecture about the “Fire monsters”. The cue then fades to:
#16 “Attack on Kronos”, which pops up just as stock footage from Godzilla (1954) does
#19 “The Bomb Part 2”, when Godzilla makes his landing on Osaka
#21 “Kronos on Rampage”, as Godzilla and Anguirus finish their battle
#22 “Kronos Attacked”, for the prologue scenes and later when Kobayashi’s engine goes out of order

The soundtrack for Kronos was later re-released on CD in 2012, as a 2-CD set that also featured The Cosmic Man by Monstrous Movie Music. The set was called Kronos/The Cosmic Man (MMM-1963/1964).

The Kronos/The Cosmic Man set can be purchased here. 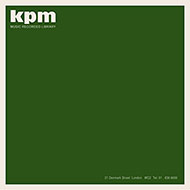 Prepping the movie for its US release under the title Ghidrah, the Three-Headed Monster, Continental did some fairly substantial editing to the film. This included removing scenes from the movie, about 8 minutes in total, and shifting around the order of events in the film. For example, King Ghidorah shows up fairly late in the American cut. During this process, Continental also inserted stock music in the movie.

Two of these stock themes are by composer Trevor Duncan. These tracks are both called “Smouldering Fury”, denoted as (a) and (b). In terms of their use in the US version:

Another stock theme is by composer Steve Race. This plays as they learn of the magnetic properties of the meteorite that landed in Kurobe Valley through it interfering with their compasses. The track, called “Whodunnit”, can be purchased here.

These are still being identified. 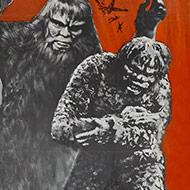 Readied for its 1970 release in the United States, several changes were made to The War of the Gargantuas. This included the addition of unused footage, filmed as part of the original production and often containing expanded scenes of destruction. The musical score was also altered, including the addition of some of Akira Ifukube‘s themes from Invasion of Astro-Monster (1965).

However, Ifukube’s famous “Operation L March” theme was also removed from the American version of the film, replaced with a combination of reusing Gaira’s theme and also a stock cue. This stock cue, from APM music, is composer Philip Green’s “Terror Hunt”, a popular track in several other monster movies released before and after the US version of The War of the Gargantuas. Other uses include the 1965 The Legend of Blood Mountain, the 1971 Zaat and the TV show SpongeBob SquarePants. One of the earliest uses of the theme was way back in 1957, for the movie The Incredible Petrified World.

Unfortunately, a retail version is unknown to be available at this time.

When Maron Films was bringing All Monsters Attack to the US market as Godzilla’s Revenge they decided to remove the “Monster March” songs by Lilly Sasaki. This song plays twice during the movie. The first time is during the opening credits, where it plays over scenes from the movie and stock footage from earlier productions. The second time the song plays is right after Ichiro runs into the bully, Gabara.

When removing the song Maron Films replaced it with a stock motif by Ervin Jereb called “Crime Fiction”. Different versions of this motif appear during the two sequences that the “Monster March” song was removed, although Lilly Sasaki is briefly heard at the start of the second time as the Japanese song was haphazardly edited out there.

Sadly, a retail version is unknown to be available at this time. However, a different version of “Crime Fiction” was released to CD on Younger Generation by Universal.

When AIP picked up the rights to the 1971 movie Godzilla vs. Hedorah, they opted to produce their own version for the US market. Retitled Godzilla vs. the Smog Monster, this version of the movie was more or less faithful to the original with minor changes committed. One of the more glaring alterations, especially compared to the International version, is the addition of a new song: “Save the Earth”. Replacing Mari Keiko’s “Give Back the Sun!”, although using the same background music, the new piece was created by artist Adryan Russ with lyric writing help from Guy Hemric. Much like “Give Back the Sun!”, it is used three times in the film: the introduction, at the nightclub and after Hedorah is defeated. Unlike its Japanese counterpart, there is only one version and no male chorus alternate as was used at the end of the film.

In terms of release, the song can be found as an easter egg on the CD Everyone Has a Story: The Songs of Adryan Russ (LMLCD-133).

Everyone Has a Story: The Songs of Adryan Russ CD can be purchased here. 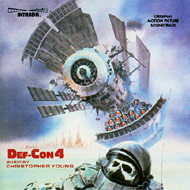 For Godzilla’s return to the big screen, New World Pictures opted to go create a version of the film that harked back to the Americanization of the original Godzilla (1954) as Godzilla King of the Monsters. This new version of The Return of Godzilla, titled Godzilla 1985, also underwent heavy editing. Scenes were added and removed, and to supplement this new music was also added.

For the task of fleshing out the musical score, New World Pictures turned to composer Christopher Young, who in his later years would score productions such as Spider-man 3. Rather than conducting new music, they opted to use Young’s haunting score for the Canadian movie Def-Con 4. This soundtrack was also made available in 1990 on CD by Intrada (MAF-7010D), although is rare to come by today.

In terms of execution, thankfully composer Reijiro Koroku‘s music was left mostly unscathed for the sequences that were left in the movie. The “new” music instead was used to replace the end song, fill in silence, and to accompany new scenes. Below is a complete rundown of these changes, which use the track titles from the CD release:

The Def-Con 4 soundtrack can be purchased here.

Additional information and clarification provided by Ethan and Baradagi 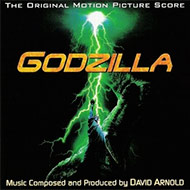 When TriStar went to release Godzilla 2000 in theaters, they did a substantial edit to the original movie. This included a bit of trimming and enhancing the audio, giving a more robust surround sound. Beyond just simple dubbing, new sound effects were also utilized, with a lot of emphasis placed on the movie’s sound.

Probably not surprisingly, this extended toward work on the soundtrack as well. Some of composer Takayuki Hattori‘s themes were removed. This included in favor of inserting more of Akira Ifukube‘s music, used for the first appearance of Orga and also an encore performance of the Godzilla theme during the end credits.

The movie also featured original music, though, composed by J.Peter Robinson. This was inserted in numerous points including:

Some of the original tracks were released on a promotional CD in Europe, pictured above. They were bundled with tracks from GODZILLA (1998). 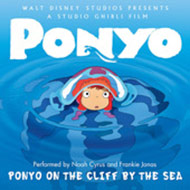 When Disney released Ponyo in the Western Market, they chose to capitalize on the successes of their pop stars Miley Cyrus and the Jonas Brothers by casting their younger siblings, Noah Cyrus and Frankie Jonas, in the film. Due to the original version featuring a song sung by the leads, Disney translated the lyrics to English and had their leads sing the song using the same backing, not unlike Godzilla vs. Hedorah‘s “Save the Earth”. Disney also created a remix of the song with some different lyrics, which follows the dubbed version of the song in their version of the film’s end credits. Both Disney’s version and the remix are included in a single available for purchase on iTunes.

For the movie’s Italian release in 2009, this song was also redone by distributor Lucky Red. Like the US version, this song replaces the Japanese lyrics with ones in Italian by the leads for this dubbed version. Also like the one created by Disney, this song was uploaded to iTunes for resale.

The Noah Cyrus and Frankie Jonas versions of the songs can be purchased here.

This article was first published on September 23, 2010.