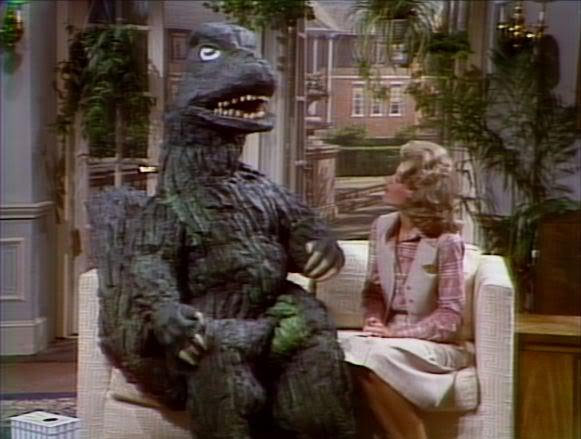 Background Details: Created by Robert Short, originally appeared in Hollywood Boulevard (1976). Also appeared later in an SNL skit with John Belushi, and the airing of an edited version of Godzilla vs. Megalon.

Background details: The suit was created by Cleve Hall, who also performed as the monster in the film and described the experience as “Awesome”. In an interview with B Movie Nation, Hall said he could have died that day and he wouldn’t have cared (given how happy he was to have that opportunity). According to that interview, the Godzilla sequence took six days to shoot.
According to an interview with Ravenous Monster, Hall made a Godzilla costume when he was a junior in high school for a costume contest in Houston, Texas, which garnered the attention of Six Flags Amusement Park. The park hired Hall to create a costume for them, and so began Hall’s lifelong career building monster costumes. 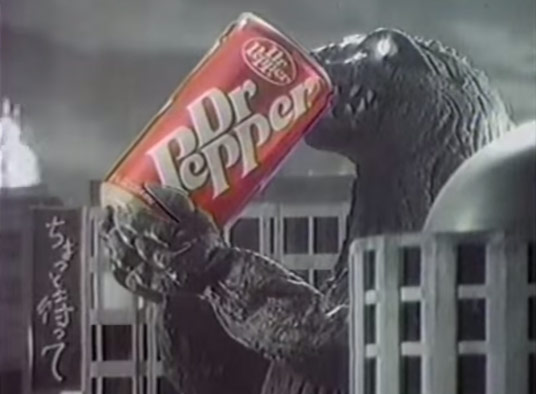 Background details: Apparently, the advertising campaign had a budget of 10,000,000 dollars. The commercials were originally independent of the Godzilla 1985 film, and product placement was negotiated after New World learned of Dr. Pepper’s deal with Toho. In addition to the commercials, the suit also appears on shirts one could get via mailaway offer. Interestingly, the shirt alters Godzilla’s eyes to being yellow. 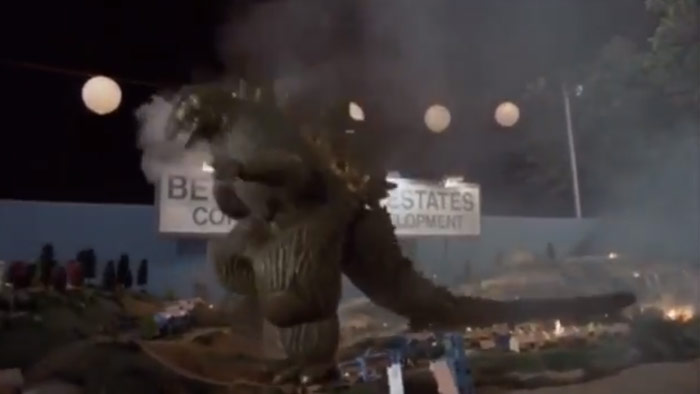 Background details: Created by ILM, animatronic face. Directed by Michael Owens. Painter Richard Miller worked on the paint job of Godzilla’s teeth. Richard Miller designed the teeth so that they were dirty from breathing flames, but “white on the ends from chewing up a lot of people.”
The tail was twelve feet long. Barkley is supposed to be 160 feet tall. The tape was filmed in slow motion to create a sense of size. Godzilla’s flame was created by tracing on top of the film with a pencil and tracing paper, with 72 drawings needed over the three seconds of animation. Smoke was produced from a vat of boiling mineral oil. The scene in which Barkley is crouched down and then lunges for Godzilla was very awkward and difficult to film effectively, requiring many takes–some of which can be seen in the making-of video.
The tail was sometimes manipulated detached from the body, such as in the scene in which it knocks the basketball skyward.
Four puppeteers worked together to manipulate the Godzilla face.
To capture the right look from Charles Barkley when he elbows Godzilla in the face, the director asked him to make the expression first and do the action in reverse–pulling away from the camera. Then, in the commercial, the scene was played backwards. The thirty second commercial required eight days of filming and four weeks of editing.

Background details: Douglas Tait, a 6’ 5” experienced monster and suit actor with appearances ranging from Freddy vs. Jason (as the titular Jason Voorhees) to the Long-Faced Bar Alien in J. J. Abrams Star Trek film, played the part of Godzilla. The suit itself took about two weeks to construct, between November 14th and December 2nd, 2013, when filming started, and was built by Legacy FX, the former Stan Winston studios that would have made the Godzilla for the cancelled American film from 1994. The suit was built around a body cast of Tait and made to be nine feet tall in order to tower above the other characters in the commercial. The suit itself, including a combined backpack and animatronic head, weighed over 120 pounds.
During parts of the ATV sequence in the commercial, Tait actually rode the ATV while wearing the Godzilla suit, although he reports that a triangular piece was taken out of the neck so that he could see better, and close ups were accomplished with an empty puppet. The waterskiing sequence was accomplished with a combination of green screen and stuntman Tim Soergel waterskiing with Godzilla feet. Tait was filmed against a green screen wearing the suit and standing on a kind of moving gimbal, and the shots were later combined. The commercial was shot between December 2nd and December 6th in 2013. Apparently a making-of feature was made as well, which may have included sequences of Tait improvising in the Godzilla part that didn’t make it into the final commercial.
According to Tait in another interview with Monster Legacy, the suit was built to resemble the original 1954 Godzilla, and thus used “similar techniques” in its manufacture. Tait stated that corn flakes were mixed into the latex to help create the suit’s skin texture.

Date aired: Online–February 28, 2014; On air March 2, 2014 during the Academy Awards (originally intended to be a Super Bowl commercial)