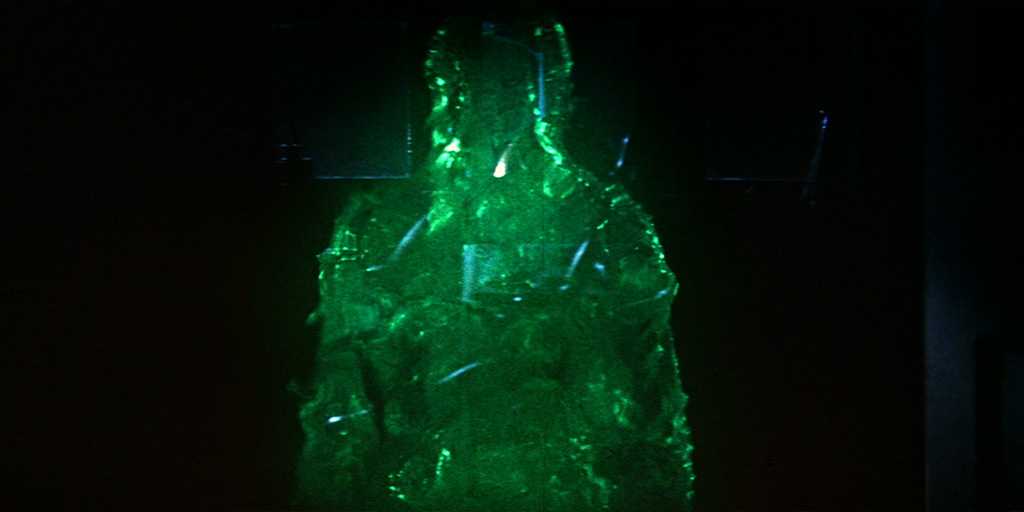 Released in 1958, Toho gives another shot at something topical for their science fiction inspiration. In this case, the subject is once more the March 1954 incident around the “Lucky Dragon” (Daigo Fukuryu Maru – 第五福龍丸). This is where the fishing vessel ended up being too close to a nuclear test site, despite being in a designated “safe” area. The radioactive fallout caused symptoms of radiation poisoning in the 23 crew-members, with one passing away as a result. The incident sparked news coverage and anger that led to the creation of an anti-nuclear movement in Japan. Famously, Toho tied aspects of the March incident to the original Godzilla (1954), with scenes that hit close to home for Japanese viewers of survivors later succumbing to the effects of radiation poisoning after encountering Godzilla at sea. For this 1958 movie, the company took things a step further, producing a film that’s much more overt in its topical inspiration. The end result by director Ishiro Honda is one of his better movies, something that works as a horror film mixed with a crime drama that takes the subject matter seriously while being aided by great special effects. It does falter though from especially weak characters in the narrative, which stop the movie from reaching its true potential.

In terms of the story, the film opens with a shot of the Ryujin Maru II adrift. As the audience will later learn, this fishing vessel was too close to a hydrogen bomb test site. The resulting nuclear fallout contaminated the crew. The movie takes the “Lucky Dragon” connection a step further by having the Ryujin Maru II have 23 crew-members, the same as the one in the real-world incident. However, the story has six of the crew-members undergo a transformation due to the radiation. Their cells begin to breakdown as they turn to a liquid state, becoming the titular H-Man. These creatures turn on the remaining crew, dissolving and killing them. Eventually another fishing vessel comes across the Ryujin Maru II. A few board the ship to see what happened, only to be attacked by the monsters. Four of them perish while the others escape. As fate would have it, a life preserver becomes dislodged and the H-Man creatures hitch a ride on it. This takes them to mainland Japan: Tokyo. There, one of the creatures comes across a drug deal being done by the Haneda gang. The monster kills one of gang members, Misaki, by dissolving him. However, the rest of the gang and the authorities believe Misaki is simply in hiding. This places a target on his girlfriend, cabaret singer Chikako Arai. The police attempt to lean on her for information, while the Haneda gang, who frequent the cabaret she sings at, threatens her not to cooperate with authorities and to disclose Misaki’s location to the gang. Meanwhile, Masada, an assistant professor and friend of police inspector Tominaga, suspects these events are tied to his research around radiation and the Ryujin Maru II. Chikako, Masada and Tominaga all become wrapped up in the mystery and conflict between the police and the gangs, while the monsters responsible begin to claim more victims. 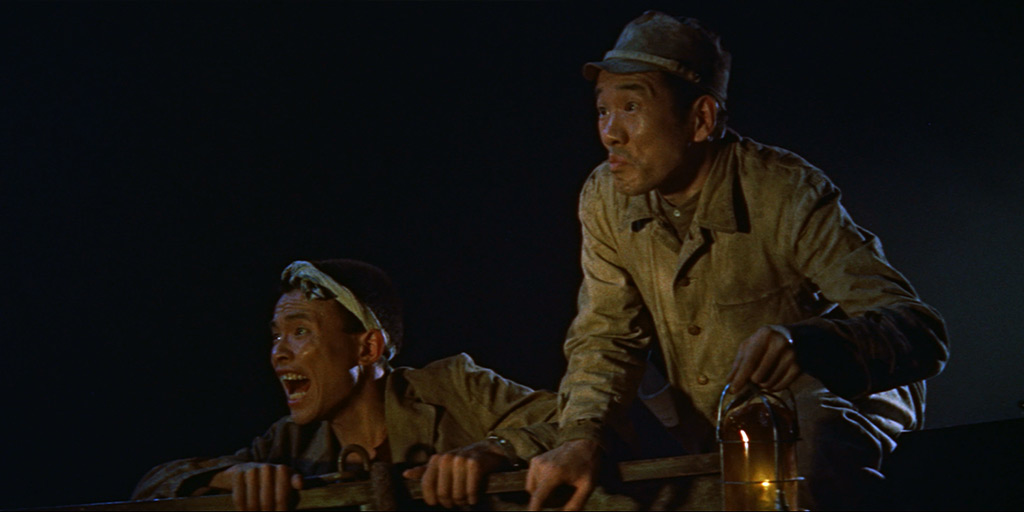 Now this story recap doesn’t do the movie justice as I’m telling it in linear order. During the movie, it starts with the drug deal gone bad and goes from there, having an element of mystery to why things are happening. Details are slowly disclosed and, while the audience does know a monster is behind things, it keeps the audience engaged as new information is revealed. For example, the scene of the second fishing vessel finding the Ryujin Maru II is told by a survivor almost half way through the movie, giving the audience key details about the origin of the monsters. When all is said and done, the puzzle gives a pretty complete idea of where they came from, how they came to Tokyo and explains the mysterious elements earlier in the movie to connect the dots.

Praise is deserved for the way the production walks the line between a crime drama and a monster on the loose feature. It’s much more effective at this then Dogora (1964) for example, where the crime element came off more as a subplot to the kaiju. Here the police and crime drama drives the narrative. Even as the identity of the monsters is revealed and their intentions known, essentially to consume people, the crime aspect continues into the climax. In fact, the movie makes a blink and you’ll miss it reference that this movie’s story is only a slice of the H-Man’s horror. This scene is where the police are looking over shots of unrelated victims whose circumstance is close to those of the gang members that have been killed by the H-Man, unknown to the police. They suspect briefly this might be bigger than Misaki… and the one guessing about this is right. It’s pretty likely that the H-Man were causing a lot more death than the movie focuses on, but the story decides to keep the narrative on the Haneda gang. As a result, the story feels a lot more cohesive. 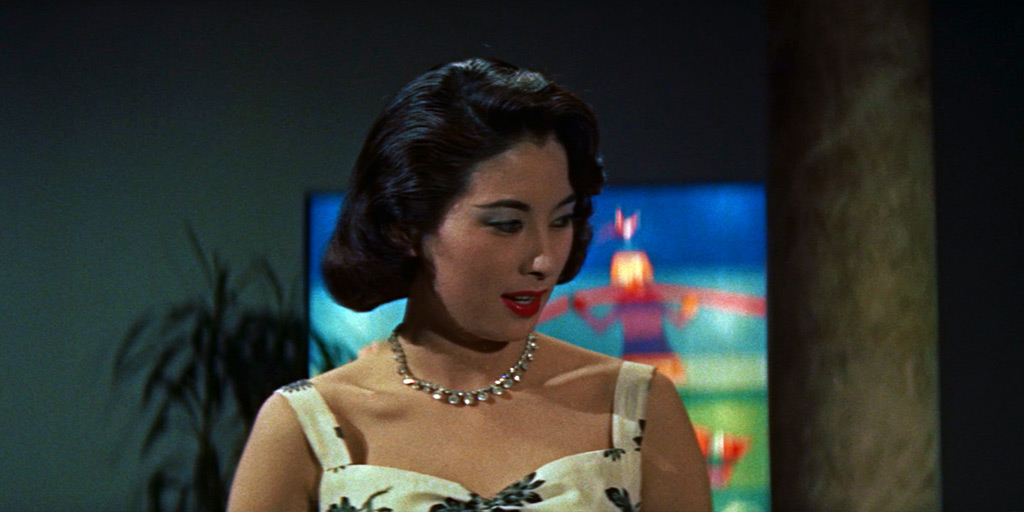 Unfortunately, the movie does falter in a notable area and that is in regards to the characters. The three leads that drive the narrative are Chikako, Masada and Tominaga. Of these, Chikako is the most successful by far. The drama revolves around her as well, as she is the living link between the police, the gang and eventually the professors who discover the H-Man. The character works best when she is at odds with both the police and the Haneda gang, as helping either will endanger her. Actress Yumi Shirakawa also plays the character well, in probably the best performance of her career. She brings a degree of allure to the role without it feeling sexualized, encapsulating the “beauty” aspect that was highlighted in the Japanese title for the movie: “Beauty and the Liquid People”. Shirakawa is also able to play the cunning aspect of the character while portraying a sense of vulnerability, best used in her dealings with the police and the gang where she feels innocent even when directly lying. However, as much praise as I give the actress, the character herself needed to be fleshed out more. In fact, other than survival and trying to help Misaki, there is very little hint at what drives the character. There is also really no depth to her relationship to Misaki or her feelings for Masada, if there were any.

As for the male leads, their characters are even more hollow. The glue that ties their stories together is that they are friends. Friends from school? War buddies? Old roommates? Nothing is revealed beyond that they are friends. In fact, this dynamic feels more like a lazy writing trick to explain why the police even give the associate professor the time of day early on when his theories around the H-Man have yet to be substantiated. Of the two male leads, Tominaga played by Akihiko Hirata comes out ahead. His motive of wanting to take down the gang is at least clear, even if it’s nothing more than his job, while Hirata does a nice performance as a stern figure who shows growing empathy toward the end of the film as the real threat is realized. Masada fares worse, especially as he’s saddled with the role as the undeveloped rebound love interest for Chikako. The character is generally the most optimistic of the cast, contrasting a little with his smile as he’s surrounded by stern faces. His introduction to the story is a pretty big misfire, though. He seeks out Chikako at the cabaret on just a hunch that Misaki is related to the Ryujin Maru II. This hunch ends up being correct, although not in the way Masada assumed. Misaki is not one of the H-Man, but merely a victim of the monsters. That said, even being partially right feels like the script was reaching. It really could have used some additional justification, like maybe Masada hearing that the clothing remains were radioactive or something. Anyway, Kenji Sahara gives a decent attempt at the role, but doesn’t have much to work with and doesn’t really stand out in any positive way. 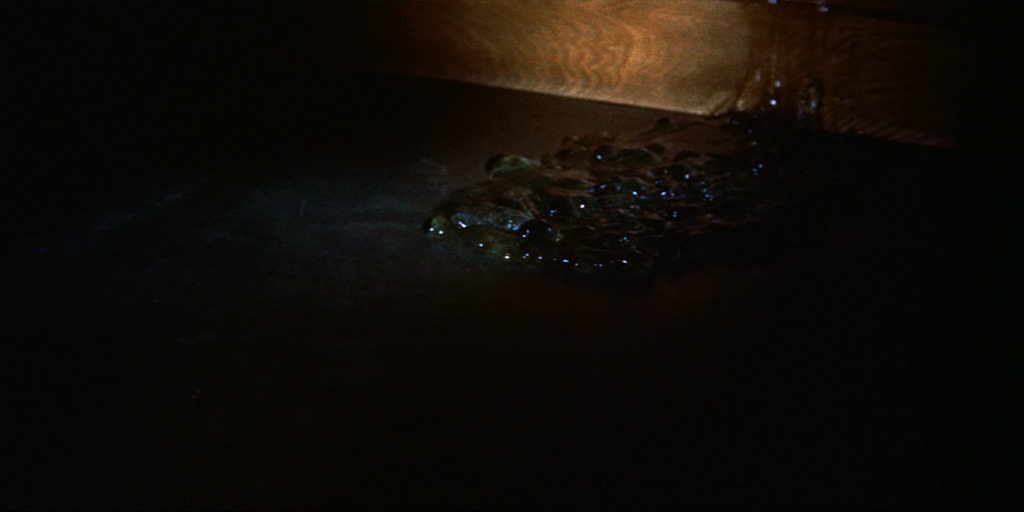 Now Honda has done a number of horror films or movies with elements of horror in them. H-Man is the most successful of these at actually evoking fear from the viewer, especially today. A lot of that is owed to a combination of the menace of the antagonists, the titular liquid people, and the special effects work by Eiji Tsuburaya. In terms of the menace, the monsters are brutally efficient at killing. A simple touch and their prey are gone in a horrific fashion. Furthermore, the creatures stalk in the shadows, drop from above and other methods that make them eerie and scary to the audience. An element of this success is thanks to the effects, which are remarkably consistent for a Japanese feature of this time period. Not everything works of course, such as the awkward animated dissolve sequence for the dancer, but most scenes of the people dissolving are graphic and effective enough to cause a reaction from the viewer. The H-Man themselves are also handled well, especially with their liquid form moving about. It’s credible and at times impressive even today as the being scales walls and does other feats.

As for the music, Masaru Sato starts to come out of his shell and the soundtrack is better for it. Some of this is totally circumstance, like the big band music that he would later be known for fitting the cabaret setting so perfectly. His main title to the movie is also a rousing, energetic piece. It doesn’t fit the opening title at all, as it’s played against the backdrop of the eerie and seemingly empty Ryujin Maru II. It does work later in the movie, though, as the march for the Special Task Force as they commence an operation to wipe out the monsters. Sato still has room for growth, though, and some of the music doesn’t resonate. This is especially true for the themes directly associated with the monsters, which was a combo of piano wire and woodwinds to achieve the “ping” noise, as they don’t elicit a sense of menace or atmosphere. Merits and detractions of Sato aside, the music that is probably best remembered from the film are the songs. These are done by Martha Miyake in English. While they are dated, sounding very much like the 1950’s period they came from, the quality is actually very high and they are pleasant songs… totally against what most might expect from English based tunes from Toho during this era.

Overall, this is a solid monster movie from Honda. It’s a bit against the norm for the director in the science fiction genre, but with Matango (1963) showed that the director had a knack for horror.