Sometimes, a series reaches a stature where even the “lesser” films can’t hurt it due to the other strong entries over the years. Godzilla vs. Megalon is not one of those films. Love it or hate it, one can’t deny the amount of harm Godzilla vs. Megalon has done to the franchise in terms of credibility. The claim could be made that had it not been for Godzilla vs. Megalon Godzilla might never have picked up in the States, as this was the movie which reignited America’s pop culture fascination with the monster. Truth be known, the success of Godzilla vs. Megalon was more due to the advertising, including the elaborate posters of Godzilla and Megalon fighting on the World Trade Center, than the film’s merits. Its place in pop culture aside, the 1973 Godzilla film takes the largest heat for simply failing to do anything right: the story is unfitting for a full length feature, the actors have nothing to portray with their undeveloped characters, the new kaiju seem out of place for a Godzilla film, there is little special effects work involved, and the music is simply horrendous.

Perhaps a sign of things to come with Godzilla’s appearance in the Zone Fighter TV series, Godzilla vs. Megalon features a story more appropriate for a half hour episode than a full blown movie. In short: an inventor named Goro is attacked. During the skirmish, the controls to his invention, Jet Jaguar, are taken over by an undersea race called the Seatopians. The undersea civilization is seeking revenge for the devastation their society has received from humanity’s underwater nuclear tests. To enact their revenge, they use Jet Jaguar to guide the race’s “savior,” Megalon, on a path of destruction throughout Japan. However, their efforts are met with a setback when Goro retakes control of his robot. The inventor then sends Jet Jaguar to bring Godzilla while the Seatopian’s call for assistance. This request reaches Space Hunter Nebula M, who sends Gigan. Jet Jaguar completes his mission and grows to a giant size. He then joins the fray in a four way battle with Godzilla against Megalon and Gigan. Condense the story a little, and one would have themselves a decent plot for a Zone Fighter episode. Unfortunately, that isn’t the case, and the lack of focus from the story is made all the more apparent during its hour plus running time. Why is their no closure on the Seatopian’s attack? Is the audience made to believe that they won’t try a similar attack in the future, or even made to understand their current blight and desperation in sending Megalon? Look no further than Atragon (1963) to see this aspect played out much more effectively. Granted, the submerged race in that film was destroyed in the climax, but the Empresses swimming off to join her dying race certainly gave the audience more of a feeling behind their ethics as whole. A stark contrast compared to the generic “rent an attacking race” feeling one gets with the Seatopians.

The simplicity of the story aside, the actors showcased here certainly do nothing to liven up the material. The lead actor, Katsuhiko Sasaki playing Goro, gives his performance by the numbers here. Although this pretty much could be said of any of his roles, as it’s no surprise the actor never really caught on with Japanese audiences. As for the rest of the cast, and I say this with the utmost sincerity, they aren’t even worth mentioning. Yutaka Hayashi as the other lead is hardly given anything to do, and makes no commendable effort with what the little he did have to work with either. Most of the focus is placed here on child star Hiroyuki Kawase, whose performance is far less appealing when compared directly with his role in Godzilla vs. Hedorah (1971), as he plays the part with a slight cockiness to his delivery.

As expected from the harsh reflection of the acting in the film, the character development itself is obviously poor, and actually gives the cast here a slight level of flack as they really had nothing to work with in the first place. The inadequacies of the character development can be easily summed up by what we learn of the characters during the course of the film. To run this off, the audience learns that the lead is an inventor, has a friend named Hiroshi who visits on a frequent basis, and is in the “company” of his little brother, Rokuro. I use the vague term “company” here as their relationship isn’t even touched on in the film. Does Rokuro live with Goro? Is Rokuro just visiting? Did their parents pass on? None of this is explored in the least as, god forbid, it might allow the audience to actually have grown attached to them. The characters are filled with lost opportunities to explore their motives here, and the film seems to be banking more on the appeal of the child star than anything else. 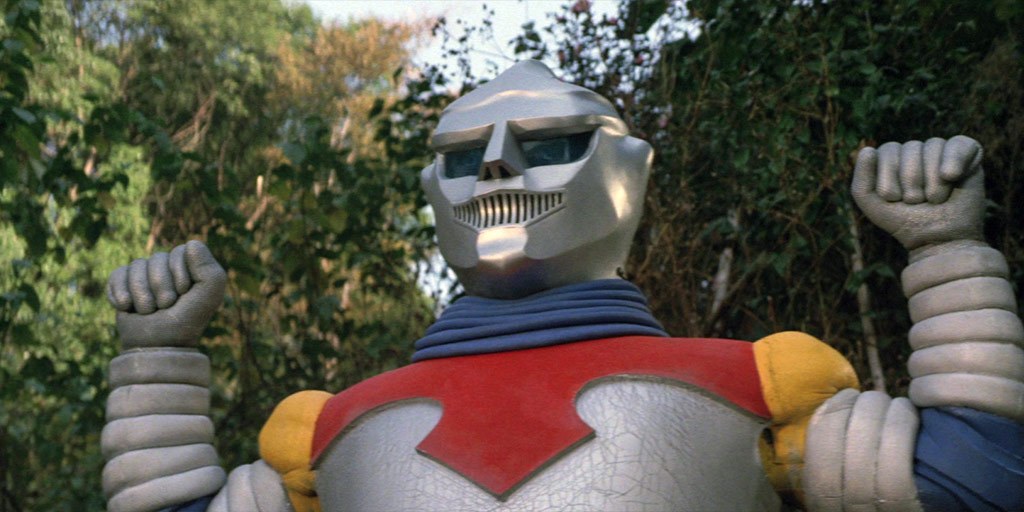 Looking past the poorly developed human element of the movie, one doesn’t see much hope in respects to the new kaiju used this time around either. The new title monster, Megalon, feels like he would be more at home in a “Sentai” based show than a Godzilla film. Megalon’s drill hands, and obvious humanoid shape for a bug creature, make the kaiju far too over the top to be credible. Still, one at least must admit that the production value on the suits itself is much better than what the airwaves were reduced to at the time. Despite all the problems with the Megalon design, he seems right at home in a Godzilla film when compared to the design for Jet Jaguar. The giant robot, spawned from a “create-a-character” contest Toho held for the film, is the most infamous thing to ever emerge from the Godzilla series. As the name would suggest, the appearance itself is enough to raise eyebrows. Featuring a gray, red, blue and yellow color scheme, Jet Jaguar’s “mouth” is in the shape of an eerie grin, while his arms look to be a combination of several rings joined together. One just has to smile every time he tries to karate chop either Megalon or Gigan, although this probably won’t be much of an issue by the movie’s end when Godzilla does his infamous “lunge kick” against Megalon.

In terms of special effects, everything done wrong in Godzilla vs. Gigan (1972) is repeated here and then some. Sadly, the stock footage is even worse this time around. In fact, this film manages to lift many of the same scenes its predecessor did just a year before. What little new special effect work that is present is none to memorable. The only exception is an impressive scene where Megalon breaks through a dam. Consequently, this gives one the impression that they blew nearly their entire budget to achieve it. That scene aside, the movie conveniently takes place mostly in the country side. When the action does go to a populated city, the stock footage begins. For example, the audience is greeted with an aerial shot of Megalon firing his beam at the city below. This is then complemented by stock footage of King Ghidorah’s gravity beams hitting the actual cityscape. To finish the scene off, Megalon does land in the city, but one never actually sees Megalon inside the metropolitan area. Instead, stock footage shots of Gigan’s lower torso attacking the city from the previous film is played. Overall, it fails to convince the audience that Megalon is there. In fact, it just draws attention at the lack of city sets.

Despite the lack of effort shown on the special effects, one might at least take some reassurance in knowing that, unlike Godzilla vs. Gigan (1972), Godzilla vs. Megalon does feature an all new score. However, such assurances will quickly be dashed as people will likely be wishing for a soundtrack comprised of stock Akira Ifukube music upon learning that Riichiro Manabe, the same individual who can take blame for the atrocious Godzilla vs. Hedorah (1971) score, was in charge of composing for this film. While Manabe does a more competent job this time around, it’s still none to pleasant to listen to. As before, Manabe does manage a few worthwhile themes. In the case of Godzilla vs. Megalon, the best would be the unlikely choice of the eerie Self Defense Force march, which, to be honest, sounds totally out of place as the SDF is mobilizing a defense and people are evacuating. In fact, it probably would have been better suited to being coupled with an invading force preparing their troops, but is still an interesting piece of contemporary 1970’s music.

In conclusion, Godzilla vs. Megalon is a film which will tarnish the Godzilla franchise for years to come. No matter how far the series manages to go, it seems likely that the general US populace will still associate Godzilla with this production.