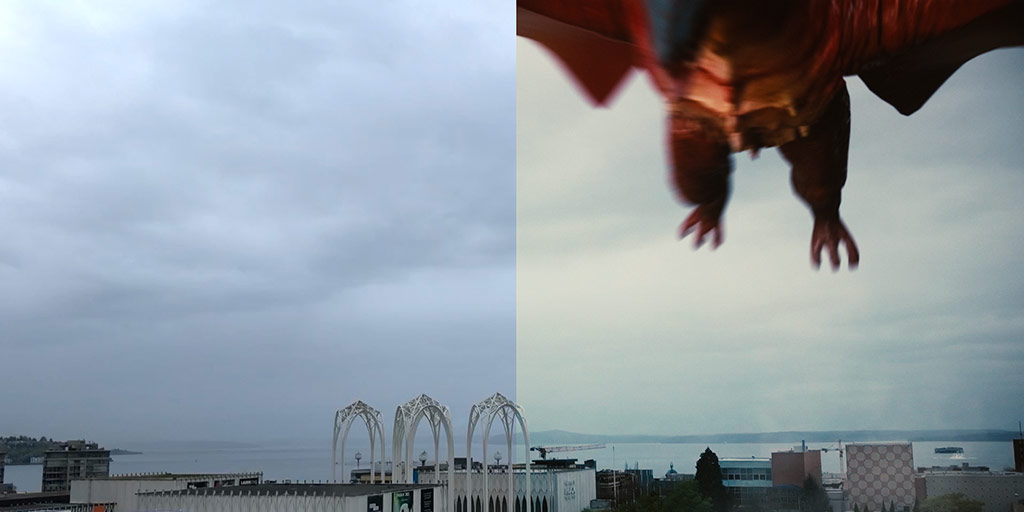 You’re in a city teeming with thousands of strangers. It’s a safe bet you won’t see any of these people again, not that you would remember them even if you did. As the city’s ambiance plays out like a disorganized orchestra and the allure of an Italian restaurant slowly reels you in, you’re suddenly snapped out of your daily routine by a violent force of nature. You don’t know what it is or where it came from. There’s only one thing you do know: the city is no longer safe.

Behind the fan video:

My friend and I were coming down from the top of the Space Needle, with a great view of the Puget Sound in our periphery, when I had an idea that I think is typical in this kaiju-loving fandom. It first started with a question: What would happen if a giant monster suddenly attacked? What would I do? Well, I’d film it, of course! I pulled out my phone and recorded the footage that I would use lateras the backdrop for my short film.

I’ve been wanting to make a short Rodan film for quite some time now. In my initial effort, I tried using my Revoltech Rodan action figure. The idea was to have the audience follow Rodan around as he soared above an unsuspecting city at supersonic speed. I was ultimately unsatisfied with how everything turned out, mostly due to inexperience, so I went back to the drawing board.As much as I liked my Revoltech Rodan, which is based on the superb 1956 design, it wasn’t meeting my expectations. Fortunately, Bandai Tamashii Nations’ SH MonsterArts had a nifty Fire Rodan in its lineup, so I went with that model. It wasn’t easy recasting Rodan. Revoltech Rodan’s attorney means business. There were talks of strikes, lawsuits, and a boycott of my YouTube channel. Serious stuff, I know. But cooler heads prevailed.

With principle photography shot and my ‘actor’ secured, I constructed my own little green screen studio. And, well, I ran into my next problem. Unlike most of the other SH MonsterArts characters, Fire Rodan proved difficult when it came to doing stop motion. He just wouldn’t cooperate. I was also using a ship model prop that was released with the Bandai Tamashii Nations Gipsy Danger (who I will definitely be using in a future project). It didn’t jive so well with the green screen lighting. No problem! I improvised. I took many pictures of Rodan in different poses before going through the painstaking process of photoshopping each one. It was totally worth it!

Finally, my creature was ready to be unleashed on Seattle. With excellent stock footage from ActionVFX and Video Copilot at my disposal, I could make Rodan’s attack look more surreal. 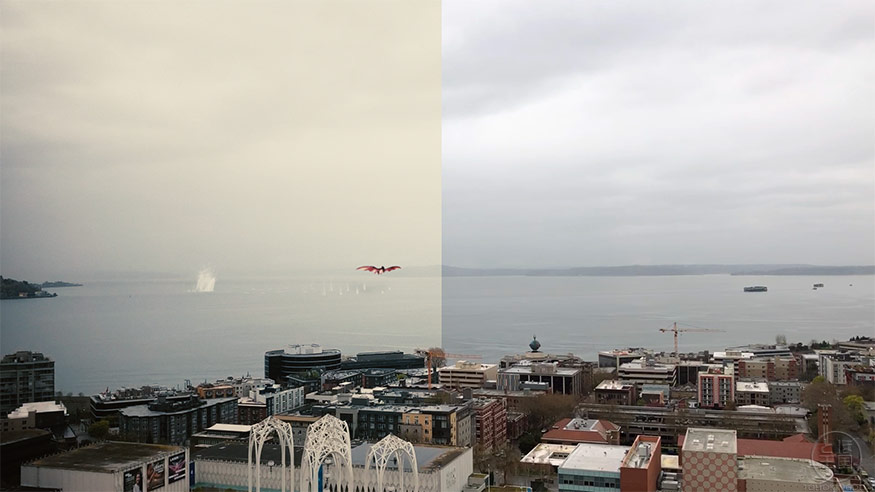 Everything is synchronized. This shot depicts the miracles of movie magic well. Original footage is on the right side… 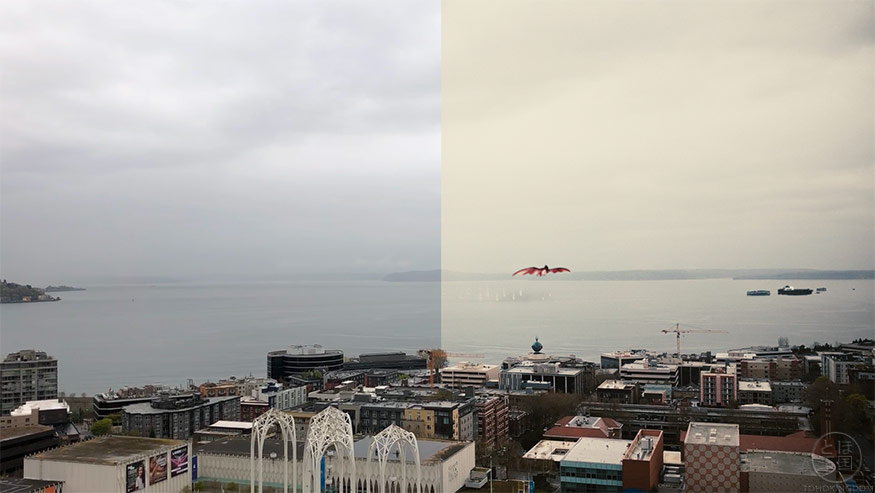 …and vice-a-versa, original footage is on the left.

Make no mistake, there will be more videos in the near future. I really like the idea of everyday people suddenly finding themselves in the presence of these rampaging monsters. And if you pause the video roughly 2 seconds in, you’ll get a small taste of what’s in store for the future of my Monster Sighting series.

If you want to see what monster is next, be sure to like and subscribe. If you have any suggestions or ideas, please send them my way, I’d love to hear from you. To any filmmakers out there reading this who have similar projects in mind, I encourage you to go for it. Despite messing up several times, I’m convinced that with a little dedication, passion, and perseverance, you, too, can make something that is larger than life.

Now take a deep breath, close your eyes, and imagine what would happen to you if your favorite giant monster suddenly attacked. What would you do? 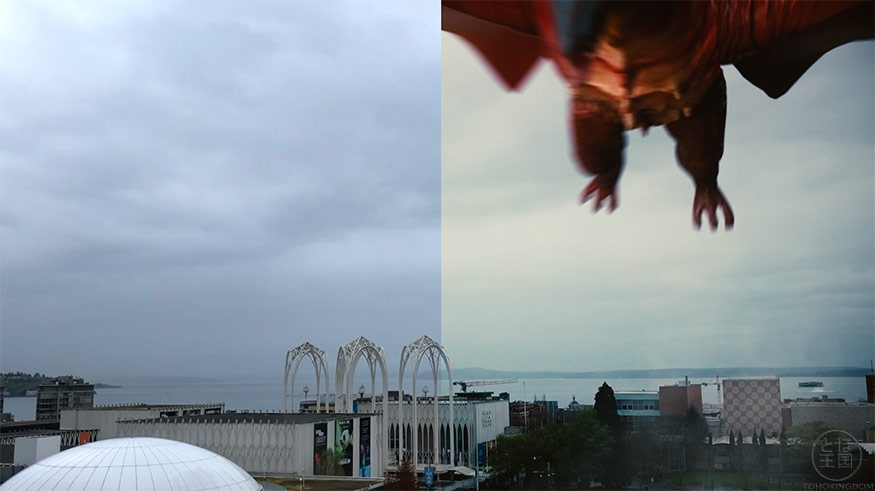 Fun to look at before and after. 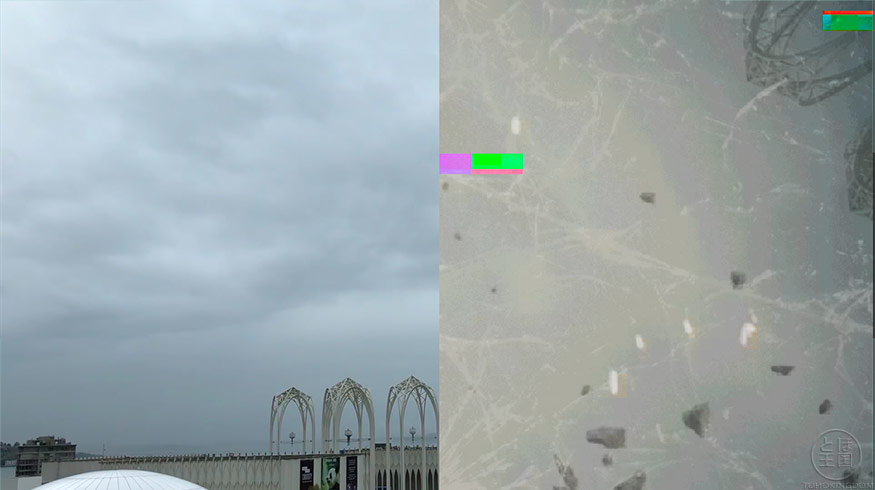 This shows that I made the frame not only shake but spin wildly out of control (which means the poor sap in the elevator had a very bad landing).

Be on the lookout for the next Monster Sightings video! Who do you want to see next? Help decide by sounding off in the comments section.