Memories of Half Human at the Kyoto Minami Kaikan Cinema
BY: Nicholas Driscoll
General // August 3, 2022

For most of my life, I have been reluctant to watch anything that was pirated or illegal. There have even been times when I sat through a pirated movie with friends, and deliberately bought a legal copy afterwards straight-up out of a sense of guilt. (That’s how I ended up with my copy of Jet Li’s The One, actually—I don’t regret it.) All that is to say, given that Toho’s Half Human (1955) has long been voluntarily banned by Toho and the Japanese version has never had a real physical release, and the American version has long been out of print (I couldn’t even find it listed on Amazon as of this writing, even out-of-stock), I wasn’t sure that I would ever get a chance to watch this lost classic. I knew that there was an illegally distributed version on the Internet, but I couldn’t (at the time) bring myself to watch it.

It must have been announced on one of the kaiju fan groups I am a part of on Facebook in the early part of 2020. I couldn’t believe my eyes. Half Human (the Japanese version) was being screened in Kyoto as a double-feature with the Japanese version of Varan (1958). At the time, I was living in Chiba, which is a good three or four hours from Kyoto by train, but I just could not pass up a chance to see this movie… even with the looming pandemic starting to materialize.

Both movies would be screening as a special feature at the Kyoto Minami Kaikan Cinema, and it was easy to secure my tickets online and snag a hotel (as few people were traveling at the time—judge me, judge me, I get it). The movie was screening on a Sunday, and I only purchased a hotel for that night. I arrived early at the theater, an unassuming little place tucked into an ordinary street not far from a Mos Burger. The showing was in the afternoon, and I snarfed a burger while I waited for my chance to enjoy some choice kaiju and kaijin madness.

The outside of the Kyoto Minami Kaikan Theater

When I returned to the theater, I got my ticket, but I soon found out that there was a sort of hierarchy for those attending the event—or maybe every event at the theater. Just about everybody else had a numbered ticket to enter, and I am still not sure how the system works even after attending another event at the same theater in March of 2022. This time I ran into an American fan who was familiar with the goings on, as he lived in the area—he had been involved with Godzilla fandom for years, and even had taken part in the early days of G-Fest. He acted as a bit of a guide for me, which I am grateful for, and he explained something about the tickets which I don’t fully remember now. My impression is that only people who paid in as special members for the cinema got the numbered tickets and so could enter in a specific order.

All of this is made more confusing for how Japanese movie theaters operate—including the Kyoto Minami Kaikan. At every movie theater I have attended in Japan (and I go all the time), attendees choose a seat when they buy their ticket—either from a ticket machine, or from a flesh-and-blood person with a map of the theater seating. I had already chosen my seat in advance when I bought my ticket online, so whether I stood in line outside or ran first into the theater, I was going to have the same seat either way.

When I returned to the theater two years later for Gigan’s 50th anniversary, I also had a problem with numbered tickets. At THAT time, I thought I had solved the problem by selecting an option when purchasing the ticket online, but it didn’t help, and it caused further headaches for other reasons. 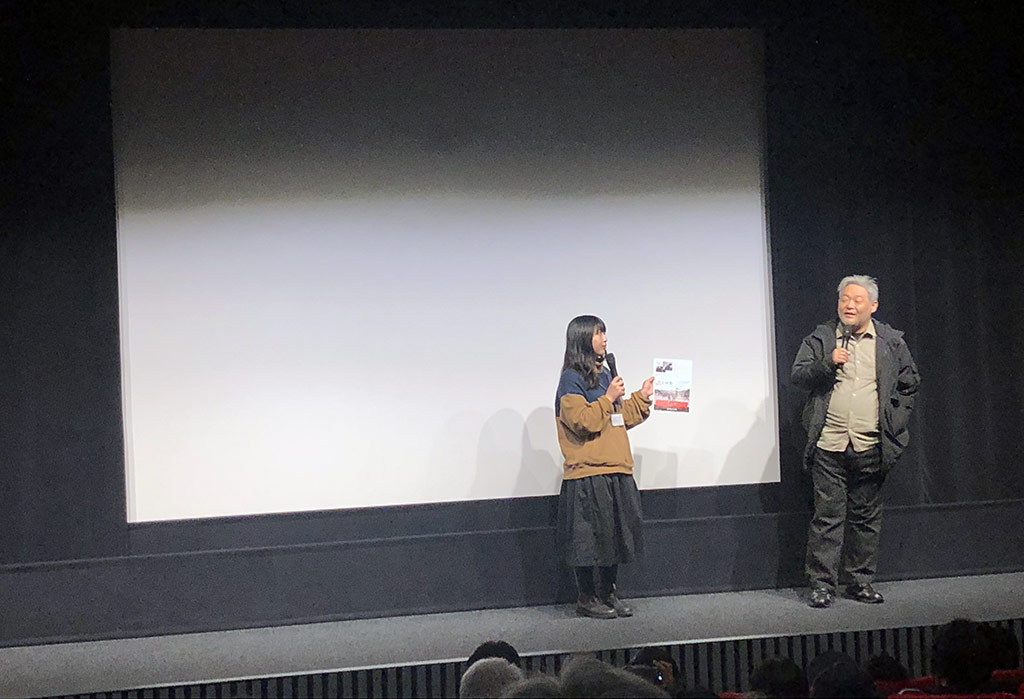 An image of the stage show–that fellow on the right was quite funny.

Back to the current tale–the double-feature that day started with Varan, and then the real stuff, Half Human. The theater was a little too warm (which was also a problem when I visited for Gigan’s birthday—the proprietor even mentioned it), and so I had a hard time staying awake underneath the luggage piled on my lap. I definitely nodded off a few times, but when I was awake, I enjoyed the movie. Varan is not a kaiju film that I revisit often; the American version is one of the worst Toho kaiju films ever made in my opinion (oh, the salination levels of the lake!), but the original Japanese flows much better, with superior pacing and more monster scenes. It still doesn’t count as a classic, but it has more impact than the sleepwalking English version.

When Half Human started up after a brief break, I felt a subtle sense of magic in the room. I couldn’t believe I was finally getting the chance to watch this rare beast of a movie. It felt surreal, to finally have this dream come true—but it wasn’t an overwhelming excitement either. I remember thinking I should be thrilled, but still, in the quiet of the respectful fandom atmosphere, the black-and-white imagery flickered and snapped across my widening eyes.

Given that Akira Takarada and Momoko Kochi starred in this as well as in Godzilla (1954), it felt like the movies were connected somehow—not least perhaps because both were based on stories by Shigeru Kayama. Takarada and Kochi seemed like an unwitting Japanese monster couple, stumbling into one creature encounter after another—I’d be delighted with a concept like that, kaiju Mulder and Scully (shout-out to Anthony Romero for that connection). The titular abominable snowmen, too, are very sympathetic, following another theme of Honda’s early films—Godzilla was a suffering animal, Rodan sacrificed himself for his mate, and the titular “Half-Human” might have been the most tragic of them all. The costume of the creature was also very effective—far superior to the Kong suits that would eventually come from the same studio. As I was watching, I recalled with relish the anecdote I read (from Peter H Brothers’ Mushroom Clouds and Mushroom Men) in which, during filming, the actor Sanshiro Sagara wore the costume back to the resort in which they were staying, and a hotel staff member screamed upon seeing him in full regalia—perhaps imagining a true yeti had appeared in the mountains of Japan. There are genuine images of power and humanity in the movie, the stark shadows lending a deeper sense of gravitas, and that scene of the Half-Human climbing the cave wall via stop-motion animation has been sizzled into my brain.

I was also really curious about how the native villagers were depicted in the film, since it was because of their depictions that the movie garnered protests, and why Toho self-imposed a ban upon the feature and never released it on physical media in Japan. The gist of the complaint for those unaware was the film has a scathing depiction of almost mutated, violent, nasty village people—which in the Japanese milieu could be and was taken as an inflammatory commentary on the burakumin, a historically ostracized people group somewhat akin to the Dalit caste from India. Given that I had just watched Varan and the seemingly equally backward worshippers of “Baradagi,” I was surprised that Half Human received a much stronger condemnation. I was struck by a certain animalistic quality in how the villagers were depicted, and the raw ferocity of Akemi Negishi’s performance as the beautiful Chika. However, the deliberately negative light the film casts on the villagers is striking. They seem not just backward, but hostile, and even Negishi’s Chika—who seems to deserve a better fate—feels judged and condemned by the narrative. That said, at least during my admittedly somewhat sleepy viewing of the movie, the deformed, inbred character of the villagers did not stick out to me as much. All of which is to say, I don’t feel at all qualified to pass judgment on the controversy, but certainly the background of the ban and the furor of the burakumin people who took offense at the film was on my mind as I watched, and I couldn’t help but wonder about that particular aspect of the film.

Half Human remains one of the least-seen of Toho’s oeuvre, and while I have realized it is not my place to say how the burakumin or anyone else SHOULD feel about the film, after watching it for myself, my sadness that the movie has been deliberately buried became more keenly felt. The narrative has its problems even outside of questionable depictions of the minority populations—the story seems to end suddenly, and for me the set up to the story felt a bit flat, among other issues. But still, even if the movie were as bad as the worst yeti movies in the world (and there are far worse than Half Human!), I would hope that the movie could be legitimately distributed in some form for fans to enjoy, even if it were to mean disclaimer bookends and maybe a documentary on the disc explaining the controversy. Banning the movie does not solve the problem of discrimination. Still, as much as I complain, that very rarity made the showing many times more meaningful to me, and I feel incredibly honored that I could attend and finally see Half Human for myself.

I have since heard about at least one other showing of Half Human in the Tokyo area, so the movie definitely still appears in select Japanese theaters from time to time. One point of curiosity I had was why no real posters for Half Human were posted at the cinema. The movie was advertised instead with what appeared to be articles and publicity shots, which made the viewing feel quite backwards.

Displays for Half Human and Varan

Also, unlike the 50th anniversary showing of Gigan, no merch was on display—I want my Yuki Otoko t-shirt! Conversely, I have not seen any showings of that OTHER banned Toho sci-fi/fantasy film, Prophecies of Nostradamus (1974). Hopefully I can get that one under my belt in the not-too-distant future as well.

A poster for the upcoming (at the time) kaiju showings at the Kyoto Minami Kaikan Theater from their website–you can see Half Human featured clearly below GMK Godzilla.