Memories of Godzilla vs. Evangelion the Real 4D
BY: Nicholas Driscoll
General // July 20, 2022

Way back in August of 2019, I had a chance to revisit Universal Studios Japan for the second Universal Cool Japan attraction that would feature Godzilla—Godzilla vs. Evangelion the Real 4D (ゴジラ対エヴァンゲリオン・ザ・リアル・4−D). Looking back, I regret (again) not writing about the ride when it was all fresh in my mind, but at the time… actually, quite often, I just enjoy attending Godzilla and kaiju-related events, and it can feel like a pain in the bottom to write down every detail. As a fan, it’s nice to sometimes just enjoy.

But still, I think the fandom at large, or at least a few people might be interested in hearing what the experience was like, so here I am, writing things up three years after all brouhaha has finished. Me, though, I am still waiting for Godzilla the Real 4D and Godzilla vs. Evangelion the Real 4D to be released on DVD. I’d buy them!

Anyway, it might help to start with some context. The Universal Cool Japan events feature famous Japanese pop culture properties adapted into attractions for the park, such as VR events and a series of enhanced short films made especially for the amusement park’s 4D theaters. Japan has a number of enhanced theaters with funky names (MXD, 4D, DBOX etc), and the ones at Universal basically are 3D with moving chairs, flashing lights, and spraying water. Given that similar enhanced theaters can be found at other locations, what makes Universal Japan’s theaters extra special is that they host original short films made especially for and which can only be viewed at the park. I have seen four of these short films now—one of the Attack on Titan films, Godzilla the Real 4D, a Sailor Moon short, and Godzilla vs. Evangelion the Real 4D. Currently, as of this writing, they have attractions for Monster Hunter, Sailor Moon, Attack on Titan, Detective Conan, and Hunter X Hunter. According to the Universal Studios Japan website, all of these are closing on August 28—except Monster Hunter, which has proven so popular that they are extending its run indefinitely! Wow! 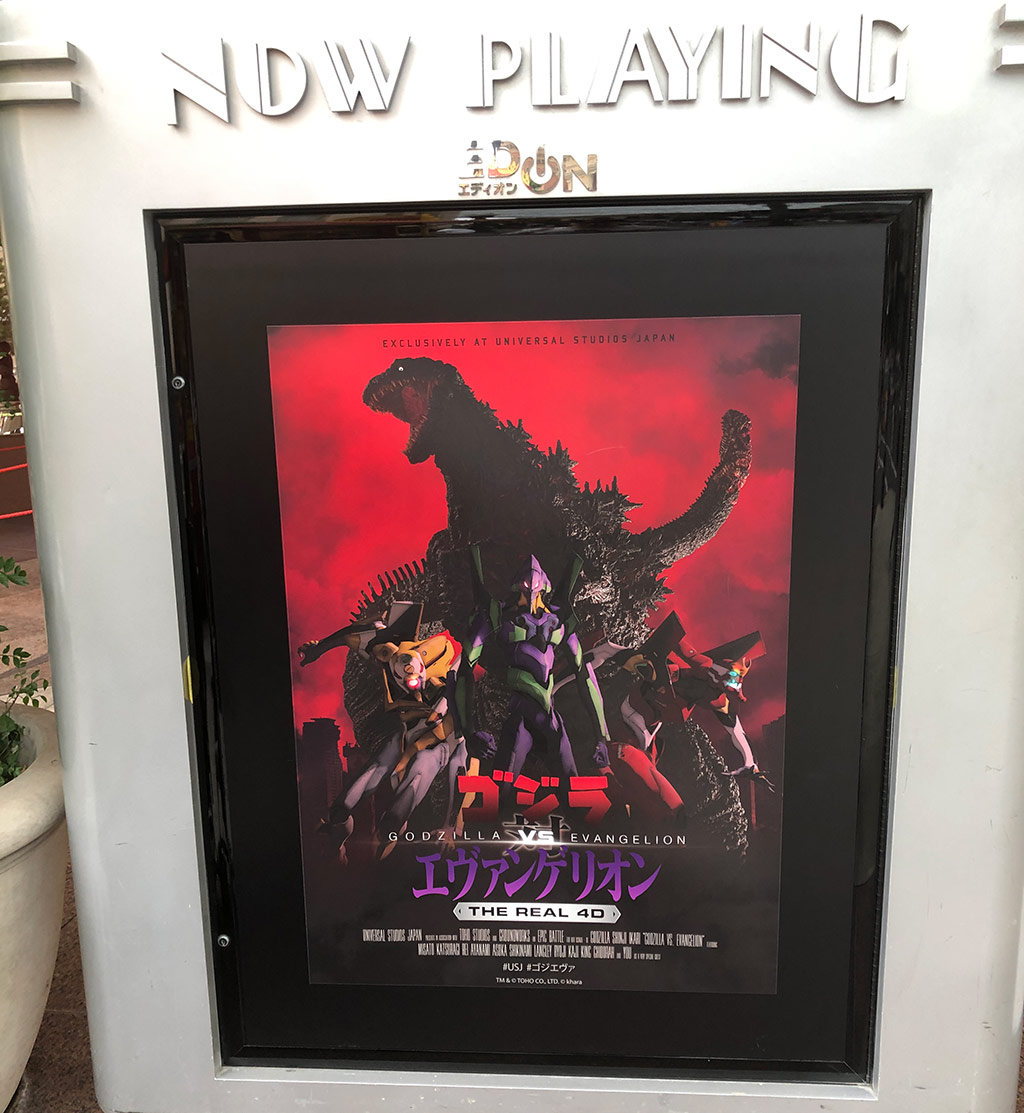 The short film, which runs about 17 minutes, was directed by Kazuhiro Nakagawa, who worked as an assistant director on the live-action Attack on Titan films, Shin Godzilla (2016), and Shin Ultraman (2022). He also directed the Godzilla Interception Operation Awaji Island short that viewers can watch at Nijigen no Mori before taking a zipline through Godzilla’s mouth (I had a chance to check it out last year, and it is SO FUN, though the short film is not as cool as this one). Nakagawa also directed the Godzilla vs. Hedorah short film made to celebrate the original Godzilla vs. Hedorah’s 50th anniversary, a short film for Godzilla Fest (which I haven’t seen), and two episodes of Ultraman Z. His first kaiju work, though, was Day of the Kaiju (2014), which features Japan dealing with the remains of a dead giant monster after a big fight—a concept that may have inspired the otherwise unrelated long-form feature film, What to Do with the Dead Kaiju (2021) from Toei and Shochiku (which was pretty bad—I wrote up a review which was published over in G-Fan magazine). I had the chance to see Nakagawa at the Atami Kaiju Film Festival in March of 2021 when they hosted a showing of Day of the Kaiju, and he gave a few remarks while Shinji Higuchi playfully mocked him from the audience. It was a good time.

Back to Godzilla vs. Evangelion, low quality video can be found of the Godzilla vs. Evangelion the Real 4D online for the curious, and the storyline has also been written out long-form on other websites. I won’t go into exhaustive detail, but I do want to make a few cogent points. The story takes place in a sort of alternate Evangelion timeframe, where Japan’s capital has been moved to Osaka III because of the extreme damage done to Tokyo II as a result of the Second Impact event from the anime’s timeline—yeah, it’s a future similar to Godzilla vs. Megaguirus (2000). Amusingly, the move was recommended by the team leader of Tokyo’s reconstruction team… a man named Mr. Yamane (an obvious reference to the professor from the original Godzilla film). This new Osaka apparently is home to lots of Godzilla fanboys, as their famous Glico running man image has been replaced by that Jet Jaguar. (They should have replaced Osaka’s equally famous giant crab with Ebirah or Ganimes, but I digress.) A lot of the world-building for the short film is provided in a series of images projected onto screens within an antechamber that visitors could view before the film commences, and also helped psyche me up when I attended. One of the images also notes that the mayor of Osaka III is named Sakurai—a reference to King Kong vs. Godzilla (1962), perhaps? 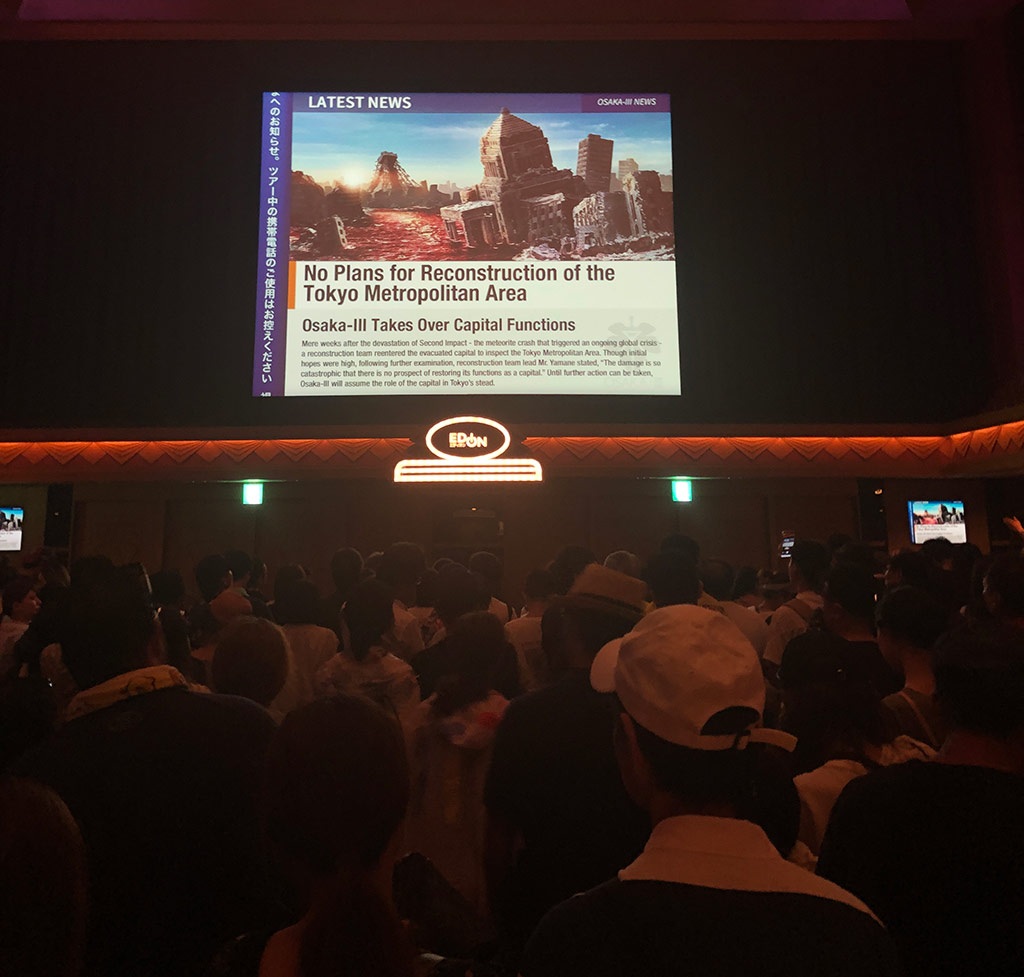 Unlike with the original Godzilla the Real 4D, which featured the conceit of attendees flying a VOTL to fight Godzilla, with Godzilla vs. Evangelion, the viewers are playing the part of visiting delegates who are touring the city of Osaka III within a huge viewing “box” called a GLAUX, the inside of which looks just like the inside of the theater. It’s a clever way to create more immersion in the experience, and the upcoming fight between monsters is viewed through the GLAUX basically the whole time—though camera angles don’t always make perfect sense, and nor do the actions of the helicopter pilots carrying the GLAUX, etc, who should have been trying to get the delegates out of the danger zone right away. I wonder just how much this short film might have inspired Godzilla the Ride, as both attractions feature a sequence wherein the vehicle in which the viewers are riding falls from the sky and deploys parachutes as part of its descent. Both also feature original designs for King Ghidorah. Anyway, I loved the use of the GLAUX as a part of the story, and one of my favorite moments in the short film was when the Eva-1 unit piloted by Shinji Hikari manages to save the box from Godzilla’s attack and accidentally smashes into a building, pushing the GLAUX through a business office and knocking over a water dispenser—triggering a squirt of water on the attendees. I thought it was a clever and funny way to work in the water spritz of the 4D theater without it being unnatural or disgusting (like with the arterial spray from the Attack on Titan 4D show I went to in 2015).

I will go over some of my thoughts on the short film here, and those thoughts will include some minor spoilers, so if you haven’t seen the short and don’t want it spoiled, maybe skip this paragraph and go on to the rest of my article. As with many crossovers with established characters, Godzilla vs. Evangelion begins with a fight between the titular titans, and then shifts to a fight with an outside threat, so we don’t really get to see who would have won if the protagonists battled to the end. This aspect doesn’t really bother me—the fight we do see between Godzilla and the Evas is fast-moving and staged well, and takes into account the personalities of the Eva pilots (Asuka’s recklessness, in particular). I really loved “Shin Ghidorah,” the way he moved, and that they incorporated the anti-gravity capabilities of his gravity beams—something which had also been a big part of the manga adaptation of the original Ghidorah, the Three-Headed Monster (1964), but which (I think anyway) has always been poorly shown in the movie incarnations of the character. Ghidorah also looks sufficiently distinct and different from previous versions without becoming almost unrecognizable ala Godzilla: The Planet Eater (2018)—I think he is one of my favorite versions of the character yet. Godzilla, meanwhile, is given a pseudo-heroic stance—he seems to have shown up specifically to fight Ghidorah, and is not therefore depicted as a villain, which seems strange given that the Shin Godzilla design was used. Shin Godzilla is one of the ugliest and most threatening versions of Godzilla created, so to refashion him as a sort of hero feels a bit unnatural—kind of like if Godzilla from GMK returned to fight evil, for example. My biggest complaint for the whole short, though, is probably just how incongruous the anime human characters are with the realistic backgrounds and monsters. When Asuka and Shinji appear on screen, but they are just cartoons, it’s jarring. However, this aesthetic choice is not very unusual; at USJ that same day, they had an Attack on Titan show with the same issue.

The Godzilla vs. Evangelion short is one of my favorite Godzilla events I have attended in Japan, and I join with the fans wishing for not only a release of the short film on physical media or streaming, but also some further use of Shin Ghidorah. (That’s why I was pleased when this version of Ghidorah DID show up again at the Joypolis attraction in 2021, but I will cover that in a separate article.)

Along with the short film, USJ also sold many goods capitalizing on the crossover event, such as the King Ghidorah toy pictured above. When I went to Godzilla the Real 4D, I attended on the last weekend of the promotion, and they had already sold out of their Godzilla meat buns. This time, though I attended towards the end of the run, USJ was still selling the Godzilla vs Evangelion Jelly Drink for 550 yen, but had already sold out of their Evangelion-style Mechagodzilla popcorn buckets (which I wouldn’t have purchased anyway—40 dollars for something I would never use???). The jelly drink—well, it’s been so long I don’t remember much now, but I liked it/ The flavor was sweet, fruity, with bits of jelly and berry seeds inside that crunched. 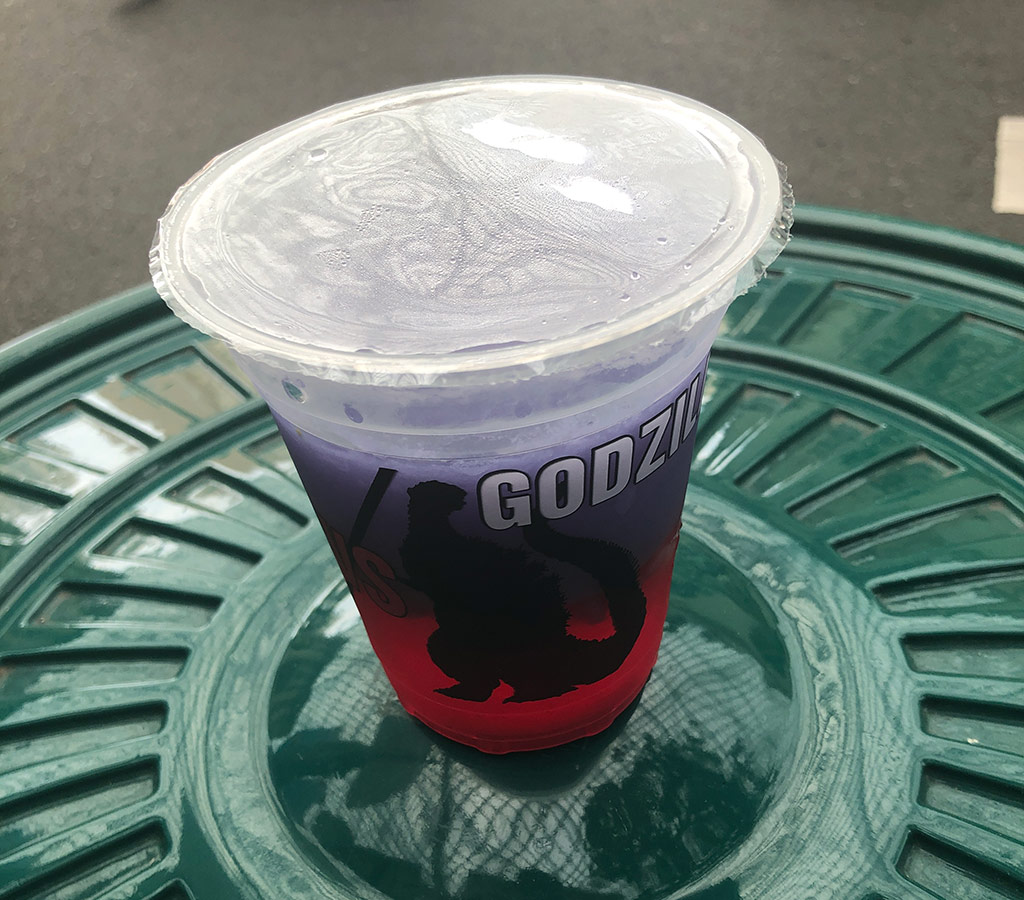 The other food item I bought was Godzilla vs. Evangelion Print Cookies, which came in a variety of designs and were housed in a nifty tin box. The print cookies were similar in taste and design to previous Godzilla print cookies I already reviewed for the website—they are mildly sweet, basically like short-cake, and fun to share.

The biggest difference between this set and others I have purchased was the tin box, which is really a nice, useful container which I ended up giving away to friends.

Finally, I spent a bunch of extra cash on a Godzilla vs. Evangelion cap (one of my favorite caps that I still frequently wear), as well as a Godzilla plush hat, and other goodies—the sorts of things that kind of pile up in your house, but bring back memories.

I have a lot of fine memories from that outing to USJ. The Attack on Titan show, which briefly replaced the Terminator 2 attraction, had live Titan costumes and a “full-size” Colossal Titan head that appeared behind the audience, as well as nifty projection effects of the human warriors and their vertical maneuvering equipment. I also had a chance to try out the majority of the remaining rides at the park that I had wanted to see before, such as the Backdraft attraction (which felt like stepping back into the 1990s), the Harry Potter roller coaster, and a few others. I spent way too much money on my trip, but I had such a nice time—a great memory from one of my best years in Japan. I am really grateful for the opportunities I had that year, and I continue to look back with great fondness for the chances I had then to enjoy such a unique event from my chosen favorite fandom.