“Millions of years ago, Godzilla and Kong’s ancestors waged a cataclysmic war. Who won? Discover the mystery of how their ancient rivalry ended — and what other threats may still be lurking in the shadows of the MonsterVerse.”

Michael Dougherty (Godzilla: King of the Monsters, Krampus and Trick ‘r Treat) once pitched a Godzilla B.C. movie. The story would primarily center around Godzilla and his fellow Titans, with limited human involvement. While the logistics of doing a kaiju-only feature-length film would be expensive, risky, and bold, it was an intriguing idea nonetheless. So much so that it inspired me to create a Godzilla B.C. proof of concept.

On multiple occasions, Godzilla vs. Kong (2021) mentions an ancient rivalry between the titular monsters. While comics and novels have helped shed light on some of the underlying mysteries of the MonsterVerse, there is still a lot we don’t know. My fan film doesn’t answer any of these questions. It is a fan film, after all. However, the purpose behind Titan War is to demonstrate the feasibility of this idea and why seeing something like this on the big screen would be spectacular.

If you haven’t watched the movie yet, check it out! Please leave your thoughts in the comments section. Otherwise, please sit back and relax because I’m about to reveal my moviemaking secrets.

Scripts are imperative. Without them, there is no story. But stories are abstract by their very nature. To tell your story through a cinematic lens, especially if your plot is VFX heavy, you will need storyboards.

Take a moment and look at these examples. 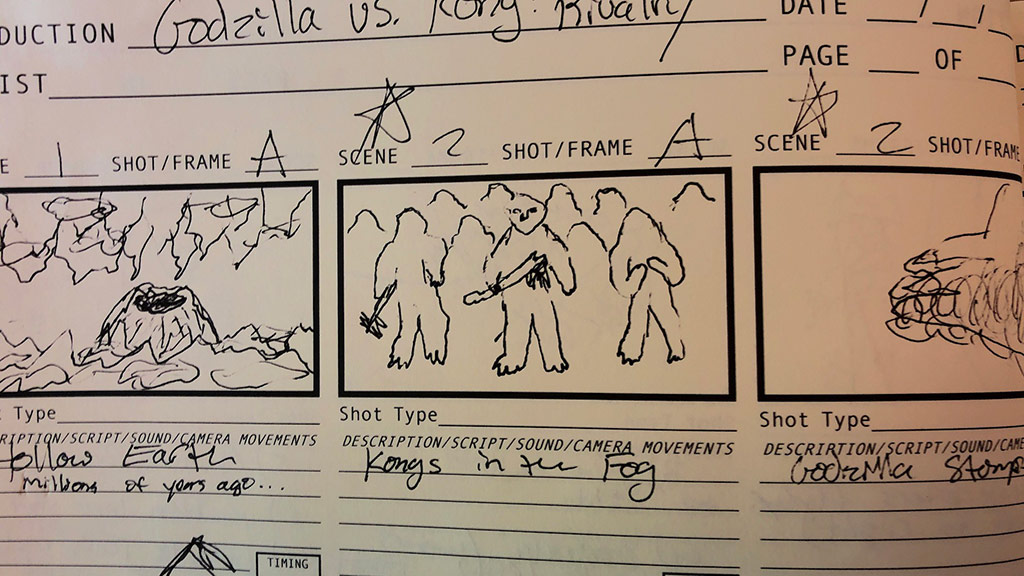 These are some of the storyboards I used. How would you plan your production out if you were producing a similar film? What would your budget and timetable be? Do you already have assets at your disposal, or do you need to acquire more?

One proven method of answering all these questions is to find out for yourself. Start small. Draw 1-3 panels (following the beginning, middle, and end adage). Grab a camera and a few action figures, and go for it!

Let’s pay special attention to this last storyboard. We’ll be using it for reference.

In the sequence we’ll analyze, Godzilla and Kong’s armies meet in battle! There are three Godzillas and several Kongs. To make this scene work, I had to plan it out one beat at a time.

First is the environment. In previous VFX comps, I designed the Hollow Earth to my liking and saved these digital sets so that I could use them as many times as I wanted. With a few minor tweaks, my background is ready.

In the span of a few seconds, all hell breaks loose. But to create chaos, there needs to be an element of order. I divided this battle royal into three groups: Back, Middle, and Front. Sounds pretty simple, right? That’s the point.

Due to having a limited budget, I was fortunate enough to have different Godzilla and Kong figures. I relied heavily on the S.H. MonsterArts toy line. For Godzilla, I used S.H. MonsterArts Godzilla (2014) and Godzilla (2019), with the former being used twice as there are two G’14’s in the story. G’19 served as the Alpha. Standing in for several Kongs were the S.H. MonsterArts 2005 and 2021 models. Suppose something like this ever does happen in a Hollywood blockbuster. In that case, I’d imagine every Godzilla and Kong would look distinctively different, which would be a nice artistic touch.

One Godzilla (S.H. MonsterArts Godzilla 2014) collides with one Kong (S.H. MonsterArts King Kong 2005). The former instantly overpower the other and knocks the poor Kong offscreen. There’s a second Kong standing in-between, but he, too, is swept up in Godzilla’s wake.

Exploding rocks have been added to mark where the monsters clash.

Next, Godzilla’s tail swats a third Kong (S.H. MonsterArts Kong 2021) so hard the great ape is forcibly sent sliding across the soil. The slide leaves a trench in its wake because I believe whatever happens to your characters should somehow affect the environment.

In an instant, a 2005 Kong armed with a MonsterVerse Battle Axe delivers a thunderous strike, knocking the poor Godzilla back.

Here, we’ll add a nifty glowing effect to Kong’s ax, Godzilla’s blood (make sure to blur and darken this out a little), and exploding sparks.

I knew I would animate The Middle Group last in the sequence of events. 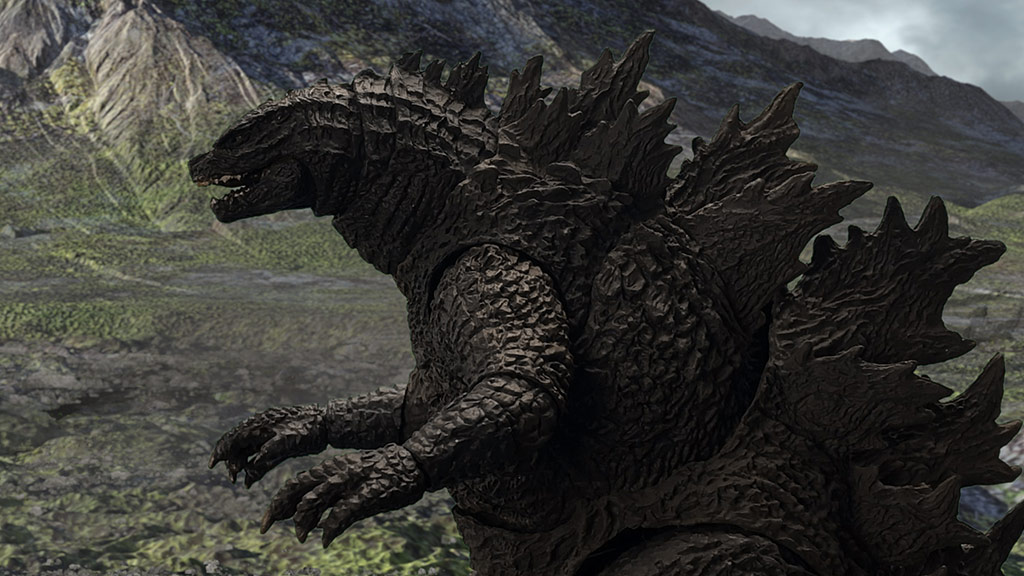 With all this carnage unfolding around him, the Alpha Godzilla (S.H. MonsterArts Godzilla 2019) steps forward.

Atomic energy surges up to his bony dorsal spikes. As his eyes glow blue, Godzilla unleashes his nuclear death ray.

Godzilla is more than the King of the Monsters. Unleashing his power has an immediate effect on the environment. Fire embers emphasize further how dire the situation is for Kong. 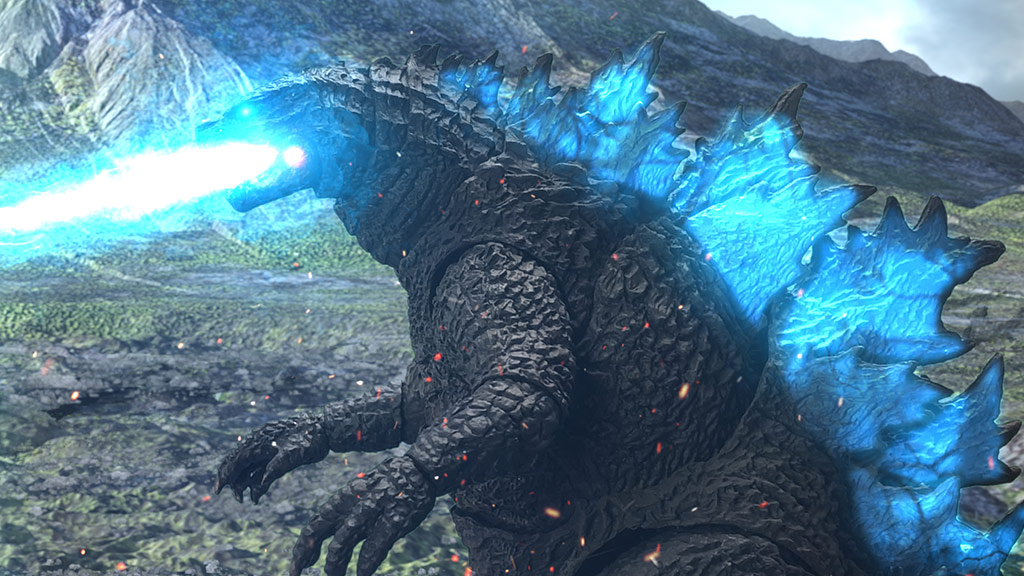 A subtle flare effect is added. When Godzilla breathes atomic fire, the area around him lights up.

Time for the VFX equivalent to a Swiss army knife.

Red Giant’s Supercomp is a Motion Graphic Artist’s best friend forever. We’ll use the Alpha Godzilla as our main subject as a small sample of its capabilities.

First the Light Wrap. The main goal here is to help your viewer believe your subject is standing there in the environment.

Next is Haze, which helps add more light/texture to Godzilla’s edges.

Volume Fog is arguably the most vital element at work here. Notice how Godzilla casts a shadow? Not only are shadows cast over the ridges of his neck, shoulder, and arms, but his dorsal spikes are also casting shadows.

Diffusion helps wrap everything up, acting as a lynchpin for the Light Wrap and Haze functions.

Godzilla now looks like he’s part of the environment! But we’re not finished yet.

Godzilla’s glowing eyes and dorsal spikes have been altered in Supercomp. Here, the glow effects interact with the subject and environment, enhancing the immersive development. 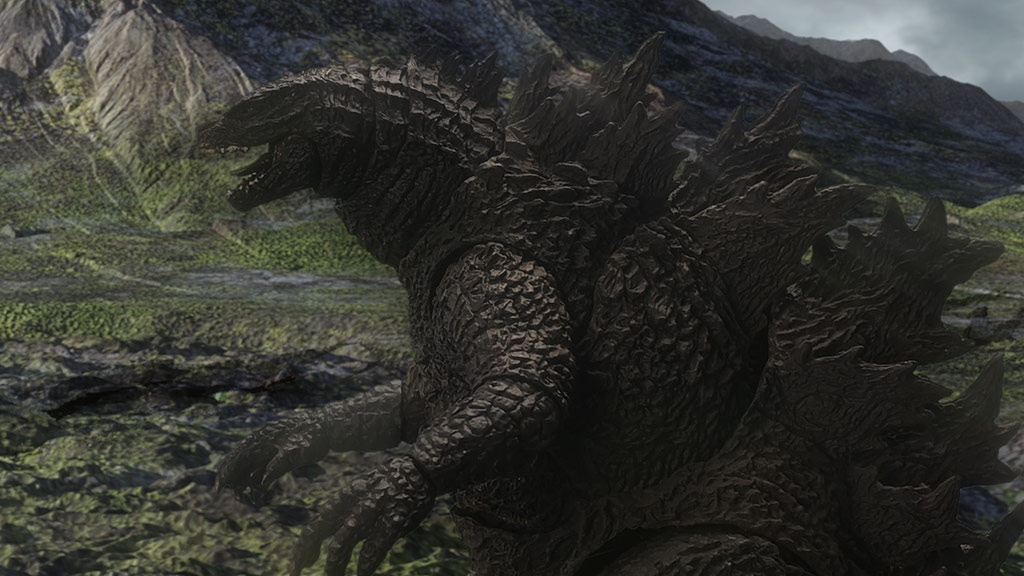 Thank you very much for reading. If you want to see the ancient war between Godzilla and Kong’s ancestors make it to the Big Screen, please consider liking and sharing my video. It may not seem like much, but studios pay attention to what the fans want. Even a fan film can demonstrate the efficacy of an idea—especially when it’s something many of us want.

At the time of this writing, the MonsterVerse is one of the few cinematic universes alive and active. There are so many more stories to be told, mysteries to solve, and awe-inspiring giant monsters to remind us why we love these movies.