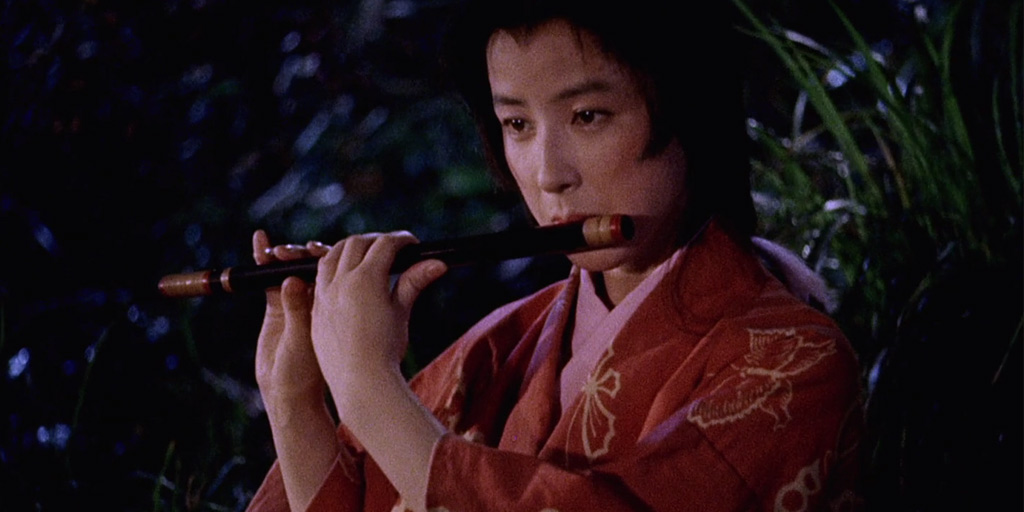 In 1947, a blossoming filmmaker at Toho named Senkichi Taniguchi started production on the crime thriller Snow Trail, his second directorial effort. Having previously helmed the star-studded musical Toho Show Boat (1946), he was ready to expand his creative spectrum, channeling his energy into a straight-forward caper about three criminals who rob a bank and then flee into the mountains with their loot. In what marked another significant difference from his first movie, Taniguchi was forced to fill his cast with lesser-known or even completely unknown actors—as the studio had recently lost most of its established “box office” talent during a labor union strike and, per the speculations of one actor, wasn’t keen on their remaining “big name” stars shooting on location in the rugged mountain wilderness*. Among the newcomers appearing in Taniguchi’s film was a vibrant young actress by the name of Setsuko Wakayama, whom the director married two years after the film’s release and divorced seven years after that.

Around the time his marriage to Wakayama ended, Taniguchi took charge of the rousing period piece The Maiden Courtesan (1956), during which he collaborated with Kaoru Yachigusa, who had been appearing in films for half a decade and had recently been subject to an attempt on Toho’s part to be rendered into the next international film star. History seemed to repeat itself a year after The Maiden Courtesan’s release, when Taniguchi and Yachigusa married (the second time the former wed an actress from one of his movies). This union, however, would not end in divorce: the couple remained together for the rest of Taniguchi’s life, Yachigusa supporting her husband as his career disintegrated in the 1960s, dedicatedly looking after him when ill health plagued him some decades later. As for Yachigusa’s career: Toho’s ambition to make a globally recognized name out of her never exactly came to fruition, but she nonetheless continued to enjoy domestic popularity in film and television—all while remaining at her husband’s side until he passed away in 2007.

Kaoru Yachigusa in The Human Vapour

In thinking back on the film career of Kaoru Yachigusa (who died on October 24th this year, age 88), the dominant image that again and again comes to mind is one not identical but somewhat akin to what one imagines through recalling her marriage to Taniguchi: one chiefly remembers the many times she played passionate—sometimes even self-sacrificing—women unrelentingly supportive and caring (or as film historian Stuart Galbraith IV once wrote, “willing to forfeit everything up to and including her own identity”) for the men they loved. This is not to say that Yachigusa’s acting and performances were confined to the parameters of such roles; her career, after all, lasted almost seven decades, proffering a variety of characters to play; and I have been told that, through her work in television in the 1970s and onward, she found a new screen image as an “ideal” housewife and mother (though I have not seen any such shows of hers and thus cannot comment on the matter). But again, what I remember first and foremost is her embodying romantic perseverance and how she played different variants of this sort of character—beginning with what is unquestionably her most famous role.

Produced three years after Yachigusa’s screen debut in 1951, Samurai I: Musashi Miyamoto (1954) on the surface might’ve seemed to have been merely the latest of countless movies based on the life and lore of the samurai/author of the title (director Hiroshi Inagaki himself made a few films about Miyamoto prior to this one). But the 1954 Toho spectacle in question was concocted and presented as something much grander, featuring huge sets, hundreds of fully costumed actors and horsemen, and touting a budget of roughly $500,000, the second largest ever afforded to a Japanese film at that time**. Appearing in such an enterprise—and opposite a huge star like Toshiro Mifune, no less—granted Yachigusa more visibility than ever and arguably started establishing the persona still associated with her today. “It was my first adult role,” Yachigusa recalled decades later, “so I didn’t know what to expect. Musashi and Otsu are shy and awkward with each other, but I think there’s great love between them.” 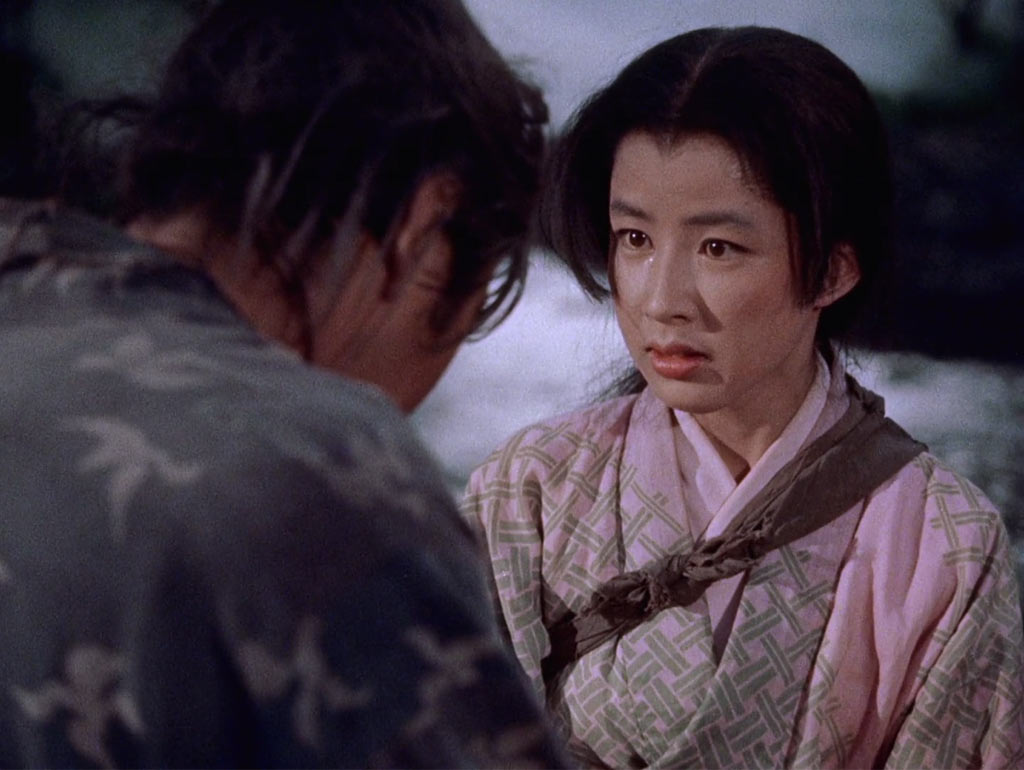 Toshiro Mifune and Kaoru Yachigusa in Samurai I: Musashi Miyamoto

The film takes its foundation from a Hideji Hojo play based on part of Eiji Yoshikawa’s serialized novel about Miyamoto, and places heavy emphasis on the relationship between the burgeoning samurai and the immaculately beautiful Otsu, whom Yachigusa portrays. And in contrast to the film’s two sequels—Samurai II: Duel at Ichijoji Temple (1955) and Samurai III: Duel at Ganryu Island (1956), which generally charged Otsu with following Musashi around, to the point where another recurring character played by Mariko Okada became the more interesting love interest—Samurai I: Musashi Miyamoto presents Otsu as a fully drawn person with contextualized struggles extending well beyond those in her romantic tenacity.

Yachigusa portrays Otsu as a fragile person emotionally battered by those around her (betrayed by her fiancé; cornered and tormented by her betrothed’s family). She initially blames Musashi for pulling her fiancé toward the path of war—and thus away from her—but later comes to identify with him once society rears its ugly head; both of them have been betrayed by the people in their lives (Otsu realizes her fiancé was not worthy of devotion after he marries another woman; everyone in Musashi’s village compliantly joins forces with the warmongers seeking his death) and feel completely and utterly alone, with no one to seek consolation from besides each other. Otsu’s empathy culminates with an initiative to save Musashi after he’s captured, followed by a beautifully romantic scene of the two characters reconciling on the banks of a stream. And then there’s the heartbreaking finale in which Otsu’s left behind as the man she loves wanders off to begin his journey as a samurai. 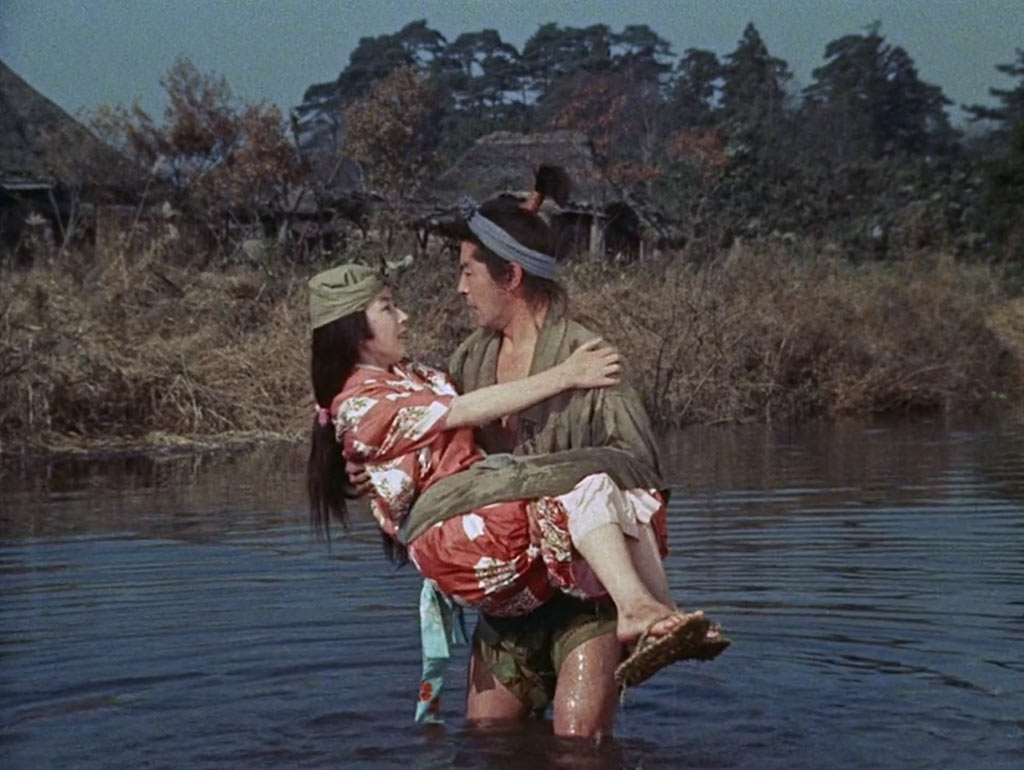 Otsu and Musashi in Samurai III: Duel at Ganryu Island

Samurai I: Musashi Miyamoto pivots on Mifune’s transformation from a glory-seeking ruffian into a cultured swordsman, but it is the relationship between him and Yachigusa that makes up the picture’s emotional core. And while I do take issue with how Otsu became a tad too sidelined as the trilogy went along, the character’s lasting commitment to Musashi nonetheless embodies Yachigusa’s screen image as self-sacrificing woman who only wants to be loved. Moreover, she did have some powerful moments emphasizing the pain her character was going through: watching Musashi change before her eyes, losing her strength (both physical and emotional), finally reaching the point where, at the end of Samurai III: Duel at Ganryu Island, she can barely go on. And even when at long last she is able to be with the man she loves, she cannot escape the realization that, due to their experiences, things will never be the same. As she laments, “I wish you were still the [man] I used to know.” I have many reservations with the finale of this trilogy, but there are jabs of touching melancholy stemming from Yachigusa’s character, and the actress delivers them faultlessly.

To reiterate, Kaoru Yachigusa by no means only played quietly hurting women like Otsu, for she did at times break away from her screen image or, more interestingly, perform variants of it. During Toho’s trial run efforts to create a name for her overseas, Yachigusa was often cast in lavish international productions such as The Legend of the White Serpent (1956), co-financed by Hong Kong’s Shaw Brothers Studio and based on a popular Chinese legend, for which she acted as a voice of reason amid a doomed relationship between two others. Before that, she’d played the titular role in the 1954 Madame Butterfly (joint-produced between Toho, Rizzoli Films, and Gallone Productions), which came from a stage adaptation of Giacomo Puccini’s opera—in essence allowing her to enact a western rendition, if you will, of her usual part of a Japanese woman suffering from heartbreak. 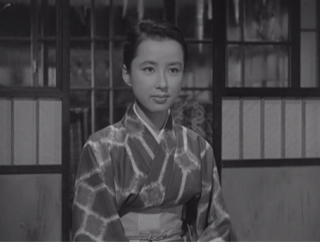 On Yachigusa’s home turf, the 1957 adaptation of Yasunari Kawabata’s novel Snow Country again placed the actress within the framework of a woman devoted to the man she loves, but this time she’s characterized as fiery and passionate, outspoken and protective, pouring her heart into caring for someone too ill to care for himself. (And let it be said her performance is by far the best thing about this production: she captures the exact image I had of the character when I read the novel.)

On occasion, Yachigusa played objects of romantic obsession, as in Ishiro Honda’s science fiction thriller The Human Vapour (1960), itself, as many have described, something like a Japanese variant of The Phantom of the Opera. Another example was her appearance in the long-running Tora-san series, where she captured the interest of Kiyoshi Atsumi’s beloved ne’er-do-well.

And for an example of Yachigusa enacting a spin on a different kind of superficially familiar material (in this case the role of a dutiful housewife), I would like to salute a film which I saw just a few months ago. In Yoshimitsu Morita’s family comedy Like Asura (2003), Yachigusa was once again paired up with Tatsuya Nakadai (they’d previously played husband and wife in the 1987 tearjerker Hachiko) in a story revolving around an extra-marital affair on the husband’s part which is found out by the married couple’s four adult daughters.

Yachigusa plays the mother with what appears to be sweet naïveté, seemingly oblivious not only to her husband’s trysts but also to the true nature of the comedic scrambling that occurs when his “activities” are reported in a local paper. (There’s a great scene where Nakadai’s trimming his toenails and Yachigusa spreads out newsprint beneath his feet to catch the clippings, “coincidentally” opening it to the page broadcasting his secret. One of their daughters stops by to steal their copy of the morning edition—so that her mother doesn’t read it—and fearfully waits until both parents leave the room. She snatches the paper and, when Yachigusa re-enters, lamely pretends to swat a cockroach to explain her having crumpled it. Yachigusa remarks she hasn’t read the paper yet and reaches for it, resulting in a tug of war between the two women, the daughter sweating bullets, the mother perplexed.)

In the picture’s finale (I am about to give away the ending, so read this last paragraph at your own discretion), the mother has succumbed to a sudden illness and the daughters discover that she in fact had been the one who leaked news of their father’s philandering to the press—to which they enjoy a tearful laugh. At this point, the audience is prompted to look back on Kaoru Yachigusa’s character and performance and put the dots together: now we realize she’d laid out the paper at her husband’s feet with the intention of him inadvertently reading the story in question; now we realize her sweet and out of it persona wasn’t so sweet and out of it after all; there were hints in her behavior the whole time, but they were hints one does not notice without the benefit of hindsight. A fine script enhanced by subtly comedic acting from a marvelous film actress whose range and natural grace will be missed. 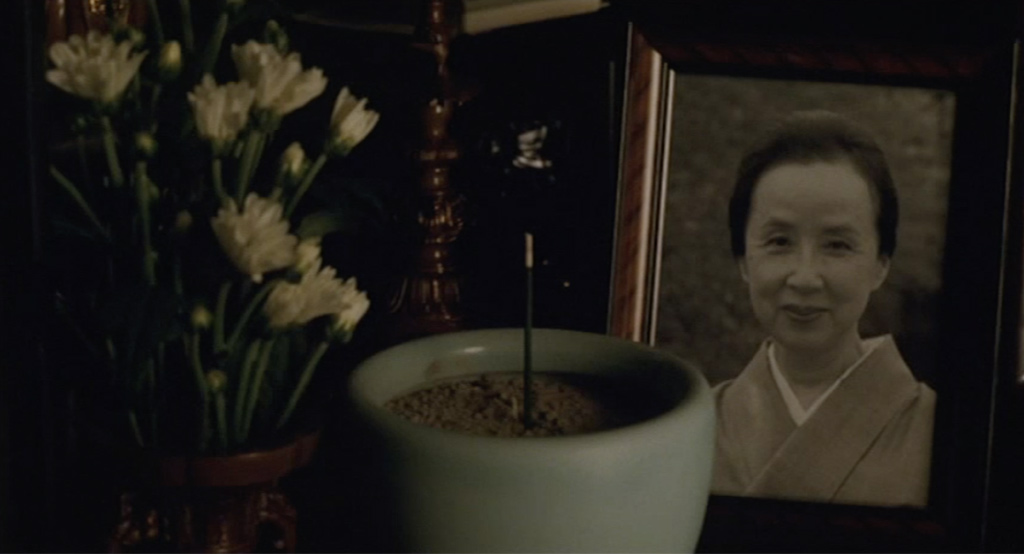 Rest In Peace, Kaoru Yachigusa (image from Like Asura)

* The actor who made this speculation was none other than Toshiro Mifune, who made his acting debut in Snow Trail, directed by Kaoru Yachigusa’s future husband, Senkichi Taniguchi. Mifune later recalled: “I think the reason I got the part was because of the physical risks involved. Because the big stars had left Toho from the strike, I was chosen to co-star in Snow Trail. […] It called for a great deal of mountain climbing, and I believe the studio felt an unknown actor was more expendable.”

** The budget of Samurai I: Musashi Miyamoto was pretty close to that of Akira Kurosawa’s Seven Samurai (1954), which was released earlier that same year and cost somewhere between $560,000-580,000.

Galbraith, Stuart, IV. The Emperor and the Wolf: The Lives and Films of Akira Kurosawa and Toshiro Mifune. New York: Faber & Faber, 2002