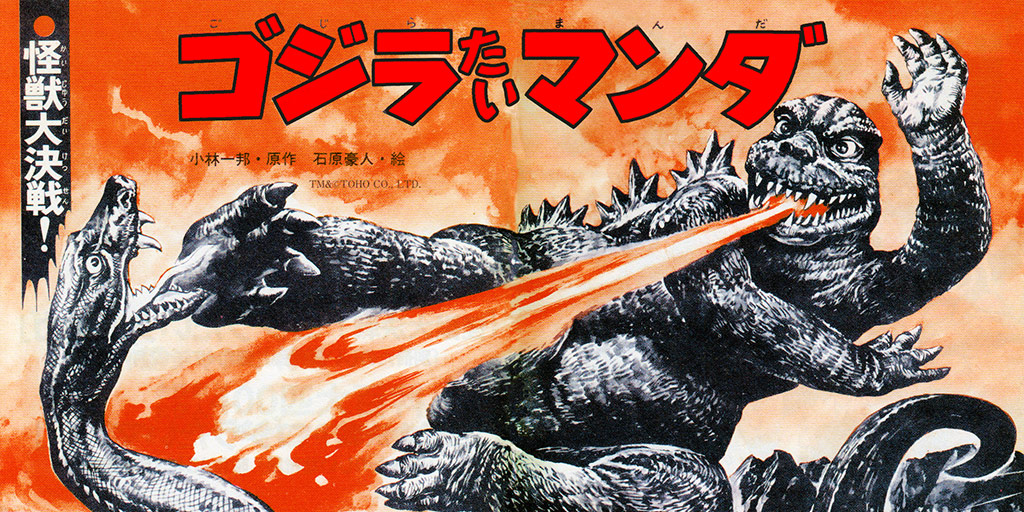 Recently I reviewed a brief Godzilla manga adaptation based very loosely on 1972’s Godzilla vs. Gigan, which appeared in the magazine Fun Kindergarten (or TanoshiiYouchien) back in the year of that film’s release. That child-centric publication also featured other Godzilla-related publications, including (in the Bessatsu version of the magazine) short stories similar in format to the Giant Monster of Justice Godzilla series which I wrote about some time ago. Unlike with that series, however, the short stories that I will be covering here are if anything more obscure. Whereas with Giant Monster of Justice I occasionally stumbled upon images from the stories online, I never saw images from these stories crop up anywhere previous to reading their reprints. The two stories I own, also, are much less interesting than the Giant Monster of Justice works, being as they do not feature any original powers from the monsters (such as the way in which Gigan could levitate the pyramids in one episode of Giant Monster of Justice), nor the very strange plot threads and grotesque imagery (such as having monsters kidnapping pandas, and the horrific deaths of Gezora and Manda in that series). Still, these tiny tales are an often overlooked part of Godzilla history that deserves remembering if not quite celebrating and I want to visit them again here with rough translations and comments.

The two episodes I have in the Kaiju Big Decisive Battle series are not comprehensive of all those published in BessatsuTanoshiiYouchien, and I am not sure how many overall appeared in the magazine, nor even if they were restricted to only Toho kaiju. The two I have were reprinted in the Godzilla All-Movie DVD Collectors Box set for Godzilla: Final Wars released in 2017—the same one that featured the Godzilla vs. Gigan comic. However, a quick Internet search reveals that there was at least one more entry in the series, from the October 1972 issue: “Godzilla vs. King Ghidorah”. A picture of the story can be found on the Mandarake website featuring the issue in question, which had sold for around two hundred dollars (!!). This story would have been the first published of the three I am aware of, as “Godzilla vs. Kumonga” was apparently published in the December 1972 issue, and the “Godzilla vs. Manda” issue was published in the March 1973 issue.

Let’s briefly touch on “Godzilla vs. King Ghidorah” before moving on to “Godzilla vs. Kumonga” and “Godzilla vs. Manda.” From the image featured on the Mandarake website, we can translate at least part of the story, as well as glean who wrote the tale and who illustrated it. The author and illustrators’ names are a bit hard to read because of the low-res image and because of the colors, but the author is the same person who wrote the other two in the series, one Kazukuni Kobayashi—yes, the same fellow who wrote the Godzilla comics series from Friend (Tomodachi) magazine around the same time. It appears Mr. Kobayashi is most well-known for having written the script for Jun Fukuda’s Comedy of Damashi’s Humanity and Justice from 1974. (While no author was given for the Godzilla vs. Gigan manga adaptation from Fun Kindergarten, I would not be surprised if it was Kobayashi again.) The artist for both “Godzilla vs. King Ghidorah” and for “Godzilla vs. Kumonga” was Ryuu Noguchi, who was a prolific illustrator and comics illustrator who did illustrations and character designs for a wide variety of tokusatsu properties in the 70s, 80s, and 90s—including many Super Sentai, Kamen Rider, and Metal Heroes series. Heck, he did character designs for Dinosaur SentaiZyuranger. According to the RangerWiki, he was responsible for some of the iconic monster designs I grew up with when watching the original Mighty Morphin’ Power Rangers program, such as one of my faves, Dora Boogaranan, known as Terror Toad in the Rangers version!

The two pages available from “Godzilla vs. King Ghidorah” can be translated as follows:

Today is Sunday. As for Yuuji-kun’s family, they all headed out on a drive to Hakone. His father said, “We will arrive soon.” It was at that time. “Ack! It’s King Ghidorah!” yelled Yuuji-kun. King Ghidorah was rapidly approaching their car.

And that’s it. As you will soon see, the stories from this series are all very short and simple. The other two which I have were both only two pages long, but unfortunately it appears that “Godzilla vs. King Ghidorah” was slightly longer, so I can’t transcribe the whole thing. However, it’s hard to imagine that it had a much more intriguing story than the others. One feature of these stories seems to be to feature famous spots around Japan, and in the case of “Godzilla vs. King Ghidorah,” Yuuji and his family are going to Hakone, a resort town famous for its hot springs and views of Mt. Fuji. Many years after the publication of this story, Godzilla would encounter Baragon there in Godzilla, Mothra, King Ghidorah: Giant Monsters All-Out Attack (2001).

If I were to speculate, I would presume that on the second page the kids yell something like “Godzilla, Godzilla, our Godzilla,” at which the kaiju king materializes, takes a few hits from King Ghidorah’s gravity beams, and then just wallops the space dragon into submission with Godzilla chops, Godzilla kicks, and maybe a Godzilla body slam. Then the kids probably yelled, “Thank you,” and Godzilla bowed out. That’s the pattern for these tales, as you will soon see in the following two stories.

Let’s move on to “Godzilla vs. Kumonga.”

Here are the Tottori Sand Dunes. Haruhiko-kun and Tomoko-chan, in a fit of great exultation, dash around and fall down the sand mountains. At that time, a 45-meter giant spider appeared.

Kumonga came chasing after. Then, from his butt, spider web issued forth and wrapped around both of them. 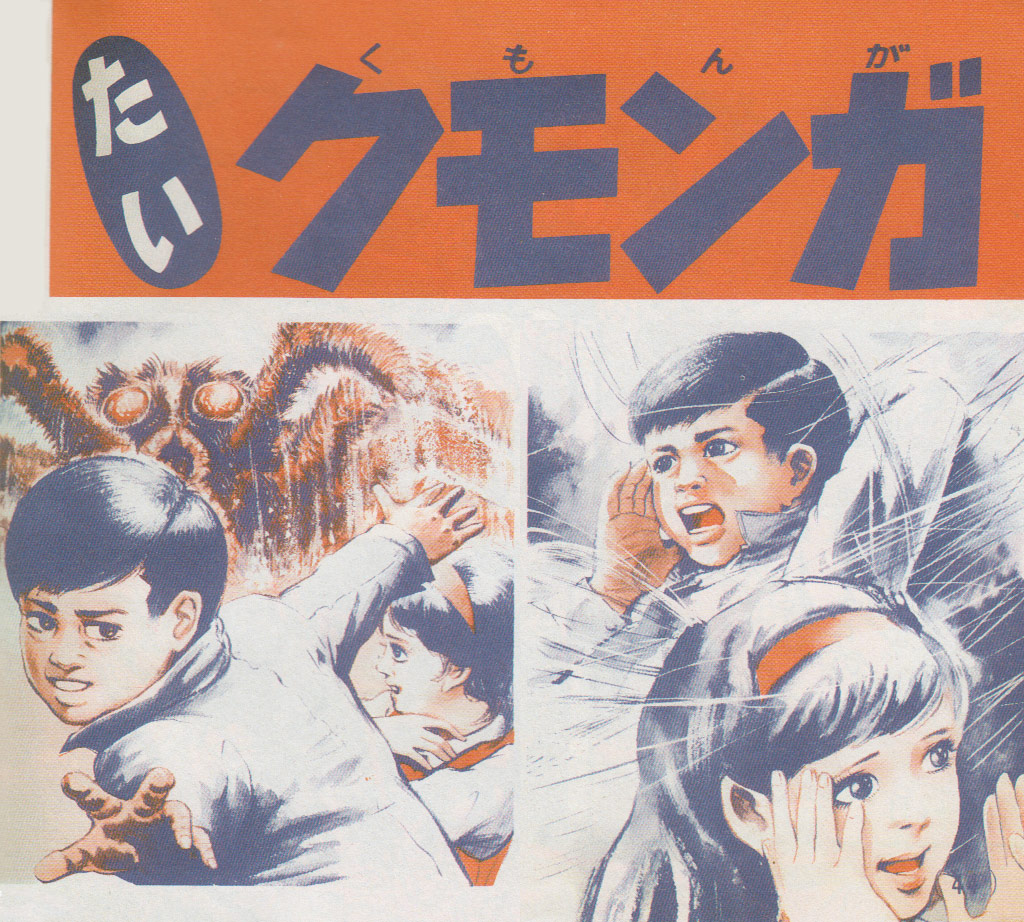 Godzilla came to the rescue. Kumonga, panicked, inundated Godzilla with spider web. Then he tried to stab Godzilla with his poison fangs. Godzilla got mad and cut the webs with his fire breath. Then Godzilla used his Godzilla chop and Godzilla kick in quick succession. Kumonga was laid out flat. 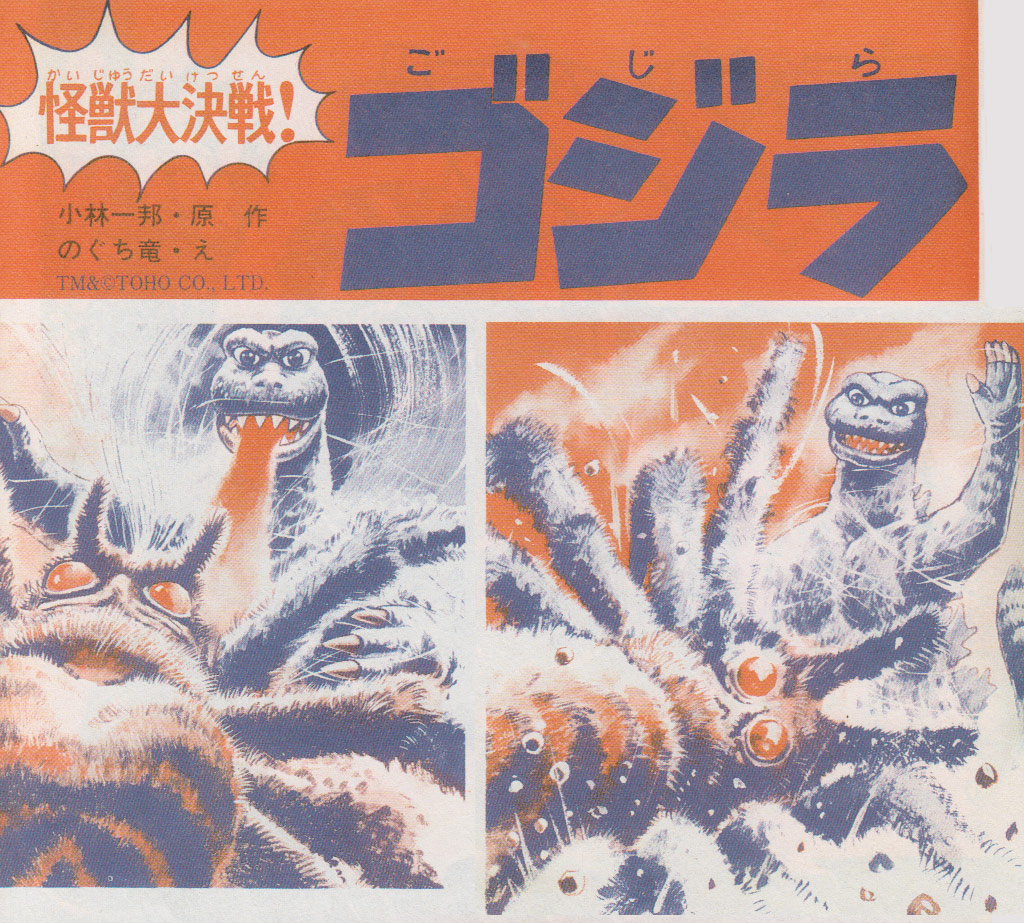 Comments: For me, the most interesting aspect of this story is just that it takes place in Tottori, which is one of my favorite places in Japan. Tottori is a prefecture and city on the main island of Honshu in Japan, and it is most famous for its sand dunes. I visited over the New Year in 2021-2022, in which I got caught in a blizzard, and while the sand dunes are relatively small, I thought they were remarkably beautiful, especially when contrasted against the gorgeous ocean and blustery snow drifts.

They also had a kaiju standee there where you could stick your head through the board so that it would appear you are running away from a monster antlion. I highly recommend visiting the Sand Museum and popping over to Sakaiminato to see yokai manga artist Shigeru Mizuki’s hometown, the statues made of his many creations, and the fantastic museum there covering his life. 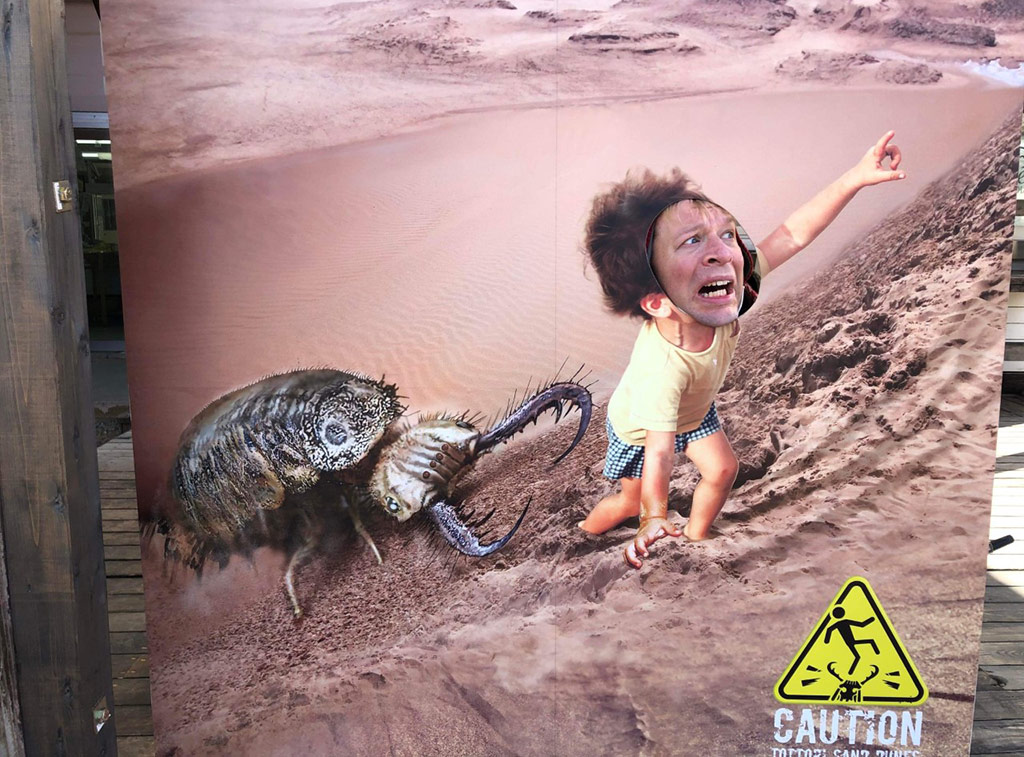 Me fleeing from a giant antlion in Tottori

As for the story itself, obviously it is very slight. The children, Haruhiko-kun and Tomoko-chan, are so underdeveloped that we don’t even know if they are related or if they are just friends. Nor do we know their ages, nor even if they live in Tottori or are just visiting. The battle, too, is over with just the briefest of exchanges, as Godzilla and Kumonga exchange blows quite quickly before the spider keels over.

As per Ryuu Noguchi’s art, Kumonga appears from under the sand much as he burst from the dirt in Son of Godzilla (1967). He also has the same arsenal that he did from that movie—the webbing, the poisonous barb. But whereas in the movie Kumonga spat webbing from his mouth, here he more appropriately squirts the stuff out of his abdomen. Just as in the movie, though, that webbing is weak against fire. However, instead of getting burned to death like he did in the original film appearance, here the big arachnid just gets bludgeoned into submission.

The text is very similar to Kobayashi’s work on the Godzilla series for Tomodachi magazine. Once again we get largely anonymous kids calling Godzilla for help when a monster appears, a brief scuffle, and then the kids thanking Godzilla… and that’s about it.

The art by Ryuu Noguchi is detailed, with the children looking quite realistic and with dynamic poses, and Kumonga appearing hairy and menacing with a gaping maw and fiery red eyes. Godzilla, though, looks disappointingly goofy, and to my eye he appears more akin to an action figure than to any of his movie appearances.

Moving on to “Godzilla vs. Manda,” this story, while also written by Kobayashi, features art by Gojin Ishihara—and it is frankly amazing, and by far the best part of this particular story. Gojin Ishihara is not well-known as a Godzilla-artist, but if you search for his work online, you will find numerous images of his yokai artwork and other strange and detailed images. His style (influenced by Norman Rockwell) is remarkably realistic while retaining a wild hint of the bizarre, and I am in love. The piece here features Godzilla giving a flying kick combined with a flame-breath attack against Manda, and both kaiju have these wide-eyed, crazed expressions that make them look insane. I absolutely adore this image. 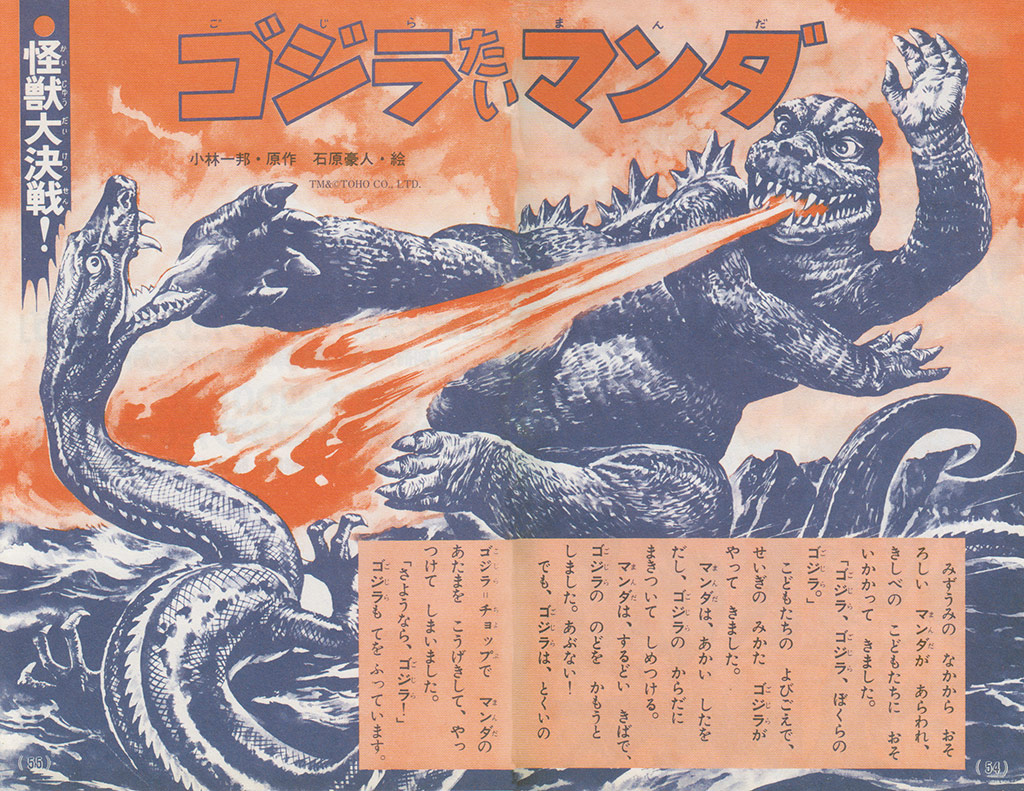 But what about the story?

Out from the lake the scary monster Manda appeared and then attacked the children along the beach.

Responding to their calling voices, the supporter of justice Godzilla arrived. Sticking out his red tongue, Manda wrapped around Godzilla and squeezed him tight. Manda went to bite Godzilla’s neck with his sharp fangs. Dangerous!

But Godzilla, using his forte, the Godzilla chop, attacked Manda and defeated him.

And there we have it, folks. This just feels like total garbage as a story. As with many of Kobayashi’s stories in his Godzilla comic (one of which also featured Manda), the kids are all completely nameless. This time, though, we don’t even get a clear location—just a generic lake. Like in Kobayashi’s comic fight between Godzilla and Manda, the snake basically just wraps around Godzilla. But whereas in the comic we at least get an interesting defeat (Godzilla smashed out all of Manda’s teeth with a rock), here the kaiju king merely clobbers Manda with a “Godzilla chop,” and that’s it. The illustration of Godzilla’s epic flying kick is infinitely more exciting than anything in the limp and colorless story.

Neither of these short stories inspired much interest in me when I read them several years ago, and I just couldn’t muster the energy to write them down and pass them along to the fandom at the time. I still don’t think they are particularly interesting, but I do like the art, particularly that illustration from Gojin Ishihara, and now that I have actually been to Tottori, the Kumonga episode connects more with me on an emotional level. I do remain curious as to whether further episodes exist in the series along with “Godzilla vs. King Ghidorah,” but I am not curious enough to shell out hundreds of dollars for the vintage issues in which those possible episodes may or may not have been published, and so for now at least the answer as to whether further blandly written Godzilla fights exist in the series remains mercifully unsolved. But hey, if someone wants to dig them up, I’d be happy to write up overly detailed summaries and reviews for those, too!