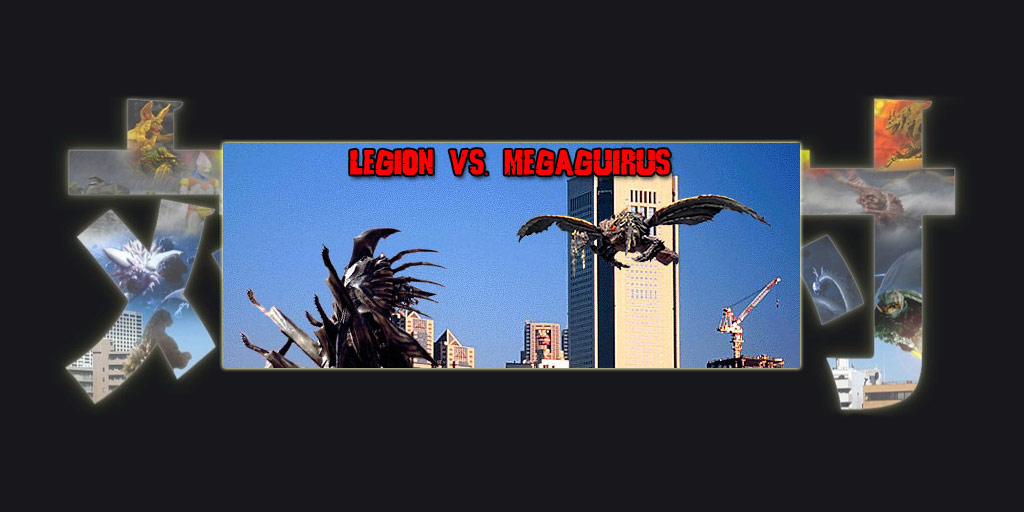 Downtown Tokyo was inundated with water, its streets filled to accommodate a violent and ravenous swarm. All over the city, the Meganula swarm returned from their hunting expeditions to finish charging their queen, Megaguirus, with stolen life force energy. As each of the Meganula returned and dove into the water, they plunged their energy filled stingers into a giant chrysalis, giving up their lives to revive their queen and make the city hers. Slowly, the queen Megaguirus emerged from her chrysalis in the murky depths. The fearsome insect climbed out of the womb of her birth and spread her wings, taking to the sky to survey her new domain.

Meanwhile, on the outskirts of the city, something approached from below the ground, tunneling towards its new nest. Drawn by the enraging hum of neon lights and radio-towers, the creature drew ever closer. As it did, it sensed another presence in through the din of EM radiation. The thing was not making noise like the rest of the nest site, but instead made a different sound, one that signaled a threat. Realizing that there would be a fight, Legion chirped to itself with bloodlust.

Megaguirus’ senses twitched as she felt the presence of an intruder in her domain. Flying above the line of the building, the queen of killers flew around her territory, searching for the intruder.

Legion sensed that the other presence was on the move, probably trying to find her. Not wishing to give up her advantage at the moment, Legion continued to burrow underground further into the territory of the other. Once she felt the enemy about to pass overhead, she thrust her rear-limbs through the ground in the other’s direct path.

Megaguirus banked hard, suddenly confronted with a massive pair of bladed legs rising from the ground directly in her path. The queen’s agility and aerial mobility won out, and she avoided the bladed trap in her path. She flew straight upward, out of the reach of the ivory limbs, and out of danger.

Below the ground, Legion sensed the other dodged her legs. In a fit of pique, she emerged from the ground, shrieking in rage. As she pulled her body from her earthen tomb, she looked up and saw her prey.

Both creatures stared at each other for a moment.

Megaguirus, now able to see her opponent, shrieked out a challenge and charged her wings with sonic energy. Then screeching out again, flew straight at the intruder.

Legion was shaken by the speed of her opponent. Still, she did not back down as her nasal horn opened and energy began to arc between the tips. Taking aim, Legion released a charged particle beam at the other.

Megaguirus, seeing the beam, banked hard as the deadly blue stream of light blasted by. Still rushing forward, the supersonic dragonfly buzzed the intruder and buffeted it with ultrasonic energy.

Legion screamed out in pain as the hypersonic dragonfly flew overhead, and rained down a wave of vibrating screams. Turning, Legion tried to strike the other with her claws, but the prey was too fast and dodged the deadly tip of her legs.

Megaguirus wingovered and dodged the intruder’s limbs, coming back for another pass. Flying past her opponent again, Meganula queen sent out wave after wave of piercing sonic energy. Her opponent released a satisfying screech of pain as she passed over. As the intruder tried to turn around to face her, Megaguirus flew over its back and lashed out with her fore-claws. Yet, when she struck the creature’s body, her claws rebounded off of the intruder’s exoskeleton.

Legion, having recovered from the attack, whipped backwards with her rear legs. Piercing limbs tried to strike at the ravenous insect, while the Meganula queen struggled to break through her shell. Legion sensed the creature had flown backwards, out of her reach.

Legion turned around and opened her horn, charging another particle beam. As she sighted her prey, she unleashed the charged particle blast. Still recovering from the retreat, Megaguirus managed to dodge the beam, but only by a hair’s breadth.

Megaguirus, furious that she couldn’t rend the intruder, decided to try a different tactic. Bringing her stinger to bear, the queen of killers charged up a plasma sphere and, taking aim at the intruder, launched the deadly blast of energy.

Legion, seeing the other charging up an energy attack, extended the limbs on her crown and closed her horn. The other launched the sphere of energy, but instead of trying to dodge it, Legion instead stood completely still. As the energy sphere was about to strike her, Legion sent out a shell of energy from her crown and caught the blast on the tip of her horn. The Meganula queen recoiled in shock as the blast dissipated harmlessly on her foe’s shield. Screeching, Legion opened her horn and fired another charged particle beam. Though Megaguirus was able to evade the lethal blast, she had lost her two rear left legs in the process.

Megaguirus, blinded by rage and pain, charged her wings and flew directly at the intruder. The invader was taken aback as the queen of killers flew overhead and drove the point of her stinger into the side of its crown. Still dispersing hypersonic energy from her wings, Megaguirus flew forward with such force that the part of the extremity was torn from the intruder’s head. The queen was given the satisfaction of hearing the intruder scream out in pain as part of its body was violently wrenched free. The intruder fell to the ground, its eyes dimmed black.

However, overtaken by pure rage, Legion rose up as her eyes burned with a deep crimson. She looked up at the other, who had turned around in midair, and now was hovering out of reach. Legion focused her energy onto the ovaries on her midsection for a moment. Suddenly, her ovaries flashed as internal larvae began to hatch and mature. Then, leaning backwards, she released a black cloud of her brood into the air. Gently humming to them, she told her spawn where the other was, and that they were to tear it limb from limb.

Megaguirus, mesmerized by the flashing on the intruder’s body, suddenly came to her senses as a massive cloud of smaller creatures emerged from the intruder’s body. Realizing that the intruder had just introduced a new element into the conflict, she felt nervous. Still, she would not abandon her territory.

Charging her wings with sonic energy, and powering up an energy ball in her stinger, the queen of killers charged at the swarm. Just as they were about to make contact, she banked hard and whipped her tail down, launching the energy ball. The blast connected with the swarm, burning several hundred to ash. The remaining creatures continued to pursue her. Megaguirus turned suddenly, and flew over the swarm, obliterating some of them with her sonic vibrations.

Legion, furious that her children were being decimated so easily, sent out another call to her spawn. As she did, she opened her horn and fired a charged particle beam into the direct path of the other. The dragonfly banked sharply, avoiding the blast, but instead flew directly into the path of the swarm of her children.

Megaguirus was blinded as the intruder’s swarming spawn attached to her by the dozens. Her flight was slowed as the swarm clawed and bit her repeatedly. Then worse pain flared through her body as she realized that the intruder had shot another one of its beams at her, this time clipping off her right wings. No longer able to fly, the queen of killers began to plummet from the sky.

Legion, seeing her chance, opened up her horn and charged up another beam. As the other fell, she carefully took aim. Then, she unleashed the charged particle blast, striking her prey square in the chest, throwing it backwards. The once fierce dragonfly screamed out in pain as it caught on fire and slammed into one of the buildings, embedding itself in the surface.

Legion sensed that victory was near and charged up one more blast. Then, with great satisfaction, fired the final blast, blowing off the head of her prey and bringing the building down on top of it. Her prey screamed out once more before dying, as the husk of the building and the queen of killers collapsed into a pile of rubble.

Legion then walked into the newly won territory to begin her new nest. 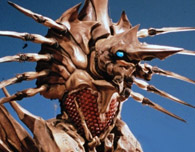