Has it been weeks, or has it been months? The great ape had no idea, but he was tired. The battle against the King of the Monsters had taken a lot out of his ancient soul, but the journey home was an even more perilous nightmare. Kong had no sense of direction, no natural instinct on how to return to his beloved home of Faro. He just kept going, non-stop. He couldn’t stop. Unlike the radioactive abomination he had defeated, he was unable to breath underwater. Like all other apes, he’d drown. And soon, that fact would seemingly become his destiny. Every stroke of his arms and kick of his legs through the ocean felt like a million tons of pressure on his limbs. He needed a break. He also needed to eat…

Then he saw it. A beacon of hope in the distance.

It was alive. A lush, green island. It wasn’t his Faro Island with his beloved natives, but it would have to do for now. At the very least, he could rest, and there would surely have to be some food. Kong forgot about the pain in his limbs and carried on, reaching the coastline and noticing something off immediately.

The island was seemingly void of life. There were no birds. There were no natives. There didn’t even seem to be any small animals. Kong collapsed to his knees, breathing deeply. The giant sighed, rubbing his eyes as his fatigue overtook him. He slumped onto the wet sand and as he drifted off into dreamland, he could almost hear the chanting of his tribe.

But in reality, as he fell asleep, he was hearing a twisted and demented laugh coming from the heart of the green jungle behind him…

The underwater eruption had claimed his brother. The gargantuan was in tremendous pain, but somehow, he had survived. His entire body was in pain, but he remained alive for some reason. Instantly, his primitive mind made the realization that his brother was gone. While they were worlds different and only knew of one another’s existence but for a few days, they had a connection like all brothers do. He would never understand why they were so different and why his brother concerned himself with the smaller creatures, but he’d miss him none the less. Gaira’s head poked above the water and looked back, watching as helicopters buzzed around the twisting pillar of smoke generated by the massive eruption that claimed his brother. They didn’t spot him.

He then turned around, determined to live another day. He’d find a new home to rest and heal for a while…

After days upon days, Gaira’s wounds healed. And then he found land. His head poked above the water, surveying what lay before him. He had come across an island. He could hear the waves crashing against the sandy beaches, but there was no other noise. Despite the lush greenness of the jungles abroad, there were no sounds of humanity or game. Gaira didn’t care. He made his way to the coastline. As he grew closer, his crimson eyes spotted wrecked ships of all kinds. Some appeared to be made of iron, others of wood. He examined them, looking for any signs of life that he could consume. But there was none.

In a fit of rage, the green Gargantua hoisted an old, wooden ship over his head and threw it into the jungles. The boat smashed into numerous trees, snapping them like twigs and turning into a pile of splinters within an expanding cloud of dust. Gaira shouted his frustrations to the island, hoping that his violence would scare some sort of life into movement…

But what he heard was something else…

A bellowing howl came from the depths of the jungle. That howl then became drawn out, its pitch going up and down in the form of laughter. Gaira’s head tilted, scanning the landscape. He couldn’t see anything anywhere. It was all just green.

The Gargantua snarled. There was something here. He knew it. There had to be. The giant grabbed another abandoned boat and lifted it above his head. With a furious scream, he tossed it into the jungle. It had the same result as before, only this time, the noise that followed was deeper and longer. Determined to feed on whatever called this island home, Gaira stepped on land.

Suddenly, the lush jungle began to rise up. A giant stood tall, allowing a torrent of dirt and vegetation to fall from its build. Its skin was coated in strange, mushroom-like growths. Patches of brown fur clung here and there, but it was almost entirely covered in the fungus. Its face was void of features but for an ape-like mouth. From its eyes, mushroom stalks grew. On each of its shoulders, mushrooms budged from hair and flesh, giving the titan a bizarre, three-headed appearance. One of its arms was much larger than the other, its hand fused into a monstrous mushroom. The left arm was still vaguely normal, but covered in the same growths infesting the rest of its shape.

What was once King Kong, the great eighth wonder of the world, had become a monstrous, mushroom-clad abomination.

Gaira’s head tilted, unsure of what to make of the thing that stood hulking before him. His eyes glared and he snarled, bearing razor-sharp fangs. Whatever this thing was, it was alive. And if it was alive, he could eat it.

The Gargantua charged, kicking up a storm of sand in the process. He lunged with ravenous jaws and slashing claws. His fingers tore trenches into the fungus-covered flesh of Kong, drawing a bizarre mixture of blood and fungus fluid. The abomination stepped back as Gaira’s jaws came down on a patch of fur on its throat. The teeth sunk in easily, slurping up the crimson fluid that fell. Blood drunk, Gaira pushed the thing onto its back. It brought up its huge, club-like mushroom hand in response, clobbering the side of the Gargantua’s head. A loud crack echoed across the island from the blow, sending the predator falling onto his back. Gaira scrambled, dragging his forearm across his face and smearing Kong’s blood across it. Swallowing the last of the blood in his mouth, the green one screamed again. He leaped to his feet while the mushroom monstrosity slowly climbed to its feet. It reached out, trying to block the ravenous monster from attacking an exposed area of its flesh again.

Gaira’s hands wrapped around the smaller left arm of the juggernaut and yanked. Kong nearly fell again and whipped its clobbering mushroom at the rabid kaiju. Another crack followed, this time drawing Gaira’s own blood. Still, he refused to relent and continued to pull. He lifted his leg, placing it on Kong’s mushroom-covered mid-section. As he pulled the arm and pushed the mid-section, the fungus that had replaced Kong’s skin on the arm began to break. A mixture of various dark fluids began to flow, splashing across the ground. The abomination snarled its weird sound as its body stumbled back, now minus an arm. Falling onto his rear, Gaira looked down upon the arm he literally tore out of his opponent’s socket.

Gaira brought the limb to his face and sniffed it. It smelled differently than the blood he consumed before. He snorted in disgust and tossed it aside, determining this wasn’t something he was up for eating.

As the ooze continued to fall from Kong’s shoulder, it stepped forward. A strange, laughing-like noise began to erupt from the center of his being. It lifted its clobbering mushroom hand and brought it down, but Gaira lifted his own arms, blocking the wrecking ball-like appendage. Pushing back, the Gargantua overpowered the walking fungus. He shoved it back, slamming it onto its back. Gaira’s chomping jaws came down on the furry neck of the titan while his clenched fists began to pound on all three of the bulbous mushrooms that rested on its shoulders. The mushrooms began to crumble under the blows, spraying strange fluid into the air and onto the Gargantua. Gaira’s mouth acted like a chainsaw, tearing through the softer flesh that remained of Kong’s throat.

The center mushroom that was once Kong’s head began to spit blood from its disgusting mouth. The Gargantua chewed through its windpipe and gnawed through its spine. The mushroom, the smallest of the three on its shoulders, fell away with a spray of crimson. However, its limbs didn’t stop moving.

Lifting his head and roaring his victory, Gaira was taken by surprise as the massive mushroom on its arm came up and crashed into his gut. The gallons of blood and flesh he had just consumed were forced to come up, erupting from his mouth in a disgusting eruption of gory vomit. The green one fell back, heaving from the blow.

Now headless, the fungal-covered Kong began to stand as the demented laughter continued to sound from within it. Gaira rolled onto his side, clutching his mid-section as he coughed up the last of Kong’s consumed blood. He then looked over, watching wide eyes as his headless enemy approached him. It loomed over him, lifting its massive mushroom hand into the sky. Gaira roared, screaming his primal fury and lashing out with his hands wide open. His sharp claws plunged into Kong’s stomach cavity, tearing through the fungus flesh like a hot knife through butter. As fast as his hands thrust in, they came out, pulling handfuls of stomach matter and guts. Dozens of meters worth of intestine began to unravel, spilling onto the ground.

Pushing himself up to half a stance, Gaira didn’t give his opponent another chance to recover. He plunged his left hand into the open stomach, pushing through its internal organs and mushroom growths. His fingers wrapped around the lower spine. He began to climb up to his feet and brought his right hand up, pushing it against Kong’s barrel-shaped chest. Already, the fungus began to rip as he began to push both the spine and chest back, literally folding the abomination’s body.

From within the headless thing, the laughter continued to sound. Its body was nowhere near as strong as what it was before the infestation, but this thing felt no pain. The spinal column snapped in the mid-section and its body collapsed suddenly, causing Gaira to fall on top of it. Its head-like mushrooms now resting between its disgusting ankles, the creature was broken in half.

The sounds of its laughter was maddening to the green Gargantua. He began to run wild on its pinned body, pummeling it with lightning-fast strikes. He tore off the bludgeoning mushroom hand, throwing it into the jungle with the screams of a banshee. With each strike, the creature began to look less like a humanoid entity and more like a smear on the landscape. Gaira was pulverizing the thing, and yet the laughter never ceased. Even over the thunderous booms that came from each blow, the laugh came.

Gaira screamed his fury and lunged down, doing anything to end that laugh…

And he began to feed… 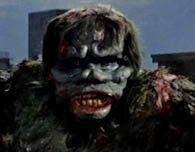