Twas the afternoon before Christmas, when all across the pacific,
A bitter cold took hold, making life for all creatures horrific;

A bitter hunger grasped all on one particular isle,
An island home to the world’s monstrous exiles;

Baragon, Gorosaurus and Varan searched for food to no avail,
The island hearing of their failure in repetitive, unending wails;

Kumonga, Manda and Rodan slept in ravenous yearning,
Biding their time until their prey came returning;

Standing proud yet alone in a valley surrounded by isolated hills,
Anguirus endured the cold and hunger with his immeasurable will;

The two exceptions to gluttony were son and father,
A pair of beasts that only needed to eat if they cared to bother;

Junior and Godzilla truly only needed to consume nuclear power,
But the two knew the island was sinking into chaos with every passing hour;

While Godzilla ignorantly slept atop his fracturing kingdom,
Junior began a trek across the isle to help his dominion;

He could gather food from the darkest depths of the now frigid sea,
It would at least satiate the monsters from committing a murderous spree;

Before the young saurian made it, a trumpet like call echoed from afar,
Not recognizing the screech, Junior found the echo quite bizarre;

Without hesitation, Junior tracked the panicked sound,
Junior walked to the beach where an ally was found;

The dependable ankylosaur, Anguirus, scanned the still waters with precision,
Whatever caused the call would not escape his curious vision;

Both Junior and Anguirus then spun from a thunderous crash,
The dinosaur, Gorosaurus, emerged from the jungle with a titanic smash;

No care or empathy expressed itself from the newly arrived allosaur,
All the green reptilian wished was to consume whatever emitted the roar;

In unison, the trio wandered tirelessly across the deserted beach,
Yet their search discovered no creature that let loose the mysterious screech;

But then, from the sea, a wave of water violently uplifted,
Every monster’s sight in response immediately shifted;

A lumpy orange creature arose with a trumpet like chorus,
A deep sea saurian which had fought Godzilla, the mighty Titanosaurus;

Anguirus, Gorosaurus and Junior readied for a hasty clash,
While Junior echoed a roar of deterrence, Gorosaurus bore his teeth to gnash;

But as blood gradually turned the surrounding salt water red,
The monsters noticed across Titanosaurus an unmistakable dread;

The wounds were many, so grisly it rattled Junior’s core,
He wondered what could have done this to the powerful dinosaur;

The waters swirled behind Titanosaurus, sending him fleeing onto dry land,
Behind him in his wake, an emerald devil strode onto the sand;

Malicious and old, this draconic leviathan showed no remorse,
Dagahra let loose a growl at the trio, inquiring the whereabouts of his fleeing main course;

Gorosaurus nearly turned his head to help, but a foot struck the dirt,
Junior roared at the devil to flee or it would feel unparalleled hurt;

Sensing the hostility, Dagahra let loose a breath of irritation,
He wished not a battle, but his eternal hunger fueled his determination;

The emerald leviathan called forth for the beast’s surrender,
Yet the young king roared in defiance of this new contender;

Eyes narrowed with bloodlust, Dagahra partially enraged,
And with a mighty blast from the dragon’s maw, the battle engaged;

Indigo energy spat from Dagahra’s jaws in every direction,
The draconic being would not stomach this pathetic attempt at protection;

With the devil distracted, Titanosaurus continued to flee,
His form faded into nothing as he flattened dozens of trees;

Anguirus, Junior and Gorosaurus cried in horrendous pain,
Their enemy was powerful, but they could withstand the strain;

Anguirus burst forth first, his maw held wide in rage,
Shocking Dagahra at the durability of this creature from an ancient age;

Teeth pierced flesh and warm blood splattered all over the earth,
Anguirus would remove this draconic evil from his turf;

The ankylosaur would not relent no matter how much Dagahra tried,
A grim smile formed on the leviathan as he prepared to turn the tide;

Energy surrounded his maw and the devil’s wing cones parted,
Dagahra was now ready to end what the ankylosaur foolishly started;

Dagahra smiled as he watched Anguirus plummet and howl in pain,
Surely now the monsters would realize this fight was in vain;

The youngster’s fins flashed a sun-bright cerulean blue,
A fiery beam scorched the sand but then it struck true;

The beach shook with ravenous fury, intentions entirely unmasked,
Gorosaurus charged with such ferocity, to stop him would be a foolhardy task;

A two-pronged kangaroo kick smashed against Dagahra’s head,
The leviathan soared into the ocean, crashing violently onto the sea bed;

Devilish eyes parted in rage from under the dark sea,
No more pride, no more hesitation, he would silence these pathetic enemies;

The open ocean exploded from Dagahra’s immeasurable rage,
His wing canons blasted Barem as the emerald devil began to engage;

Dagahra focused on Gorosaurus’ maw, taking advantage of his jaws parting,
Bubbles began to form, the allosaur was unmistakably frothing;

Green scales struck sand from the dinosaur’s titanic fall,
With only one creature remaining, Dagahra readied to end the brawl;

A flap of his draconic wings allowed Dagahra to fly,
His jaws clasped Junior’s neck causing the creature to utter a cry;

For the draconic monster, he needed no destination,
Gravity would be the factor to end the altercation;

Next to him, in terror, Titanosaurus looked on in fright,
Hearing a haunting bellow which announced it won the fight;

The ground trembled as Dagahra confidently landed nearby,
Titanosaurus spun in horror, the end was unmistakably nigh;

Rustling in the trees attracted both monsters in surprise,
From all directions the inhabitants of Monster Island began to rise;

Long, jagged legs pierced the earth marking Kumonga’s entrance,
To Dagahra irritation, all of the monsters of the island were now in attendance;

From behind the devil, Anguirus stumbled on the field,
His head held low, his burn wounds freshly sealed;

With a weak, yet determined screech Anguirus rallied his brethren,
Dagahra vented a breath of agitation, it seemed he would have to kill all seven;

Indigo energy struck Baragon and floored the dinosaur,
With an ally downed, the others moved to even the score;

Varan charged first with his claws sharp and bare,
A devastating tail swipe smashed the sacred god with little fanfare;

But Dagahra could not react to Rodan in time as it neared,
The fiery Titan’s talons skewered while its volcanic wings seared;

The reptilian pair jumped atop Dagahra, a planning forming fast,
They could not match the devil in power, for the difference was too vast;

But what they lacked in power, Kumonga displayed with intimidation,
A stinger which held a poison that ensured any opponent’s annihilation;

Surrounded by monsters, Dagahra scorched and clawed,
Battering his foe’s until he felt a strange prod;

Within seconds, Dagahra fell stagnant without uttering a single roar,
The monsters fell back while Kumonga continued to impale its stinger more;

A menacing laugh echoed, shocking every creature within sight,
Dagahra arose amused, finding pleasure in the looks of fright;

He was a creature made to consume the vilest toxins and pollution,
Kumonga’s poison was nothing to such a creature of his evolution;

Lifting onto his back legs, Dagahra let loose a mocking screech,
If the monsters wished to experience death, it was a lesson he would happily teach;

The brawl ended before it restarted with a roar which silenced all motion,
To go against the bellow would result in complete destruction;

From the edge of the battlefield, all looked toward the setting sun,
A mighty monstrous king stood over his badly beaten son;

Enraged eyes looked across the jungle toward the emerald titan,
Spines channeled nuclear power and began to eerily brighten;

Dagahra for the first time felt a shiver of terror take hold of his form,
To fight against the King of the Monsters would be like a creature fighting a storm;

The devil let loose his intention to the behemoth which was king,
To consume Titanosaurus, not his allies or offspring;

With overwhelming presence, Godzilla looked to the undersea dinosaur,
Titanosaurus felt death grip him, he would surely be no more;

As Godzilla pondered how the situation would unfold,
His oldest ally, Anguirus, attracted his gaze which was cold;

The ankylosaur looked on with a defiant stare,
Without a sound thought, Godzilla understood how to end the affair;

An order roared out to all the monsters which could listen,
Titanosaurus would go unharmed, it was the king’s final decision;

With a ferocious bellow, the toxic devil ignored his better judgment,
And charged on all fours toward a battle that would be utter torment;

The other monsters readied to assist but a thunderous roar stopped all in their stride,
Godzilla would end this renegade, not out of necessity but pride;

Nuclear behemoth and emerald leviathan crashed with immense force,
Dagahra clamped his jaws on black hide as dense as it was coarse;

Before Godzilla’s blood could fall upon the shaking frozen soil,
Atomic fire burned from his jaws causing Dagahra’s blood to boil;

Dagahra retreated backward but countered with his own volley of fire,
Thunderous toxic beams struck Godzilla until both creatures began to tire;

Their beam war ended and Dagahra jettisoned upward,
Slamming his bulk into Godzilla with such force the King fell backward;

Emerald claws pressed down upon the King’s throat,
Barem blasted onto the behemoth who could not roar but emote;

With an earth-shattering stomp, Godzilla recovered and roared a request,
The emerald leviathan would unleash all its power, a simple test;

Dagahra bellowed in rage and parted his maw in spite,
A mighty indigo ray burst forth to wipe Godzilla out of sight;

The ray flew forth vaporizing all shrubbery it grazed,
Yet the determined King awaited the indigo ray, unfazed;

With his jaws burning crimson and spines flashing the brightest light,
A spray heat ray burst forth to finally remove the draconic blight;

The two rays collided yet the winner proved quite clear,
Dagahra’s indigo beam vanished and within the dragon surged fear;

Godzilla’s fiery ray burned down Dagahra’s gullet, his body filling with flame,
The ravenous appetite of Dagahra replaced with anguish and pain;

A great inferno swallowed Dagahra’s rotting corpse in a flash,
His flesh and bone gradually reduced to nothing but fine ash;

The monsters roared in celebration of their hard-fought victories,
Allowing the moment to overshadow their wide-ranging injuries;

But soon the monsters of the island discovered one enraging truth,
Titanosaurus, the cause of the brawl, was now aloof;

No traceable sign remained of the undersea dinosaur,
Causing the monsters of the island to mock him as a coward in roar;

Hunger silenced their calls and soon the monsters angrily returned to their dens,
The frigid air and snow flurries of the night acting as their unwanted friends;

With morning the chilled breeze remained, yet something filled the air,
A putrid, horrendous smell that shockingly began to ensnare;

The creatures of the island gradually made their way to the eastern shore,
Where the sand was stained crimson in a display of true horror;

Rotting corpses of whales and squids covered the beach from end to end,
To the monsters of the island the sight was nearly too much to comprehend;

Watching the ravenous feast in the far-off tide,
Titanosaurus looked with a lingering sense of pride;

The gift had been tedious but it seemed to take,
Soon nothing would remain from the monsters’ ravenous wake;

Rising on a nearby mountain, Titanosaurus spotted a new creature,
It’s identity apparent from the dorsal spines, its most defining feature;

Godzilla’s presence loomed over all within his domain,
Striking fear into the very core of the undersea creature’s brain;

The nuclear leviathan’s head turned with his glare aimed out toward the sea,
His stare apparent sparking Titanosaurus to flee;

But Titanosaurus heard him roar as he dove out of sight,
He could return one day, with or without a fight. 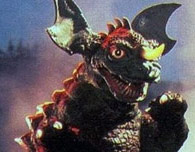