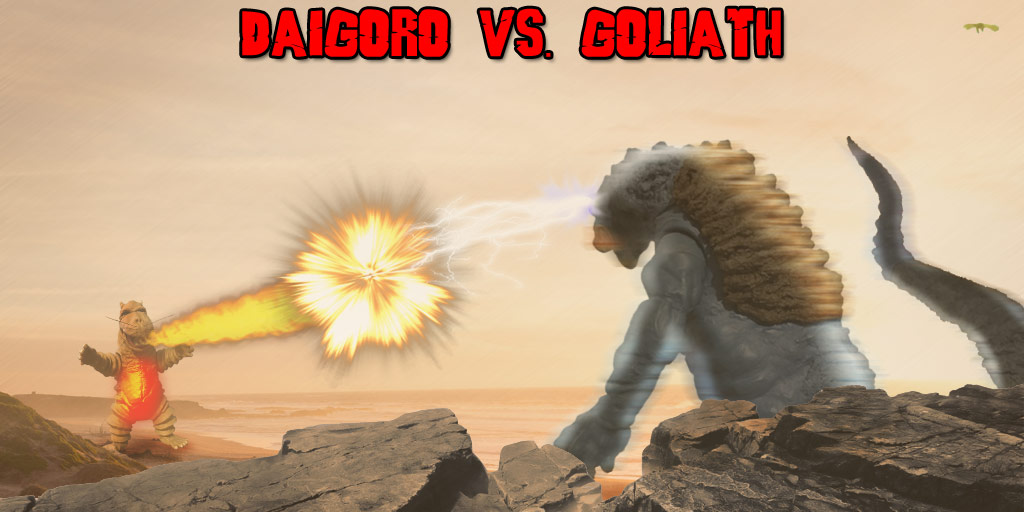 Weeks had passed since the battle with King Ghidorah, the world blissfully unaware of the fact that it had been saved from the unknown threat. The unlikely duo that drove away the golden dragon had gone their own separate ways. They had unfinished business, after all.

Goroshima Island; where it all began. The sun warmed the island as cool waves crashed against its shore. A familiar cream colored beast marched along the shore. Daigoro, the plush juvenile monster, stopped and stretched, feeling the warm sun rays on his soft skin.

Daigoro listened to the waves as they crashed against the rocks. But the serenity was brought to an abrupt halt as he heard powerful footsteps slowly getting louder. The pudgy monster turned to face the source, not surprised by who was making them. In the distance, a bulky blue behemoth lumbered over the hills and onto the beach, growling in anticipation.

Goliath, the blue star monster flexed his large hands. He had been waiting for this moment; no unnecessary distractions, or unwanted third wheels, just him and Daigoro, ready to settle the score once and for all.

Daigoro trudged up to Goliath, nodding his head. He knew how much this meant to the blue giant and he didn’t want to disappoint. The bumpy hippo monster stretched out his paw for a friendly handshake, but Goliath snarled and swatted it away. A bit disheartened, Daigoro respected Goliath’s choice; the two didn’t waste another moment. Backing up, they stared each other down, waiting for the other to strike.

Goliath, unable to contain himself, leapt forward, arms stretched out, wanting to pummel that irritating face of Daigoro’s. Daigoro easily sidestepped and rammed his left fist into Goliath’s gut, knocking the air out of the blue brute. The big blue space monster growled and elbowed Daigoro in the temple, staggering the plushy monster hero.

The blue space monster swiftly turned and clubbed Daigoro’s head with his large fists, easily knocking over the younger fighter. Daigoro grunted and picked himself up, just in time to dodge two blue fists slamming into the sand, Goliath roared and turned again, swiping the beach with his tail, sand shooting into the air.

Daigoro covered his eyes to try and block out the sand, which only left him open for another blue fist to strike his arms. The young hippo monster skid backward, putting down his arms, he charged at the blue rhino-like beast, jumping forward with his legs and landing a drop kick to Goliath’s head, toppling the horned monster.

Seizing the opening, Daigoro leapt onto Goliath’s chest and began battering his face with clenched fists. Goliath roared in pain as each fist collided with his face, every strike felt like being pelted with boulders. Unknown to Daigoro, a blue tail smacked into his bumpy back, knocking him forward. Goliath immediately bit into Daigoro’s squishy stomach, forcing the hippo hero to squeal in pain. Feeling more pressure being applied by the second, Daigoro made his right hand look like scissors and poked Goliath in the eyes, receiving a howl of pain. The pained Goliath released his bite.

Daigoro hopped off his blue foe, checking his stomach. Just a few teeth imprints, but the pain still radiated. Goliath snarled as he rolled onto his stomach and got up. His nasal horn crackled with energy as he turned to face Daigoro. The hippo monster knew what was coming.

A bolt of lightning fired from the yellow nasal horn, striking the ground in front of Daigoro, forcing sand to shoot into the sky. Daigoro yelped in pain as another lightning bolt struck his toes, the plush hippo monster grunted and began rubbing his stomach, causing it to glow red.

Goliath snarled, grabbing a seaside rock and hurling it at Daigoro. Unfazed, Daigoro closed his eyes and threw forth his right fist, causing the rock to shatter upon impact. Pieces of debris flew everywhere. Goliath grunted in shock but was instantly reminded of the fires dancing in Daigoro’s mouth as flames spewed forth. Goliath raised his chunky arms and tried to withstand the heat.

The sand in the surrounding area slowly turned to glass as the flames raged on. Goliath roared as he was pushed back, his skin started to peel and blister. Daigoro stopped his assault and charged up to Goliath. The blue beast tried to swat Daigoro, but the smaller cream colored juvenile easily evaded each lazy swing. Daigoro rammed his shoulder into Goliath’s chest forcing the blue brute to stagger back. Daigoro reached for Goliath’s ankles and forcefully pulled on them, causing the star monster to shriek in surprise as his back slammed against the warm beach.

Daigoro smirked and clutched Goliath’s tail; he slowly spun in place, dragging the blue behemoth around and slowly raised him up before finally letting go. Goliath groaned as he soared through the air, slamming into a rocky cliffside. The star monster spat out blood-soaked sand before propping himself up.

Daigoro hopped up and down before jumping forward again, his fists outstretched. But before he could strike, he was hit head on with a lightning bolt, immediately dropping him to the ground. The chubby juvenile squirmed as he tried to fight back, clutching the sand as he struggled, but Goliath was already upon him. Stopping the lightning bolt, Goliath jumped into the air, laying himself out and letting gravity do the deed. The plush juvenile turned onto his back, eyes widening as he saw Goliath drop back down. The stellar monster body slammed Daigoro, easily knocking the wind out of him.

Before Daigoro could get enough air, two blue meaty hands grasped his neck and began pumping him with electricity. Daigoro silently suffered as his body ached and twitched, foam spilled from his mouth as he choked on his spit.

Goliath relished the sight of his opponent’s agony, unaware of the red glow beneath him.

Sure enough, Goliath felt his hand get sweaty, making it easier for Daigoro to push them away. Goliath was surprised by the sudden resistance, but immediately understood what was happening as flames erupted from Daigoro’s maw. Boiling spit and searing foam flying everywhere forced Goliath off the tubby child monster, fumbling backward but still maintained some footing.

Goliath stared in awe as Daigoro coughed and wheezed, struggling to stand. His neck was raw, tears ran down his face, but he put up his fists and groggily charged the stellar monster. Goliath roared and charged as well. Goliath spun around and tried to whip Daigoro, but the heroic monster grabbed yanked it again, but Goliath was ready. His horned crackled with energy before his body flashed a bright blue. Daigoro immediately let go as he felt electricity surge through him again. He dropped to one knee, but was determined to not fall.

Goliath slowly turned and chuckled. His victory was almost at hand. However, Daigoro wasn’t out of the count yet. With all his remaining strength, Daigoro leapt forward again. Goliath raised his right arm in response to block the punch, but Daigoro wasn’t going for the punch. The whiskered juvenile put his power into one finger and swiped down on Goliath’s arm, the blue stellar monster suddenly howled in pain as he felt his bone crack, staggering backward as he tried to regain his composure.

Goliath stared daggers into Daigoro. What kept him going? Surely, any other monster would crumble from his awesome power. Goliath grunted; he felt something different, a smidge of respect for his opponent. The blue brute shook his head and prepared his electrical horn again, ready to give Daigoro a swift end. But Daigoro clenched his fists as the air warped around him, flames escaping his mouth.

Goliath snarled, he wasn’t about to make that same mistake twice. Goliath fired his lightning bolt, forcing the hippo monster to preemptively fire his heat ray. The two beams collided, struggling for dominance. Goliath poured every ounce of energy he could muster into the attack. Daigoro, although his legs were wobbly, remembered the cheers of the children. They gave him the confidence to defeat Goliath before, and he didn’t want to let them down this time. He remembered his father Mr. Saito, every other person who believed in him, and even his mother, who he vaguely remembered.

The young monster squeezed every last ounce of fire power he had; Goliath poured every last drop of energy into his lightning bolt. Before either knew it, a flash of white light engulfed them both. As the light faded, two forms were left standing. Daigoro, the orphan turned hero; Goliath, the space monster, blinded by revenge. Both stood tall, before Goliath tipped over. His body met with the beaches warm embrace. Daigoro fell to one knee. It took minutes, though it felt like hours, before Daigoro tried to stand using a nearby rock as a crutch.

Daigoro stood tall, raising his fist in air, like the wrestlers on the image box Mr. Saito showed him once. Slowly regaining his bearings, he knew he had won. He had made everyone proud, even if they weren’t here to see it.

The plush juvenile was exhausted, hungry, and hurting. He looked over to Goliath, who was breathing heavily, barely conscious. Daigoro limped toward the blue brute, who groggily looked at him, before looking away. Daigoro cracked a smile and stretched out his hand again. Goliath stared back, and strained to lift his left arm, holding onto Daigoro’s hand. Daigoro grunted as Goliath fumbled to stand, but he managed. Once standing, the two stared each other down. Then Goliath turned and lumbered away, wanting to rest.

He admitted defeat. He knew Daigoro could finish him off if he truly desired. The star monster hung his head in shame as he left the beach. The space monster was about to march over the hills, before feeling a pair of arms wrapped around him, stunned, the blue brute gazed down, seeing Daigoro give him a hug. He didn’t quite understand it, but he knew it was a sign of good sportsmanship.

Goliath grunted and shooed the child away, barking at the cream colored hippo monster, not to get too chummy just because he bested him in battle. Daigoro nodded his head. He knew Goliath wouldn’t change in a day, but it was a start. Their rivalry was still ongoing, and they would continue to better themselves.

As Goliath disappeared over the hills, Daigoro went back to his old resting spot, sitting down and appreciating the ocean view. Him and Goliath would clash again one day, but hopefully not for a long while. For now they would rest and enjoy the well earned peace and quiet.

As Daigoro, prepared to lay back and relax, his stomach growled something fierce. That was definitely something he couldn’t defeat. Oh well, he could go for lunch right about now anyways. 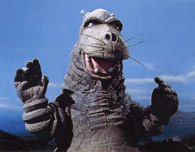