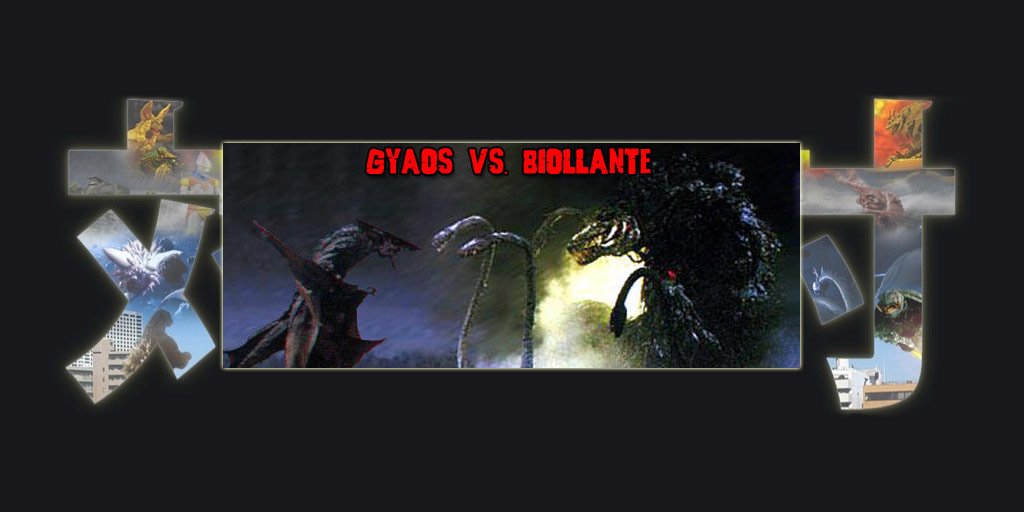 Dabbles of sunlight bathed the wondrous forest. Acres of trees towered over the soil, using photosynthesis to absorb the energies of the Sun. Rivers of water flowed freely between their roots. A strange odor permeated the damp landscape. It reeked of decay, sapping the rainforests of its natural smell. Recently, an unwanted organism had arrived during the darkest hours of the night. Its hunger urged it to consume the local creatures. Nothing was spared from its insatiable appetite. But its reign of terror was postponed by the rising Sun. As the darkness retreated to the far corners of the globe, the ‘Shadow of Evil’ took refuge. Flora concealed its nocturnal visage. Blood red scales laced its filthy body. Leathery wings stretched out of its sides. Its sharp talons were submerged in water. Not even a school of hungry piranha would dare nibble at it. Its demented cranium was shaped like the tip of an arrow. Serrated teeth lurked within its closed maw.

Until sunset, the Gyaos would slumber.

Unbeknownst to the vulture, the rainforest it had invaded harbored a monstrous entity. It had been years since its spores seeded this tropical paradise. Buried beneath the foliage, an orange radiance pulsated from a round object. To the untrained eye, the object was but a mere brain. In the early days of its creation, Godzilla’s cells were combined with that of a plant. A scientist, driven by the death of his daughter, sought to create an immortal organism. Only, he did not expect his daughter’s spirit to inhabit its core. After a vicious battle with Godzilla, the creature took refuge beyond the reach of the sky. It observed the planet from its spatial habitat, questioning its artificial existence. After a decade it left the stratosphere, seeking eternal rest in a suitable environment. And yet, the human spirit never abandoned it.

But now, the arrival of the Gyaos stirred Biollante from her slumber.

A vibration unsettled the ground. The flowing water recoiled from the subterranean activity. Trees swayed back and forth, sustained only by their strong roots. The tremors awakened the Gyaos from its nefarious dream. Its insipid mind was unable to comprehend the situation. As its eyelids pulled up to reveal its crimson eyes, the predator stared at the trembling ground. Its delayed senses alerted it of the imminent danger. Determined to avoid a catastrophe, the Gyaos vigorously flapped its leathery wings. Strong gusts of wind flattened the nearby trees, propelling the putrid creature into the air. But a vine shot out of the ground and entangled the Gyaos’ ankle. Not even the shadow of evil could break free from this tight grip.

The shrieking Gyaos expressed its aggravation. Its wings continued to flap, granting it the stability it needed to remain aloft. Particles of light and sonic vibrations entered the foul beast’s exposed mouth. In the bowels of its gruesome throat, the Gyaos mixed the foreign elements together, and unleashed a sonic beam. It instantly sliced the vine apart and carved a deep hole into the ground. The slivered vine slithered back beneath the soil. Gyaos hovered above the forest, fearing its safety. Suddenly, a large entity sprung from the soil. Mounds of dirt and trees tumbled off its rigid shape. Gallons of water dribbled off its soggy flesh. The winged beast’s dark heart flustered as it observed its new adversary.

Biollante’s mammoth jaws widened, exerting a chaotic cry. Layers of emerald flesh coated the behemoth. Green residue leaked from her elongated snout. Her roots, barely distinguishable beneath her massive figure, remained buried in the soil. Long, muscular tentacles lingered out of her upper body. As the tentacles swayed back and forth, several underwent a transformation. Frightening mandibles bulged out of the tentacle tip. Gyaos watched on as a chorus of shrieks emanated from the beastly tentacles. Infused to Biollante’s abdomen was her core, the source of the mutant’s life force crackling with energy. The energy coursed through Biollante’s boiling veins, preparing her for battle. Widening her jaws, she emitted a low, ominous howl. Gyaos glanced into her mouth, spotting hundreds of serrated teeth huddled on her upper and lower jaws. An emerald residue leaked from her maw, melting the trees below. It touched a small body of water, vaporizing it in a gout of steam.

Biollante peered at the hovering Gyaos. The human spirit within connected with its dark conscious, deciphering its shrouded past. Eons ago, an advanced civilization sought to create the perfect organism. Their scientists succeeded in creating an organism that had only one chromosome. But their perfect creation became the ideal killing machine. It did not need a mate to reproduce others like itself. In the duration of only a few months, an ancient civilization – whose technological advancements dwarfed that of its present day descendants – was erased over night. A defender was created for the sole purpose of eradicating the Gyaos and other vile creatures like it, but its existence came too late. Over the years, the Gyaos’ cannibalistic tendencies wrought the near extinction of their species. But the declining mana of the Earth eventually resurrected this blight of creation.

Thorny tendrils slithered out of the ground, instructed to seize the Gyaos. The artificial predator perceived Biollante’s actions and utilized its superior maneuverability. Like an insect avoiding a fly swatter, it outmaneuvered the thorny tendrils and retaliated. A sonic beam was projected from Gyaos’ mouth, quickly shredding the tentacles. As the burning blood of the tendrils scalded the forest, Gyaos moved to strike their controller. Biollante howled in contempt, forbidding her foe’s advance. But the shadow of evil defied the mutated hybrid by sending its sonic beam straight into her core. Biollante wailed in pain as the sonic cutter punctured her body, shredding the organ that kept her alive. Gyaos curved its head up, moving its sonic beam up its foe’s form. A deep trail was sliced into the plant-like flesh, which peeled back before the horrid attack. Green blood seeped out of Biollante’s wounds, but her cellular makeup instantly regenerated the damage.

Gyaos screeched in frustration. The failure of its attack left it at a disadvantage. It flapped its wings and swiftly flew above the green earth, moving away from Biollante’s thrall. But she yearned for the living blight’s oblivion. Upon her command, dozens of tendrils ruptured the moist soil. They scourged the air, searching for the Gyaos. The artificial predator flew hundreds of feet above the trees, yet the tendrils reached its airspace. The limbs harpooned their sharp edges into their target’s flesh, easily puncturing the meaty exterior and forcing its rotten blood to escape its festering veins. But the Gyaos was persistent in escaping. It fought the pain that wracked it so and broke free of the tendril’s clutches, sacrificing chunks of its flesh in the process. Gyaos swerved around, unleashing its vile sonic beam. But the fiend’s tool of destruction slashed only trees. The tendrils had returned to the depths of the earth. Anger clouded the Gyaos’ demented mind, urging it to ignore the branches of its foe and attack her base.

Biollante’s inhuman eyes predicted her foe’s intentions. Dozens of tendrils were stationed beneath every inch of a five hundred meter radius. Her tentacles, each possessing a mandible of their own, cautiously hid among the foliage. Biollante patiently waited for her disgusting foe. Her wait was not long. Gyaos swooped down from the sky and pulled up, granting it the chance to clamp its talons down upon Biollante’s monstrous jaws. The artificial fiend’s talons clung to the genetic hybrid’s outer tusks, avoiding her mouth. Biollante tried to shake the Gyaos loose by wobbling her head, but the foul reptile could not be deterred. As a result, the bionic superbeast summoned her tentacles. They slashed the air, hurtling their mandibles into the shadow of evil’s flesh. Her spear like tendrils crucified the Gyaos’ backside, rupturing its layers of flesh and muscle with the utmost ease. Yet the penetration rent Biollante’s own tendrils asunder, causing their acidic blood to blemish the artificial predator’s innards.

Painful screeches departed the Gyaos’ wracked frame. As the tentacles bit the Gyaos harder, acid spewed out of their gruesome mouths, dissolving its putrid flesh. Smoke sizzled out of the fiend’s wounded pores, polluting the air. Unnerved by the horrible smell, Biollante lurched forward, and rammed her attacker into the ground. The combined efforts of gravity and the bionic superbeast’s colossal figure knocked the wind out of the Gyaos’ lungs. Its sternum had been compromised by her bulk, yet, the snarling creature still writhed with life.

Gyaos desperately unleashed its sonic beam, immediately chopping through the attacking vines. Seeking recuperation, the tentacles returned to the depths of the earth. Biollante widened her maw, pledging her desire to swallow her foe whole. But the the shadow of evil carefully gripped her tusks, enabling it to lift its body up and avoid a horrible fate. Without her vines to protect her, Biollante was forced to lift her massive head off the ground, the feral beast still clinging on. The genetic hybrid’s echoing roar informed Gyaos that the massive beast was attempting the same strategy as before.

Biollante prepared to dive her face into the ground, hoping to rid herself of the disgusting hitchhiker. But the Gyaos quickly shredded her head with its sonic beams. Biollante’s flesh was thick enough to withstand conventional weaponry, yet the shadow of evil’s primary weapon pierced it as if it were tissue paper. As a testament to the terrifying attack, gouts of blood gurgled out of Biollante’s wounded head. Her howling cries made even the trees shudder. In retaliation, a lone tendril bolted at the Gyaos’ backside, and emerged out of its chest. Biollante’s single tendril had pierced the living blight’s body!

Gyaos’ sonic beams disappeared. Its pain prevented it from shrieking in distress. Biollante took advantage of her foe’s state of shock by having her tendril tug her foe off of her face. A swarm of thorny vines emerged from the earth, ensnaring the wounded Gyaos. It tried fighting their crushing embrace, but it could not. The foul reptile’s eyes literally bulged out of their sockets, oozing with pus. Realizing her foe could not escape, emerald energies pulsated out of her core, focusing on Biollante’s throat. She doused the immobilized Gyaos with a plume of green acid. The artificial predator squirmed beneath its scalding exterior, incapable of preventing the inevitable. The acid instantaneously devoured Gyaos’ outer flesh. It took only several seconds for its muscles to fade away in a pool of corrosion.

The skeleton was all that remained.

Victorious, Biollante unraveled her vines, leaving the skeletal carcass to bake in the sun. Sensing that there were other evil creatures in the world, she dissolved into billions of glowing spores. As the spores ascended to the heavens, the spiritual essence of a woman’s face faintly materialized, signifying her immortal quest for peace and the sanctity of the planet. 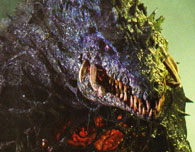