The benevolent deity of Infant Island, Mothra, lightly lifted her wings, then let them settle back to the ground. She rested upon her massive temple and listened to the songs of the Cosmos. It wasn’t often that the mighty lepidopteran could slumber peacefully without interruption. Many times her attempts at rest had been interrupted by a call to battle.

The serene silence was suddenly pierced by the Cosmos screaming in terror. Mothra’s eyes lit up as she looked down upon her priestesses and saw that they were being menaced by a tentacle of greenish-black sludge. Mothra chirped angrily and fired a blast from her antennae, striking the tentacle and vaporizing a large portion of it. Suddenly, a shrill scream, not unlike a telephone ring, was heard directly outside the cave. The cave began to shake, and Mothra watched as the infuriated Hedorah came smashing through the wall. She chirped at the intruder, who raised its arms in anger and let out a reverberating shriek of its own. Flapping her mighty wings, Mothra took to the air and smashed face-first into Hedorah, knocking the Smog Monster over backwards and out of the cave as the insect readied herself to attack.

Hedorah was back on its feet faster than expected, and fired a jagged bolt of energy from its eye. Mothra reacted quickly, and was able to avoid the blast. She returned in kind, unleashing twin golden beams from her antennae. The beams hit their target, punching right through the sludge and blasting the ground behind it. Hedorah gargled in pain and took a step forward at the same time Mothra began to advance as well. The alien began to raise its arms to attack, but Mothra flapped her wings. The powerful gusts of wind were too much for Hedorah and it was quickly forced back. More and more the goddess beat her wings, trying to put as much distance between the invader and her cave as possible. Just at the right time, Mothra fired her energy beams again, this time at Hedorah’s feet. The blast sent the beast tumbling to the ground and careening down a hill.

The Smog Monster rolled down the hill for what seemed like forever until it eventually hit the ground with an earth-shaking crash, landing on the beach. As Hedorah began to regain its wits and rise to its feet, Mothra hovered down from the hilltop, flapping her wings wildly. She began striking the invader with her mighty wings, stunning the slimy beast as she rained blow after blow upon its head. Suddenly, Hedorah reared its head back and fired an energy bolt from its eye. The bolt ripped through Mothra’s wing like paper, blowing a hole through the orange circle upon it. She cried out in pain and swerved away from Hedorah, momentarily retreating as her wing smoked. The pollution spreader let out another echoing sound that was eerily like laughter.

Mothra turned to face Hedorah again, and this time flew directly at her foe. Before it could make a move, she fired her golden beams again, but this time fired them rapidly. They blasted through Hedorah’s chest, legs, and face as the mighty moth neared her foe. Her last beam punctured Hedorah’s left eye, effectively blinding the Smog Monster on that side. The alien stumbled from the blow and screamed in pain. With Hedorah now turned away from her, Mothra moved in even closer and began shedding her electric scales. The living ooze turned around just in time to be doused in a large cloud of scales, and started waving its arms around wildly in an attempt to strike its foe. Mothra fluttered her wings, gaining more altitude and evading Hedorah’s reach. More and more electricity enveloped the alien’s body as the divine moth continued her attack. Hedorah’s eye flashed as it fired another energy bolt to strike its opponent, but it was not prepared to have its bolt reflected all around it by the energy vortex. The crimson bolt hit its wielder in the torso, knocking the alien flat onto its back. Hedorah shrieked in fear; it could already feel its body starting to dry up…

In a desperate attempt at freedom, Hedorah fired a blob of acidic sludge from its chest. The corrosive sphere struck Mothra in the underside and immediately ceased her electric scale attack. She cried out in pain as she felt the slime dissolve her fur and begin to eat away at her flesh. As Mothra struggled to dislodge the sludge, Hedorah returned to its feet and fired another bolt of lightning from its eye. This blast struck its foe right in the chest and sent her flying back. Hedorah fired again and held the bolt, sending Mothra careening backwards until she smashed into a mountain and fell to the ground, landing on her back.

As the goddess flapped her wings, trying to get back to the air, Hedorah advanced. Just as it seemed that she would return to the sky, the toxic fiend stepped on her wings, instantly grounding her. It began stomping on her wings and thorax, each blow drawing a pained shriek from the colorful deity. The slimy demon suddenly stopped, and Mothra thought that perhaps it had decided to give up.

Unfortunately, that was not the case, a glowing red bump began to emerge from Hedorah’s head. Mothra suddenly felt very cold and wet. The cretin had begun pouring black sludge onto its victim, covering most of Mothra’s body with the vile liquid. The insect tried to escape, but it was in vain. Hedorah was still atop her wings, and each time she was able to move them, they merely splashed in the toxic goo.

Finally, Mothra had had enough. Her eyes flashed a bright blue, and golden lightning bolts fired forth from the undersides of her wings, electrifying the Smog Monster and sending it crashing to the ground. With a mighty flap, Mothra managed to right herself and take to the air. She may have been weak and stained with Hedorah’s slime, but she wasn’t out yet. She was determined to drive this vile beast from her home. With an angry cry, she flapped her wings and dove in to attack her foe.

Unfortunately, the attack was in vain, as Hedorah responded with another burst of corrosive sludge from its chest. The ball hit Mothra directly in the face, completely covering her right eye. She immediately turned straight up into the air and flew erratically as she felt the sludge doing its job. Her small legs unable to reach her face, she could do nothing as the slime ate away at her eye. Hedorah watched its foe fly around the beach, spinning and shaking in a vain attempt to dislodge the sludge.

Suddenly, Mothra stopped moving, save for the flapping of her wings. Burned, battered, blinded, and covered in slime, the giant moth was beaten, and she knew it. Any more punishment and she would surely perish. Rearing her head back, she called out to the cave. A golden sparkle of light emerged from the cavern, flew past Hedorah, and attached itself to one of Mothra’s lower feelers. She would flee with the Cosmos. Slowly turning away, Mothra flapped her wings and began to leave Infant Island. She would return to fight another day.

Hedorah would not allow this. Raising its arms, Hedorah fired another bolt of energy from its eye. The beam reached out over the ocean and struck Mothra in the thorax, engulfing the insect in a burst of fire. Spewing flame and smoke, Mothra plummeted from the sky and crashed into the ocean, sending tidal waves in every direction.

Hedorah watched its prey strike the sea, and hunched over. In bright pink flashes, the Smog Monster transformed into its swimming stage and stepped into the ocean. Now it would finish her… 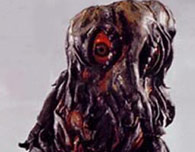