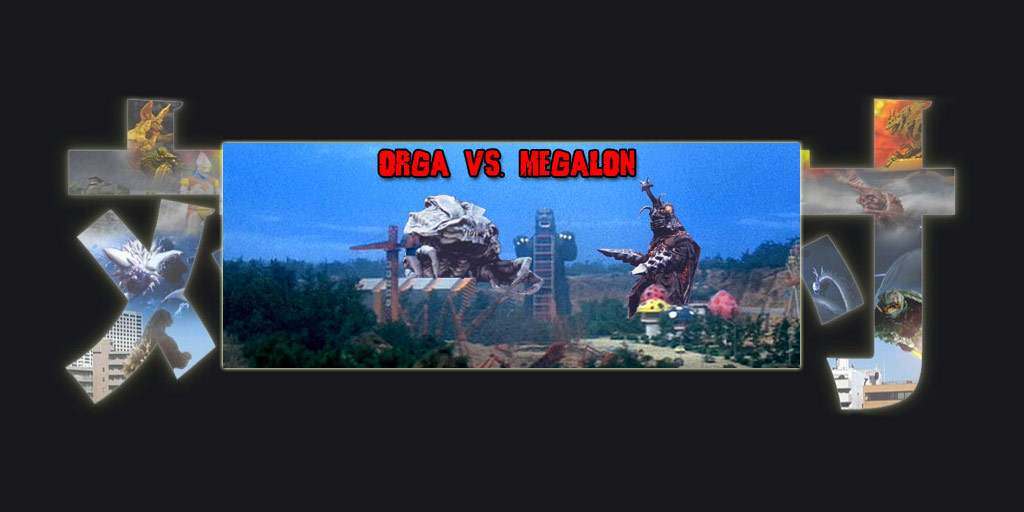 The ground shook around the World’s Children Land from an unseen force. From beneath the ground, something was setting the area a stir; cracks splintered the terrain as nearby factories rocked back and forth. A pair of drills burst from beneath the ground and glistened in the morning sun. A long, triangular horn slit through the soil and reached out into the air. As if pulled out by gravity itself, the massive creature flew out of the earth.

Its bulbous eyes scanned the area as it descended to the ground. The earth shook upon contact, while the massive beast examined its surroundings. Antennas that jolted from the creature’s forehead twiddled. Its sharp mandibles, poised in a horizontal position, closed uncontrollably.

Resembling a gigantic humanoid beetle, the beast was none other than Megalon. An ancient god from Seatopia’s past, Megalon was its guardian and had been sent to oust mankind from its power over the world. The mega-sized beetle clattered his drill palms together, hearing its echo pervade across the terrain.

Feeling as if there would be no hostility within the area towards Seatopia, Megalon looked up and saw that the sky was tainted with white clouds. Wings folded out from beneath the yellow carapace that covered the insectoid’s back and began to flap hundreds of times per second. Churning strong gusts of wind at the ground, the Seatopian deity ascended towards the sky.

In the corner of his compound eyes, the archaic insect could see a large tower resembling a gigantic dinosaur that seemed to rest its arms over an elevator shaft. In a display of dominance, electrical currents set the triangular horn ablaze. With an incredible showcase of power, a rippling beam of pure energy arced through the air and cleaved the tower’s head. The inorganic head of the tower was incinerated and burst in a fiery ball of fire.

A loud chuckle escaped Megalon’s throat, turning to fly towards the nearest city and leave it a smoldering crater of death. But then, Megalon suddenly caught the scent of another nearby. In fact, even while aloft, he could literally feel the ground shake. Nervously, Megalon peered down and was amazed to see a gigantic beast, covered with gray flesh, trudge across the ground. With one swipe of its massive claw, the nearest factory was sliced completely in half.

Knowing this beast could pose a threat to Seatopia, Megalon released a battle cry and descended to meet this monster. Yet he remained unaware that this creature was not from this world, and was known only as Orga.

Orga’s extraterrestrial eyes absorbed the bright fabrics of light that gleamed from the sun itself, making it look as if they were glowing. Orga’s hulking frame looked as if it were slouching forward, with a large lump on its back. Its shoulders were massive, and in the left shoulder was a massive hole. Orga’s teeth hung out of its jaws, visible to any who were unlucky enough to witness its gruesome appearance. Orga possessed long, dagger-like claws that had already shown to be capable of ripping structures to pieces.

Megalon screeched across the sky, aiming his triangular horn at the alien beast. Torrents of electrical power rippled from his horn and daubed Orga in its might. The hunchback alien howled in pain, feeling chunks of its skin incinerated from the rest of its body. Megalon’s electric beam ceased and as the giant insect flew closer, Orga bent down and leapt through the air. Megalon, taken aback, stopped midair and braced himself as the freakish alien collided against the insectoid’s body!

Orga snarled as it embedded its claws deep in the armored beetle’s exoskeleton. Megalon cried in pain, unable to support Orga’s weight and plummeted towards the earth. Planting its feet against Megalon’s abdomen, Orga’s eyes peered beyond and saw the ground nearing ever closer. Megalon screamed in pain as he felt the rooftop of a factory flatten beneath his back and driven deeper into the ground by Orga’s colossal weight.

Clenching its massive claws to form fists, Orga smacked its fists against Megalon’s face. Loud, booming sounds screeched across the area after each time Orga batted his fists against Megalon’s skull. Tired of the pain, Megalon’s triangular horns radiated an amber glow. A bolt of electrical energy rippled from the tip of Megalon’s horn and struck Orga’s throat. Chunks of flesh were blasted off, and with another electrical bolt, succeeded in knocking Orga off of him.

Orga stumbled back, his large shoulders struggling to keep the body balance so it wouldn’t fall. The alien creature snarled and released a hideous roar as Megalon rose to his feet. His compound eyes also witnessed a horrific sight; the shredded flesh sewing together, repaired just like new in a matter of seconds. Struggling to figure out what to do, Megalon dove down into the ground, plowing the soil out of the way with his drills.

Orga’s perplexed eyes peered down into the hole, but the alien creature suddenly felt the ground beneath its feet vibrate. Cracks began to split the ground asunder and Orga bent his head down to examine the situation; until suddenly a drill poked out of the ground and struck Orga’s face. Taken aback, Orga nearly fell to the ground.

The seismic activity stopped and Orga could neither hear nor see anything. Orga walked across the ground, surveying the land. The alien’s feverish eyes watched the ground, anticipating Megalon’s next move. Orga stood tall, feeling the eternal power flourish in the hole of its left shoulder. Particles of light, illuminating a bright amber glow, were sucked into the hole and the alien beast readied itself for anything.

Megalon’s drills broke through the ground behind Orga. With amazing speed, the insect god propelled through the ground and stood on its surface. As Megalon took a step towards Orga’s back, the alien’s eyes widened and with quick agility, Orga turned around and unleashed a powerful energy ray from his shoulder. The ray struck Megalon dead in the chest and swept the Seatopian guardian off his feet.

The ground shook violently after Megalon’s figure collided with the ground. Mounds of dirt were kicked high into the air as he skidded across the soil. As the arthropodic giant finally came to a halt, Megalon’s bulbous eyes widened in shock; Orga’s body descended from the sky, the alien’s claws yearned to rip into his natural armor.

Electrical surges of energy rippled down the star-shaped horn, but before Megalon could fire, Orga’s feet plowed into the Seatopian guardian’s abdomen. A screeching wail echoed for miles, for Orga’s assault had shattered Megalon’s ribcage.

The sweet nectar of Megalon’s DNA was refreshing, the feeling Orga felt after embedding its teeth deep into the deity’s armor. Already Orga could feel the genetic material being assimilated; a triangular horn began to stretch out of its forehead, pulsing with electrical power. The horn itself glistened in the sunlight, casting a bright radiant of light in all of World Children’s Land.

Orga felt its left hand mutate and manifest into an exact duplicate of Megalon’s palms. The mutant alien’s left hand became a long metallic drill, which glinted the sunlight off its shiny surface.

Megalon watched in horror as Orga’s jaws separated and enlarged. From out of the bowels of Orga’s throat, an organic web slit out of Orga’s jaws and widened. Megalon’s frightful cries could not be heard, for the organic web tissue joined with Orga’s jaws and closed in on the insect’s entire upper body. The two-toed feet kicked back and forth, trying to fight back.

But it was inevitable.

Orga’s skin tissue began to morph into a dark mixture of green and brown. Its eyes began to enlarge, mimicking Megalon’s own. Orga’s once massive back twisted and cracked, forming a new layer of carapace that manifested into insect wings.

Before the transformation could be complete, Orga’s eyes widened; a large object had been shot down his throat. Orga panicked, not sure of what to do. The only thing Orga could do was prepare to feel the agonizing pain. Bright, strokes of fire broke through his chest and back, raining his flesh on the entire region. Orga’s painful screams and moans were agonizing to hear.

Immediately, Orga relinquished the grip its jaws had on Megalon. While Orga’s jaws returned to their normal stature, the space monster lazily stumbled back. Already, the serious wounds it had sustained began to rapidly heal. Orga’s extraterrestrial eyes glazed up at Megalon, who now was clapping his metallic claws together. But when just as the taunting began, it ended as quickly as it started. The Seatopian guardian glared at Orga, afraid of the monstrosity standing in front of him.

Hesitant, Megalon’s triangular horn gleamed with electrical surges of energy and shot a torrent of power into Orga. But unlike before, Orga stood unharmed. But now the horn that rested on top of his head crackled with the same surge of power. Even more disturbing, particles of light were swallowed into the empty hole inside Orga’s shoulder.

Megalon bellowed a mighty cry, knowing he had failed Seatopia in stopping a creature that could easily destroy all life on the planet. Unable to close his bulbous eyes, Megalon braced himself for oblivion. An electrical beam and concussive energy blast lanced into his body, ripping the Seatopian guardian apart.

Orga continued to unleash its devious assault, until Megalon no longer stood or breathed. Smoke rose from the charred carcass and with its new accessories, Orga released a loud, terrifying cry that shuddered even the spirit of the Earth itself. 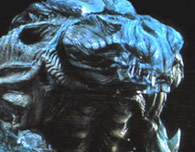