Clouds settled around the peak of Mt. Fuji. Covered with snow and rock, the ancient volcano looked down at the land covered with green and man-made structures. Groups of climbers struck the pickaxe into the hard, cold granite and tugged on the rope, pulling their bodies up with each step. In order to ensure their survival, the climbers all had to work as one and depend on the other. Mt. Fuji’s peak loomed in the distance, indicating they still had ways to go, but their climb was almost over. The climbers imagined themselves standing on top of the summit, standing on the highest point in all of Japan.

But then a shadow loomed over head. With climbing sunglasses shielding their eyes from the sun, they could only see the dark and benevolent form of a giant moth. A large shriek escaped the great moth’s mandibles as her wings continued to beat strong currents of wind to propel her body through the air. Her fur was a mixture of bright colorful lights that gleamed with beauty. The bulbous eyes glistened in the sunlight, casting a blue glow that filled the climbers’ hearts with courage. They faintly recognized the magnificent beast was none other than the Guardian of the Cosmos itself–Mothra.

Mothra flapped her mighty wings and propelled her body to the top of the volcano, resting atop the summit. It would take hours for the climbers to successfully make it to the summit, but for Mothra, it only took a few seconds. Her antennas twitched back and forth, as if picking up the presence of another. Sure enough, the climbers could hear the distant screeches of an object soaring through the sky. At first, they thought it was a jet, but the shape was all wrong.

Fear then hit the climbers.

It was the sky demon itself, Rodan. Sunlight reflected off its red scales and a blistering cry escaped its beak, sounding like thunder. Rodan’s feral eyes looked down at the large inactive volcano and could see the giant moth that mocked it. A loud screech once again shot out of the reptile’s beak as it made its descent. Long, triangular horns that curved out of its skull crackled bolts of crimson power.

Mothra released a loud shriek, trying to warn the climbers to seek shelter. But it was too late. A beam that radiated a bright glow shot out of the pteranodon’s beak and arched through the air. Mothra flapped her mighty wings, attempting to avoid the oncoming strike, but was unfortunate. Rodan’s uranium beam cleaved her head and a shower of sparks burst from the moth’s white fur.

Mothra screamed in agony but kept flapping her wings, escalating into the air. Faster than the speed of sound, Rodan dove through the air and clipped its wings across her back. Another scream escaped the benevolent moth’s mandibles as she felt a staggering pain pulse within her back. She turned and saw Rodan fly across the mouth of Mt. Fuji, charging her own beams in preparation.

Orange streaks of power rippled from Mothra’s antennas and struck Rodan, showering its body in sparks. The winged demon screeched in pain, smoke churning from its scalded flesh. Rodan banked a hard left until it faced its insect opponent and flew straight at Mothra. She responded in kind, soaring directly at the vicious pterosaur. They flew straight at the other, colliding over the mouth of Mt. Fuji. Sonic booms screeched from the two titanic monsters and shook the mountain itself. Avalanches tumbled down the sides of the volcano and the climbers were thankfully not caught in its wrath.

The ruler of the skies shrieked as it struck the fluffy exoskeleton with its sharp beak, popping with a shower of sparks. But Mothra backed away and revealed her beautiful wings, which crackled with golden hues of light. Rodan screeched in pain as Mothra’s lightning bolts electrocuted its body. From a distance, if anyone was to look up at the peak of Mt. Fuji, they would’ve been baffled by the bright auras of light.

Antennas twiddled and pointed directly at Rodan, who was still recuperating from the assault, and fired another pair of golden-orange beams. They struck the pterosaur’s throat and was sent plummeting towards the top ridge of the volcano. Cauldrons of smoke and snow burst into the air, enveloping Rodan’s figure. Violent chirps ceaselessly barked from the downed pteranodon, its eyes gleaming with vicious intent.

The benevolent moth circled overhead, blindly unleashing a barrage of her antenna beams. Bright sparks flashed from the dense smoke, bombarding the area until she stopped firing. Her compound eyes scanned the scorched earth, hoping the beast would be no more. But as the smoke was cleared from the flap of her wings, Rodan was nowhere to be seen. Viewing through hundreds of ommatidia, Mothra still couldn’t locate Rodan, that was until the pteranodon’s uranium heat beam struck Mothra’s backside.

The lepidoptera cried out in pain, sparks flashed on her back as strands of fur caught fire. The great moth turned to see the fire demon fly right over her, releasing a salvo of shockwaves within its wake. Mothra was helplessly hurled through the air and crashed into the side of Mt. Fuji, her large body proceeding to slide downhill.

Rodan circled overhead, its curved horns gleaming with power. The pterosaur dove towards the immobile moth, taking the chance to strike. Another torrent of Rodan’s uranium beam discharged from its beak and slit into Mothra’s abdomen. She shrieked in agony, but it only satisfied Rodan’s bloodlust even more.

Desperate, Mothra flapped her wings and generated golden pollen that scattered around her. Rodan recklessly flew through the cloud of pollen and cackled in pain, skin being burnt by the particles. Now able to roll on her belly and stretch out her wings, Mothra flew straight up and turned to see Rodan ensnared by her trap, its eyes bloodshot and skin sizzling from her golden pollen.

Rodan released a barrage of its uranium heat beams, but all of them were reflected back and forth by the pollen and tore into its body. Howling from its injuries, Rodan flapped its wings and generated strong gusts of wind that blew the sparkling pollen away. Without giving the dinosaurian menace a chance to rest, Mothra flew straight in and knocked the beast against the mountainous slope, which shuddered from the impact.

Mothra’s antenna beams rained down from the sky and blasted Rodan’s scales, further injuring the mutated pteranodon. Spreading out its magnificent wings, Rodan followed its vicious instincts and flew through the air, ascending to the sky. The pteranodon’s feral eyes pulsed with hatred, scanning for its airborne rival.

Sensing a presence from behind, Rodan banked a hard right, redirecting its original trajectory and flew up. Its chest spikes raked across the insect deity’s thorax, forcing Mothra from the sky as she fell head first into the volcanic crater. Even though the entry to molten rock was blocked by years of forming rock and ice, Mothra’s impact shattered it from the immense force. A shadow fell over Mothra and felt Rodan’s fortified beak pierce her exoskeleton. Helplessly, Mothra flapped her wings, but was only pushed down by Rodan’s strength and rage. The fire demon hollered in pleasure, cleaving Mothra’s cranium with its beak soon after.

The climbers who were lucky enough to survive and make it to the summit were baffled to see the battling titans, still fighting to the death. Mothra’s painful cries echoed on for miles as the great moth was being ripped apart by a vicious monster.

The pterosaur hopped up and embedded its talons deep into Mothra’s furry hide. Crackles of light sparkled around Rodan’s triangular horns and another wave of its uranium beam scalded Mothra’s body. The pain became too much after a relentless barrage, as the guardian felt her life force beginning to deplete.

Rodan’s reptilian eyes turned and focused on Mothra’s vibrant, spastic wings, and a terrible thought appeared in its prehistoric mind. Once again, Rodan powered up its uranium heat beam, but this time they tore into Mothra’s wings, puncturing scorching holes in its wake. Smoke rose from the torn wings and the fallen guardian continued to groan in agony.

The pteranodon flapped its wings and ascended to the sky, unleashing a barrage of uranium heat beams. Mothra’s body jolted up from the pain, but promptly fell back down. With her wings injured, Mothra was unable to take flight. Deep down, she knew her life was going to come to an end. Her bulbous eyes stared up at the sky, marveling at its beauty–before Rodan descended from the skies and struck the final blow.

Days passed when news of the battle between the two kaiju became public knowledge. A brave group of climbers scaled Mt. Fuji to show their bravery. But when they reached the summit, they were disgusted by the putrid remains of the former Guardian of the Cosmos, Mothra. 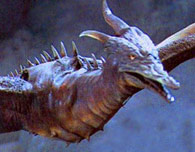