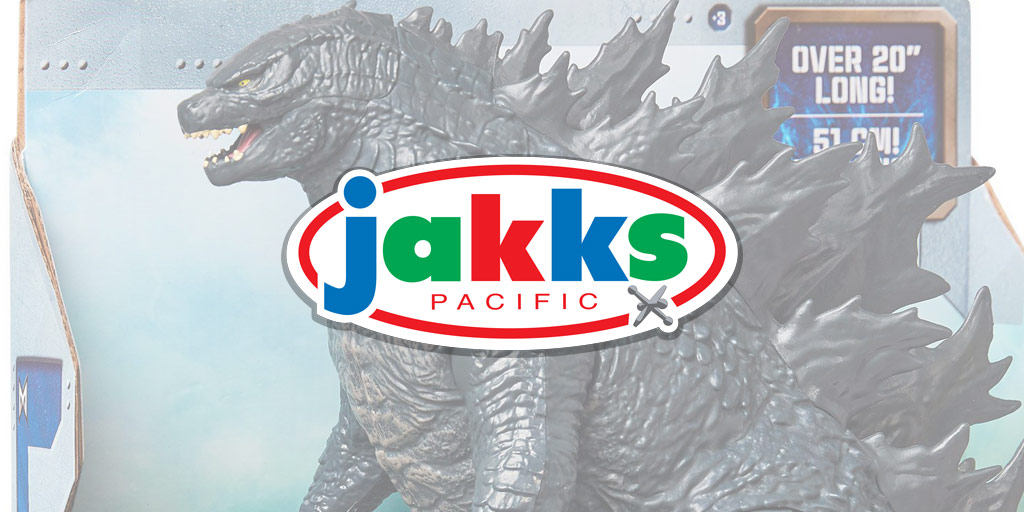 We interview Jakks Pacific about their Godzilla King of the Monsters toyline, which includes everything from figures on Rodan and King Ghidorah to the voice mask. Questions will be general, like why figures are or aren’t available in certain sizes, to design choices on the specific figures.

How did it come about that Jakks Pacific came to work on the Godzilla King of the Monsters line?
We have several Godzilla fans on the Jakks team, some of whom have worked on Godzilla toys for the last movie, and this is a property we were interested in for a while. We regularly work with Legendary Films and Warner Brothers and were just very persistent and passionate about our desire to do more than the 24” Godzilla that Jakks produced for Godzilla (2014). That figure was awesome, so it had to be a part of this line, but we wanted to offer more.

There are variations of the sets that I’ve reviewed and some of the releases vary in packaging/paint applications for King Ghidorah. For example, the Rodan set I got for review had one building while there are sets with two buildings included.
As sometimes happens with movie based product, we started development very late and had a very small product development window. We try to hit every detail on the first attempt, but when we can improve, we do. So, yes the product that arrived to retail shelves first was a little different. Additional paint deco was added to Ghidorah on the wings and heads of both the Monster Match Up smaller figure and the Monster Pack six inch figure. An additional set of buildings was added to both the Rodan and Ghidorah Monster Pack six inch figures. We know it is not ideal to do this, but also want people to understand that we want to provide the best value for the price.

Why are there no 20 inch figures of the other monsters outside of Godzilla?
The short answer to this is scale. Ghidorah is massive. If we were to make it in scale with Godzilla and Godzilla is 12 inches tall and 20 inches long, the product, packaging and price will all significantly increase. At the same time, we didn’t want to have too many of the same monsters in a bunch of different sizes. It just felt right to have the King of the Monsters be the biggest one.

The giant Godzilla had a little bit of a retooling done and a darker look for the mold yet the backplates are the same from the 2014 design. Why is this? In addition, why is it only available at Wal-Mart.com?
Similar to the above, the answer is that we wanted to make improvements from the first time around. The tooling is the same. We did adjust some of the colors. As far as distribution, Jakks partnered with Walmart for our Godzilla King of the Monsters line as a whole. Retail space is of course very tight and the 24” figure takes up a lot of shelf space. It just wasn’t feasible to have this on shelf. If you remember, Walmart didn’t have the 24” for the last movie either for the same reasons. However we did want to release it for those fans that missed it the last time and/or wanted and updated version.

Why is this line a Wal-Mart exclusive and not a more general release at include stores like Target?
Jakks felt like Walmart was the best partner for this brand. They share our excitement and enthusiasm for Godzilla and they wanted to support the brand in a big way for the year. We are very pleased to be partnering with Walmart on the program and achieving the broadest distribution of the full line.

In the 3 inch sets, there are different paint color schemes for Godzilla. What was the thinking behind this?
For the Monster Match Ups, we wanted to represent all four of the key monsters from the movie. Of course, most fans want to have Godzilla first and matching Godzilla up with Ghidorah, Rodan, and Mothra seemed to make the most sense. Of course some fans may be interested in only having one of the monsters and some will want them all. We didn’t want the fan who wants them all to end up with the same Godzilla three times. Then of course our design team has to make some decisions regarding what is the best means to differentiate Godzilla with paint. From there we took some liberties with regard to other decos of Godzilla which have been seen and were popular from previous Godzilla toys.

The Godzilla/Mothra set seems to be hard to find. Will there be another printing of this set or is it a one and done printing?
There really isn’t a chase component to the Monster Match Up figures, so this is likely just something that will resolve itself over time. Sometimes one character sells faster than another and it is not until most or all of the figures sell through that another master carton of product is available on shelf. Ultimately Walmart.com will be another resource to get all the items, although at the time I write this it looks like they need to get back in stock on a few items as well.

In the film, King Ghidorah doesn’t have a claw on his wing yet on the toy, it does. When in production on the film did you receive final toy designs and the production started?
It is absolutely true that the development timeline for a toy and for a movie are not in line. The director may still be tinkering with fine details of the film now while we needed to finalize our designs last July.

In both the 6 and 3 inch set, King Ghidorah has a lot of trouble standing on his own unless the wings are folded all the way up. Should there be a second printing of these figures, will adjustments be made to the design?
As I mentioned, we always review our lines to see if there are ways to improve them. This is likely a physics and center of gravity challenge. We have a limited ability to adjust the product stance based on where the articulation points are and the size and weight of the figure and its wings. We will look into this further, but I can’t promise we can solve it 100% that all poses will result in the figure standing perfectly.

Which monster was the most difficult to design for the line? Easiest?
Each monster has its own unique challenges and opportunities from a design standpoint. The first of course is that we are trying to keep them all in at least a relative scale when they vary in size in the movie. Scale is important to the story telling, but if we went to true scale, Mothra would be significantly smaller than Ghidorah and not have the same value as a toy. As far as specific details, getting the colors right on Rodan and Ghidorah were tough. There isn’t necessarily a true, base color to work from. The lighting and shading of the characters in the movie varies, so Rodan can go from a muted red to almost a dark black. We want the base colors of both to look good. Then we added the decoration to the wings both so it doesn’t look too flat but also shows the detail in the sculpt. Mothra has very colorful wings and we wanted to execute those as best we could so we used a different process which also makes the wings more flat. Godzilla of course is the one everyone wants to work on and make sure to get correct. The simplest of details can become complicated because we are trying to be as perfect as we can within the limits we have for the size of the figure. All in all, Jakks is really excited for everyone to see the line that many people on our design, engineering, and packaging teams have been working on for the last a year. The passion of the Godzilla fans is a fun thing to be a part of we hope Jakks can enhance your enjoyment of the Godzilla franchise in some small way. Everything we have seen of the movie is spectacular and we are certain you all will not be disappointed this summer.