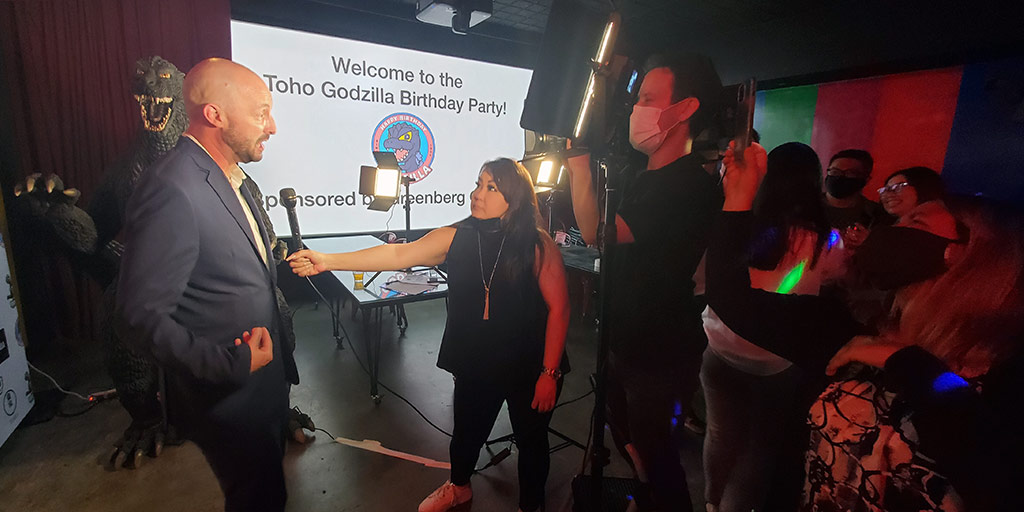 On Wednesday November 3rd, 2021, I was invited to the “Godzilla’s 67th Birthday Party” at the Alamo Drafthouse in Los Angeles, California. During the party, I interviewed Chris Mowry (Creative Manager, Toho) and Lora Cohn (Managing Director, Licensing, Toho International, Inc.). Special thanks to Jennifer Cruz for setting this interview up!

Below is an audio transcript of the interview. Thanks goes to Noah Percival for transcribing this interview while I edited it further for clarity.

Chris Mirjahangir: Godzilla’s had a huge resurgence in popularity due to the MonsterVerse. Do you think that relationship will continue? What about Toho’s own Godzilla cinematic universe which was mentioned a few years back?

Chris Mowry: No real plans just yet that have been announced. I would say that you know we’ve been making films for 67 years so I wouldn’t imagine that’s a good stopping point you know? But we have new products you know the animated series Singular Point, we will soon to be announcing a comic book crossover, so there is new content coming. It might not be what people are expecting though.

Mirjahangir: They can kind of coincide the MonsterVerse?

Mowry: There’s a Godzilla for everybody out there.

Mowry: Decades old but there’s something out there for everybody.

Mirjahangir: So no one should think that the MonsterVerse is coming to an end?

Mowry: It made a ton of money why not?

Mirjahangir: Yeah I know they’re not gonna kill something that makes money.

Mirjahangir: (Gojira 1954) being shown off in 4K for the first time and everything and usually it’s kind of indicative of a future home release. Will that happen? With Godzilla 4K here in the U.S.?

Mowry: I believe so. Released here or Japan though? That’s the big question.

Mowry: Ah that I’m not so sure of.

Mowry: I would imagine so though.

Mirjahangir: I remember like Criterion did their own 2K transfer (for the original Gojira Criterion blu-ray release) Going back to the 4K transfer, what was different?

Mowry: That you’d probably have to ask Japan about.

Mowry: We have really been in the dark on that one.

Cohn: Yeah we weren’t that close to the restoration.

Mowry: To be honest we were shocked they let us show the film first in the states before they showed it in Japan!

Mirjahangir: Was it an instant yes or did it take some doing?

Cohn: It took some doing.

Mowry: It think it’s because, honestly because of the fans they made it easier than us just asking! There was a lot of support based on GvK, Singular Point has done really well, all of our products have sold just phenomenally well. Whether it’s Mondo’s drops or Super7’s or you know Mezco’ s or anybody like that so the home office knows there’s fans here, they know how important our market is so I would almost consider this is a birthday present for the fans here in the U.S.

Mirjahangir: Singular Point you had mentioned is that going into a season two or nothing announced yet?

Mowry: We’ve honestly not heard anything but we do have a merchandise program rolling out based on the first season at least so if it comes there’s something to tide people over with.

Cohn: Well you know we work very closely with Mondo who is part of Alamo they’re owned by the same company so and we were just fans of this. Godzilla is so engrained in pop culture and it just made sense to do it here. 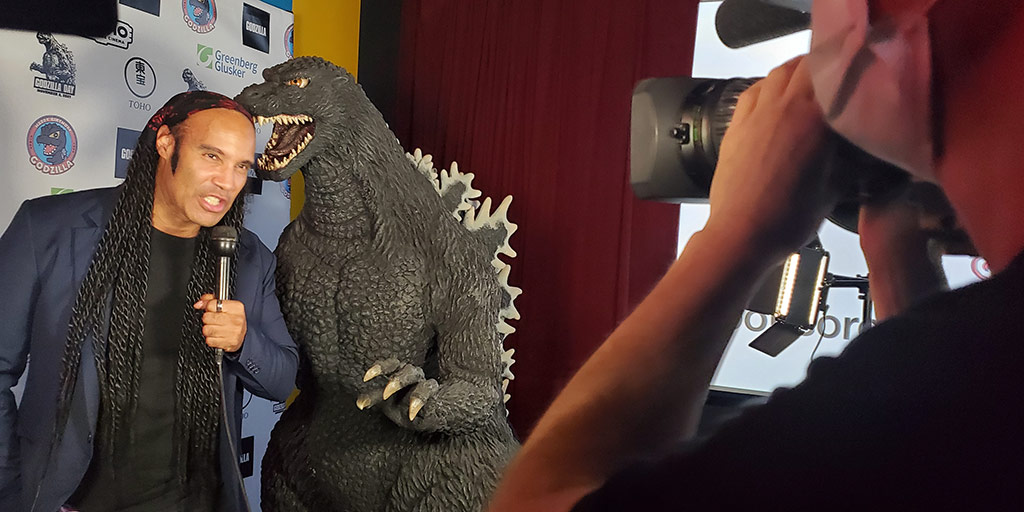 Mirjahangir: So with Stern Pinball how did you guys get hooked up with them?

Cohn: Oh my God I’ve know Gary Stern forever but I think it was in development before I started at Toho… we’ve been talking about it.

Mowry: It was and then talking to them my previous previous life before comics was video games and it ended up a bunch of my old co-workers from Midway worked there so it’s kind of a family project.

Cohn: Yeah I mean they’re the only remaining pinball company left in the world I believe and they killed it. They’ve they’ve, I don’t know if you’ve seen the game or pictures of it but Chris what were the statistics? It sold out…

Mirjahangir: Very limited edition (number) of them I believe…

Mirjahangir: I think it was like a thousand units? It sold out in like twenty four hours.

Mowry: It’s up there! Yeah it’s up there in price so the fact that there’s people out there with that much money. *laughs*

Mirjahangir: There’s always been in the past and you know this, like how much and how tough it is for Godzilla merchandise to come out. Now it’s just like this huge influx! How is it for you just to adapt to that?

Cohn: He’s run out of room in his apartment! *laughs*

Mowry: *laughs* Definitely! I mean the good thing is like now I get to be very picky like “Oh can I get one of those?” No, I still buy everything I get but honestly I think with me its finding the right partners and we have the right partners in place now and the partners are making new products and we just finished this really successful licensing summit, our first ever! Laura killed it. The whole team killed it really but it’s really to tell people like “Hey there’s more than just Godzilla.” Like fans know all these characters we have a fab five you know the Mothra, King Ghidorah, Mechagodzilla. People know these characters globally so not just Godzilla feel free to do stuff with these characters. Expand out! Like wanna think of something crazy never been done before? Then do it you know?

Mirjahangir: Toho aired a number of Godzilla films in 4K over the summer in Japan. Do you see them ever having physical releases? In the U.S. or in Japan at some point?

Mowry: I would almost guarantee like a 4K thing is gonna happen.

Mirjahangir: Well even the Hanna-Barbera (70’s animated Godzilla series), which is been shown on the Official Toho YouTube channel. Could that actually have a physical release?

Mirjahangir: No? Back to eBay and bootlegs.

Mowry: I would say this with all truthfulness we’re working on it.

Mowry: It might be something out of our hands though.

Mowry: This team is fired up to do it. 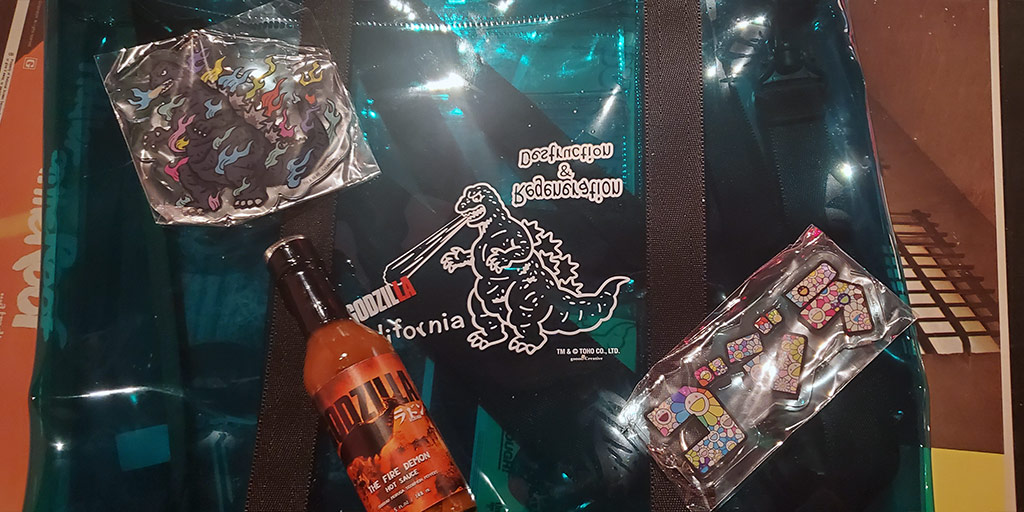 Mirjahangir: Could there also be room for non Godzilla franchise 4K remasters of films like The War of The Gargantuas (1966) and Rodan (1956)?

Mowry: Again I would say we could definitely bring it up but we’ve brought up stuff like Matango things like that…

Mowry: No it just there’s a lot. Japanese entertainment law is very different. There’s a lot of different rights holders-it gets really confusing. I still learn something every month we have a call with the Godzilla room over there but I would say like again look at all the media that’s been out for those films in the past.

Mowry: I wouldn’t doubt. I would never say that there’s not going to be.

Mirjahangir: As cool as like a lot of American companies are having their take on Godzilla I would like to see more Japanese medium over here too because they have a different art style.

Cohn: That’s one of our strategies

In addition, I filmed this special introduction by Godzilla historian Steve Ryfle which preceded the first ever 4K version of Gojira which was part of the Godzilla’s 67th birthday celebration at the Alamo Drafthouse theaters in Los Angeles, California on November 3rd, 2021. Ryfle is introduced on stage by Mowry, who was interviewed above.

While there is a wealth of information in the introduction, the audio is out of sync with the video in portions and this will be corrected at a later date.