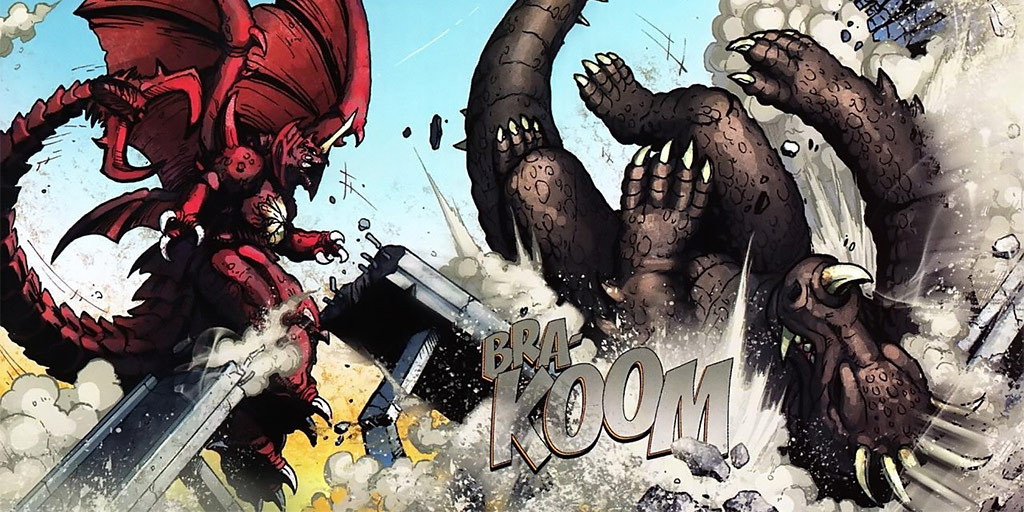 Comic book artist Matt Frank is a sellout…or his debut comic Godzilla Legends will be once this book hits store shelves that is. To compliment the normal comic review, found here, I’m once again doing another review with images from the publication, a Graphic Review of Godzilla: Legends #1, to give a better feel for what fans are in store for.

With that, this is the comic Godzilla fans have been waiting for with its beautifully written, easy to follow story, lighthearted humor and brilliant artwork. The artwork is so good in  fact, that almost every panel of the comic is suitable to be its own work of art suitable for framing. The book is a welcome addition to the IDW Godzilla comic series after the excellent “Gangsters and Goliaths” mini-series and the lackluster “Kingdom of Monsters” which seems to meander to no end.

Story: I’m just going to do a quick summary because I want everyone who reads this book to do it with the freshest mind possible. In this universe, the monsters are all very well known and all have an established history. The history of Anguirus for example is documented in a few panels, seen to the right, but pretty much gets to the core of the character. A scientist discovers that certain frequencies can call monsters while researching communicating with whales. He finds that each monster responds to very specific frequencies and is able to call Anguirus to fight the rampaging Destoroyah. The battle is very well done here and is very quickly paced with a satisfying ending.

Artwork: Matt Frank’s artwork is very lively and colorful in this book. Destoroyah’s beam pops right off the page and the use of motion blur, seen below for Destoroyah dragging Anguirus, is very effective. As I stated in the intro, almost every panel is suitable for framing. The human characters are very well designed here. Each character looks their part very well. The real stars though, are the monsters. Anguirus and Destoroyah really come to life here and it’s amazing to see them drawn with such detail. It’s a nice touch that Matt Frank used the Showa era design for Anguirus as well.

Hello Destoroyah, my name is Anguirus. I’m here to kick your ass.

Cover(s): It was really cool to see both Bob Eggleton and Art Adams supply cover art for the debut of Godzilla Legends. Having both Eggleton and Frank doing cover art is a dream come true for the fandom but adding in Art Adams to the mix just pushes it over the top. Matt Frank’s art leans more toward the mysterious with Godzilla looming in the background over Destoroyah who himself towers over Anguirus. One of the strengths in Frank’s art has always been the use of lighting and it’s done very well here adding a sense of foreboding. Bob Eggleton’s cover features no Destoroyah while Anguirus is Showa era and Godzilla is from the Millennium era in this cover which is a nice contrast. The burning sky look is a compliment to Frank’s cover and is very well done by the legendary artist. Art Adam’s cover is simple yet effective. It doesn’t feature Destoroyah or Godzilla but rather the true star of the comic, Anguirus. The Showa design is here again but the cover is more straightforward than the other two. It’s a nice contrast.

Now let’s get these artists into the “Kingdom of Monsters” series to add some much needed life to it, eh IDW?

Conclusion: THIS is the perfect example of having talented hardcore fans working on a film series they know inside and out and love to death. It doesn’t seem to be “designed by a committee'” like the ” Kingdom of Monsters” series does and the true love and affection for the films shine through in the writing and the artwork. It was a VERY wise move on the part of IDW to involve Matt Frank and writer Jeff Prezenkowski to launch this series and include fan favorites Bob Eggleton and Art Adams to do the covers thus making the book an epic release.