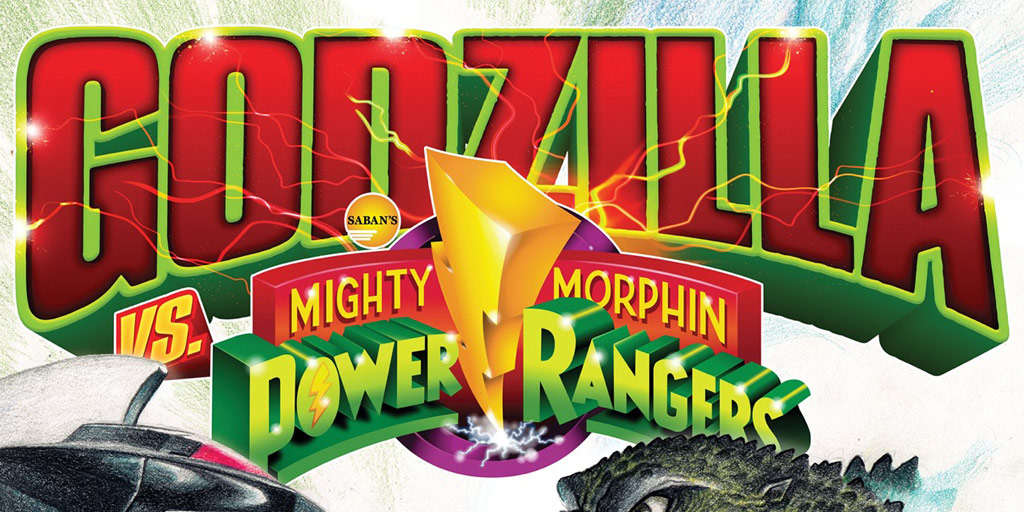 As briefly referenced by Toho International Creative Manager Chris Mowry in a more recent interview, a new comic book crossover featuring Godzilla has been announced. Under license by Toho International, Inc., and in partnership with BOOM! Studios and Hasbro, the King of the Monsters will be facing off against the Mighty Morphin Power Rangers in a five-issue miniseries.

A press release for the upcoming comic book crossover featuring Godzilla and the Power Rangers has been released. Press information and downloadable cover artwork courtesy of IDW:

Meet for the First Time in Crossover Comic Series from IDW

Titans of Film and Television Smash Cities and Join Forces

In The Five-Issue Miniseries Event of 2022

When Rita Repulsa uses an ancient artifact to transport herself to a universe without Power Rangers, she finds herself in a world with aliens, kaiju, and… Godzilla! Hoping to annihilate this new foe, Rita hurls her own terrible creatures into battle. But she never expects that the Rangers have followed her to this alternate reality, pitting the Dinozords themselves head-to-head with the King of the Monsters!

“I am honored to bring two iconic franchises like Godzilla and the Power Rangers together. I’ve been a massive Godzilla fan since before I could read, and my love for the King of Monsters has never faded in all those years. Likewise, I’ve always loved Tokusatsu superheroics, and vividly remember watching the first episode of Mighty Morphin Power Rangers when it came out. This is a crossover that I suspect will take readers by surprise—but it makes complete sense!” says Bunn. “Writing for these characters is a dream come true for this giant monster-loving kid-at-heart, and when readers pick up this book, I want them to feel that sense of awe and wonder that these characters have inspired for decades!”

“This will be the biggest, most stratospheric crossover I’ve ever drawn!” says Williams. “It’s the combination of so many big genres: Giant Monsters vs. Mechs, martial arts vs. science and magic, with lots of collateral destruction! I’ve been watching Mighty Morphin Power Rangers episodes and Godzilla films to submerge my brain space, and have been reminded how fantastic and charming these designs are and how much fun prior creators had with their designs. I’m excited to contribute to the long legacies of these franchises!”

“We couldn’t be more thrilled about this latest crossover event at IDW Publishing,” says editor Tom Waltz. “Not just because a story featuring both Godzilla and the Mighty Morphin Power Rangers checks off every awesome box on a comic-book crossover list, but also because we’ve got two of the best in the business — Cullen Bunn and Freddie Williams II — combining to bring it into being.”

“When BOOM! Studios first stepped into the world of the Mighty Morphin Power Rangers, we had some big plans and huge dreams, so it’s amazing to be able to bring to life the biggest and most exciting monster mash-up of the century,” says Dafna Pleban, Senior Editor, BOOM! Studios. “It’s been an incredible process to put together this epic series with our friends at IDW, Toho, and Hasbro. We can’t wait to show fans everything they could ever hope to see and more from the King of the Monsters and the Power Rangers universe.”

Godzilla Vs. The Mighty Morphin Power Rangers #1 will be available with multiple cover variants for retailers and fans to enjoy, including Cover A by series artist Freddie Williams II, Cover B by E.J. Su (Transformers), and a special connecting Retailer Incentive edition by Williams II which combines with the RI covers for issues #2-5 to make a glorious panorama of kaiju and Zord conflict!

For information on how to acquire Godzilla comics and graphic novels from IDW, please contact your local comic shop or visit www.comicshoplocator.com to find a store near you.

IDW (NYSE AMERICAN: IDW) is a leading media company providing uniquely compelling stories and characters in various genres for global audiences across all entertainment platforms. The award-winning IDW Publishing and IDW Entertainment divisions holistically evaluate and acquire IP for franchise development across comics and graphic novels, television, theatrical, games, merchandise, and other entertainment platforms, in addition to bringing world-renowned storytelling to life with our creative partners.

BOOM! Studios was founded by Ross Richie in 2005 with the singular focus of creating world-class comic book and graphic novel storytelling for all audiences. Through the development of four distinct imprints—BOOM! Studios, BOOM! Box, KaBOOM!, and Archaia—BOOM! has produced award-winning original work, including Lumberjanes, The Woods, Giant Days, Klaus, and Mouse Guard, while also breaking new ground with established licenses such as WWE, Mighty Morphin Power Rangers, Cartoon Network, and The Jim Henson Company properties. BOOM! Studios will also bring their original series to life through a first-look relationship with Netflix. Please visit www.boom-studios.com for more information.

Hasbro (NASDAQ: HAS) is a global play and entertainment company committed to making the world a better place for all children, fans and families. Hasbro delivers immersive brand experiences for global audiences through consumer products, including toys and games; entertainment through eOne, its independent studio; and gaming, led by the team at Wizards of the Coast, an award-winning developer of tabletop and digital games best known for fantasy franchises MAGIC: THE GATHERING and DUNGEONS & DRAGONS.

The company’s unparalleled portfolio of approximately 1,500 brands includes MAGIC: THE GATHERING, NERF, MY LITTLE PONY, TRANSFORMERS, PLAY-DOH, MONOPOLY, BABY ALIVE, DUNGEONS & DRAGONS, POWER RANGERS, PEPPA PIG and PJ MASKS, as well as premier partner brands. For the past decade, Hasbro has been consistently recognized for its corporate citizenship, including being named one of the 100 Best Corporate Citizens by 3BL Media and one of the World’s Most Ethical Companies by Ethisphere Institute. Important business and brand updates are routinely shared on our Investor Relations website, Newsroom and social channels (@Hasbro on Twitter, Instagram, Facebook and LinkedIn.)