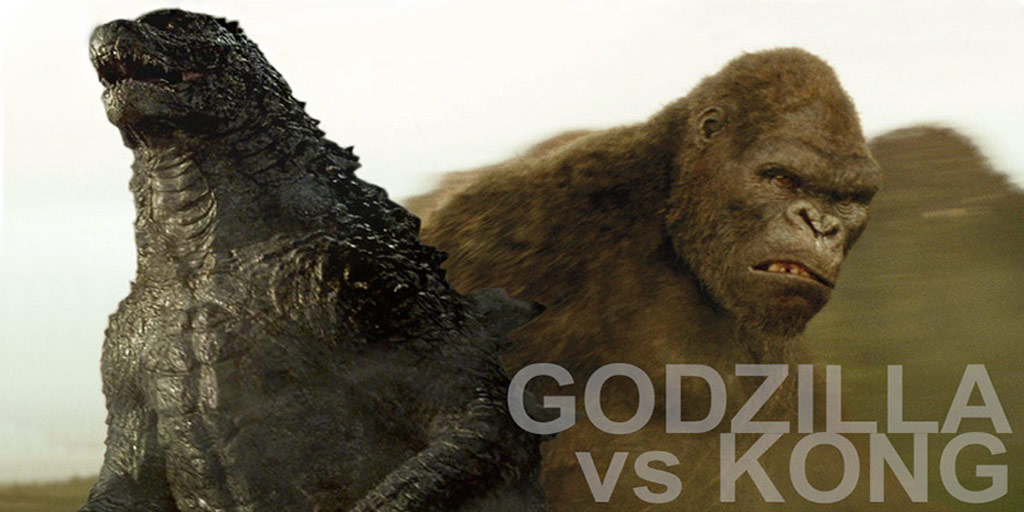 As Legendary Pictures moves past Kong: Skull Island (2017) and looks toward the future of the MonsterVerse, naturally news is starting to build for the next appearance of Kong, as the character is set to tangle with Godzilla in 2020.

Legendary has a new press release available. While it shares little in the way of the movie itself, it does name numerous partners working on merchandise:

TWO ICONIC TITANS TO CLASH ONSCREEN AND AT RETAIL WITH EXCITING
GODZILLA VS. KONG GLOBAL PROGRAMS

The much-anticipated epic action adventure’s retail and merchandise partnerships to provide fans with a robust offering of products and experiences in time for the film’s November 20, 2020, global release

BURBANK, Calif., February 20, 2020 – As excitement builds for the November 20, 2020, release of Legendary Pictures and Warner Bros. Pictures’ epic action adventure Godzilla vs. Kong, Legendary and Toho Co. Ltd. have announced an exciting slate of licensees that will deliver a diverse offering of merchandise and experiences to fans as they gear up to see two of cinema’s biggest icons battle it out on the big screen. International toy titan Playmates has been named master toy partner, with forthcoming products themed to Godzilla vs. Kong, as well as additional product lines inspired by Legendary and Warner Bros.’s Monsterverse and Classic Toho Monsters.

“Kong and Godzilla permeate every aspect of pop culture, and we are excited to bring them back to the forefront of the zeitgeist with our best-in-class partners,” said James Ngo, Executive Vice President, Franchise Management, at Legendary Entertainment. “We are also working to expand this program into gaming, fashion, sports, food & beverage and more in order to create additional entry points for fans to engage with these two larger-than-life titans.”

“Godzilla has become a beloved international figure since its first film nearly 65 years ago,” said Keiji Ota, Chief Godzilla Officer (CGO) of Toho.  “We’re thrilled to work with these companies to bring the awesome power of Godzilla vs. Kong to life with toys and products for kids of all ages.”

Additionally, the Godzilla vs. Kong publishing program, which is being rolled out by Legendary Comics, will include two graphic novels, an art book, novelizations, and children’s books, offering fans a chance to delve deeper into the adventures of the great Godzilla and mighty Kong.

About Godzilla vs. Kong:
On November 20, 2020, comes the epic next chapter in Legendary Entertainment and Warner Bros. Pictures’ cinematic Monsterverse, Godzilla vs. Kong, starring Alexander Skarsgård, Millie Bobby Brown, Rebecca Hall, Brian Tyree Henry, Shun Oguri, Eiza González, Julian Dennison, Lance Reddick, with Kyle Chandler and Demián Bichir, under the direction of Adam Wingard. In a time when monsters walk the Earth, Godzilla vs. Kong explores humanity’s fight for its future as the titans are set on a collision course resulting in a spectacular battle for the ages. Fans can join the conversation by using the official hashtag: #GodzillavsKong on social media.

About Legendary:
Legendary Entertainment is a leading media company with film (Legendary Pictures), television and digital (Legendary Television and Digital Media) and comics (Legendary Comics) divisions dedicated to owning, producing and delivering content to worldwide audiences. Legendary has built a library of marquee media properties and has established itself as a trusted brand which consistently delivers high-quality, commercial entertainment including some of the world’s most popular intellectual property. In aggregate, Legendary Pictures-associated productions have realized grosses of more than $17 billion worldwide at the box office. To learn more visit: www.legendary.com.

About Toho:
Toho Company, Limited, is a Japanese entertainment studio focused on the development, production, exhibition, and distribution of powerful content for motion pictures, television and theater. Founded in 1932, it remains a prominent force in bringing brands and original storytelling with versatile talents to audiences worldwide. Its subsidiaries include Toho Cinemas, the highest grossing exhibition company in Japan. To learn more, visit: www.toho.co.jp/en/.

It was hinted at way back in June, but it’s finally official: Godzilla vs. Kong has been delayed. The new date, as reported by Variety and others, is now November 20th, 2020.

The delay probably shouldn’t come as a huge shock, given that news hasn’t picked up as one would expect this close to the original date, although it still marks a substantial delay.

In an article published by Deadline, Warner Bros. executives Toby Emmerich and Peter Roth brought up the possibility of Godzilla vs. Kong being delayed: “[Godzilla vs. Kong] might come out later in the year, so we can deliver an A+ movie,” Emmerich commented, noting that they “will deliver for fans in the way they were looking for.”

An early advertisement for Godzilla vs. Kong has appeared at Licensing Expo, paired with another of Legendary’s movie projects, Dune (2020). The image shows Godzilla and Kong locked in combat, with a tagline that reads “ONE WILL FALL”.

This is how Legendary are advertising Dune and Godzilla vs. Kong at Licensing Expo. pic.twitter.com/BzFQIgwT03

Alexander Skarsgård was recently video interviewed by Collider, with the actor expressing his enjoyment working on Godzilla vs. Kong and how it will be “tonally quite different” from other films he’s been apart of in the last 2 years. Discussion of the movie starts around the 2 minute 53 second mark in the link provided.

As reported by Deadline, Lance Reddick is the latest addition to the Godzilla vs. Kong cast. Some of Reddick’s more well known portrayals include Charon from the John Wick movie series, Cedric Daniels from HBO’s The Wire, and Matthew Abaddon from the television series Lost. Reddick is also no stranger to giant monsters, having appeared in an uncredited role as a soldier in 1998’s GODZILLA.

With principal photography finally underway, an official press release for Godzilla vs. Kong has been made available, courtesy of Warner Brothers. The notes also include a long-awaited plot synopsis.

WARNER BROS. PICTURES’ AND LEGENDARY ENTERTAINMENT’S MONSTERVERSE SHIFTS INTO OVERDRIVE AS CAMERAS ROLL ON THE NEXT BIG-SCREEN ADVENTURE
“GODZILLA VS. KONG”

Director Adam Wingard takes the helm to bring the long-awaited face-off between these two iconic titans to the big screen.

BURBANK, CA, November 12, 2018 – Following the global success of 2014’s “Godzilla” and 2017’s “Kong: Skull Island,” and in the lead-up to the 2019 release of the highly anticipated “Godzilla: King of the Monsters,” comes the next chapter in Warner Bros. Pictures’ and Legendary Entertainment’s cinematic Monsterverse: “Godzilla vs. Kong.” Beginning production today, the epic action adventure will pit two of the greatest icons in motion picture history against one another – the fearsome Godzilla and the mighty Kong – with humanity caught in the balance.

In a time when monsters walk the Earth, humanity’s fight for its future sets Godzilla and Kong on a collision course that will see the two most powerful forces of nature on the planet collide in a spectacular battle for the ages. As Monarch embarks on a perilous mission into uncharted terrain and unearths clues to the Titans’ origins, a human conspiracy threatens to wipe the creatures, both good and bad, from the face of the earth forever.

Filming is taking place in Hawaii and Australia. A presentation of Warner Bros. Pictures and Legendary Entertainment, “Godzilla vs. Kong” is currently scheduled for release on May 22, 2020. The film will be distributed in 3D and 2D and in select IMAX theaters by Warner Bros. Pictures, except in Japan, where it will be distributed by Toho Co., Ltd.

Cast additions for Godzilla vs. Kongcontinue to roll in. As reported by Variety and Deadline respectively, actress Jessica Henwick – known for her role as Nymeria Sand who first appeared in Season 5 of the popular fantasy/drama television series Game of Thrones – and Japanese actor Shun Oguri in his Hollywood debut will be starring in the 2020 sequel to Godzilla: King of the Monsters (2019). Like most of the cast before them, their roles are currently not known.

Meanwhile, director Adam Wingard recently posted on his Instagram account a storyboard teaser for Godzilla vs. Kong. The picture shows only a fraction of a storyboard sketch accompanied by text briefly describing Godzilla’s reaction to something presumably just out of frame in the photo.

No specifics regarding the picture were shared, though the enthusiastic Wingard did note how shooting for the movie was to begin soon: “This is the only part of the Godzilla Vs Kong storyboards that I can share. We start shooting this week after more than a year of preproduction. It’s finally happening!”

The cast for Godzilla vs. Kong continues to grow as Rebecca Hall of The Prestige (2006) and Marvel’s Iron Man 3 (2013) fame, alongside Baby Driver (2017)’s Eiza González, have joined the movie according to exclusive reports published by Variety and Deadline respectively.

In an exclusive announcement from Deadline Hollywood, Emmy Award-winning actor Alexander Skarsgård will be starring in the 2020 movie. Like the previously-reported Demián Bichir, Skarsgård’s role is currently unknown.

According to the Hollywood Reporter, actor Demián Bichir of The Hateful Eight (2015) and The Nun (2018) fame is slated to appear in Godzilla vs. Kong. Bichir will be joining Millie Bobbie Brown and Brian Tyree Henry as one of the leads, though his role is currently unknown.

As shared in a video via Gormaru Island, the production of Godzilla vs. Kong in Australia was announced by Prime Minister Scott Morrison at Village Roadshow Studios. Filming is expected to start before the end of the year, with the movie employing 500 full-time staff and 600 casuals.

11:05 PM – Actor Brian Tyree Henry of Atlanta fame will be joining the cast of Godzilla vs. Kong, as exclusively reported by Variety. While his character’s role is unknown, he is said to play “a significant role” in the plot. Henry will be starring alongside other confirmed actors including Millie Bobby Brown, Julian Dennison, and Kyle Chandler.

In the latest issue of Production Weekly courtesy of Gormaru Island, principal photography for Godzilla vs. Kong is slated to begin next month on October 1st. Currently, the only confirmed film locations are in Atlanta, Hawaii, and Australia.

As the project continues to develop, casting news is starting to come in. First off, Van Marten, who will appear in the upcoming Ant-Man and the Wasp, and Ziyi Zhang, Memoirs of a Geisha, are set to appear in the film. Ziyi will also appear in Legendary Pictures’ Godzilla: King of the Monsters, and will reprise her role from that movie. It’s also been announced that young actor Julian Dennison, from Deadpool 2, will appear in the movie as well in a yet to be revealed role.

Casting is still not revealed for the project, although director Adam Wingard noted that characters seen in the 2019 Godzilla film will also appear in the 2020 battle royale flick between the two titular monsters.

After moving Kong: Skull Island (2017) from Universal to Warner Bros. in 2015, Legendary Pictures announced the natural conclusion to that news in October of 2015. The company stated that a Godzilla vs. Kong movie was in the works.

Since then, the company has focused most of their efforts on the 2017 King Kong film and the upcoming Godzilla: King of the Monsters. However, with Skull Island released, eyes are now focused on the next movie to feature the character, which is coming on May 22nd, 2020.

Naturally, some of the first news on the production is related to the staff who will bring it to life. The first major announcement came with the confirmation of the director. For this responsibility, Legendary Pictures tapped Adam Wingard, who has previously directed You’re Next and The Guest.

Writing duties are being split amongst a writers room, which is being led by Terry Rossio, the scribe behind the original Pirates of the Caribbean trilogy. He is joined by a huge group of writers, which include former comic author J. Michael Straczynski, who also worked on the Thor movie and World War Z. Lindsey Beer, who is an up and coming writer attached to assignments like Barbie, Patrick McKay, Star Trek Beyond, T.S. Nowlin, Maze Runner, Cat Vasko, Grrl Scouts, J.D. Payne, Star Trek Beyond, and Jack Paglen, Transcendence, are also in the writers room.