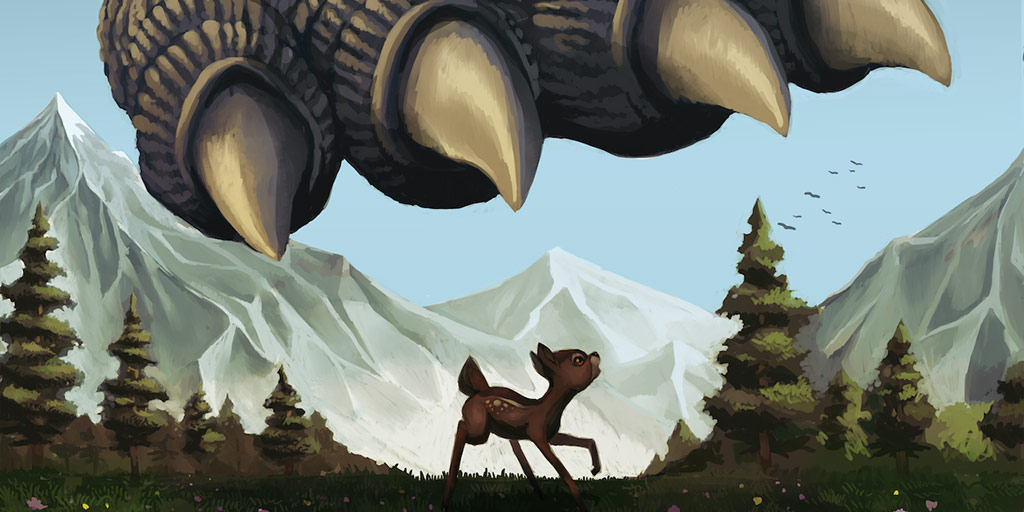 One good way to befriend a Godzilla fan is by asking them, “What was your first Godzilla film?” For years, I’ve always said Godzilla 1985. A few years later, I started to respond back with The Return of Godzilla (1984), the superior Japanese version of the same film. It’d be even longer before I realized that Bambi Meets Godzilla was technically my first Godzilla movie, as it preceded Godzilla 1985 on my VHS copy.

In 1969, Marv Newland drew an animated Bambi Meets Godzilla short for $300. It was a simple yet memorable animation that would launch his career as an animator. Now fifty-one years later, I’m here with my take on what would happen if these two cinematic icons clashed – and I’m going to show you how I did it.

This is a filmmaking tutorial!

First things first, let’s talk gear. In today’s modern era, we have many options when it comes to cameras, lighting, equipment, editing software, etc. It really comes down to your unique vision, experience, and—drumroll—budget.

I’m going to show my hand: For my camera, I use the iPhone X. Its ProCamera app has played a substantial role in my stop motion projects. For setup, I’ve designed an elaborate green screen studio in my office. When it comes to editing, Adobe After Effects and Final Cut Pro X are my partners in crime. We’ll be exploring After Effects in greater detail shortly.

For shooting footage, I record everything in 4K resolution (3840 x 2160). The main reason why I do this is because it gives me more latitude to edit scenes later in post-production. Whether the scene is widescreen or in closeup, its large resolution gives me the option to pick any shot I want. To do this, simply set your composition settings to 1920 x 1080, and when you import your 3840 x 2160 footage, you’ll see what I mean.

We’re now going to breakdown a scene from my Godzilla vs. Bambi film. We’ll start with the scenery. 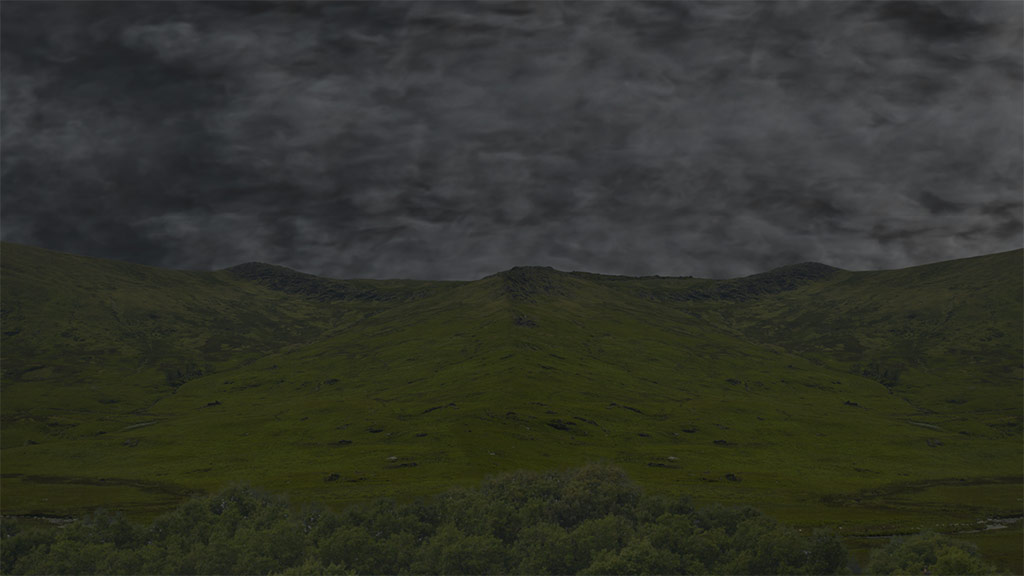 For our establishing shot, we have a mountainous terrain with accompanying storm clouds swirling in the background.The mountain terrain, trees, and storm cloud animation are compliments of ProductionCrate. Check ‘em out! They’re well worth the investment. 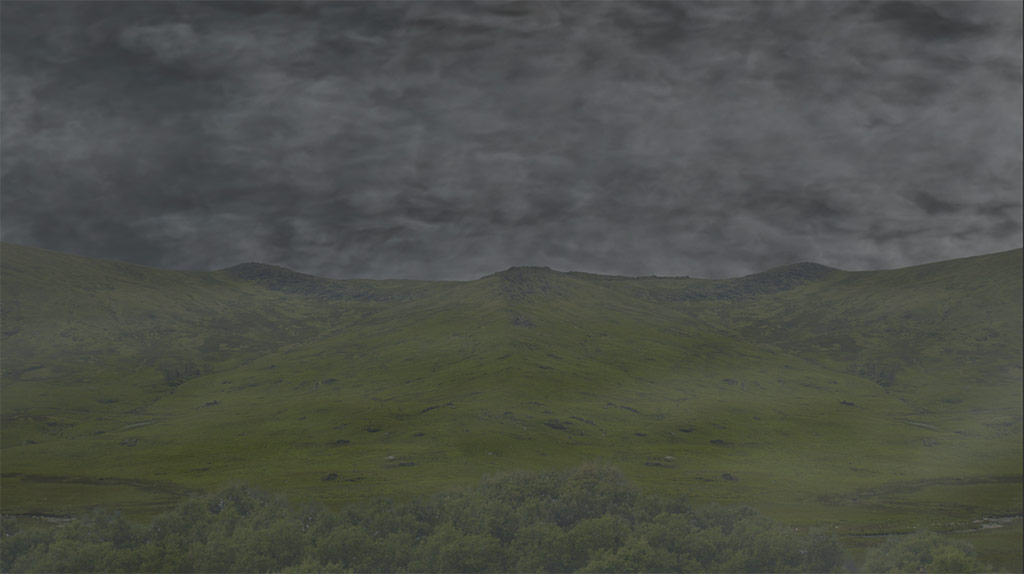 Next, we add a fog element layer to add an ominous atmosphere. ActionVFX is a great resource for these specific kinds of professional elements. 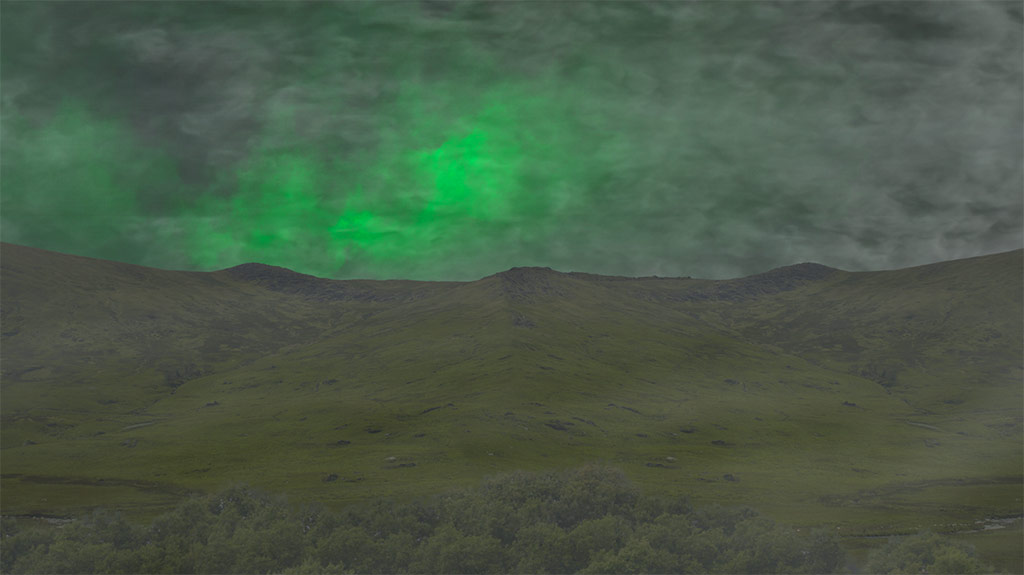 Speaking of ominous, an eerie storm glow is exactly what we need to make the scenery come to life and feel perilous. 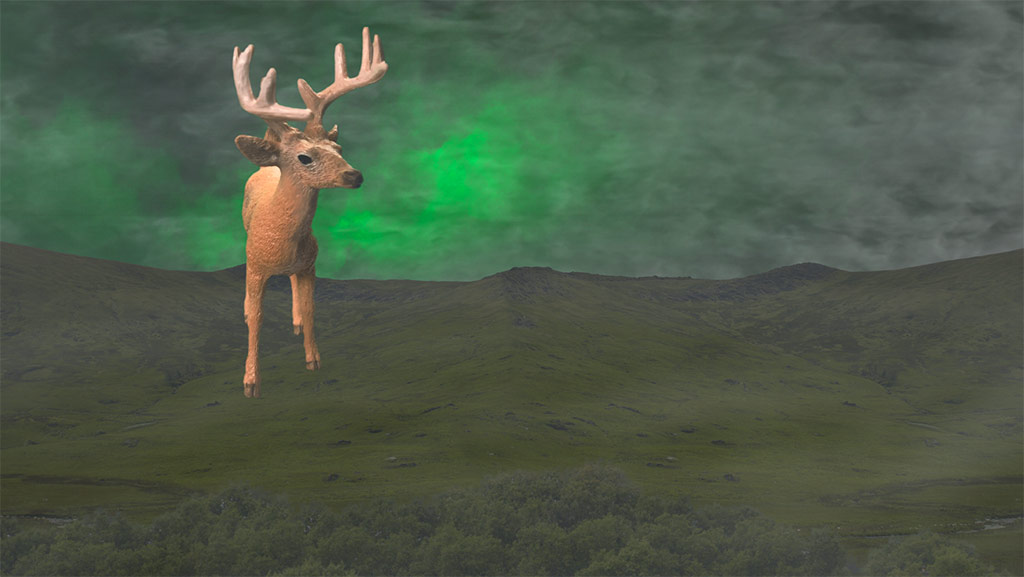 It’s time to add one of our actors. But why does Bambi stick out like a sore thumb? It looks like we need to work our movie magic. 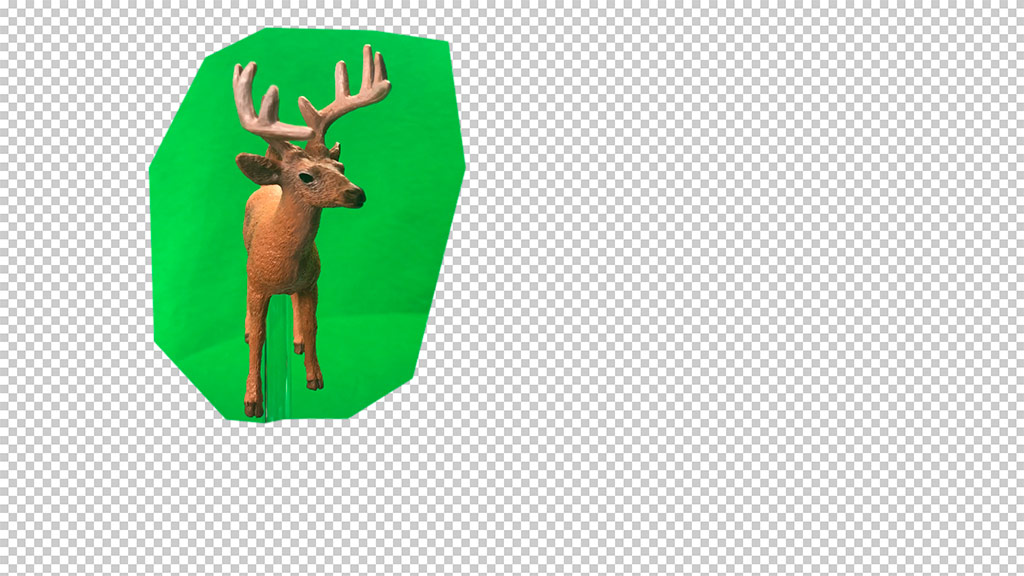 Before we work our movie magic, we need to breakdown how this was all done. I recorded Bambi on my iPhone X video camera. I stuck Bambi to a plastic pole, using putty to keep ‘em together. I used the pole to rotate my subject in front of the camera with a green screen in the background. It’s important to do this because it adds more dimensionality and flexibility to your subject. How do we remove the green screen?

To remove your green screen, there are different software out there that can get the job done. For me, Red Giant’s Primatte Keyer 6 is the best. Simply press Auto Define Key, revise the background and foreground layers (you’ll find the split screen option as an invaluable resource), adjust the matte blur and shrink matte, and **click on Spill Killer** (note: it’s at the very bottom of the scroll page and unfortunately, it’s not in my screen grab). 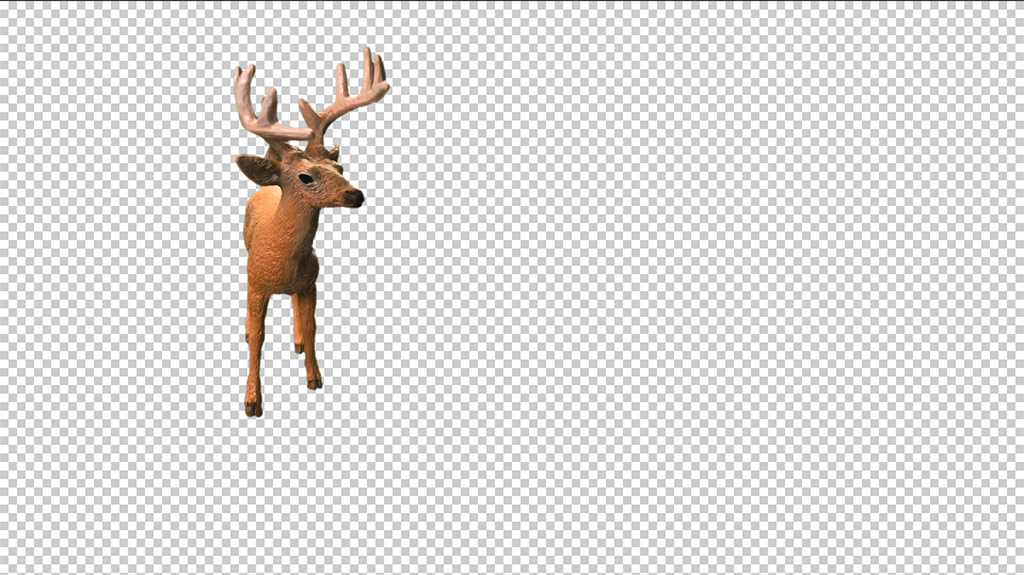 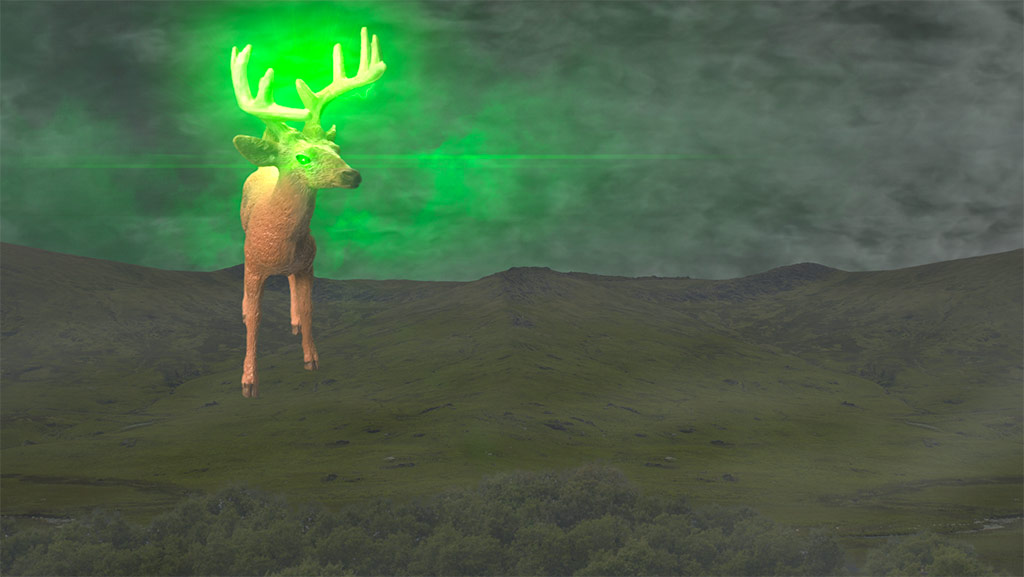 To make Bambi look more intimidating, I added an eerie green glow effect to Bambi’s antlers, with electricity zapping effects added in for more flare. I added a green optical flare to Bambi’s eye, keyed frame-by-frame to juxtapose with his rotating movements. 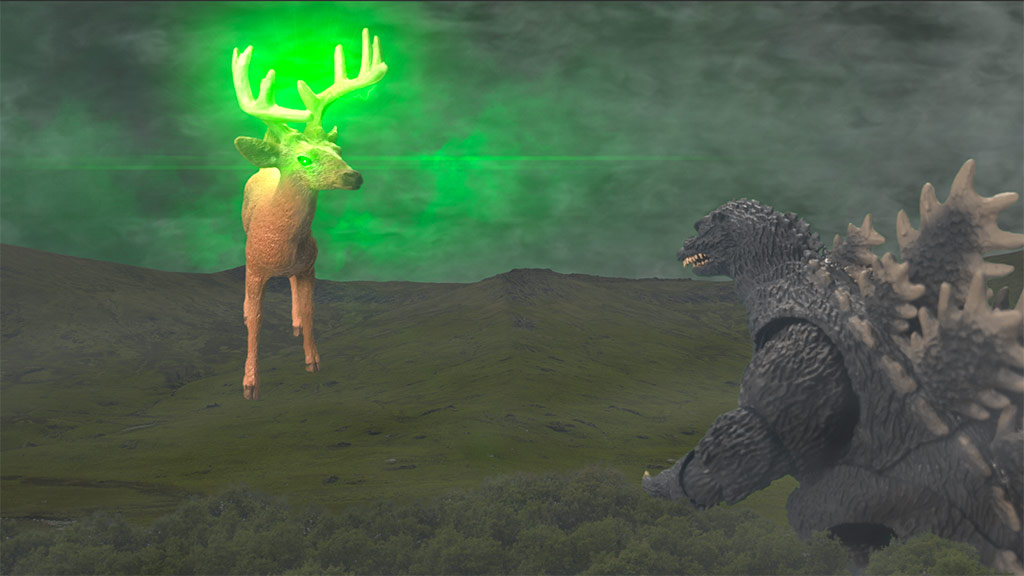 It’s time to add the King of the Monsters! 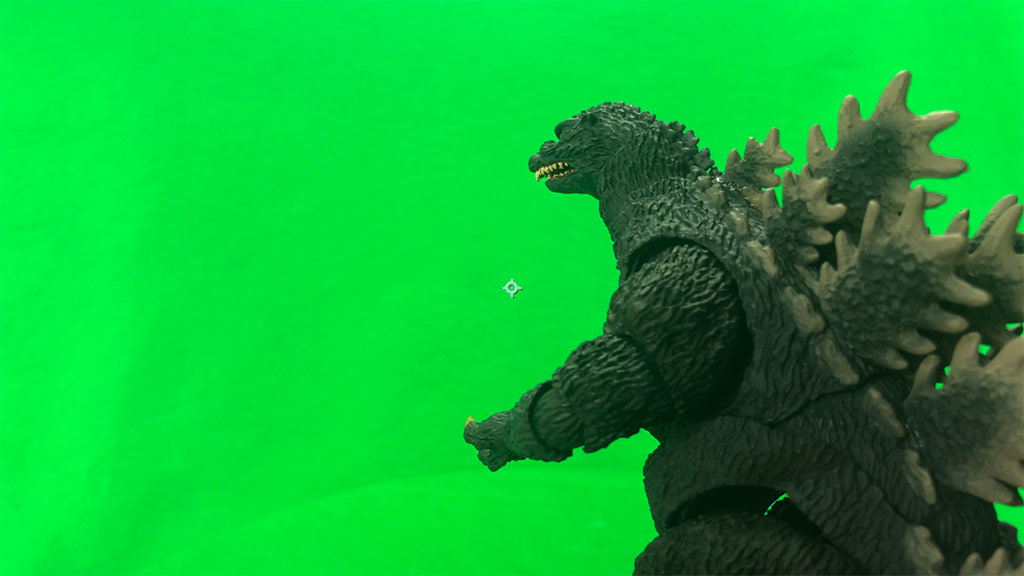 In this shot, I’m carefully moving Godzilla’s legs forward to simulate movement. While not stop motion per say, I felt it was the best way to execute this scene. 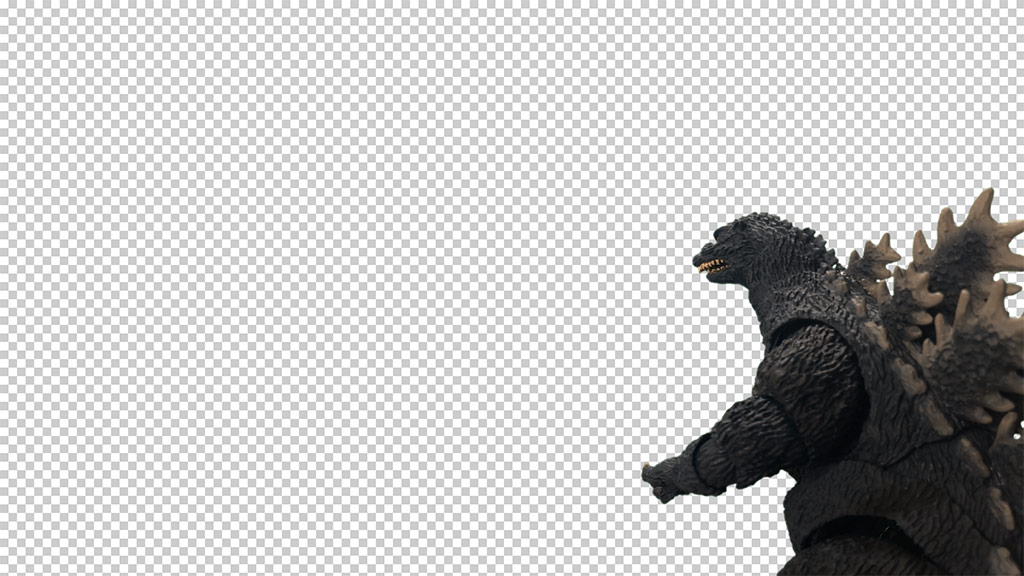 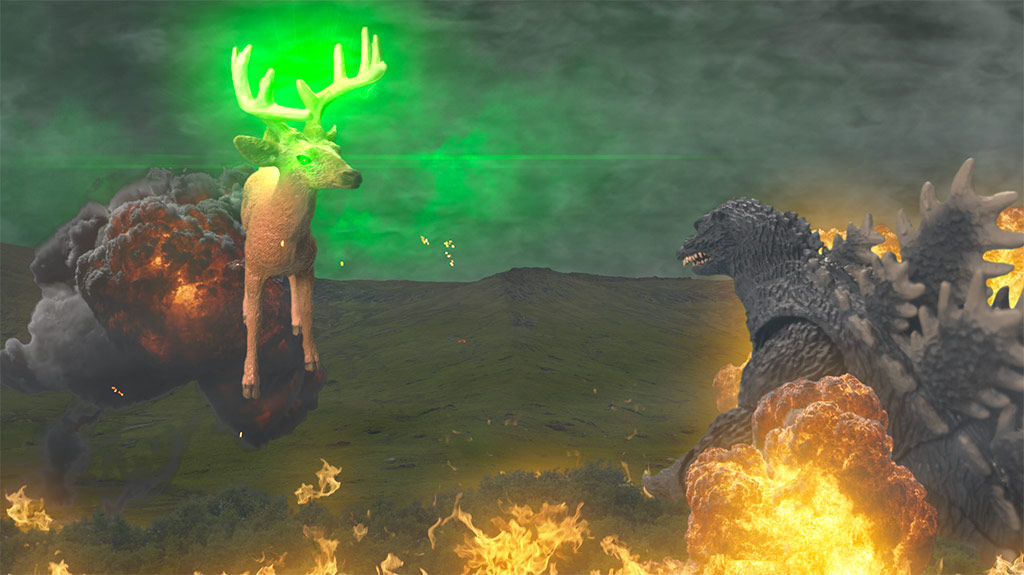 We need to raise the stakes. It’s time to introduce a little Bayhem (a phrase coined in honor of film director Michael Bay, known for his prominent use of explosions). The explosions add dynamic fluidity to the scene, adding a true sense of apocalyptic dread. Different explosive elements are used. Some placed in the foreground, others in the background. Each explosion has its own glow layer to really make it shine. Fire and ember effects have been added, too.

Uh, why does it look too…Photoshopy? Maybe this would’ve been cool a few decades ago. What can we do to give it a real thematic feel? Red Giant has exactly what we need. 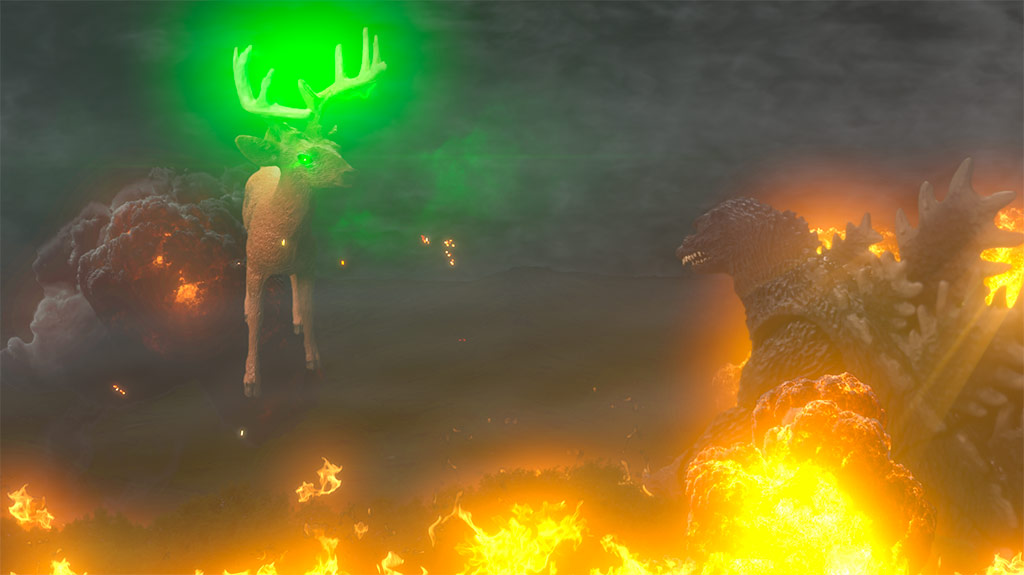 It’s called Supercomp. Don’t tell me wife, but it’s my true love in life. I mean, look at the light and shadow Godzilla’s body is casting! 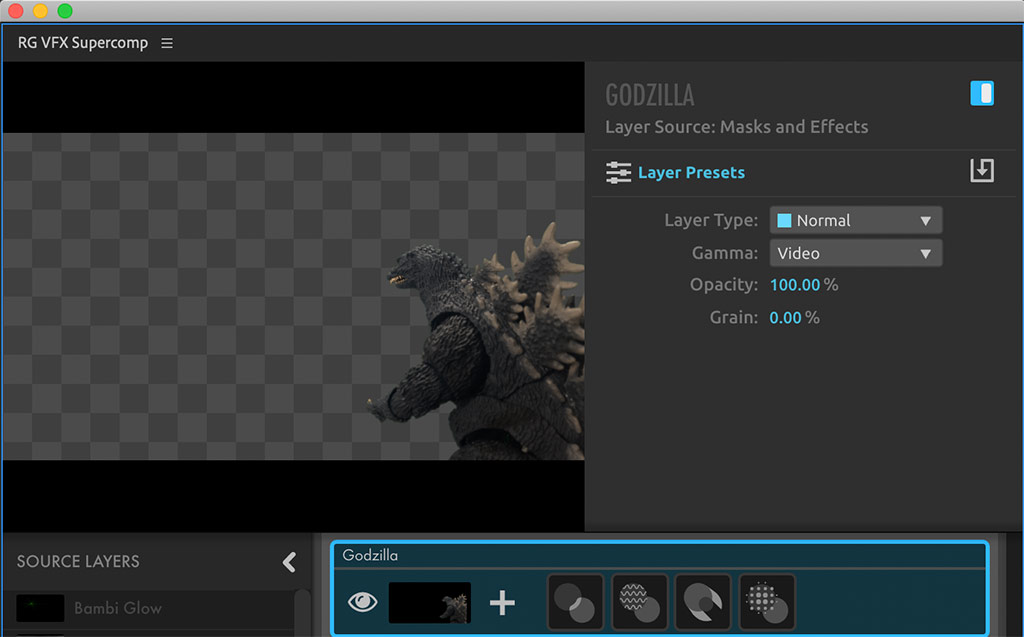 We need to explore Red Giant’s Supercomp more. We’ll use Godzilla as our subject. 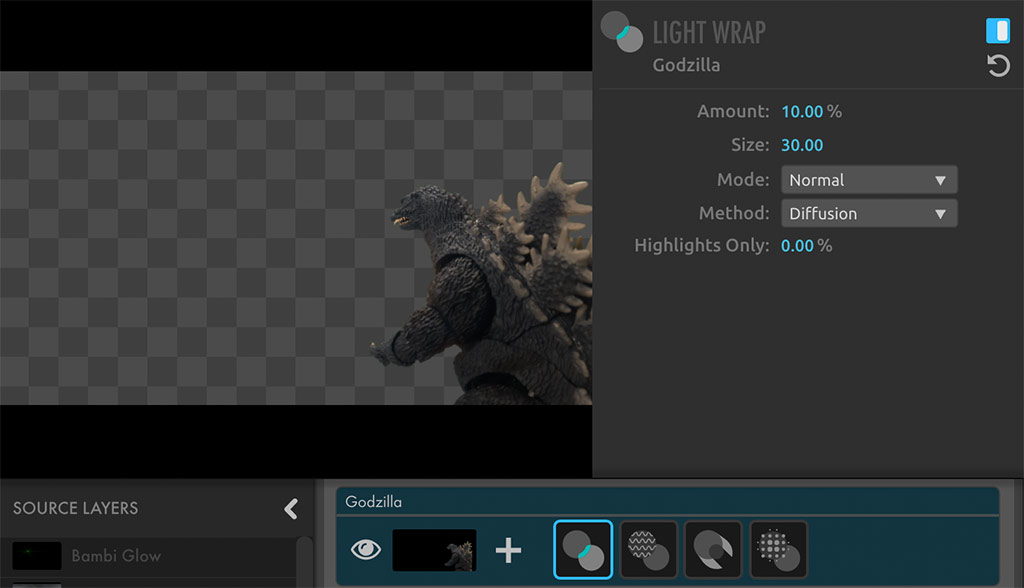 Light wrap is an invaluable tool. It does exactly what it sounds: It wraps light around the edges of your subject. In this shot it’s subtle but you can adjust its intensity if the environment is brighter.

Haze uses color elements from around the subject to great effect. 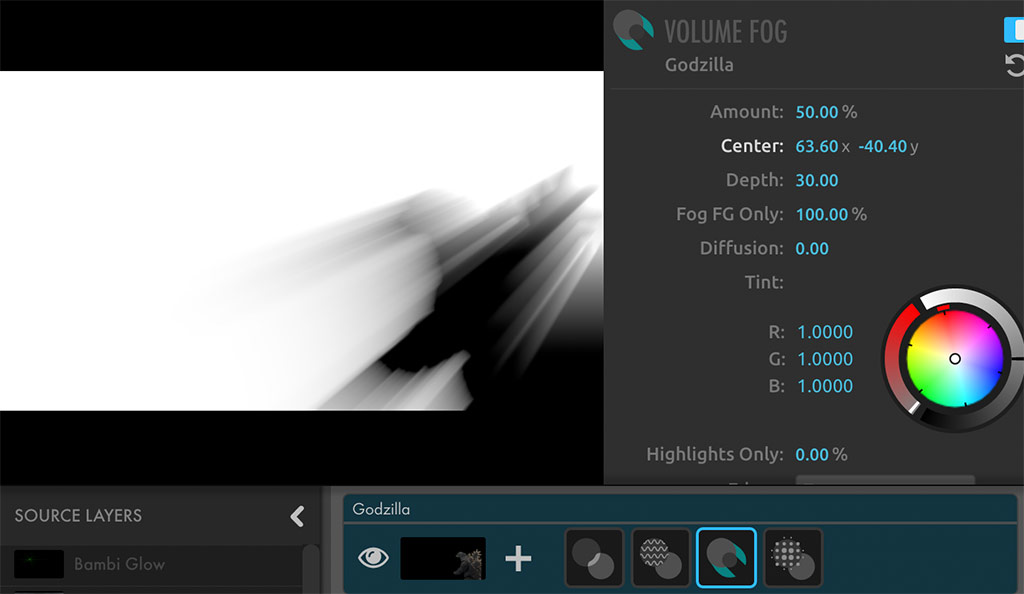 Volume fog is my personal favorite. Remember the light and shadows Godzilla’s body was casting? It’s all due to this amazing feature. Volume fog adds a true sense of mystique and depth to your subjects. 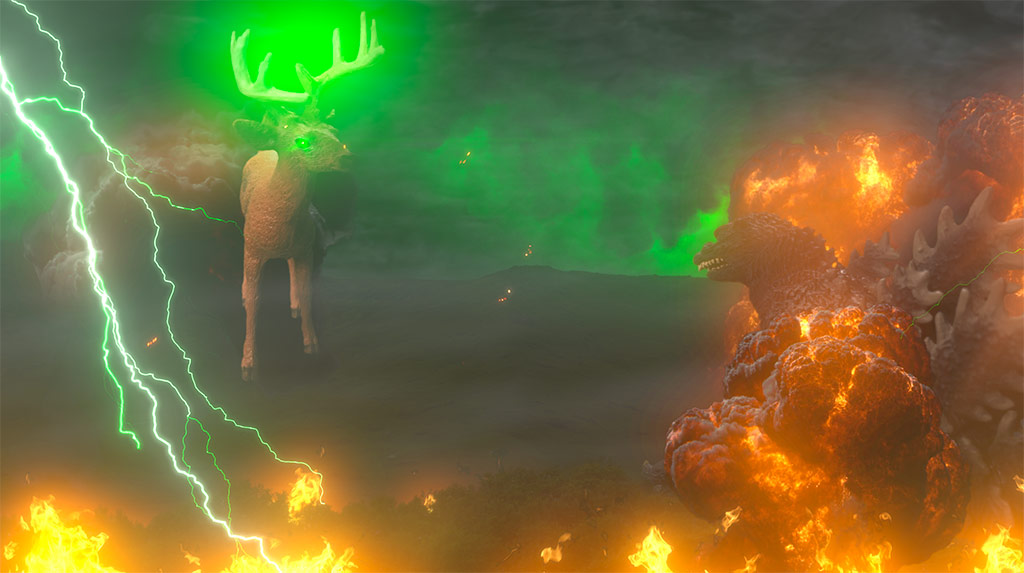 Since the world is ending, we need lightning. ActionVFX has a free lightning pack! Get yours today. But even with this addition, we’re missing something. 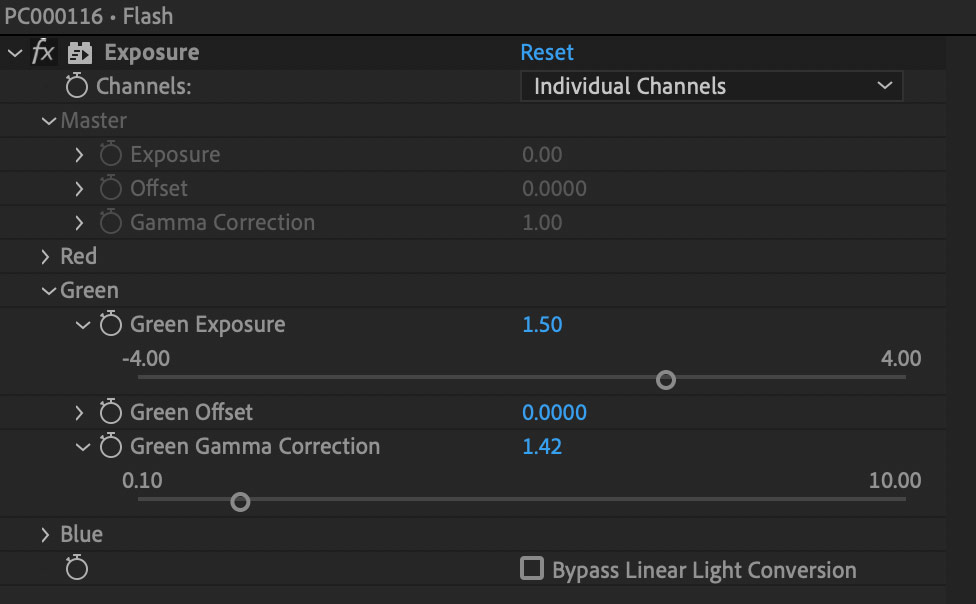 Make an adjustment layer and add Exposure. Select Individual Channels and focus on the green controls. We’re doing this because the lightning effect is green.

Why are we doing this? Well, see for yourself. 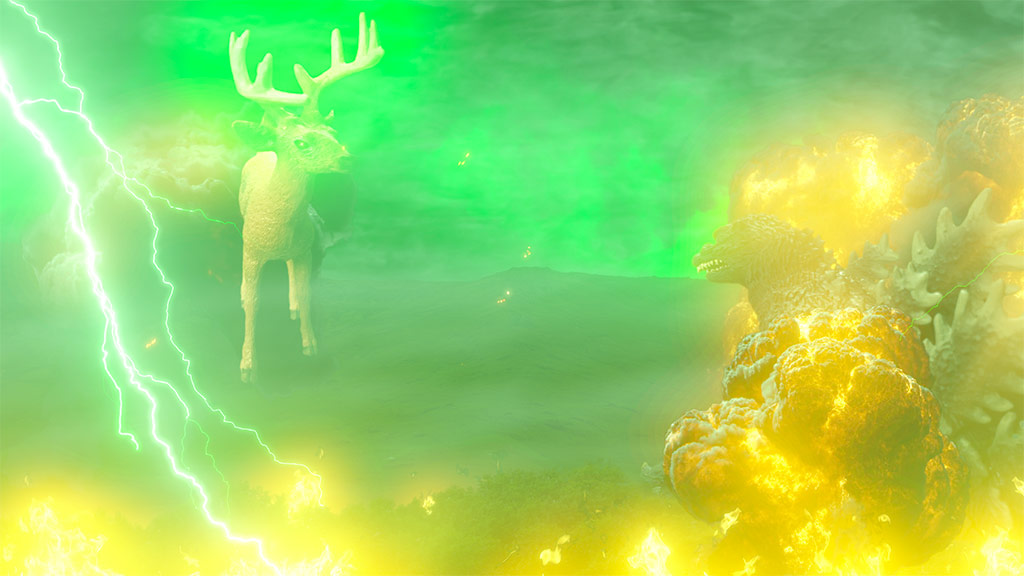 Make sure to adjust the opacity of your Lightning Flash effect. It’s fun to play around with. Now we have a nifty looking lightning flash. 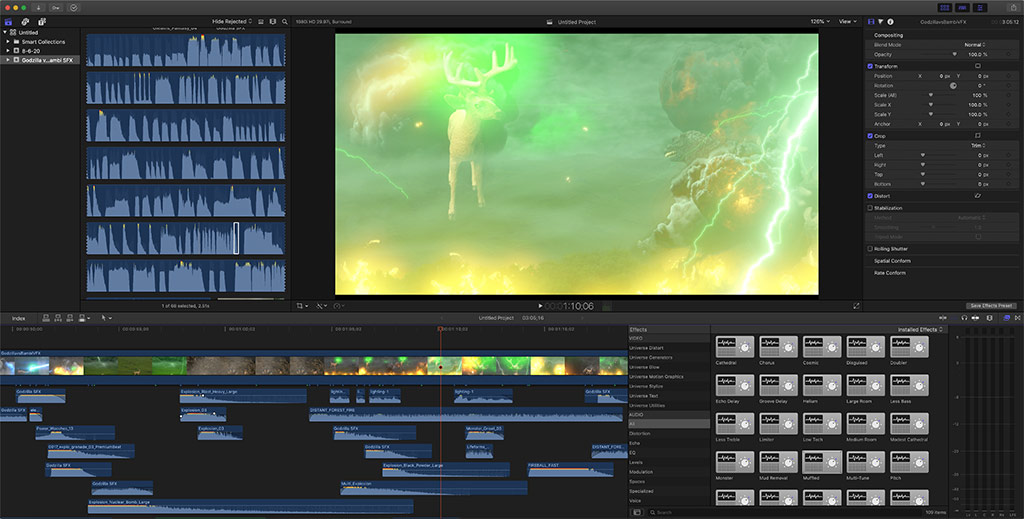 As post-production advances further, we come to Sound Design. I won’t be going into detail here. But as you can see, there’s a lot going on. Here’s a tip: Not everything needs a sound effect, as I’ve learned the hard way many times. 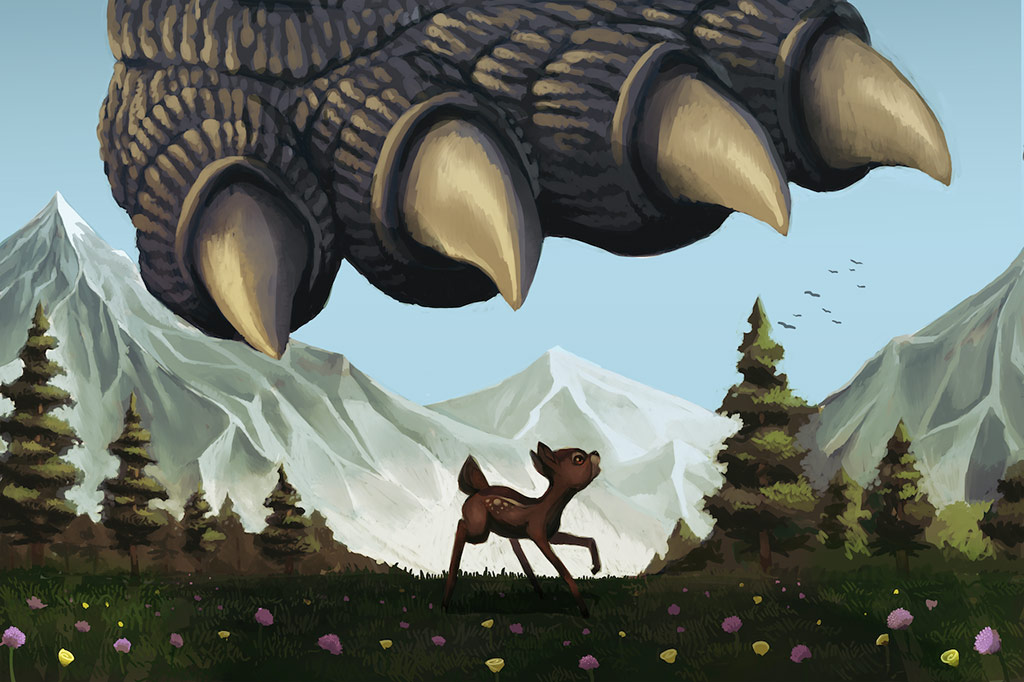 I wanted to do something special for this project. After saving money, I searched for an artist to design the movie poster. It didn’t take long for me to discover the perfect person for the job: Alex Alcanter. Alex was a complete professional. Before long, he delivered an illustration that was better than anything I could’ve imagined. He’s definitely someone I’m looking forward to working with in the near future and I can’t recommend him enough.

That wraps up today’s tutorial. If you have any questions, please email me or comment down below. Feel free to share your work! We’d love to see your videos. Godzillaspeed!