IDW Publishing continues their ongoing Godzilla comic saga with Godzilla: Rulers of Earth. This series lasted for 25 issues, from June 25th, 2013, to July 8th, 2015. This is actually a record for a comic series based on the King of the Monsters, besting the 24 issue run that Marvel comics achieved with the character back in the 1970’s. The long series also featured a host of Toho monsters, including some surprises at the time like Zilla and the Gargantuas: Sanda and Gaira. While the creative team shifted a little, most of the issues were done by writer Chris Mowry, who wrote the Hedorah vs. Mechagodzilla issue of Godzilla Legends #4, and artist Matt Frank, who did art duties on the Anguirus vs. Destoroyah issue of Godzilla Legends #1.

This news report is a roundup of the previews for this long series that were provided to Toho Kingdom from IDW Publishing. Click on an image to expand to the full page view. 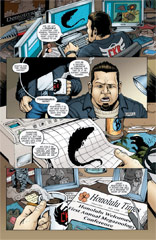 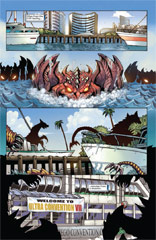 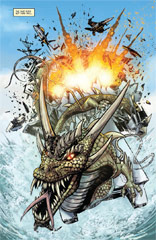 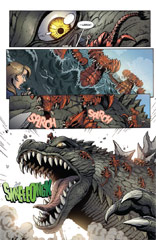 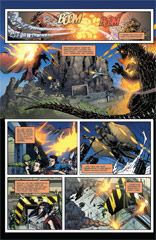 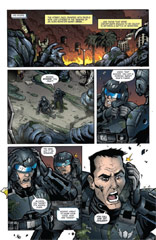 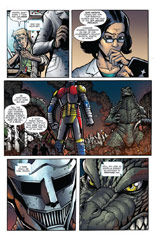 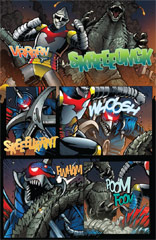 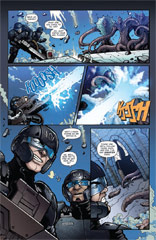 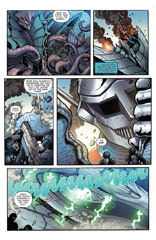 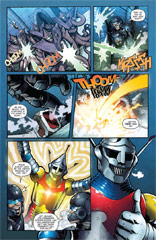 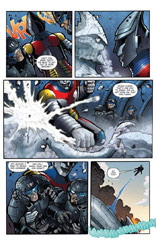 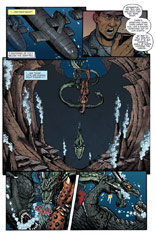 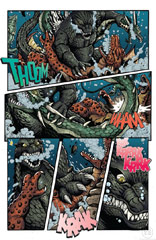 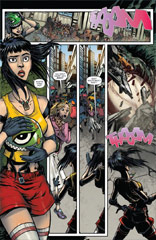 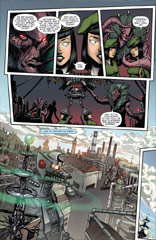 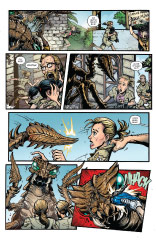 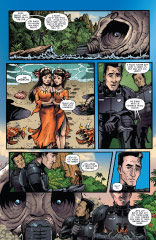 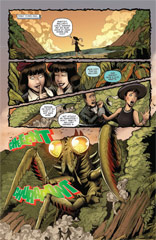 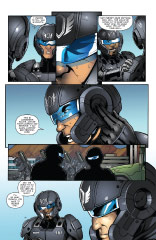 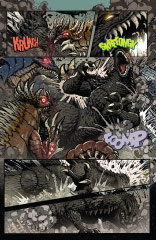 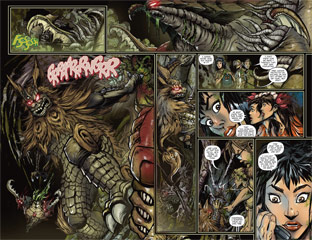 The series was first announced in March of 2013. It included the addition of a lot of new monsters to the comic run with the inclusion of  Biollante, Gorosaurus, Moguera, Zilla and Varan as confirmed picks when the news broke.

Series editor Bobby Curnow left a message about the series on the Toho Kingdom forums around this time:

“First off, Godzilla fans seem PSYCHED and that’s great to hear. We’ll need your enthusiasm, and support. Here’s why:

Chris and Matt are well-respected (beloved?) in G-fan circles. But here’s an important thing: they are virtual unknowns in the greater comic book community. If you’re a comic book shop owner, (i.e., the person responsible for ORDERING comics) you’re probably not going to recognize their names. Every other Godzilla book has been helmed by established comics pros. So this book is going to be a big unknown, and a gamble for many of the people ordering the books. So how well it will do is in question.

That’s the main reason you haven’t seen longer stories from Chris and Matt before now. In terms of sales, it’s a very risky proposition. I’ve spent the better part of a year trying to convince folks here at IDW that they can pull it off. And I sincerely believe they WILL. This book is going to be tons of fun.

But here’s the thing: We’ll need YOUR support like never before. This is a Godzilla book by fans, for fans. It will be up to you guys to support this book. It’s really important that you tell your local comic book shop directly to ORDER THIS book! Tell them specifically that YOU want to buy a copy (or three!). Spread the word to anyone you know who digs Godzilla— or just fun monster stories in general. We’ll provide ordering codes as time goes on, but for right now, just spreading the word is VERY important!

It’s awesome that everyone is excited, you SHOULD be! But at the same time, don’t take this book for granted. Don’t assume your comic book shop will have it! This series will last as long as the numbers support it. It’s in the readers hands!”

Below is the cover for the first issue, by Matt Frank along with the original press release in full.

San Diego, CA (March 13, 2013) – Following Duane Swierczynski and Simon Gane’s run on Godzilla, the fan-favorite creative team of writer Chris Mowry and artist Matt Frank have returned with a new ongoing series kicking off this June, GODZILLA®: RULERS OF EARTH! In the wake of humanity’s war on Godzilla, a host of new monsters will rise up, determined to stake claim on mankind’s greatest asset… the Earth itself!

“While we had a lot of fun with the Godzilla®: Legends series, they were just single issues,” said series writer Chris Mowry. “What we’re doing with this series is giving readers that same focus on monsters that Legends had, while telling stories set in IDW’s established Godzilla universe. Readers can look forward to the return of some of our human cast and the introduction of a number of new ones, but the monster roster is larger than it has ever been, using nearly all of Toho’s film creations to give readers battles never before seen. Many of these monsters having never appeared in the comic book/manga medium, so who better to change that but monster artist extraordinaire, Matt Frank?”

“Whether it be Moguera, Biollante, or Gorosaurus, every Toho fanatic has their own favorite monster,” said series Editor Bobby Curnow. “Now it’s time to see these kaiju in action, and RULERS OF EARTH won’t fail to deliver the goods. It’s been a blast to watch Chris and Matt bring their passion to the page.”

In RULERS OF EARTH, the entire world is opened up to the flying, stomping, smashing terror that can only come from the gnashing fangs, slashing claws, and otherworldly powers of destruction that these giant monsters wield. What will Godzilla do when he’s suddenly not the only giant lizard in our small pond?

The only way to find out is to pick up the gargantuan thrills of GODZILLA®: RULERS OF EARTH when issue #1 crushes comic shops everywhere this June! Not only will RULERS OF EARTH be sporting covers by series artist Matt Frank, but Godzilla fanatics will also be able to find smashing covers by Bob Eggleton and comics legend Arthur Adams!