I have never really been a fan of overpriced chocolate. When I happen to visit a Godiva chocolate store (say, for one of their delicious chocolate shakes), the prices on their boxes of chocolate are positively terrifying—almost, but not quite, enough to kill my appetite. So it’s kind of ironic that I plunked down the huge chunk of change required to purchase the Godzilla Poster Collection chocolates—2700 yen?!!?? And, as with most (probably all) of the Valentine’s Day Godzilla chocolates, with the Godzilla Poster Collection Chocolate set you are mostly paying for the packaging… but in this case, gosh, the packaging is really flipping cool!

The cool inside front cover!

Once again provided by the fine folks at Hunter Confectionery, the box itself (on the outside) has the now-familiar “Godzilla Chocolate” ribbon and strange silvery military design, but this time the top of the box also features a huge footprint (I believe from the Shin Godzilla promo a few years back), and a list of 29 different years—the release years for the first 29 Godzilla films.

The reason that the box features those release years is simple enough—inside, there are 30 square chocolates, and on those 30 chocolates are individual wrappers that feature the posters for all 30 Godzilla films released up to this point! (Why “2017” is not listed on the box is anyone’s guess—maybe it wouldn’t fit?). The posters often don’t fit very well on the wrappers, and thus the images for the posters wrap around the top and bottom of the chocolates… but once you unwrap the chocolates, the posters can be viewed more effectively, and the hungry chocolate muncher can also read the back of the wrapper, which features the sequential number of the film released, as well as its Japanese title. The unwrapped poster wrapper looks really spiffy, and I am tempted to stick some of them up around my apartment or office so I can happily squint at them all day. If I had a doll house or, say, Castle Grayskull or Krang’s Technodrome playset, these posters would look great plastered to the plastic walls while my action figures fought out their frustrations alongside.

And… wow, look at that square… Godzilla chocolate.

But what about the chocolates themselves? Well, again, we have some—rather high quality—milk chocolate here. This time the chocolate itself bears no Godzilla design at all, but rather a generic pattern running diagonally across the choco-squares that looks more like the impressions of tires than anything. I chowed down on two different Godzilla choco-squares—the original Godzilla (1954) square, and the Ebirah, Horror from the Deep (1966) square. Regardless of how you feel about the quality of those two movies (I happen to like Ebirah a lot), the quality of the chocolate is the same—pretty dang yummy. But still… when I pay beaucoup bucks (or should I say a yuge amount of yen?) on some chocolate, I kind of expect more than just… milk chocolate, no matter how good it is.

But again, what you are paying for in this case is not so much the chocolate and much more the packaging—this time especially the wildly cool wrapping paper on the chocolates! The box is also spifferific, with the inside lid printed with a shimmery promotional still from the original Godzilla film. Still, you should only buy this admittedly impressive box of chocolates if you have a serious jonesing for mini-posters, because otherwise, honey, it just ain’t worth it.

The most expensive—and the coolest—chocolate wrappers ever made! 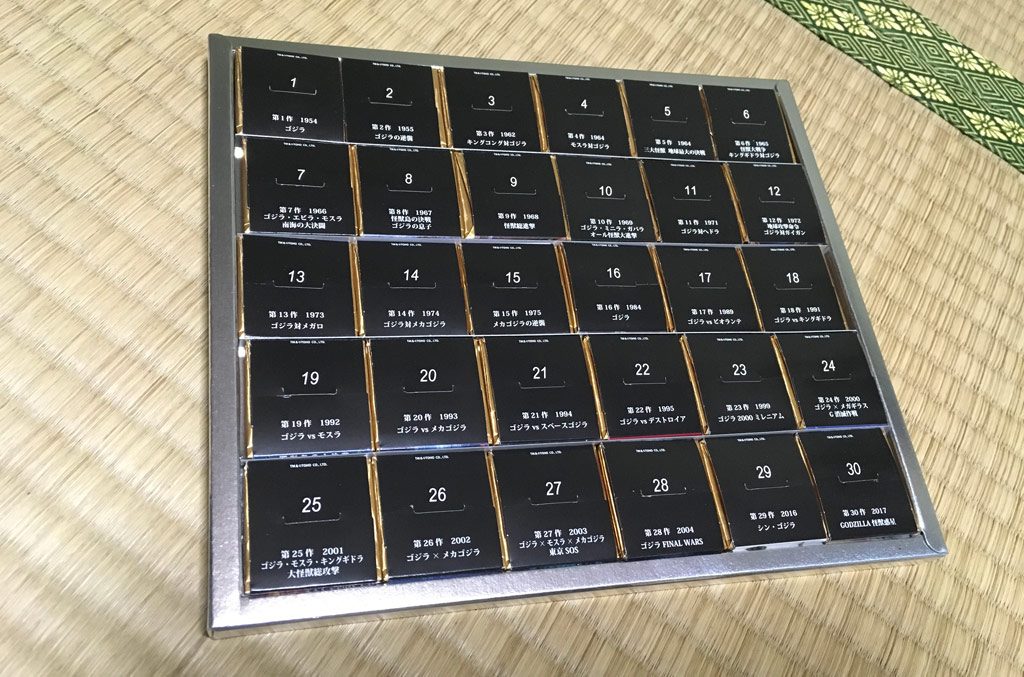 Flipping cool! The other side has the titles and sequential numbers!