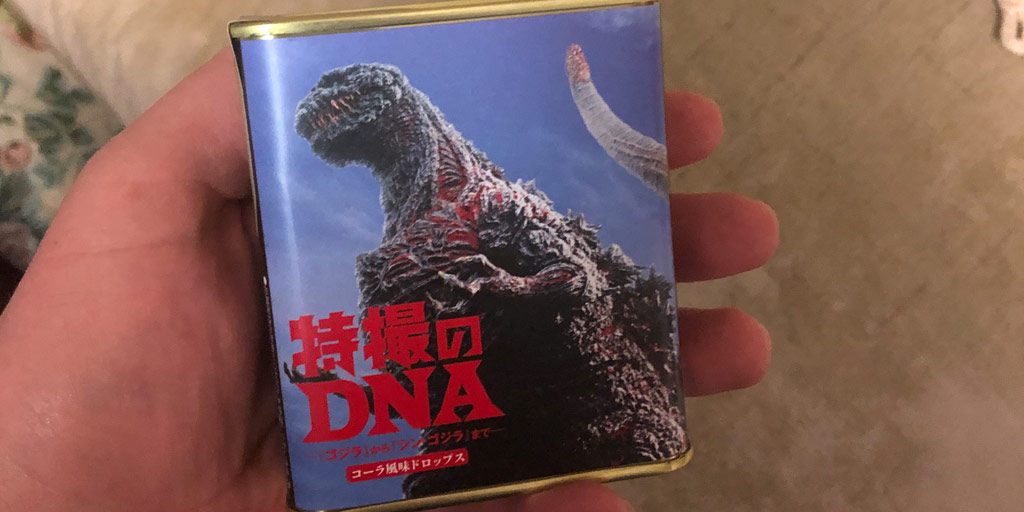 Tokusatsu no DNA: From Godzilla to Shin Godzilla Cola Flavor Drops: this is another one of those Godzilla-related snacks that I can’t help but kind of puzzle over a little bit. I picked it up at the Tokusatsu no DNA exhibit back in January (along with the Godzilla Honey Pie and a few other things), and I just have to kind of wonder: Why cola? At least with, say, the arare crackers we have a snack that originates from Japan. At least with the Godzilla curries, we have something spicy that sort of goes along well with Godzilla’s nuclear breath (and, as I love to mention over and again, curry was the source of Godzilla’s fiery breath back in the Japanese version of the Godzilla Game Boy game). At least with pies you can say it’s part of the omiyage/souvenir culture. But cola drops, along with fruit-flavored chocolate bars and chocolate wafers, really puzzles me.

Not saying they are bad. Just puzzling. (Turns out the chocolate wafers sold with collectible cards are pretty common.)

As usual, let’s start with the packaging. Here we have a metal rectangular can (the same style as the candy fruit drops you may recall from Ghibli’s Tombstone for Fireflies), this time with images of Shin Godzilla on the outside. On one side we have the much-overused leering Shin Godzilla with his hands curled and his nasty ribcage and so on, while on the other side we get an extreme close-up of Kamata Kun’s face.

Alright, sure, if you think those images are appetizing, I don’t really agree, but sure.

The worst part of the packaging is the circular lid on top which fits into a hole to close the can up. The problem is that it’s hard to open—the sort of lid that is liable to break your fingernails if you aren’t careful. When I was sharing the drops with friends back home, I really struggled with that lid, and even after bringing the blasted thing back to Japan with me, I try to be careful when I replace the lid lest I push too hard and make it into the Excalibur of candy dispenser lids.

But okay, what about the candy? My friends and I agreed: It’s good. I am not much for cola candies (though over the last few years my fondness of Coca-Cola has unfortunately grown), and I rarely eat hard candies of any kind, but these have a solid flavor which makes the entire process of melting the thing down on my tongue a taste-tacular experience. When I pop one into my mouth, it kind of reminds me of pop rocks, except much milder. This may be just my imagination, but the candy, for me, does have a sort of effervescent taste which adds to the experience.

The Godzilla cola drops are a fine diversion for fans of the giant monster, and yet another rather successful confection from Sawarabi STK (which also made things like the Print Cookies and the Godzilla Pie). While I don’t think this one is going to be available all over given that it was an exhibit exclusive, if you can get your mitts on it, it’s genuinely tasty. Good times.