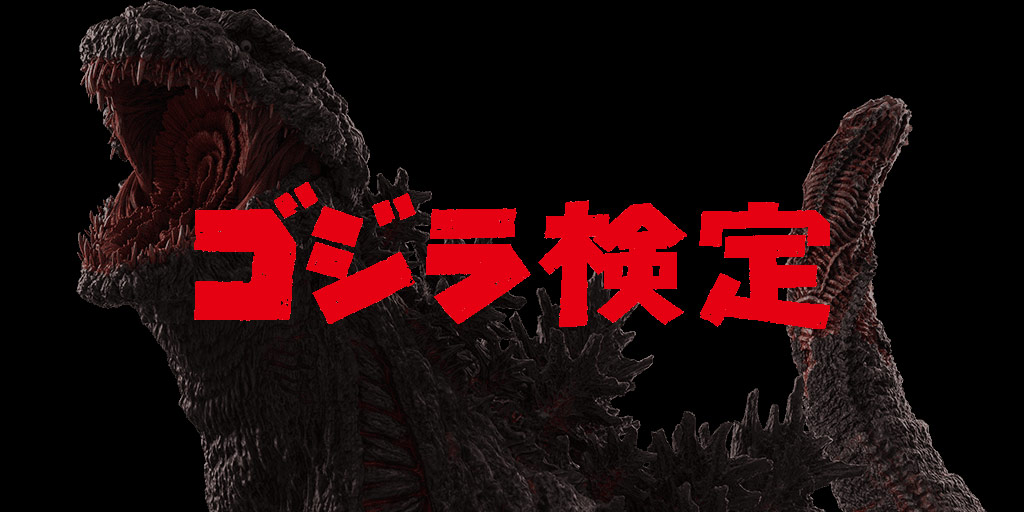 I have done a lot of really nerdy stuff for Toho Kingdom, and it’s kind of difficult to categorize what the “nerdiest” articles or projects might have been. Writing lots of book reviews is arguably really nerdy; writing about Godzilla’s love life is nerdy AND embarrassing; spending over a hundred bucks on Godzilla Valentine’s Day candy just to review them for the site is nerdy, embarrassing, and almost seems emblematic of the stereotype of an obsessed otaku who can’t get a date. I don’t just do embarrassing stuff for my fandom—I spend lots of money, then spend lots of time writing about it, and then post about it WITH MY REAL NAME on the Internet.

But even I kept asking myself why I had spent 9500 yen to take a test on Godzilla knowledge. No, scratch that—two tests. Each an hour long, both on the same day. In Japanese, yet. I mean, who DOES this stuff?

Actually, quite a few people, as I found out. 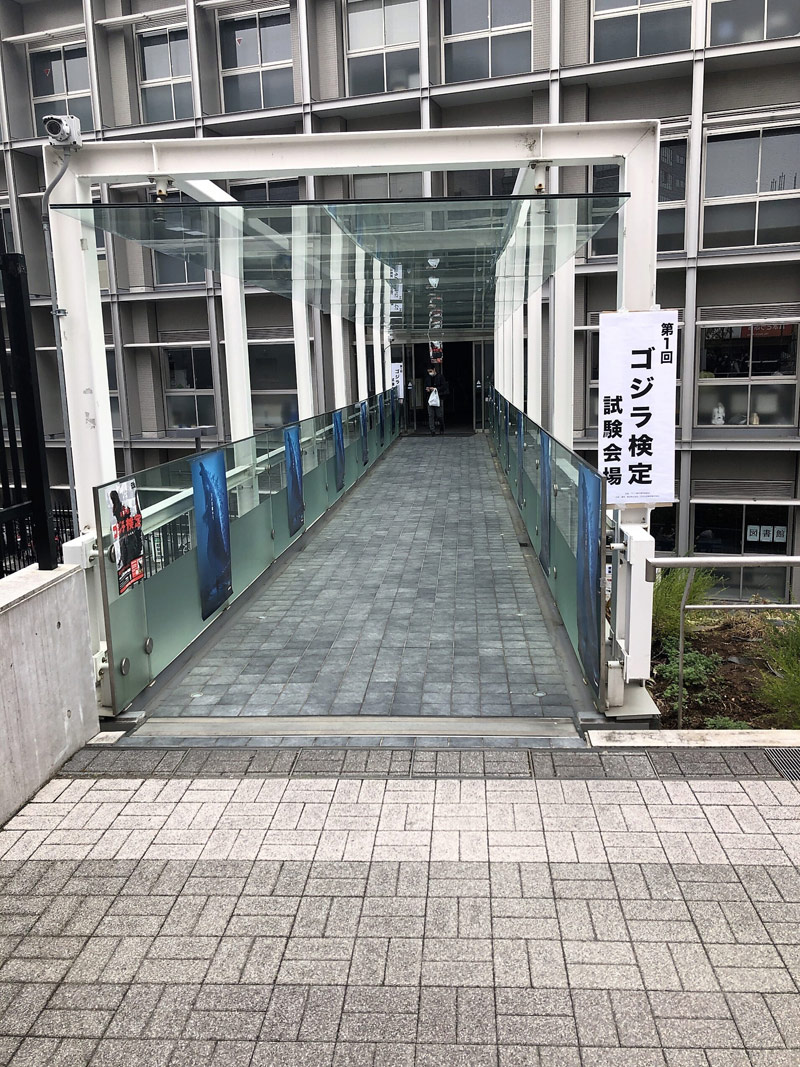 So I took the first-ever Godzilla Kentei—the Godzilla Certification Exam. I spent the cash, got the papers, got the study book (and even studied it for about a half an hour or so), and went to the Tokyo site (fans in Osaka could go there instead) to see how much Godzilla knowledge I had up in my head. The Tokyo site was at the Takanawa campus of Tokai University. Having experience with the Japanese Language Proficiency Test, I had a pretty good idea of what to expect… The assigned seat, the assigned number, the rule that we have to put away our stuff during the test, the long explanations, etc. As anticipated, I was the only white guy there, at least that I saw. But there were a lot of things I didn’t really expect.

For one thing… well, lots of people were there. Mostly men, but I saw a few women taking the test. (For once, during the break, the men’s rooms each had a long line, and the women had no wait at all.) I didn’t really think very many people would take the test, since the certification doesn’t really mean much, and people can take Godzilla quizzes online for free. I also expected more kids, but I saw fewer children than I saw women. For many test-takers, maybe it was the merch that lured them—the lines for merch were intense, but I just didn’t really care to buy another T-shirt and “clear file” and pin. 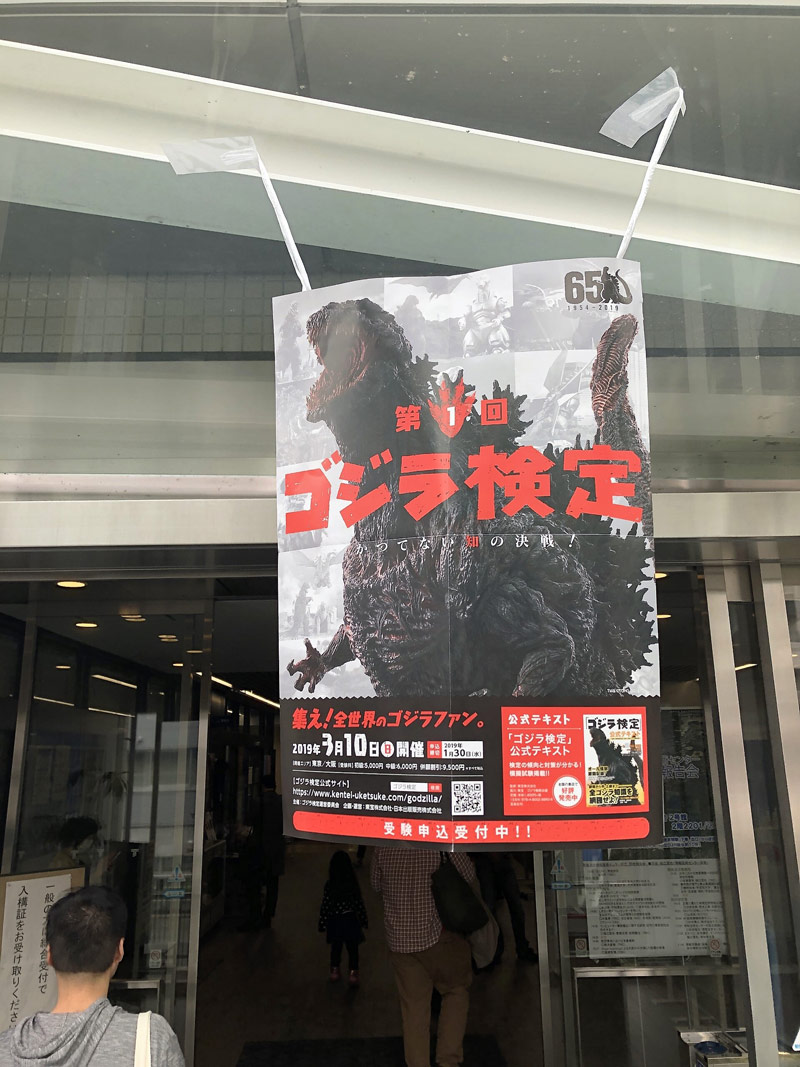 The Godzilla Certification Exam—Beginner AND Intermediate

I took both tests, but I thought there would be different crowds taking the beginner’s and the intermediate tests. However, in my room, the test-takers were virtually the same for both tests. I guess everybody else had the same idea as me—they figured this was their one big chance and they wanted to show how much they know. And it’s kind of fun, too.

So how hard were the tests? Well, first of all, they were both in Japanese, obviously. Some questions had a little English (one question was about the acronym for MOGERA used in Godzilla vs. Space Godzilla), but the test was designed for native Japanese speakers. I had to fully rely on my Japanese, and usually I could figure out the questions. Even with my somewhat poor Japanese, I had little problem finishing the first test within the time limit, though I had just a few minutes to spare on the intermediate test.

The test questions were all multiple choice—just fill in the correct oval. The questions were not broken up into different question types really—it’s not like the JLPT with its grammar section, listening section, reading section, and so on. The questions of the Godzilla Kentei are sort of mixed together. Some of the questions had pictures in the test booklet, and these questions were usually about putting particular monsters in the order in which they grew or evolved—like the Mothra caterpillar, cocoon, and imago (I know, that one is super easy). However, the exam items with pictures were just mixed at random with the other question types. There didn’t seem to be a lot of rhyme or reason to the exam format.

Many, many of the questions (with their exact wordings) were included in the study book, which I bought and studied briefly. I sort of wanted to see how far I could get with my own Godzilla knowledge, though, and was too lazy to study much. That choice would come back to bite me later. 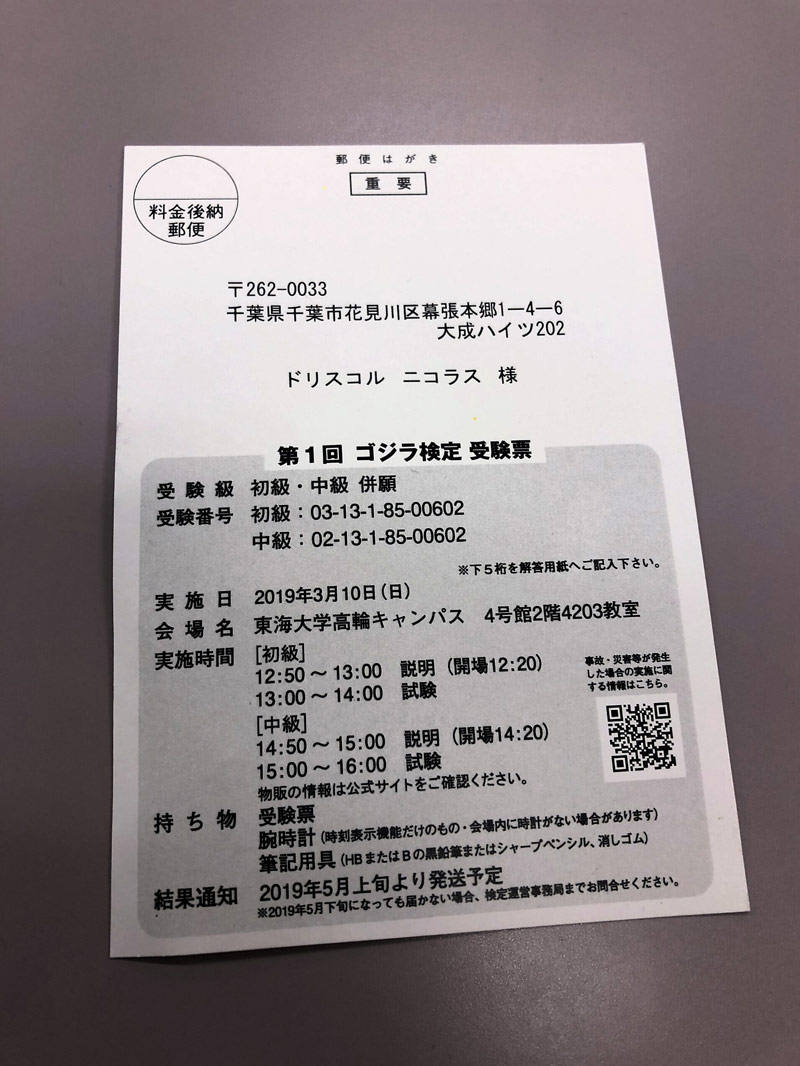 The questions pretty much exclusively focused on the movies—not the comics or shows. In both tests there was a heavy focus on Godzilla Resurgence and the original 1954 film, with Resurgence getting a lot of obnoxious (for me) questions such as where in Tokyo certain events took place (I just couldn’t remember). Nevertheless, both tests included questions about virtually all of the Japan-made Godzilla films… except for the recent anime trilogy. Not one question (out of two hundred) was about the anime films, nor the American films. Some questions in the study book were about the anime and American films, but the actual test did not feature them—the closest the test got to featuring a question about an American film was an image of Zilla from Final Wars in one of the picture items.

A LOT of the questions were quite easy for me. Stuff like which specific monsters appeared in which movies, or the name of the evil organization in Ebirah, or how many films had Mechagodzilla in them, or even how many necks King Ghidorah has. Much more difficult for me were some of the questions about particular actors, many of which were from Resurgence again—and I just don’t know the names of most of the actors in that film. Some questions featured a lot of kanji, too, though usually the test included furigana above any kanji used. 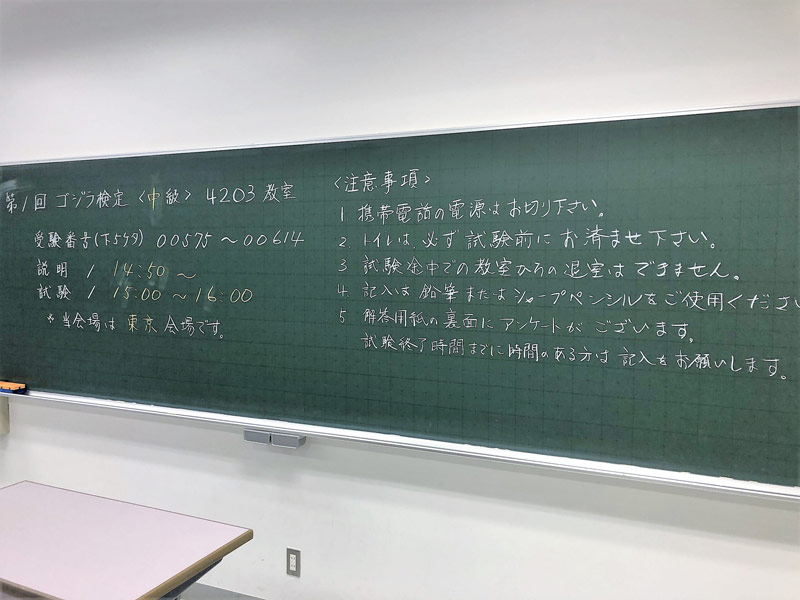 I liked the questions that tended to go a little more obscure, and was really pleased to see a question about Shukra and Mamagon from Godzilla vs. Gigan. The second test had a lot more of the somewhat obscure questions, or questions that just took longer to answer as I was trying to count movies (such as “what was the twentieth movie in the Japanese Godzilla films?”). One question that caught me off guard in the beginner’s test was about the year the original Godzilla was released in Japan—but calculated according to the Japanese calendar. I think I got it by calculating from my birth year (the Showa year for which I have memorized), but at first I was afraid I was a goner on that one. One strategy I used that proved especially helpful was to glance through my booklet at the intermediate level questions before starting the second test and quickly memorizing the right answer. Many of those questions I had quickly memorized were on the test, and so it helped me a lot… That decision probably actually enabled me to pass the test! 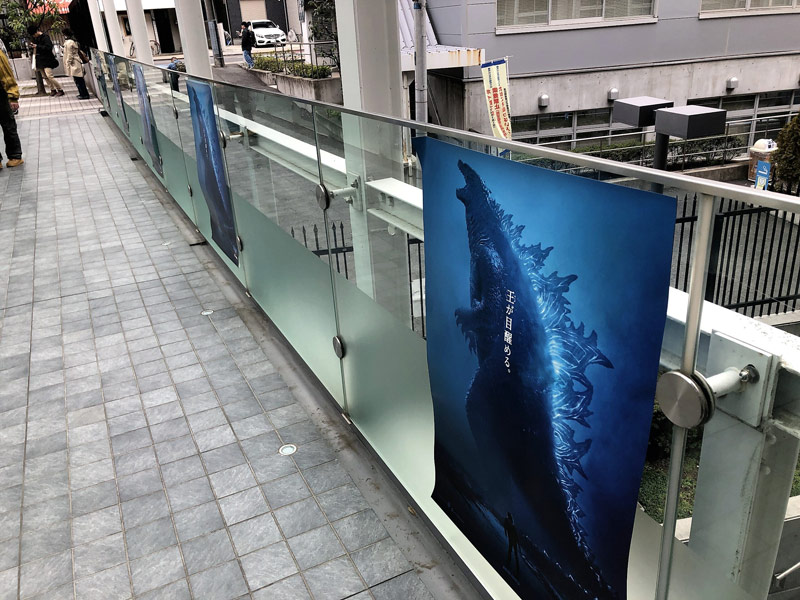 And as much as I had second thoughts about paying for and taking the exams, it was kind of exciting to be able to sit down and take a test in Godzilla of all things. So often in school we have to take tests on subjects we aren’t especially excited about, and so it was quite a bit more fun to tackle something that I love—and doing it in Japanese, with a lot of real Japanese fans, and to STILL finish both exams with time to spare without much study prep was pretty satisfying. Hearing the fans chat with each other about questions they thought they got wrong, or lamenting that they just couldn’t remember during the test, was a lot of fun.

I also met a guy at the test spot who was wearing a Godzilla hat made from balloons. He claimed he had made the balloon hat himself. I took a picture of him, and then he offered to let me wear the hat, and he took pictures of me. He was super nice! 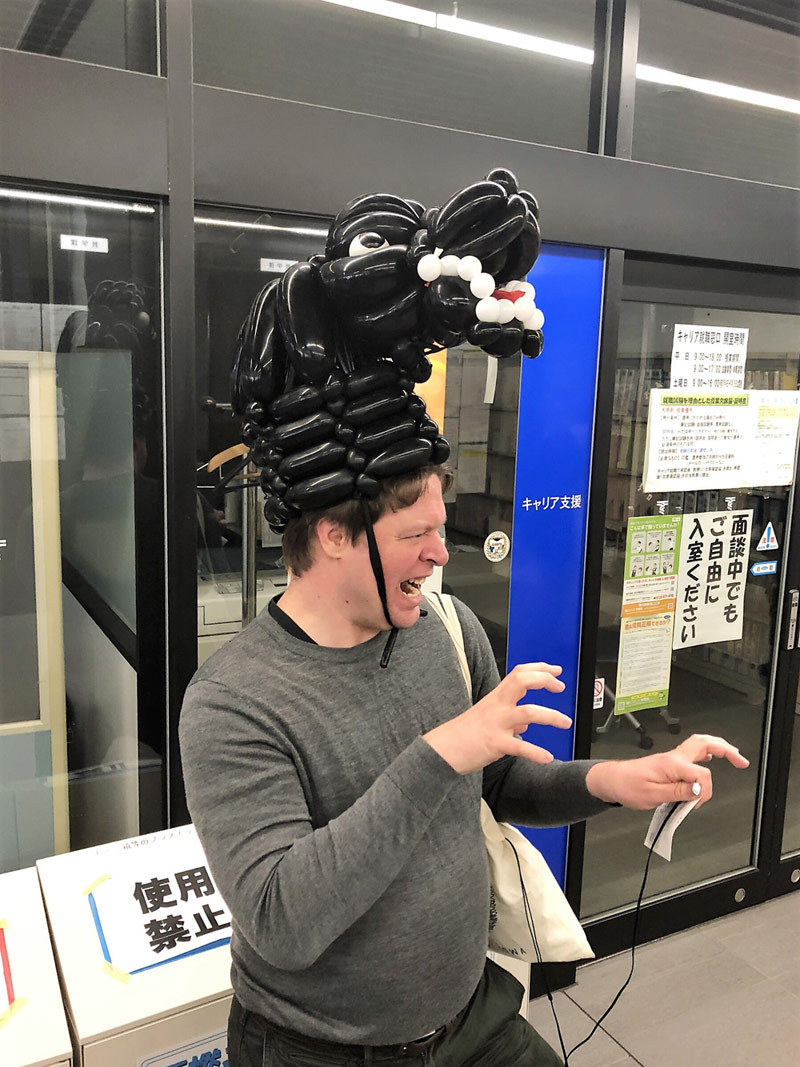 Some time later, I received the results. I passed the beginner test with an 87, and the intermediate (the certificate says “advance”) with just a 71. In other words, I almost failed the intermediate one, because the cut-off was at 70 points!

So yes, the Godzilla Certification Exam was arguably a big waste of money really, and was… kind of pointless. The exam doesn’t really test Godzilla knowledge well, since it is so focused on the 2016 film and the test can be aced by just trying to remember the questions in the test prep book. But honestly I had fun, and the experience was quite unique. This year they had a beginner and intermediate test, but the book also had questions for an advanced test, though with the caveat that there may never be one. I kind of hope that there will be one—and that they will give some kind of a prize to those who get a perfect score! 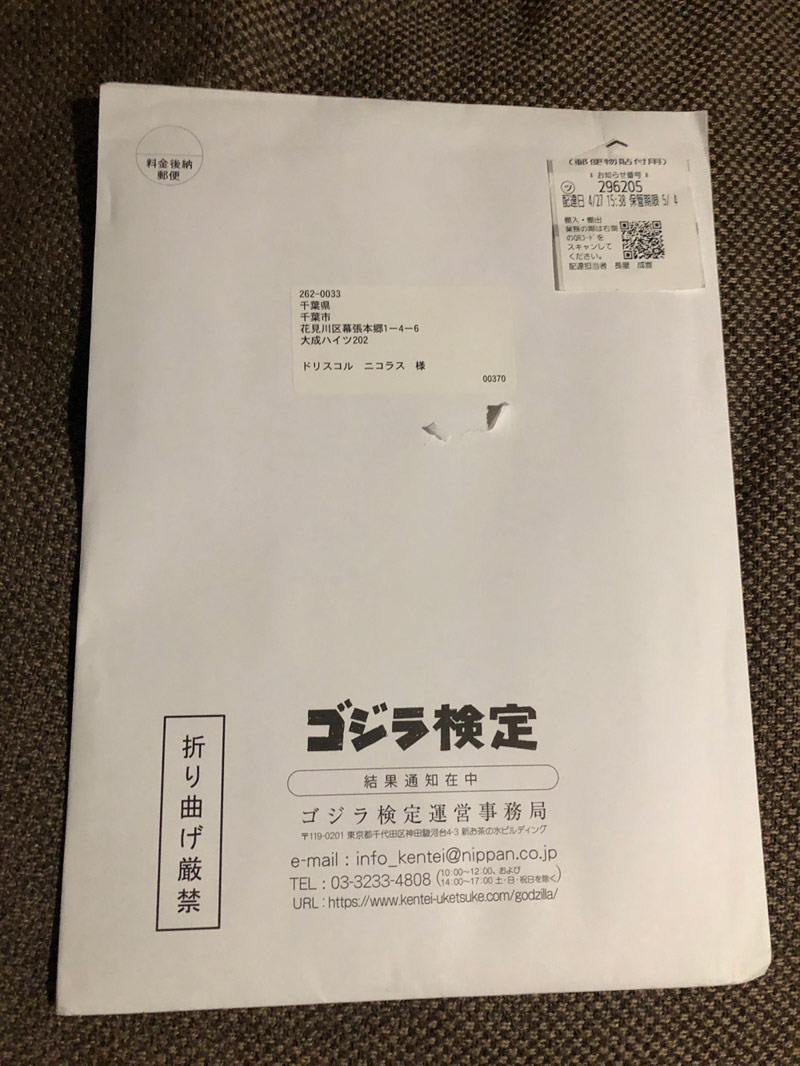 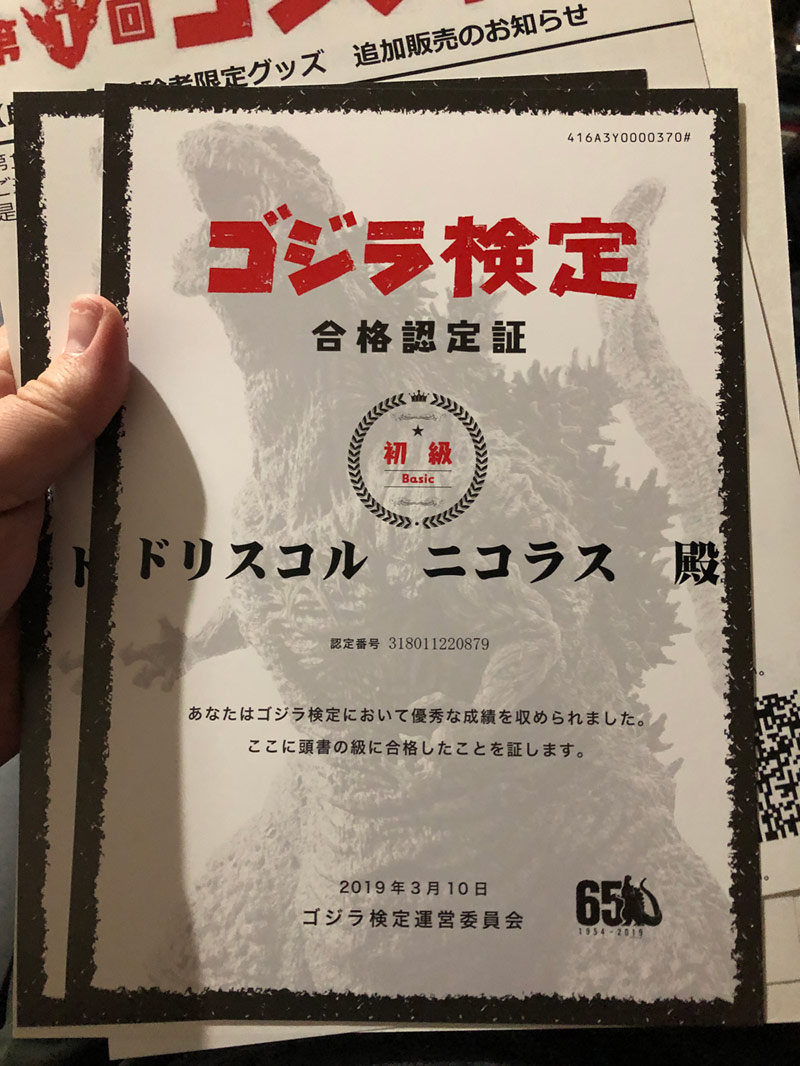 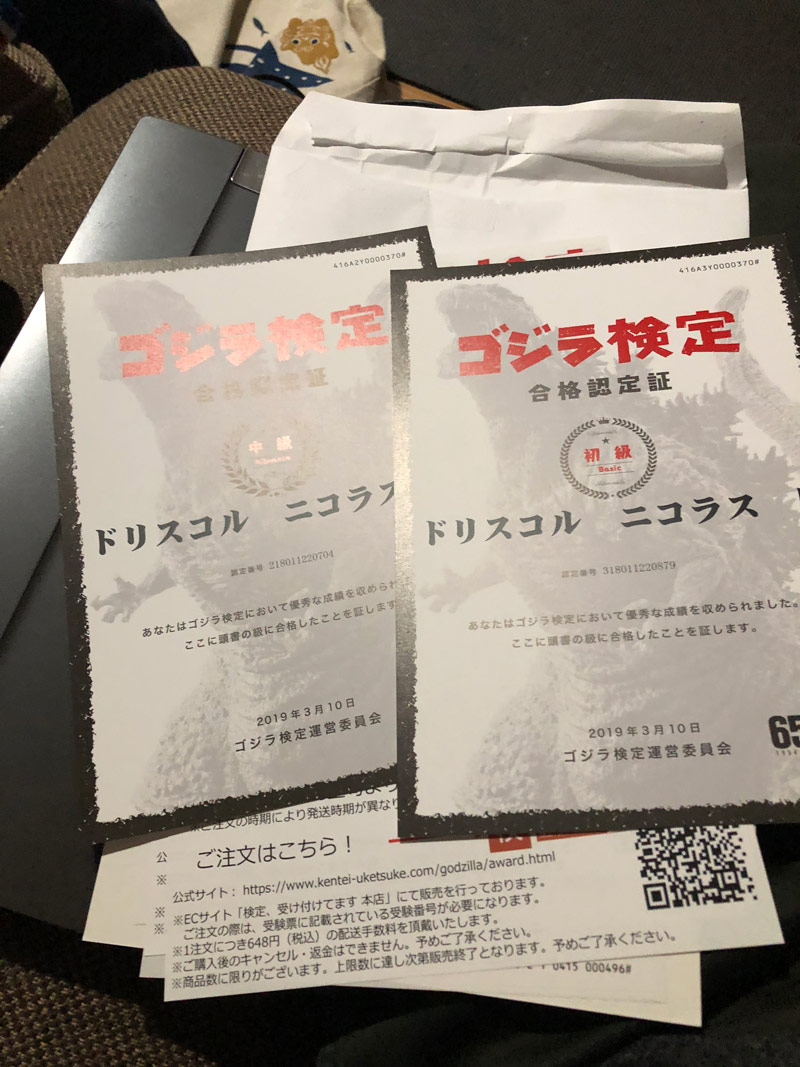