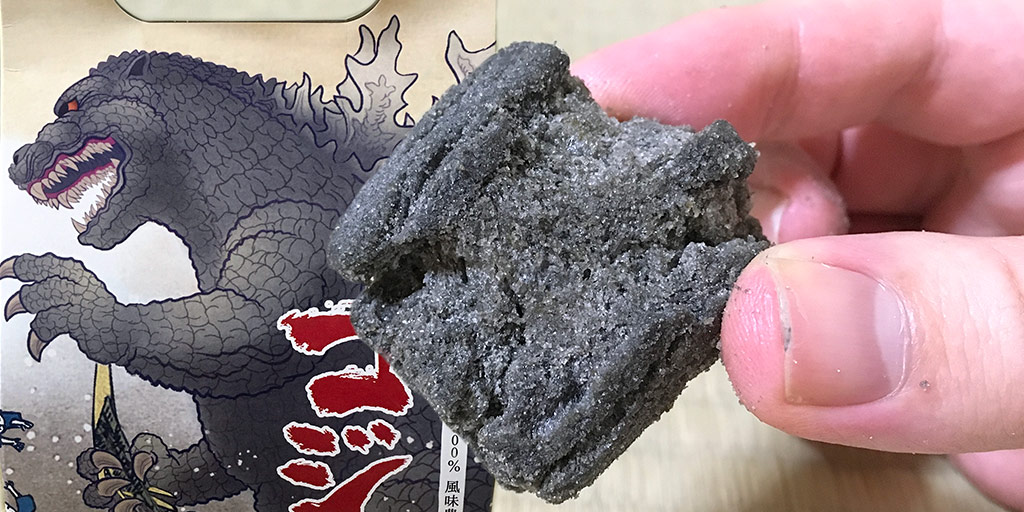 This year I have been something of a glutton for Godzilla and kaiju related snacks and foods, but in general I haven’t been very impressed with most of the offerings. I didn’t care for the Shin Gojiramen snacks from the Oyatsu Company, nor the Limited Edition Yaki, and while the Yokosuka Godzilla Curry was better, I don’t care to eat it again. I actually enjoyed the Godzilla Butamen, but it has already disappeared from the market. I picked up the Godzilla Arare Crackers (ゴジあられ) from a company called Folcart when I visited a Godzilla exhibit back in August of 2016, but given the underwhelming flavors featured in other Goji-snacks so far, I wasn’t exactly scrambling to eat the stuff until I noticed that they were going to expire tomorrow (November 1)! Thus I partook with haste, and boy this might be my favorite Godzilla food yet!

The packaging makes an immediate positive impression with Godzilla taking out some old-time Japanese fishermen in the midst of a huge wave, evoking the famous woodblock print by Hokusai (the art here mimics his, and seen at the end of the review). The whole milieu looks fantastic, so it may come as little surprise that I bought a t-shirt at the exhibit that features the same art. Given that As of this writing Godzilla recently visited ancient Japan in a particularly memorable IDW comic by Matt Frank, the art here feels especially serendipitous,

As for the crackers themselves, they are arare crackers, which means roasted glutinous rice cakes. The ingredients listed on the side include glutinous rice, bamboo ash (!!!!), vegetable oil, and salt. The package proudly proclaims that the crackers are made to look like Godzilla and are delicious to boot, and the usage of bamboo ash in the product is especially highlighted–and I have to say it intrigued me! The individual crackers look something like Godzilla cells, which presumably was the intention.

But what about the taste, my man? Well, I love glutinous rice, and these arare cracker have a fantastic texture and a crackling good crunch. The subtle taste of rice cracker is ever so slightly enhanced by a smudge of smoky taste and just the right touch of salt. I really love these crackers, and I wish I had bought everything more than one bag!

If all Godzilla snacks could be this good I would probably be the size of Godzilla now from eating them all day, so I guess I should be thankful that Folcart’s crackers are the exception rather than the rule. Still, if you like Japanese snacks and you are crazy about Godzilla, you would be remiss to pass these crackers up if you should happen to stumble upon them like I did! 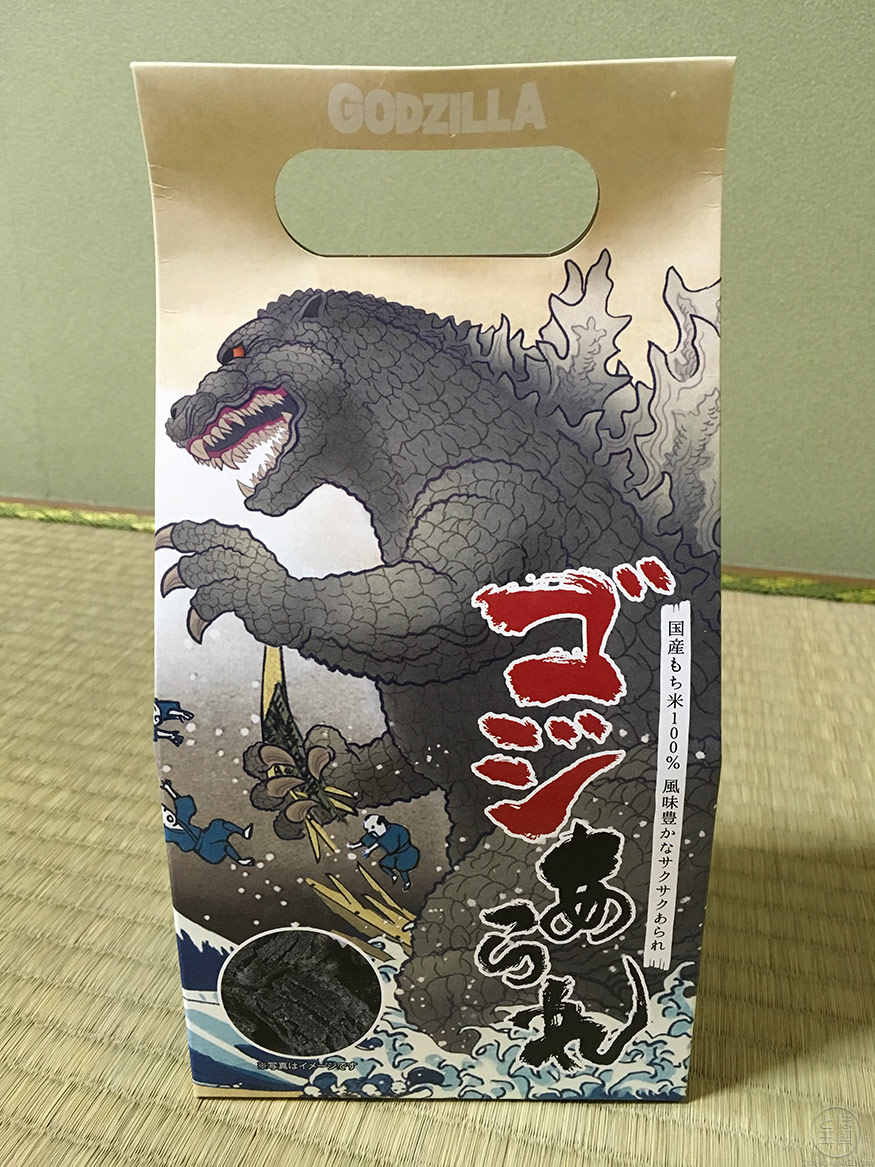 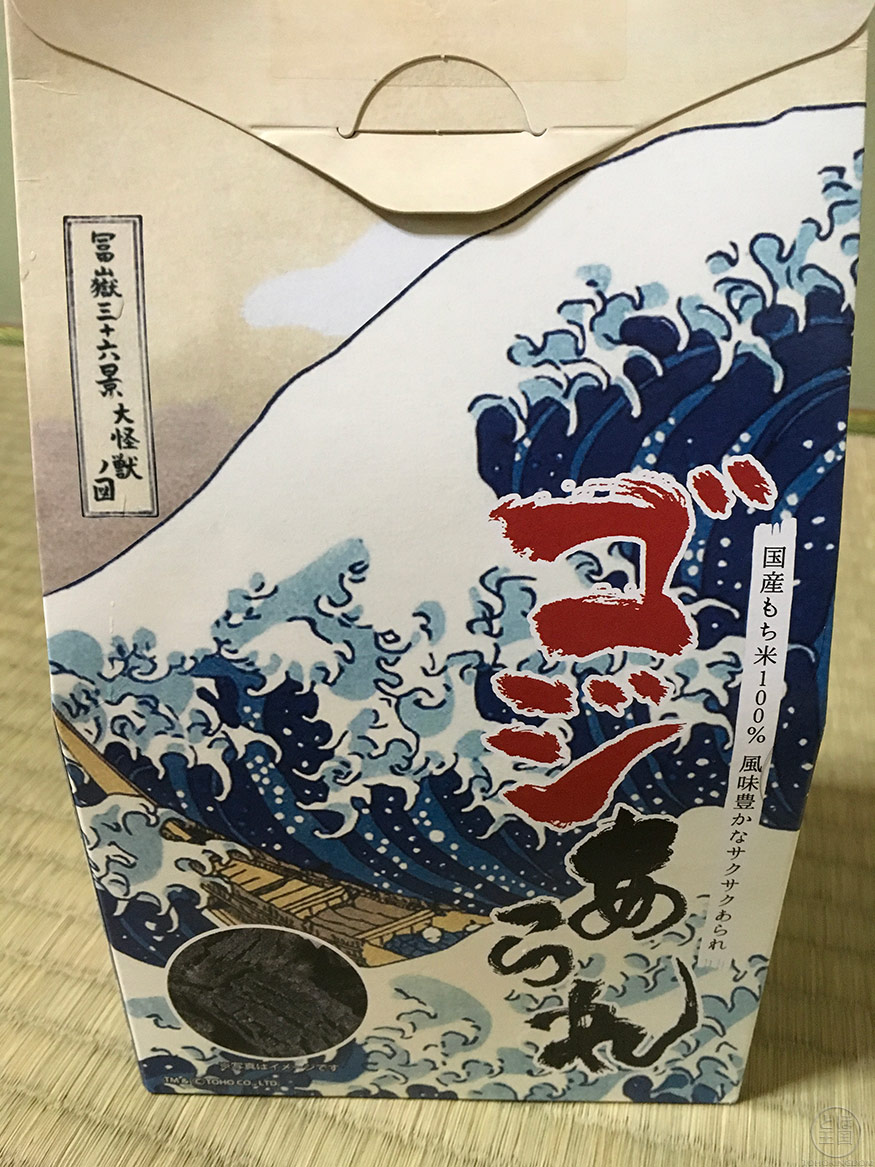