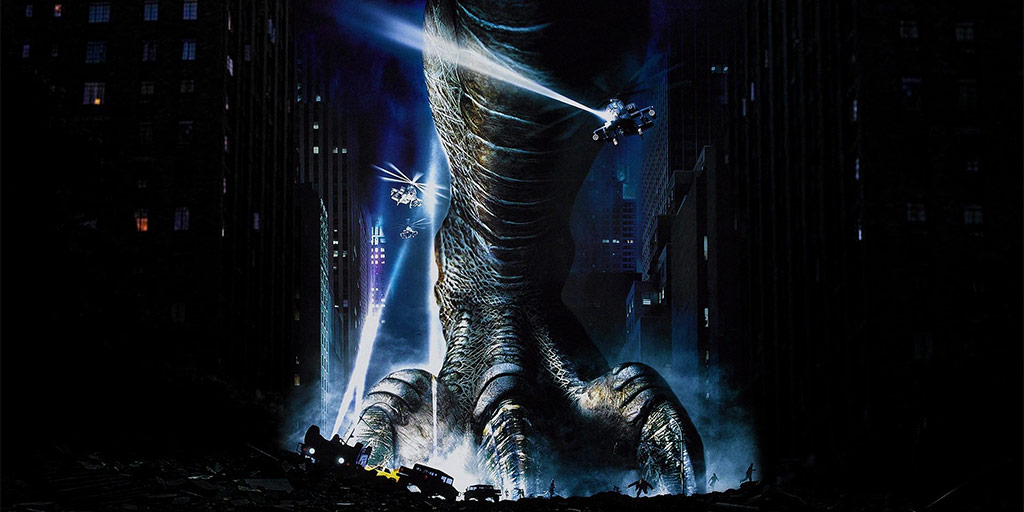 Let’s take care of the elephant in the room right away. I like GODZILLA 1998. Yes as a Godzilla fan I could make a minute by minute commentary with everything wrong with the film. Godzilla is too weak. Godzilla should breathe radioactive fire. Godzilla never runs from a fight. But what can I say? I was the target demographic for the film when it came out. I remember the ads, the young adult novel, my first Godzilla toy was a Trendmasters Godzilla 1998 figure. It’s a massive part of my childhood and its because of that movie that I was introduced to Godzilla proper.

As both an avid Godzilla fan and reader, I have been buying and reading as many books featuring Godzilla as I can. Most of them have already been covered in great reviews on our site including the one I want to talk about today in a manner of speaking. The original print book has been reviewed by site staff member Nicholas Driscoll, but I’m reviewing what up till now is still the only Godzilla audio book ever published. GODZILLA by Stephen Molstad is an audio book adaptation of the novelization of the 1998 film of the same name. So far the audio book has only been released once on two audio cassettes in 1998 and hasn’t been seen on any other format.

Most of the original novel is presented as being written by Matthew Broderick’s character Niko Tatopoulos who is writing his perspective on the film’s events following Godzilla’s death.This format is a fairly unique one that has yet to be used in any other Godzilla novels. It allows for a few extra details and ideas that are not found in the film. For instance the end of the book continues past Godzilla’s death and presents a “where are they now?” wrap up to the film’s characters. That being said the few new ideas contained in the novel do not alter the film’s story to any degree and will not change anyone’s feelings on the movie for good or for ill.

The audio book itself is an abridged version of the novel which I find to be incredibly frustrating. I love audio books and have always hated abridged ones. If I’m too lazy to read or listen to the full story why even bother with a slightly shorter take? I’ve never understood this and it’s a big problem for me. However if you’ve never read the original novel then it probably won’t make any difference to the average listener. I have read the full novel and I can remember some of what was cut but I doubt this will bother too many other people.

Doug Savant, the actor who portrayed the character Sergeant O’Neal in the film, provides the narration for the audio book. He does a decent enough job, altering his voice enough from character to character to make it clear who is currently speaking in each scene, but his vocal range is short enough that many characters speak with practically the same voice and inflection. There are no sound effects unfortunately. Not once do we get to hear Godzilla’s roar or footsteps in the background and I personally feel that is a big mark against this production. There’s some cheesy little bit of music to signal the start and end of each side of the cassettes and its not pulled from the movie’s original score. The best movie based audio books I’ve ever heard are the Star Wars titles which incorporate both the sound effects and the scores from the films into them and this makes GODZILLA 1998 sound even weaker in comparison.

Bottom line whether or not you enjoy this production largely depends on your feelings towards the original source material. If you like or even tolerate GODZILLA 1998 then I would give this a recommend mostly for the novelty of a Godzilla audio book. The only similar piece of media was the Wonderland Record Godzilla King of the Monsters but that was a full blown audio drama complete with full casts and sound effects. As a Godzilla fan and an audio book lover I do enjoy it in spite of its shortcomings that I’ve mentioned already. I found it fun to listen to when writing, drawing, etc. If anything it makes me wish for an audio book version of the Godzilla(2014) tie in novel. Legendary’s Pacific Rim (2013) received an audio book version of its novelization so I find it curious that Godzilla(2014), another Legendary Pictures produced film, hasn’t seen one yet.