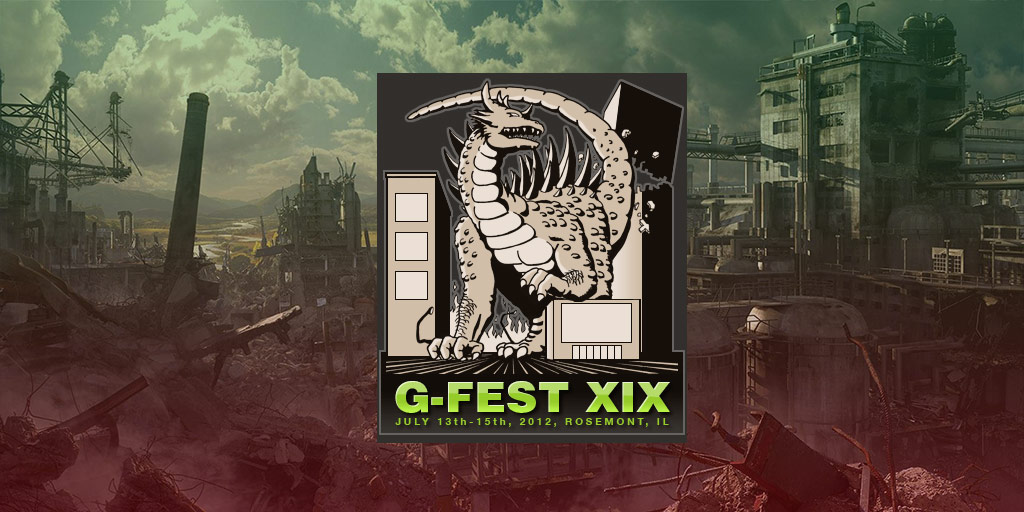 G-Fest: an annual convention all about Godzilla and really all Japanese kaiju. With merchants, theater movie screenings, art displays, costume contests, Godzilla video game tournaments and celebrities, its a bit of a kaiju fan wonderland. Although it has, many years ago, been held in Los Angeles, it is typically located in the Chicago area.

Godzilla fan and friend John Drooney was gracious enough to record this wonderful G-Fest XIX video tour. Now I have never had the pleasure of experiencing G-Fest for myself. Sadly, that’s not going to change this year either, as I am unable to attend. So this video is all the more special to me in particular.

After watching the video, I was able to, perhaps through the mystical vibe that was captured, feel the pride and joy of the fandom that is dedicated to Godzilla. Thank you John for this wonderful gift. Also, may my brothers and sisters in the Godzilla fandom enjoy their time this year at G-Fest.

Founded by J. D. Lees and John Rocco Roberto, G-Fest is an annual convention for kaiju, with an emphasis on Japanese monsters. It’s an offshoot, of sorts, of the fanzine G-Fan. The very first G-Fest happened way back in 1994 in Illinois, although it became much more organized the following year. It continued to take place in Illinois up until G-Fest ’99, when it moved to California. The convention’s stint there was short lived, though. By 2001 it had moved back to Illinois, which is where it continues to reside. From 2001 through 2004, it was also well known for hosting the American theatrical premieres of the Millennium Godzilla films. This tradition stopped with Godzilla: Final Wars (2004), which actually had its worldwide premiere in Los Angeles, California at the Grauman’s Chinese Theatre.

For more information on G-Fest, including details on how to attend yourself, visit G-Fan.com.