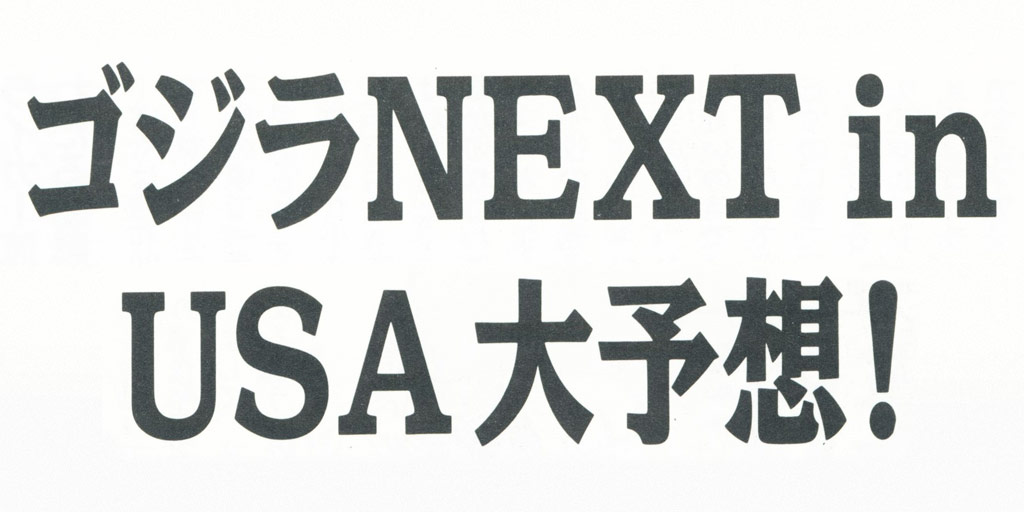 Now, here’s something a little different. Below is a translation of pages 48-49 from Space Magazine Uchusen Quarterly Vol.66 (1993). I thought it would be fun to showcase some stories from Japanese G-fans… Needless to say, they have their own share of creative – and sometimes absurd – tales to tell! As usual, very special thanks to Noah Oskow for the following translation!

Our Big Forecast for Godzilla, NEXT in USA!

“GvsMG” design staff are illustrating stories thought up by our readers!!

Our magazine has been continuing to recruit the “Big Forecast NEXT Godzilla Story.” As the whole story of “GvsMG” has become more clear, we were shocked at how spot-on your predictions were (those who caught on from the “Spaceship Library Collection G vs MG Corner” were especially amazing!). Now then, with G-stories having been requested from our foreign edition simultaneously, our readers have been sending us interesting things that only they could have come up with, one after another. And specially for this one and only time, we’ve gone ahead and had the Kawakita Group design staff illustrate four of them.

An American private research group has been attacked by Godzilla while investigating offshore oil fields. A nuclear submarine that had been patrolling the waters nearby receives the SOS call and attacks, but standing no chance, retreats. Godzilla gives chase, heading towards the mainland USA. After a huge battle takes place in LA, the US forces bring down Godzilla using a satellite cannon. Godzilla, who has fallen into a state of false death, is carried by the US forces to a secret military facility to be made into a cyborg. They mean to make Godzilla, who can withstand nuclear strikes, into the US military’s trump card for localized battles. Five years later, Godzilla receives applause from the masses thanks to his new role as the watchman of world peace, and it’s been decided that there be a military review set up in the waters off New York for the president to observe the cyborg monster. However, during those five years Godzilla’s great brain, which had been completely cut off from his spinal cord, has seen its functions shift to the second brain he possesses in his lower body.

During the very height of the military inspection, Godzilla destroys his nerve switch with the use of violent interior radiation, and having regained control of this body, bathes the president in his atomic breath, and then emerges from the ocean unto Manhattan. With Godzilla having been outfitted with high-tech weapons, America is completely at a loss.

Aoi Kunio (あおい・くにお) 〇 Works as a mechanical designer for “New Astro Boy.” “UWW,” which was serialized in “Hobby Japan,” became quite the hot topic, bringing new ideas to the Ultra Mecha genre. Designed “Mother” and “Kids” for “G vs. K” as well as Hummer for “Ultraman G.”  Also currently contributing to the covers for Tokuma Shoten’s “Eight Eight Fleet Series” (Koshu Tani).

The mysterious giant life form Ruska is said to inhabit the seas off Bermuda. The creature uses its massively long tentacles to pull passenger vessels to the ocean floor and eat the humans within. Receiving a passenger ship distress call, a rescue team moves to the scene. Somehow, at the site of the event a number of Ruskas rush in to attack Godzilla. And yet, Godzilla is able to repulse them with ease, and he moves on to invade the Gulf of Mexico. Hit by a two-pronged strategy on land and by sea by the American military, Godzilla momentarily disappears from view, but he once again comes up on land in Mexico, advancing on America. In the midst of the turmoil, Mexicans are smuggling themselves into America. Godzilla pulverizes Dallas, and although he attempts to return to the sea via the Florida Peninsula, just at that time a Ruska even larger than Godzilla appears out of the ocean. In the previous fight it had been changed bodily via sucking on Godzilla’s blood, making it even more gigantic, and even more brutally violent. It has come to suck Godzilla’s blood once again. The battle between the two gigantic beasts begins to unfurl, leading the US armed forces HQ to decide to make use of their newest weapon, the freeze bomb. 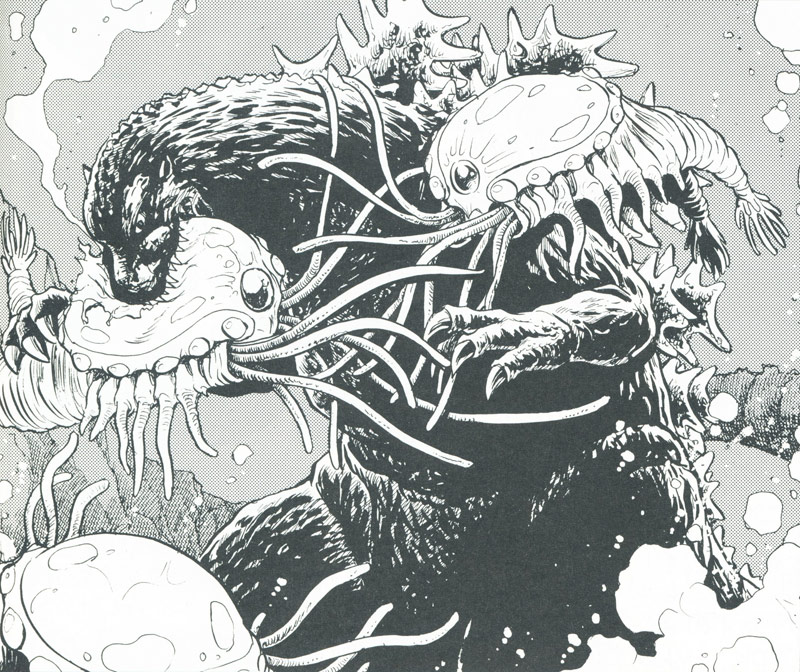 Shinji Nishikawa (にしかわ・しんじ) 〇 Has been writing Godzilla manga since his doujinshi self-published era under the pen-name MASH (appearing under that same name in Vol. 39 of this same magazine). Among other things, he managed the final manuscript image of the design of Biollante.  In addition to his usual work on the Rinpu Shobo Encyclopedia Series, he established his reputation via super-deformed illustrations.

In the near future, the Spaceship Mayflower, having departed on mankind’s first outer-space expedition, arrives at Planet G. That planet, with its hot temperature and humidity, is controlled by 5-meter tall dinosaur-like life forms. The crew of the ship are killed one-by-one. The sole survivor, ethnically Japanese Jeff Goto, explodes the reserve fuel, burning up the dinosaurs’ planet as he makes his escape. However, one dinosaur, mutated by exposure to atomic rays, has boarded the Mayflower. At the end of the the life and death struggle, Jeff manages to drive back the monster. Jeff, having returned to earth, has become a worldwide hero overnight, but one day, he notices that changes are occurring in his own body, and he begins to hide himself from others. A piece of organic material from a monster that had clung to the partially salvaged Mayflower has begun cell division, and while it absorbs the body of an attacked NASA employee, taking on a gigantic form just like the Thing, it begins to wreck destruction upon the city. At that time, standing in the way of the monster appears Jeff, who has been turned into Godzilla as a result of being covered in the spurt of a monster’s blood. 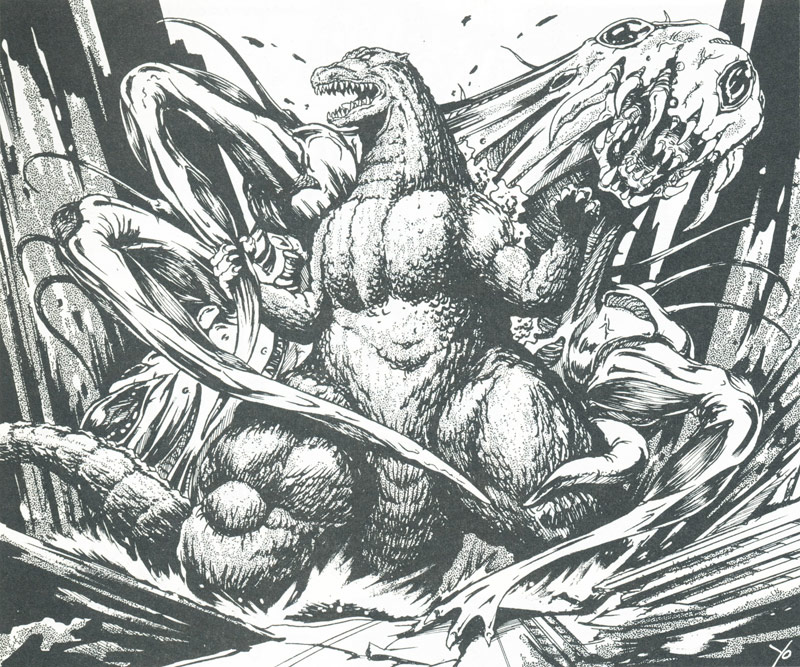 Minoru Yoshida (よしだ・みのる) 〇 Thanks to his participation alongside Mr. Aoi and others in the HJ Magazine “UWW,” managed the monster design for “Ultraman G.” Within the Godzilla Series, his name appeared on the final manuscript images for Battra (adult and larva), among other works. In addition to “B-CLUB” cover illustrations, he’s also actively engaged in creating illustrations for science magazines and pictorial books.

Once again, Godzilla has appeared in Tokyo. The Japanese people are in danger! The United States of America, wishing for world peace and the happiness of humanity, dispatches the genius Professor Maximilian and the young Jim. Professor Max hatches a plan to use an anti-gravity missile to launch Godzilla into space. Just as he believes his strategy is about to pay off, Mount Fuji suddenly explodes in a massive eruption. Godzilla is sucked in through a rift in space-time created by the eruption. At this rate the entire history of mankind will be thrown into chaos at the hands of Godzilla! Professor Max and young Jim give chase after Godzilla in the time-boat they have emergency shipped from America. Around that same time, Godzilla is crushing Napoleon’s forces at Waterloo. The Professor and his young charge rush on, but Godzilla’s form suddenly disappears from view. It would appear that somehow the anti-gravity missile that stuck into Godzilla’s tail is affecting space-time. Godzilla appears in different eras, one after another. The Professor finally manages to remove the missile in the world of Jurassic Period.

Ryu Hariken (はりけん・りゅう ) 〇 We don’t believe we really need to introduce him to the readers of this magazine, but he’s a fighting manga artist and first-class fool for stuffed animals. Having worked on Heisei Ghidorah as well as Battra Larva, he’s now in charge of Baby Godzilla. He provides a large amount of image boards previous to filming within the Kawakita group. He fulfills an important role in reviewing the materials used for the images that actually go to film.

How did you feel about all these? Weren’t any and all of them quite interesting as works that minimize the sorts of stereotypes Americans (?) might have towards Godzilla? Now that we’re done with this part, let’s go ahead and introduce a few more of our readers’ works.

・TriStar Pictures, fed up with the strictness of Toho’s checking, assassinate their Japanese counterparts. The embodiment of that persistent grudge, G, attacks Hollywood. The American side attempts to oppose him, but Irwin Allen and Bert I. Gordon’s blundering monster had no chance at rivaling Godzilla…

・“Godzilla vs. the Superhuman Ant”  Godzilla makes landfall in LA based on the scheming of North Korea and Iraq. While Japan is involved in disputes over peacekeeping operations, G encroaches on the Detroit nuclear power plant. At that time, G’s body floats into midair. “It’s that atomic power! The Superhuman Ant!” With the death of Superman, America must turn to the atomic ant, Superhuman Ant. By the president’s request, the Ant carries G to North Korea, thinking to destroy the Pyonyang Nuclear Reactor and to protect world peace. However, being told to next take Godzilla to Iraq, the Ant’s friendly feelings towards humans are all used up, and he sets out into space with Godzilla.

・ “Godzilla vs. The Führer”  Izumi, a Japanese traveler, loses her way in an alternate-dimension America that became controlled by the Nazis following the World War. The Nazis capture Izumi, use her power as the queen of an underground kingdom that was destroyed in an ancient nuclear war to revive Godzilla, and plan to attack Izumi’s people’s world. However, the revived G destroys his controller, and he begins to attack the Nazis. The Nazi’s Bio-Monster Führer moves to attack G!

・ “Godzilla, what is this with you attempting to get farther in the world than me, I won’t forgive you! Uuuooooohhhh!!” Enlarged to a tremendous height of 100m by the power of pure rage, Eisaku Yoshida, working on instinct, moves towards the foot of Mount Fuji and clashes with Godzilla!

Thanks for all your entries, everyone.