When you were a child, did you ever play with those sliding tile toys? The ones where the image is all messed up and you have to keep sliding the images around more and more until you can successfully slip together the real picture? I used to get really frustrated with those old toys, especially when they wouldn’t slide smoothly, and the final image that you get wasn’t always very satisfying. Well, the Chocolate Godzilla Illustration Block (ゴジラ イラストブロック) sets, each going for ¥1080 yen, from Hunter Confectionary reminded me of those old times, but with rather more interesting illustrations (at least to me).

First a few words about the design of the boxes. Eschewing the sort of bizarre futuristic military camouflage look of some of Hunter Confectionary’s other Godzilla Valentine’s chocolates, here we have elegant, striking black and white images of the Monster King against stark, black backgrounds. Naturally the Shodai Goji set features a classic promotional image of the first Godzilla to appear on the big screen, and the Vs. Godzilla Set features the Vs. Godzilla (also known colloquially in the West as the Heisei Godzilla) in profile. I really like these designs because they have an undeniable “coolness” factor, and the black exterior is complemented well by the red interior.

What makes the designs even more fun is that on the inside of the lids of each  we get some details about the monster and the military hardware featured on the chocolates. For Shodai Godzilla, we get a profile image of the first Godzilla, plus a little information stating that this Godzilla first appeared in the 1954 film. Underneath that are images of F-86F Saber jet fighters and the Oxygen Destroyer itself (with information about who invented the super weapon that would be used to instigate the monster’s demise).

An inside view of the “Shodai” Godzilla box. 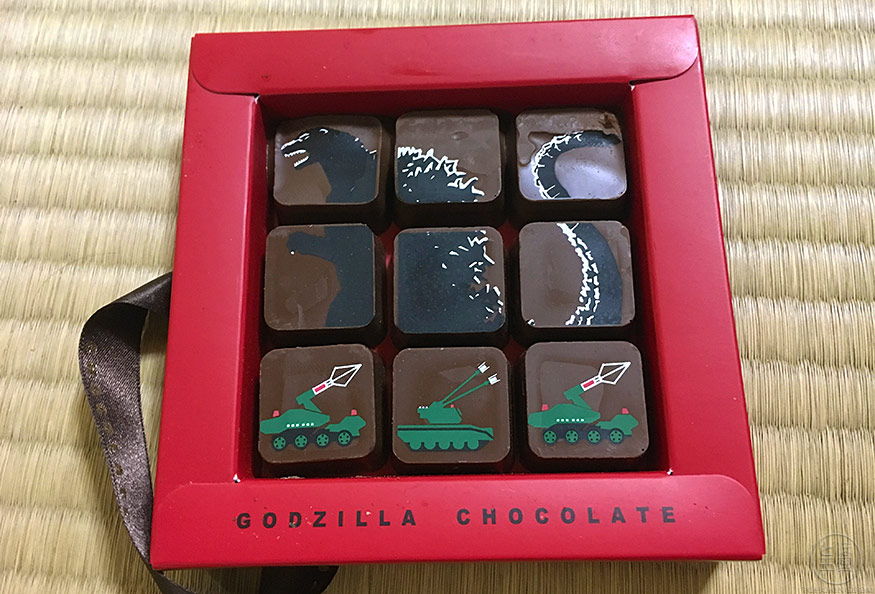 The Vs. box chocolates.

The chocolate, separated into nine blocks with six reserved for depicting Godzilla in each box and three for the military part, is all milk chocolate. The illustrations are not very detailed, but look good—the Godzilla illustrations are all black and white, and the military illustrations keep colors simple as well—the Saber jets sport red, white, and black, the Oxygen Destroyers have black and white, and the two Masers each have white, black, green, and red coloring. I only tried the chocolates from the Vs. Godzilla set so far (because the set started melting, as you can see in the picture), and the chocolate is creamy and sweet. I was a little concerned that I would be able to taste the coloring used, but that doesn’t seem to be a problem.

With the Shodai Goji set, I played around a little with the pieces to mix them up, as seen below. Presumably even a three year old would be able to solve this puzzle extremely easily, and the chocolate melts easily, so most little kids would probably just end up eating the pieces instead of putting together the puzzle. Still, to make it a bit harder, you could also rotate the pieces instead of just mixing them up.

An image of what happens to Godzilla when he gets hit by the Oxygen Destroyer.

Again, while the chocolate itself is all the same with nothing inside, the packaging and the designs on the individual chocolates make these sets extremely fun. And who wouldn’t want to eat the Oxygen Destroyer? For monster fans, you can also do a bit of role-play as you eat the airplanes and Maser Tanks. While maybe you can’t play with these as easily as you could with the Mini Chocolate Godzillas and Godzilla Can, still it’s pretty fun.