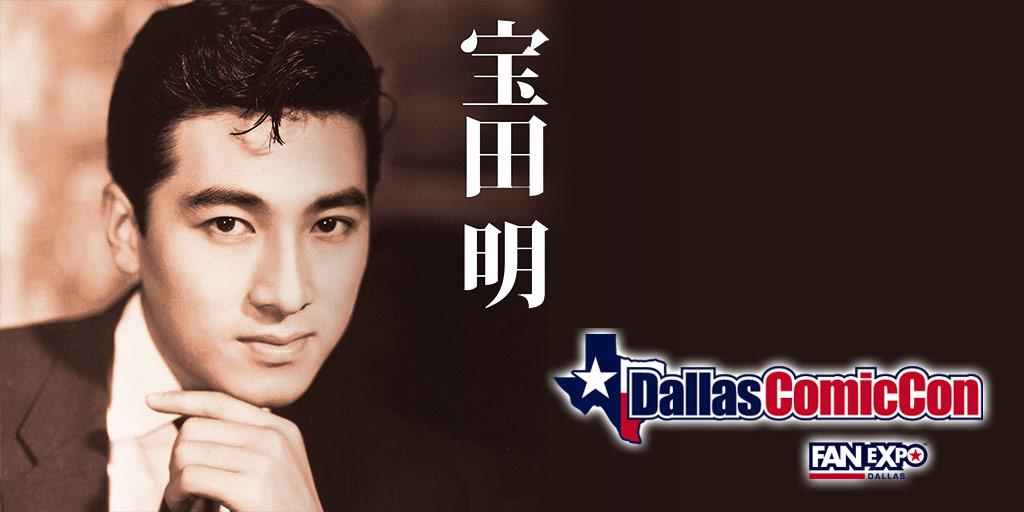 I’ve been both a Godzilla fan for most of my life and a native Texan for all of it. While I was able to find a few like minded G Fans, and Godzilla related merchandise would show up in local comic book and toy stores from time to time, there was never any Godzilla related events to attend in Texas for most of my life. However as I grew older and became more involved in online communities I began to learn of events that appealed to my love of science fiction in general. 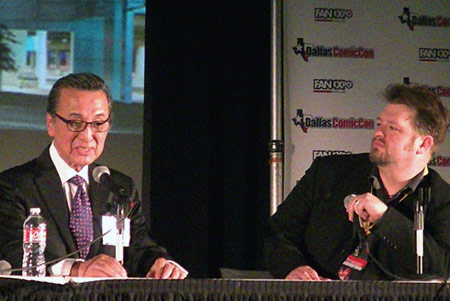 I learned of and attended my first local comic convention in the summer of 2012 in the appropriately named Dallas Comic Con and I was hooked from then on. Dallas Comic Con is one of three events in the Dallas area that run every year. Sci-Fi Expo runs during the beginning of the year and as its name suggests is focused on the science fiction side of fandom. Dallas Comic Con is run during the summer and features a healthy dose of comic book guests. Finally Fan Days run during the fall and tends to feature Horror related guests. I’ve attended many of these events had have always enjoyed them, particularly the guests who have ranged from William Shatner, Stan Lee, and Christopher Lloyd.

The summer of 2014 saw the return of Godzilla to the big screen and with his return Dallas Comic Con added their first big Godzilla related guest since I have been attending, Akira Takarada. Godzilla like any popular franchise has had some presence in Dallas Comic Con namely due to the various vendors who sell Godzilla related merchandise, but with the exception of Marvel Godzilla King of the Monsters comic series artist Herb Trimpe, Takarada was their first guest who had participated in any capacity with the Toho Godzilla series.

With this exciting addition to their guests and my recent position on the Toho Kingdom Staff I thought this would be a great opportunity to cover Dallas Comic Con for Toho Kingdom and hopefully expose local G-Fans to this event by specifically focusing on the Godzilla related aspects of this convention. 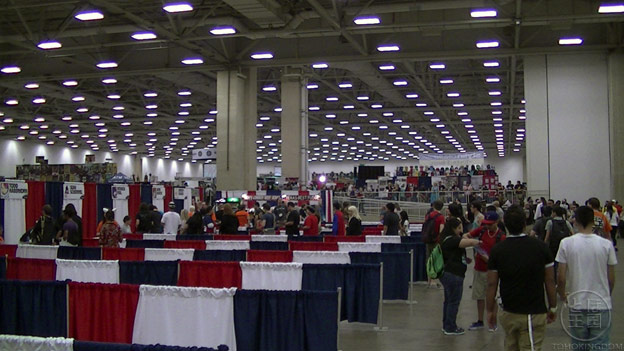 The convention ran for a total of three days, with Takarada giving and audience question and answer session on the second day. With that in mind I decided to spend my first day at the convention in the vendor area. 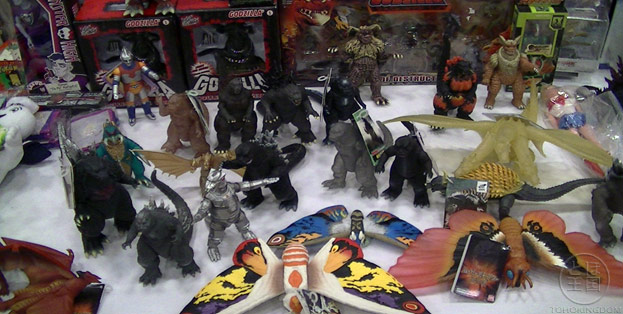 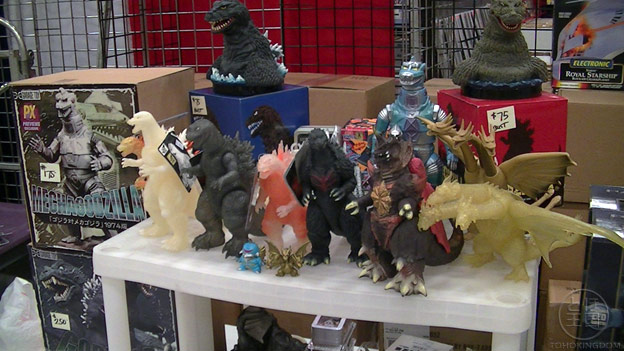 There was a good deal of Godzilla related merchandise available for G-Fans to buy from most of the various vendors. While there were a lot of the American mainstays in the form of Trendmasters and Bandai Creations figures, there were several vendors selling Godzilla collectables from Japan. 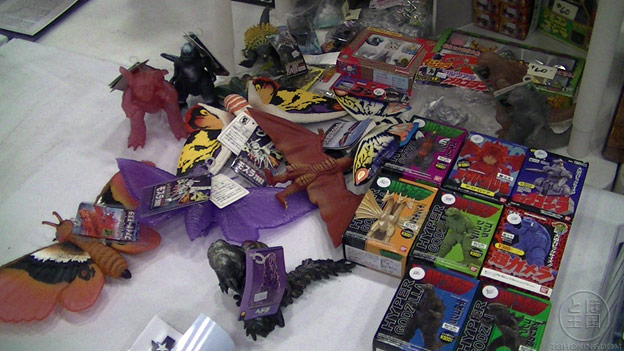 Besides the rarer Japanese collectables I also saw several vintage American items including the Shogun Warriors Godzilla, the Trendmasters Ultimate Godzilla, and the newest Godzilla 2014 figures including the sought after Jakks Pacific Giant Sized Godzilla figure. 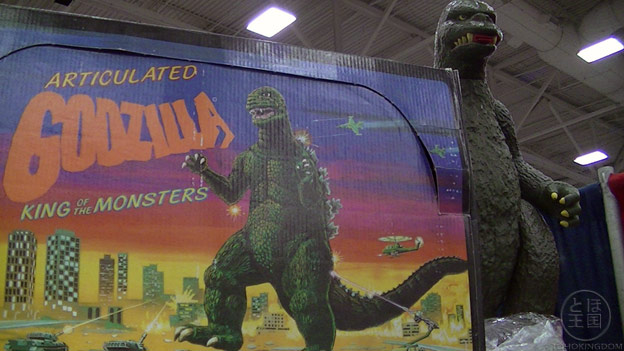 For me personally this was the first opportunity I’ve had so see most of these highly regarded collectables in person, and G-Fans with a full wallet and a desire for these items would do quite well to visit here.

The second day of the convention was the day I got to meet Akira Takarada. With Mr. Takarada being the first Dallas Comic Con Guest to have been involved with the Godzilla series there was a substantial amount of G-Fans eager to meet Mr. Takarada. 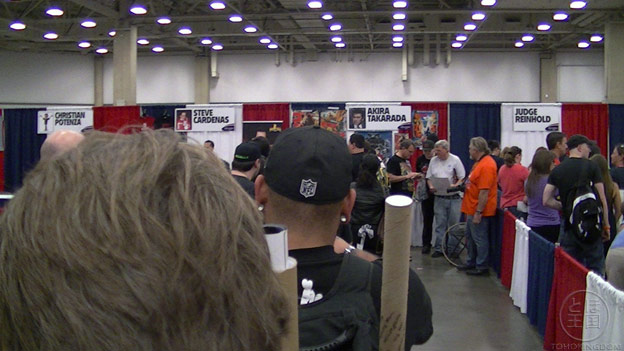 The above picture was taken while I was in line to get Mr. Takarada’s autograph. There were a lot of Godzilla fans present and it was a lot of fun getting to talk with like minded fans. This social aspect of conventions has always been one of the best parts of any conventions and easily worth visiting a convention for. 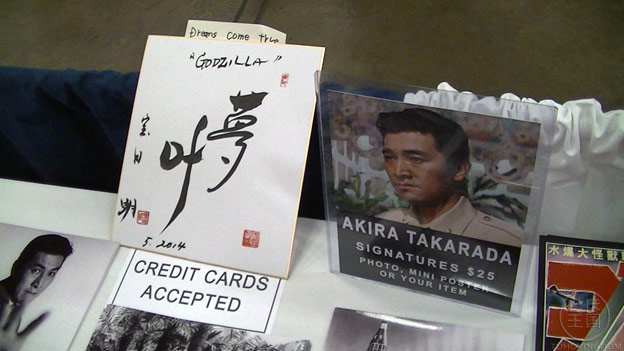 Guests who sought Mr. Takarada’s autograph could bring one of their own items for Mr. Takarada, to sign, or pick from the many items available at his table. These included publicity photographs for his films including Godzilla (1954) and Invasion of Astro-Monster(1965), a blank white poster, or a poster for either “Gojira” or the Japanese re-release poster for “Godzilla King of the Monsters”. I decided to pick the original Japanese poster for Gojira for Mr. Takarada to sign. 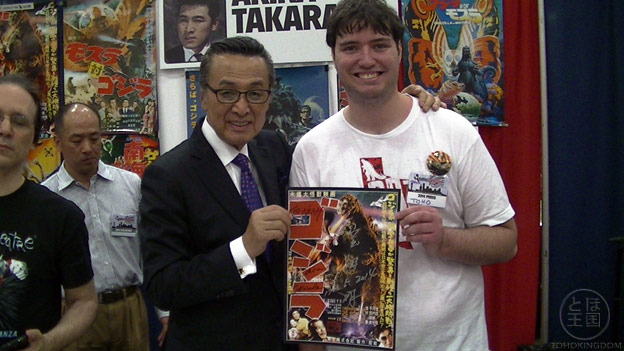 Obviously this was an awesome moment for me as a Godzilla fan! Mr. Takarada was in the very first Godzilla movie I ever saw, Godzilla Vs. Monster Zero, and meeting him in person was a wonderful experience! Mr. Takarada despite not speaking a lot of English was very warm and friendly with all his fans. As the picture above shows, he took photos with anyone who came for autographs and who wanted a photo with him.

Pretty soon after receiving my autograph, Mr. Takarada went to begin his question and answer session. A fellow G-Fan and I were able to follow Mr. Takarada to the hall for his Q&A session, and on the way I spoke to a person who I believe was part of Mr. Takarada’s group and one of his helpers. He informed me that they were quite surprised to see how many Godzilla fans came out to meet Mr. Takarada which is pretty awesome. 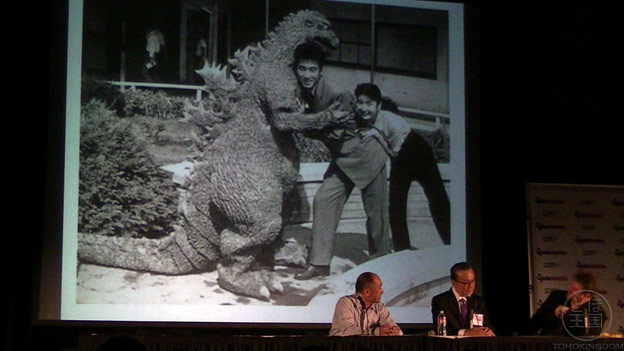 I won’t go into great detail on the Q&A session because I filmed the whole event! I will put the link at the end of this article for you to watch and I highly recommend that you do. Despite some translation mishaps, Mr. Takarada was both a funny and energetic presence, who entertained us all with his tales of behind the scenes events, including his fear that the Gojira suit would bit him upon first seeing it, his feelings on Godzilla as a tragic character, and his desire to be in the sequel to Legendary’s Godzilla film.

All in all this summer’s Dallas Comic Con had a lot to offer G-Fans. Not nearly as much as purely Godzilla or Kaiju dedicated events like G-Fest, but more then I have normally seen offered to Texan Godzilla fans. Seeing the return of Godzilla to the pop culture fore front and how well Mr. Takarada’s visit went I hope that we see Dallas Comic Con add more Godzilla or Kaiju celebrities to their future events.