I've done Kong a disservice. I've done powers talkback for everyone but him. His abilities may not be flashy like Atomic Rays but Angiruas and Baragon have things like burrowing and extraordinary jumper listed in their powers/weapons along with their spiked carapace and heat rays. While some of these abilities seem mundane cause a lot of animals and heck even we can do them, not every animal or even monster can. And unless Kong gets upgraded with super powers I guess it's as good as now to talk about what he can do.

While seemingly a mundane ability, it should be noted that we rarely see the non-flying monsters climb, sure Kong, Skullcrawlers and the MUTOs to an extent can do it, we are probably not gonna see Godzilla climb anything outside of a mountain. While limited in an area with no mountains, say in a city where buildings would probably collapse after Kong jumps off one, it should be noted he probably would have less trouble climbing a building than say the female MUTO, whose clumsy nature caused buildings to break apart from her hooks when she used them for leverage. 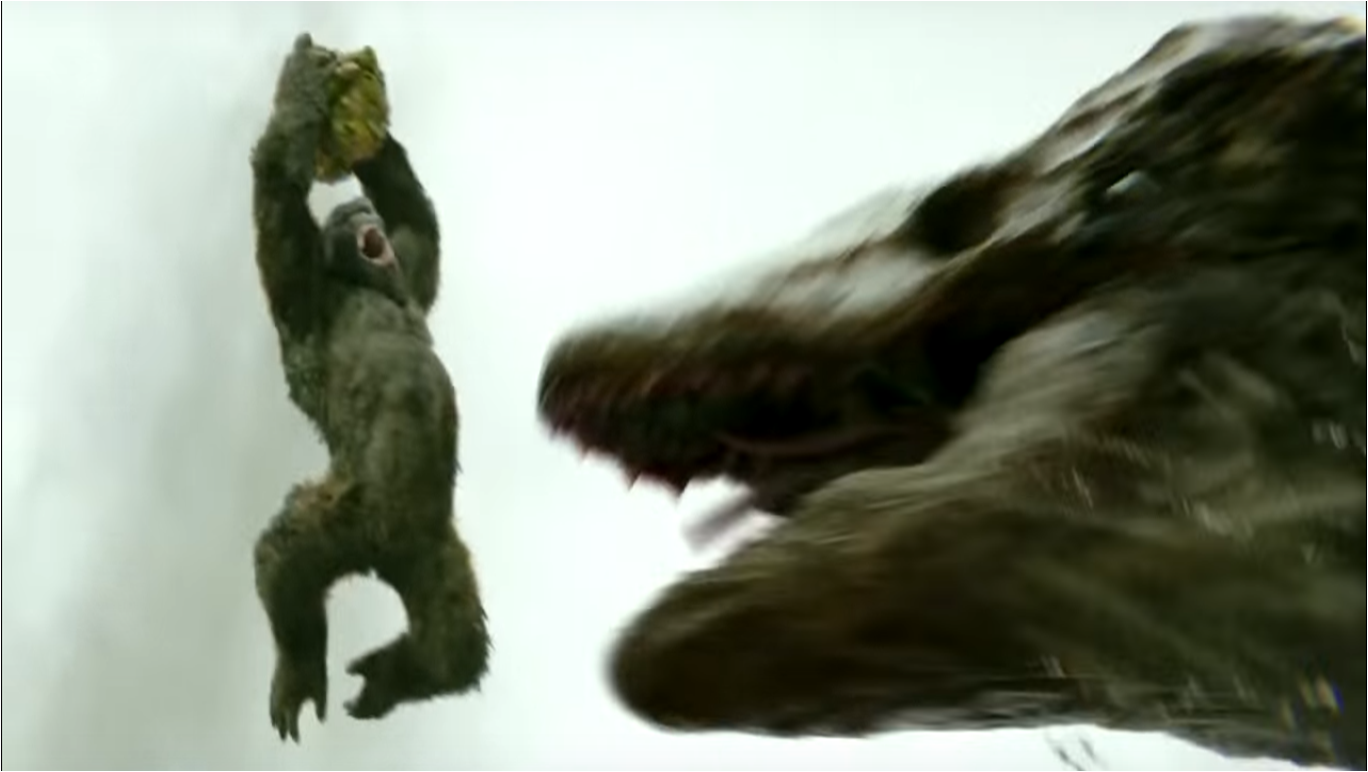 Kong is capable of jumping both far horizontally and vertically. So much so he would wall jump from mountain to mountain. He jumped over a helicopter to so the one chasing him would be caught in each other's crossfire. He can even jump pretty high and far even while carrying a large boulder which as shown when he managed to get close enough to the big Skullcralwer to be with in jumping range but far enough that it didn't know he was there til it was too late.

Being a primate, Kong naturally has hands. Unlike most other primates, Kong's dexterity is closer to and even excels many humans, being more akin to a highly trained human martial artist. Sure, Godzilla has shown multiple times he can grapple, even forcibly opening a female MUTO's mouth to breath his Atomic Rays into her mouth, but Kong's dexterity would allow him to gain the leverage to overpower technically stronger and heavier monsters that have less dexterity than him. Kong's dexterity combined with his human level intelligence allows him to wield tools such as trees to use as a club, trees to throw as darts, and even use chain and boat propeller as both a flail and a knife.

Even without tools, Kong could break necks, strangle or do his signature finishing move the jaw breaker.

Kong may lack in super powers like the other kaiju, and is less durable than average, but he's got the same unkillable willpower as any other Titan rivaling even Godzilla himself, which allows him to fight in-spite of pain or injuries he might gain. I look forward to seeing the Mountain Who Thunders Death earn the King in his name when he fights The King of The Monsters himself in 2020.

I mean power like these,are still really good powers! And good help for next year, Godzilla can't hit what he can't touch.

A guy who randomly stumbled upon this place one day, invested much too much time into it, and now appears to be stuck here for all eternity..and strangely enough, i do not regret it!
Top

Not quite super fast, but super agile and super dextrous. He might not be as strong as Godzilla, but he can fight a lot better. Godzilla has strength and Kong has skill. He can float like Mothra and sting like...Mothra.
Last edited by GuardianGhido on Sun Oct 20, 2019 9:06 pm, edited 1 time in total.