Crossovers you would have liked to have seen

For the discussion of Toho comics, books, posters, trading cards and any other merchandise that doesn't fall under the other categories.
Post Reply
38 posts

IDW acquired the rights to publishing Sonic the Hedgehog comics.

^Can't tell if serious, but that's obviously untrue as pointed out before, there's been lots of crossover media like the Godzilla/ShinChan thing and City Shrouded in Darkness.

A couple of characters that I forgot about until recently, that I'm surprised didn't meet up with the King of the Monsters during his Dark Horse run was Art Adams' very own creations, Monkeyman and O'Brien. 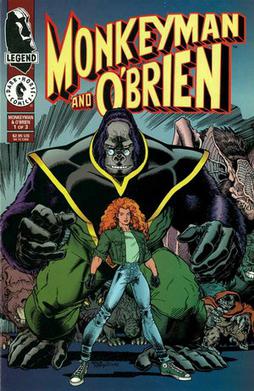 Whose arch foe, the Shrewmanoid, and his monsters, 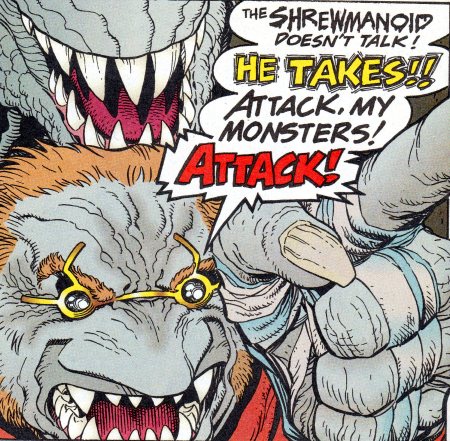 got a mention in the Dark Horse GODZILLA COLOR SPECIAL !. Too bad we never got to see DH's G-Force's own battle with underground tyrant.
"All literature is one of three stories: a man goes on a journey, a stranger comes to town, and Godzilla Vs. Megashark. "-Leo Tolstoy.

-A DC/Godzilla crossover would be awesome
-Hellboy/Godzilla with Mignola as writer and artist
-Godzilla/Mazinger Z in manga format
-Godzilla/Super Sentai crossover in manga format as well
Here's my Instagram, I post photos of my figures, customs and sometimes other stuff:
https://www.instagram.com/buruno.98/

I'd like to see Godzilla battle the Hulk, like so many people wanted to have happened in the Marvel comic. After all, if Hercules can topple Godzilla over (as he did in Godzilla, King of the Monsters #3), I'd love to see what the Hulk could do to him. Ah well, we can dream, can't we?

mikelcho wrote:I'd like to see Godzilla battle the Hulk, like so many people wanted to have happened in the Marvel comic. After all, if Hercules can topple Godzilla over (as he did in Godzilla, King of the Monsters #3), I'd love to see what the Hulk could do to him. Ah well, we can dream, can't we?

Another one I'd like to see is one with Ultraman. In fact, I'd love to see Skip Peel do an Ultraman story in The Journals of Dr. Rex Summeral in G-Fan. I'd also like to see one in which Dr. Summeral finds out that Daimajin is a real kaiju after all and not just "those absurd Daimajin legends", as he once called them.
Last edited by mikelcho on Thu Jan 30, 2020 11:31 am, edited 5 times in total.

LSD Jellyfish wrote:To be transparent I have a disdain for the Power Rangers as it's a very clear butchering of a show and the kind of guy the owner Saban is. For this reason, Id rather just have a crossover with an actual Japanese series and not the Power Rangers.

To be fair, Power Rangers is far more science fiction than Super Sentai is, and some series are much better liked than their Japanese counterparts were. Though as a "butchering"? I have to disagree. I find Zyuranger lacking, though I love some of its mythos' elements. The only Sentai series I can say I truly liked is either what I've seen of Dairanger or the first ten episodes of Gobusters. I can't quite see any Sentai series truly working or others like that because they're obviously gonna choose the most current shows, which can be middling to terrible.

Then again, I really loved watching the show when I was growing up, so that's my bias showing. That's why I'm iffy on Saban anymore.

Haim Saban's unethical business dealings and how the company and its producers treats its actors is part of why I don't watch the show anymore or support it. And if I get the comics, they'll probably be secondhand from now on. Another reason why I don't is simply because the show itself is staler than the worst elements of the Disney seasons. When I think about it, I really wished that Disney kept the franchise and gave it to Marvel to do as they please.

I don't know why, but I suppose for similar marketing reasons I wouldn't like Godzilla to crossover with transformers. And yeah I'm aware a lot of current stuff like Ultraman are pretty much made to sell toys, but for some reason I don't like the idea of Godzilla crossing over with American money machines.

I do agree that Transformers wouldn't work out because it sounds terrible. G.I.Joe probably would given its themes and being typically more grounded in concept and at times, consistent with either the Showa or Heisei series.

I feel many American money machines would tonally be more consistent than the Japanese like if Godzilla went against Aliens or the Predators or some kind of horror franchise. They're obviously not going to depict Godzilla as the Showa iteration or with any of its attributes. The current Power Rangers run at Boom would be phenomenal. I don't see many Japanese franchises that would honestly cross over well to do it proper justice, or if there are , would be even chosen to crossover to begin with.

Guyver would work, but that's extremely obscure now, and a few others would work. I do have to wonder how the blatant insanity of Jojo's Bizarre Adventure would work if it crossed over with Godzilla. That would be a challenge.

]I suppose in terms of other crossovers, well a lot of obvious ones like Ultraman are mentioned. But I'd double down on the idea of Batman, and hell have an Avengers crossover again, a lot of people forget that totally happened. Godzilla fighting a superhero is really easy to do, and no one is gonna complain except mega Godzilla fanboys if Godzilla loses or is temporarily stopped by Batman.

On this idea? I'd want them to adapt the Batman vs. Godzilla script into a comic and if possible, in the 60's Batman comic. If not, then current DC would work just as well. I could care less if Godzilla wins or loses because that's all in the heads of the writers anyways. I sort of wished that DC crossed the Monsterverse with DCEU just so we could have a chance of it being on the silver screen, no matter how crazy that sounds.

An Avengers comic would just be awesome, too.

What about Godzilla and Star Trek tho. Sounds super outlandish, but you could easily make a story about TOS crew visiting a planet where King Ghidorah or some other monster is reeking havoc, and having a large thematic debate of whether interfering would be against the prime directive. You could also have a space fight between the enterprise and King Ghidorah, and then interactions between Xilliens and Star Ship Fleet. On top of that TOS was fully of a mixture of serious and very campy moments, and often used rubber monsters and aliens so a lot of Showa stuff would actually blend perfectly and tonally,

-Both are from the Cold War.
-Both are topical about society.
-Both revolve around science fictional concepts that date.
-Both have the capability to be extremely interesting as stories go when it comes to action.

I doubt Toho would want to use the Showa version unless they were convinced, though. It would be cool if it happened like that because the story honestly writes itself much better than a Power Rangers one would, which would be Godzilla and the Rangers fighting Ghidorah. On the other hand, a limited edition Kiryu-Dragonzord would be pretty awesome to look at.

I like the artwork, The One and Only and G1985. Did you do that yourselves?
Take care and God bless

Jason wrote:I like the artwork, The One and Only and G1985. Did you do that yourselves?
Take care and God bless

I wish I did the, or had the skills, talent draw that art. The man behind that wonderful art work was the creator of MONKEYMAN & O'BRIEN , and the co-writer, artist of the GODZILLA COLOR SPECIAL, Art Adams.
"All literature is one of three stories: a man goes on a journey, a stranger comes to town, and Godzilla Vs. Megashark. "-Leo Tolstoy.

Here’s another crossover that I would have liked to have seen. Courtesy of the site, SUPER-TEAM FAMILY: THE LOST ISSUES. 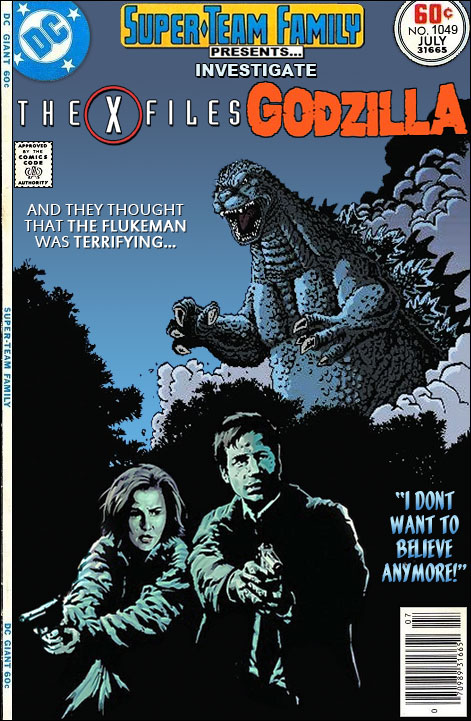 "So ends the human race! The future is built upon the past, but your kind shall never see it! Your mother and father are dead, tiny one. And now, it is your turn...TO DIE!" - Grima, Fire Emblem Awakening

SickleFeather wrote:Here’s another crossover that I would have liked to have seen. Courtesy of the site, SUPER-TEAM FAMILY: THE LOST ISSUES.
https://3.bp.blogspot.com/-RRrJhwVI8Ag/ ... 0/1049.jpg

You know - the idea never crossed my mind until you posted that.

I'd be interested in seeing a one off or 2 parter. I can see it being rather interesting.
Tohokingdom Thread| DeviantArt | Youtube The One and Only wrote:

*Finds out that Godzilla vs. Cthulhu was close to happening*

..Well that sucks! That would've been an instant buy!

Ok now hear me out.

IDW has collaborated with Dark Horse before.

Dark Horse got the rights to make this as a crossover. 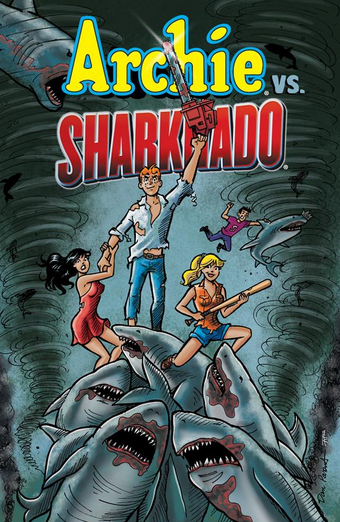