For the discussion of Toho toys, models, figures and other collectibles of this nature.
Post Reply
46 posts

The meanest Millennium Godzilla and my personal favorite, it's... 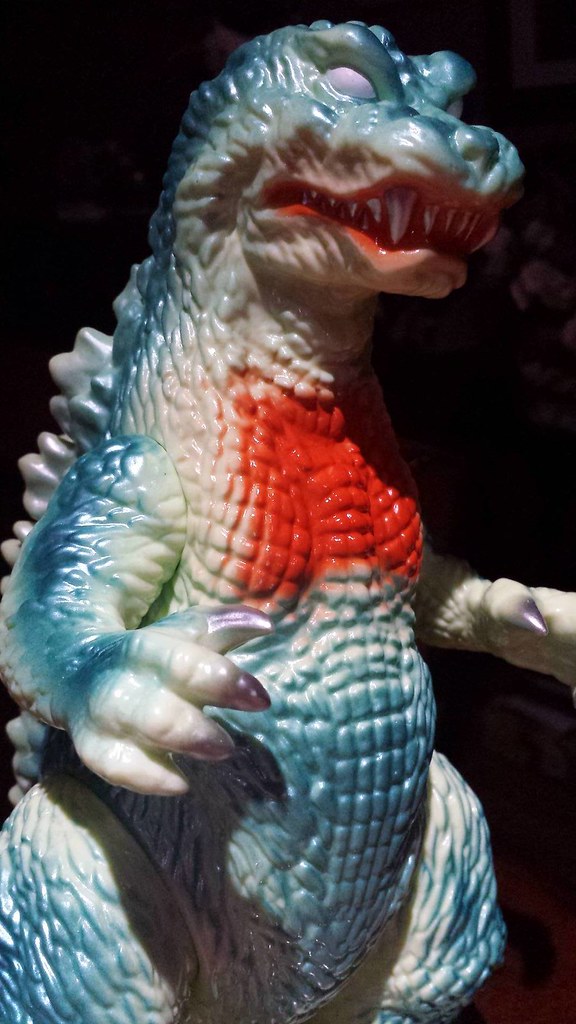 I just got the M1 Vinyl Wars reissue of this suit for Christmas, and WOW, it's a knockout.

This suit has a special place in my heart because it was THIS review that made me start collecting Godzilla figures in general!
I'd like to thank you for that, Mr. Fresh Vinyl. Sadly I never did manage to get my hands on the figure.

More reviews can be found at http://freshvinylhq.com/!

I was tempted to add "And Company" due to the small volume of figures for the GMK suits of these kaiju, opinions? 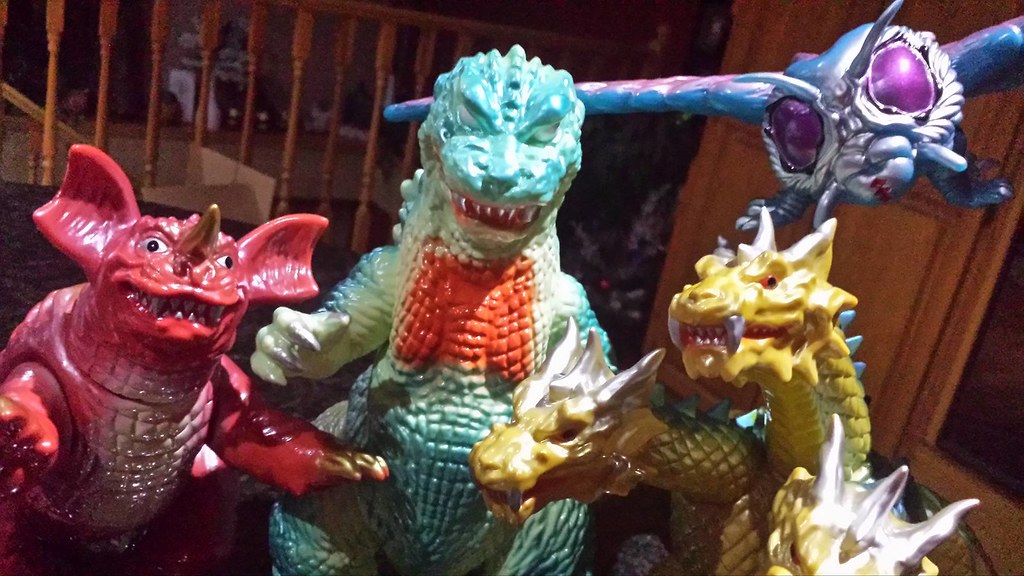 I can't wait to see what you folks all have!

This is the figure that sent me headfirst into collecting stylized figures. So sexy.
Marmit Monster Heaven Man, the GMK Godzilla... where do I begin. Put it into this perspective...

That Bandai figure above, that exact picture, was my first exposure to this suit. I still remember being 6 years old or so, and my dad coming home from work and telling me that he just got a glimpse of "the new Godzilla." All he had was a printout of that very toy in black and white, but WOW did it get me excited. I thought they really pulled out all the stops with this one. I've said it before on here, but I don't think I've ever worried about obtaining something as much as I did when I first saw this figure as a kid. Definitely one of the best Bandai figures. M1 GMK gold custom I completed almost ten years ago.
The solid paint helps show off all the fine texture of the sculpt. 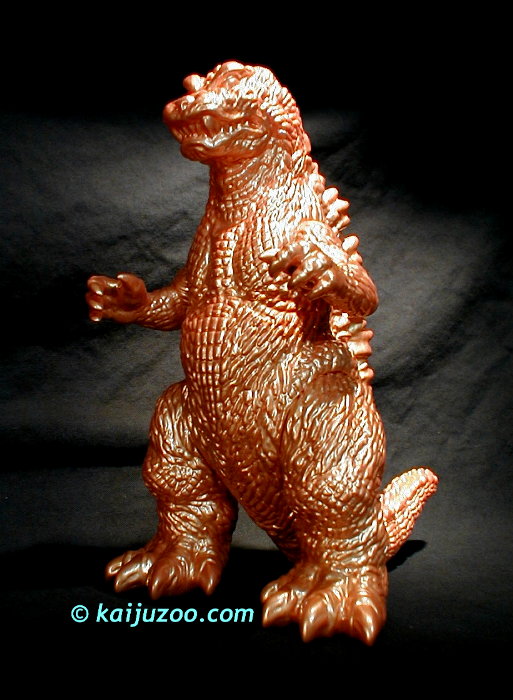 @KlenSeven
I see what you mean about that Marmit, I'd get hooked on that for sure! Such a sexy picture. How big is it compared to the M1?

@Mr. X
Gotta love those mini-figures! And that Bandai Creations looks like ine of the better figures in the line, which is pretty cool. The Bandai Japan, though, is just awesome.

@Creature22
I have the Bandai as well, and it's my favorite of the Bandais that I have. The movie itself was an experience for me because I was a kid and just starting to love Godzilla films, but this one was rented during a really busy week so I essentially hyped myself up for it, pretending to be monsters on the cover and stuff. It didn't dissapoint 5 year old me, to say the least. And I've been hooked ever since. Easily my favorite!

@KaijuZoo
That solid gold really does bring out the figure's stronger points, nice job on the custom!


I just preordered the Yuji Sakai 30cm GMK, it looks like one stellar statue! I can't wait to see it in person.

Another M1GO coming through. Between this and the Bandai, I've never felt much of a need for many more. Tho I do also have the Bandai USA figure. Bandai Polystone Series M-1... i was looking forward to this series since it was from Yuji Sakai, but this figure (which i got MIB) has some serious QC problems... bad slop on the fins and bad slop on the face... i've seen others over the years that looked fine, so maybe i just got unlucky on this one... otherwise, its a nice dynamic figure, destruction and action all in one shot it LOOKS like a Hyper Godzilla 2002... but upon closer inspection, it seems someone used that as a mold and made a rubber version which they then slapped a great paint job on and then added a nice base for it to stand on... it is a really striking figure, and as far as i can tell, its a one of a kind "knock off" that is way better than the original Woah youre right..that knock-off doesn't look bad at all.
Formerly known as kurtzilla

TeddyBaragon wrote:@Mr. X
Gotta love those mini-figures! And that Bandai Creations looks like ine of the better figures in the line, which is pretty cool. The Bandai Japan, though, is just awesome.

The BC isn't bad, but something about it has always felt a little off to me. Mostly little things, slightly odd proportions and paw-like hands. I'd still agree that it's one of their better attempts. The 8" figure is simply fantastic, as are all of the GMK figures they did. Very happy to have the whole lot.

Ah yes. GMK Godzilla. The 8' Bandai figure is my favorite Godzilla figure of all time. Not to mention that I found him at a local DVD/game/thingy store in my local mall for just $25 bucks with the tag. Pretty good deal if you ask me.

The BC GMK Goji was one of my first Bandai Creations figures, and is definitely my most damaged figure. The bottom of one of his feet got burned from one of my friends playing a joke on me (he didn't actually mean for the figure to get damaged) and my brother tore the head off, so the head doesn't like to stay on. It isn't one of BCs best, but I like it for what it is.
Spoiler:

All I have is the 6" Bandai. Though I'm definitely getting the new Xplus when it comes out in a couple weeks.
Rocker, paleo buff, cryptid enthusiast, Dragonball fanatic, and lover of comic book, video game, manga, & anime babes!
Follow me on Twitter, if you dare! https://twitter.com/TLK_1983

TeddyBaragon wrote:@KlenSeven
I see what you mean about that Marmit, I'd get hooked on that for sure! Such a sexy picture. How big is it compared to the M1?

Next week can I please do the next Toy Spotlight Thread? I have have a Kaiju picked out and ready.
Godzilla


In regards to GMK Godzilla, I don't have anything besides the Bandai 8inch figure (which is ok, but definitely not one of Bandai's stronger efforts imho). I don't have any real good photos of it (it's back home in the USA).

Here are some various online reviews of the Xplus 30cm GMK Godzilla figure:

ebirahsmeg1 wrote:In regards to GMK Godzilla, I don't anything besides the Bandai 8inch figure (which is ok, but definitely not one of Bandai's stronger efforts imho).

How so? Wouldn't say it's one of Bandai's "best" but I think it's far better than just "okay". Plus it marked the return of the 8" scale.

The color scheme is a bit uninspired (appears nearly black instead of dark/charcoal gray, and his lower midsection body is bit small/skinny in relationship to the actual film. Again, it's an "ok" sculpt, but Bandai's figures for the Godzilla suits from GxMG/GSOS/GFW were a bit more accurate and detailed imo, and I think even the Marmit Monster Heaven figure captured the spirit of the suit better.
GIANT CONDOR!!!!!!!!

It may not be perfect, but it's definitely the best Bandai I've got. 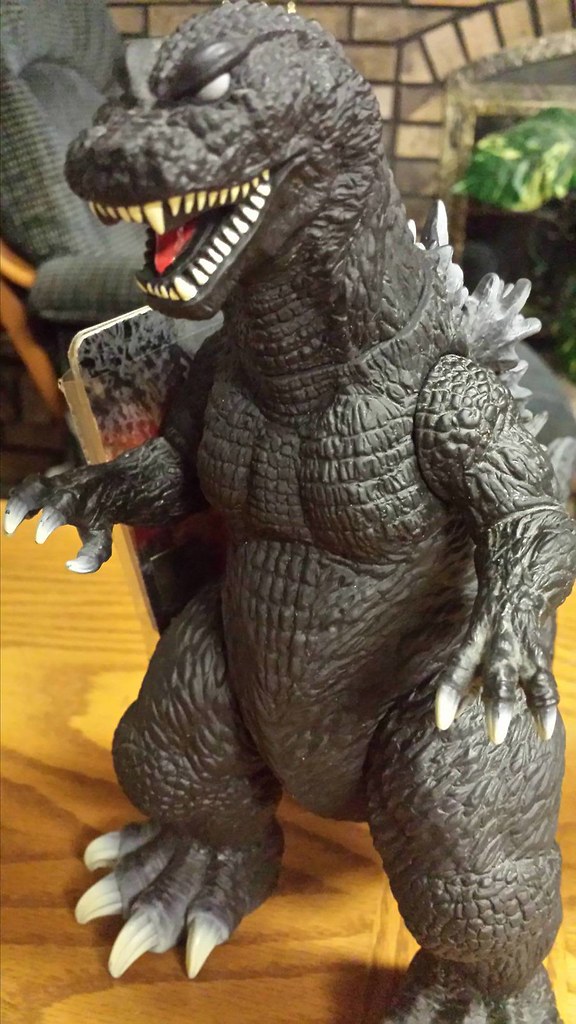 It may not look as fat, but it easily looks as mean!
And I do much prefer the 8 inch scale figures to the 6 inch ones, even the ones that are a bit off. They generally have a larger presence and more detail. So I'm glad GMK brought it back for Bandai. 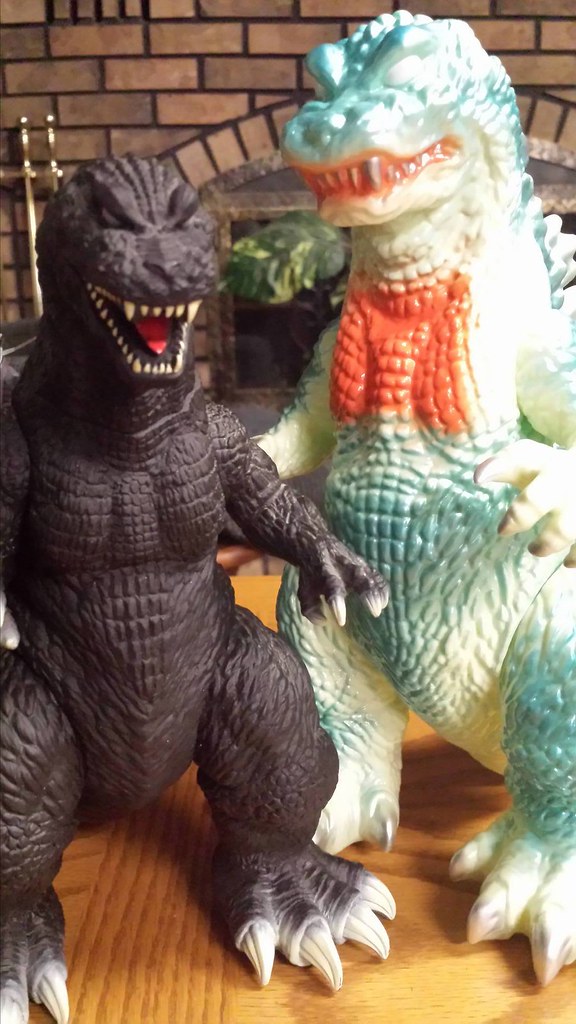 The Sakai will probably end up capturing the suit best, but Marmit and M1 both do a great job of it too.

Does anybody have the CCP? I remember wanting it so bad when it got reissued.

Picked up the 8" Bandai off Ebay for 50 bucks. Not sure when he'll get here though.
Rocker, paleo buff, cryptid enthusiast, Dragonball fanatic, and lover of comic book, video game, manga, & anime babes!
Follow me on Twitter, if you dare! https://twitter.com/TLK_1983

Users browsing this forum: No registered users and 10 guests