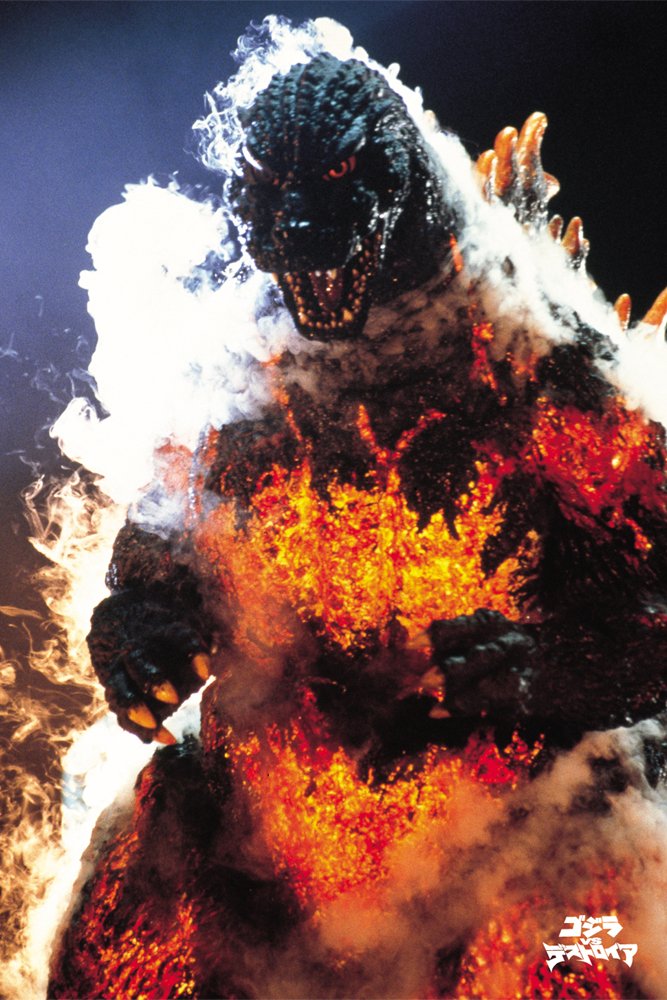 Feel free to discuss anything you may want to say about Burning Godzilla, who has only appeared in Godzilla vs. Destroyah (1995).

No, and if I didn't value my eyesight so much, I'd bleach my eyes so I never had to see that poop again.

Awesome concept, and love the way it looks with smoke filtering from the body. I'm a sucker for stronger monsters, and this fits the bill easily. From the movies, this'll always be the strongest form of Godzilla to me.

I hear people throw the idea around of reviving this concept, but it feels more appropriate to keep it a one-time thing, as interesting as it would be to see future Godzillas with this appearance.

I think Destoroyah has a lot of visual flair compared to most of the earlier '90s flicks and Burning Godzilla augments that decently.
TK's only diehard RMA King Arthur series historian
"All you did was download the ROMs anyway! You can hardly call yourself a real fan!"

I love this design. It has a such a sense of power and it's visually striking.
I can't believe that Godzilla was the only surviving member of its species, but if we continue conducting nuclear tests, it's possible that another Godzilla might appear somewhere in the world again.

It does make Godzilla look stronger, and more terrifying as well. He glows like some kind of lava deity, spewing his atomic ray in anger over the pain he feels. As a way to end Godzilla, it worked well. It provided a plausible and touching death.
Kaiju are just like people- giant, radioactive people.

Burning Godzilla is an interesting design and brought to life well.

Actually a little to well.

When Godzilla appears he looks like he is an agony, his nuclear furnace is going wild and he is in intense overwhelming pain. His body glowing red, steam and smoke pouring out, Godzilla is screaming in torment. And then we have to watch him go through the entire movie like this. He doesn't look powerful, he looks like he is in anguish. It's like a very painful terminal cancer is eating him alive and there is nothing he can do to stop it.

Then on top of this a new monster appears and picks on Junior, like Godzilla doesn't have enough torment already he has to watch is adopted child being killed.

It is actually kind of depressing to watch.
Godzilla Screen Time
http://jokercluster.blogspot.com/

It bugs me how this suit is officially labelled the MogeGoji suit. I know it was modified from that suit, but it is pretty much a completely different suit. Call it the DesuGoji or BurningGoji!!

One of the more strikingly appealing and visually captivating of Godzilla's appearances. The fiery-red and orange colors give him a rather unusual yet alluring sight to the eyes whenever he was on screen.

The coolest appearance of the Heisei era by far at that too.
UNSTOPPABLE FURY. UNTHINKABLE POWER. UNBREAKABLE WILL.

tymon wrote:Man, it really makes me laugh when I remember that all this drama is centered around a fictional, giant atomic monster. Damn you, Godzilla!

Gawdziller wrote:Doesn't matter what's moot or not. We'll just move onto the next thing to skreeonk about, then tangent onto something unrelated and skreeonk about that, and get trollbaited back on topic so we can skreeonk some more. It's the circle of life.

I thought Living Corpse already set up a thread for this version of the character.
Formerly Kaijucole in 2006.

Seems this version is popular even to non-fans, from what I've noticed. Usually when a Godzilla figure is made a Burning Godzilla is almost guaranteed to follow. I can see why it's considered to be so cool, since you're basically taking Godzilla and making him all fiery.

Re: How will Godzilla make his entrance?

The most menacing and imposing variant of Godzilla's appearance. It's amazing that they got the smoking, inflamed design to work so convincingly with practical effects.

GalacticPetey wrote:I love this design. It has a such a sense of power and it's visually striking.

The aura of smoke and constantly glowing helps.

Even Destoroyah's final form has some aura of smoke.

LegendZilla wrote:I thought Living Corpse already set up a thread for this version of the character.

Some hacker deleted the posts of those who had the highest post counts, so my Powers Talkback threads all got nuked to hell and are gone forever. I could do them again but I don't own all the movies and trying to recapture screenshots of every power and remember what my thoughts on the powers were would take forever.

Isn't that smoke pure carbon dioxide? Cause there are multiple stories about the actor passing out cause he breathed in the fumes.
This is the beginning of the end.

BARAGONZILLA wrote:Isn't that smoke pure carbon dioxide? Cause there are multiple stories about the actor passing out cause he breathed in the fumes.

Isn't it Carbon monoxide that knocks you out? Never knew that common dioxide could do that.

Too much CO2 could incapacitate a person. As if the suit actors didn't face enough danger.

To the topic, this version of Godzilla has the second best eyes of the character. Those red eyes give Godzilla a fierce look.
Kaiju are just like people- giant, radioactive people.

As far as I'm concerned, this is and will always be the most powerful Godzilla. Yeah I'm pretty biased.
Tohokingdom's local Wumbologist! It's 1st grade!

This is probably one of the most visually striking monsters in Toho's effects movies. This version of Godzilla is right up there with monsters like Ghidorah, Mechagodzilla, Hedorah, and Biollante. I'm not a big fan of Godzilla VS Destoroyah, but Burning Godzilla was really well done.

To me at least it gives a sense of how powerful this Godzilla truly was. And it comes from my favorite Godzilla movie.
It's not a lake; it's an ocean. - Alan Wake

It's hard to believe how long Burning Godzilla has been known for. We've only seen his breathtaking design once onscreen, which is a good thing. Admittedly, I'm surprised Toho hasn't tried to bring it back, considering the positive feedback it received. Godzilla going into his burning/meltdown state is probably the closest thing we'll ever get to a live-action Super Godzilla. I'm aware we've seen our fair share of supercharged Godzillas over the years, like Final Wars Godzilla, but Burning Godzilla is in a league of his own because of his legendary appearance. One look is all you need to see that this is a Godzilla that has truly become a living nuclear weapon and is virtually unstoppable.

Maybe we'll see Burning Godzilla return someday. If so, I hope they do his return justice, or at least respect the idea itself, because it holds a special place in the series. Personally, I'd prefer if they didn't; they're better off coming up with new ideas, which is ultimately what brought us Burning Godzilla in the first place.
Monster Sightings Video: GHIDORAH | King of Terror!
“Everyone, deep in their hearts, is waiting for the end of the world to come.”

Burning Godzilla was an excellent version of the character, but using it in a story would require the right storyline. G vs Destroyah had the storyline to make it work. You'd need another narrative that makes this version of Godzilla make sense and uses its powers to full effect.
Kaiju are just like people- giant, radioactive people.

Megalon went into a bar and saw Gigan. Megalon said, " Again? I thought you gave this up."
" What can I say," Gigan asked. " I'm hooked."
Post Reply
23 posts